Why did you make this work:
I was invited by the publisher to write and illustrate a one-page comic story with a Halloween theme. I loved the idea of a demon girl character who is a fish-out-of-water in the underworld. She has no time for anything nasty and evil and in contrast to the denizens of Hell, she's an almost unstoppable beam of sunshine. BUT!.. Her happy, do-gooding intentions have inadvertently horrific outcomes!

How was the illustration used:
A one-page comic story in the Monster Fun - Halloween Spectacular anthology comic for kids

How did you make this work:
I worked on the text and sketched out the main character, Helly first. After feedback from the art director, I roughly sketched the panels until he was happy with the layout. I ‘inked’ the artwork traditionally, using black pen on board which I scanned and then coloured digitally, using Photoshop. I used a bold and fairly limited colour palette to reflect the fiery depths of Hell!

Biography:
Chris is an illustrator and also works in the animation industry for TV and Film, enjoying various roles from creating, show running, executive producing, writing, directing and art directing, to storyboarding, character design and background design. He's the co-creator of the animation series, 'Pinky Malinky' and a new interactive Netflix original film, 'We Lost Our Human', soon to air. 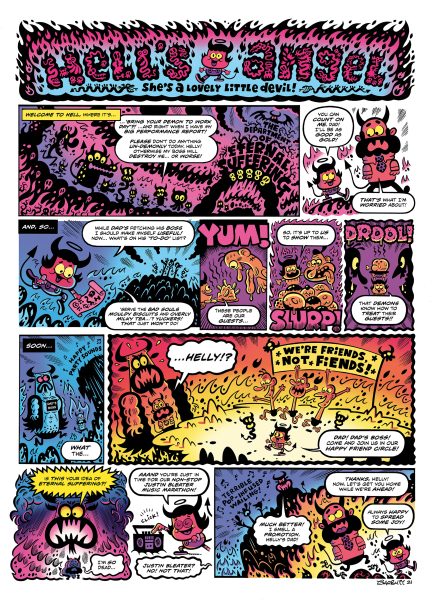