Usage: A set of six stamps for Royal Mail.

Process: The conceptual stage involved sketches to find the right composition for each novel. The final images for artwork were drawn in Photoshop.

Formats: The original artwork exists as photoshop files. These were subsequently printed as stamps.

Brief Requirements: The brief called for images that focused on the pivotal moment of Agatha Christie crime novels, with conceptual visual twists, to be reproduced as a set of six stamps. All illustrations had hidden elements and clues, utilising micro text, heat sensitive and UV inks. In keeping with the subject matter, the aesthetic of noir and early/mid 20th century design were also a consideration.

Key Brief Ideas: The whole process was a collaboration with Neil Webb, Studio Sutherl& and Royal Mail Stamps and Collectibles. Jim Sutherland and Neil Webb spent the initial stage sketching and paring down the elements of each scenario to define each composition. In order to convey a sense of drama and mystery, visual twists in the action, people, landscape and objects were considered to ensure they would read at the small scale of a postage stamp. 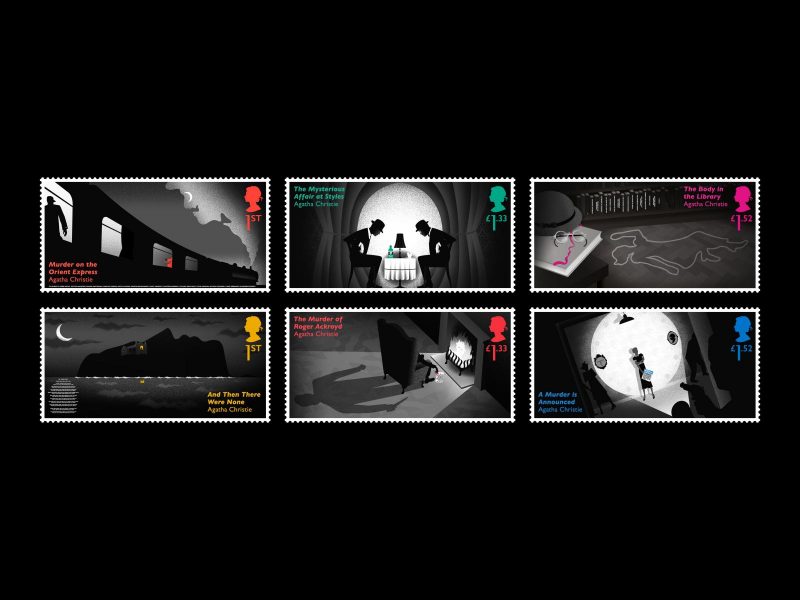