Merav graduated from the Bezalel Academy of Art and Design in Jerusalem where she now is Head of Illustration Studies at the Department of Visual Communication. She started her career as an illustrator in New York in 1993 before returning to Israel in 1996. Her work has been published in The New York Times, New York Magazine and The Village Voice.

Merav is based in Tel-Aviv, Israel and you can see more of her work at meravsalomon.com

Frostbites is a series of images that inspired an illustrated book for adults, which uses a juxtaposition of text and imagery to explore the artist’s fragmented memories of her German grandparents.

The judges commented that they liked the freshness and individual style of the book. Modest in size and an enjoyable object to hold, the content is original, quirky, self assured and humorous with so much happening visually that the reader cannot help but revisit it.

The following is an excerpt from an interview with Merav featured in the awards issue of Varoom magazine.

BRIEF: I was very lucky to be invited to publish my book Frostbites (Frostbeulen) with the Tollen Hefte Illustrated books series. I was given complete creative freedom to construct my visual and poetic vision. I wanted to create a brutal and grotesque atmosphere as a visual echo of my memories of my late grandmother's persona. I also wanted to untie the direct classic affinity between text and image, in order to allow an associative reading and viewing experience. I worked closely with Armin Abmeier and Sussane Berner, the Editors of the series, on adjusting the book to the Tollen Hefte strict format. All of the Tollen Hefte books are 215x130mm in size, have 32 pages and use 4 special hand separated colours. The books are printed on an Offset printer, and manually bind. Each book also comes with a poster folded inside.

MATERIALS: Most of the illustrations started as acrylic images, which were then transformed into a pencil image on draft paper, scanned, and then coloured in Photoshop. It was a translation mission, and it was a great fun. It gave me a fresh point of view on my work. A little bit like when you look at your illustration in a mirror. I also made different patches of backgrounds in pencil, which I used later on when I constructed the separated layers together.

RESEARCH: The visual world in the book is based on old photos of my late Grandmother from her photo albums. Some images came from the collective visual memory from where I come from. In addition to those references, there is quite a lot of influence from Heinrich Hoffman's notorious children’s book classic Straw Headed Peter (Der strawellpeter), which I grew up on. In the design stage of the book, we used the futura typeface as a tribute to the German Bauhaus school.

PROCESS: The text came later. First came the images. Clear and surreal. Wacky and cruel, colourful and distressing. The complete series of illustrations, dealing with the barren effort of stitching the fragments of my Grandmother's life story, was created in a series of “seizure” like work attacks resulting in about 18 acrylic on paper images. At that stage the project progressed from a “personal project” into a solo art gallery show at the Erlich Gallery in Tel Aviv. By then it was already named Frostbites. But I wasn't satisfied. From the beginning I had a very clear vision that it should be an Illustrated book. Illustrated books are the form of expression I mostly work in. I see it as an exciting form of Art that allows me to synergize content, images and format. In order to fulfill my vision I made a sample of the book I had envisioned, using the illustrations from the exhibition, and sent it to a few friends. After a few months I got an email from Armin Abmeier, the founder and Editor of the Tollen Hefte Series, asking me whether I would agree to re-illustrate the whole book, to fit into the series format (I did not know him then, though I have admired the Tollen Hefte series for many years). I said – YES! – and started the process of translating the book from one visual language to another. I also had to adjust the image composition because the layout proportions had changed.

RESISTANCES: The hardest part, to be honest, was to find the right partners to publish the book, a partner that shared my vision for visual poetics and illustrated books. During the early stages of the process, I found the hand separation quite challenging. I had to re-vision the paint and brush illustrations in 4 colours only. It took me 2-3 illustrations to get the hang of it, and from there on I only saw the world in 4 special colours. On the other hand I found it wonderfully liberating to do the separations manually. It gave the whole process a new mysterious suspense to how things would eventually look.

INSIGHT: “Stick to your dreams…”, “Believe in yourself…”, “You are not alone…” All those corny cliches are true! I was very fortunate to find the right partners in the form of Armin and Sussane, and the Tollen Hefte series in Buchergilde Gutenberg in Germany, that shared my vision and my ideas on Visual Poetics and hence enabled me to materialise my dream and publish my book. It is a very interesting era to be an illustrator. When I stepped out of college with my fresh portfolios, most of the work for young illustrators was in editorials and children's books. If you wanted to work somewhere you had to go there and live there. Now all the distances have shrunk, the web and internet make almost anything within reach.

DISTRACTIONS: I don't know if this is the place to mention it, but last July Armin Abmeier, the Editor and founder of the Tollen Hefte series, passed away. It is a terrible loss to the many many people and artists and publishers and editors who knew him and appreciated him, and to the Illustrated Books community. His legacy still lives and will continue to live through the art and books of many talented friends. Frostbites was the last book he edited.

NUMBERS: Frostbites is the 37th book in the Tollen Hefte series. It includes 32 pages, 10 short pieces of text and 13 images. When closed its measurements are 130 mm wide on 215 mm tall. All the images were hand coloured and hand separated in 4 special colours (Pantone colours 307, 7406, 186 and Black). In the book's illustrations there are 10 different references to animals, 6 cut heads, 10 hairdos, 10 trees, 5 references to water, and 3 to fire. 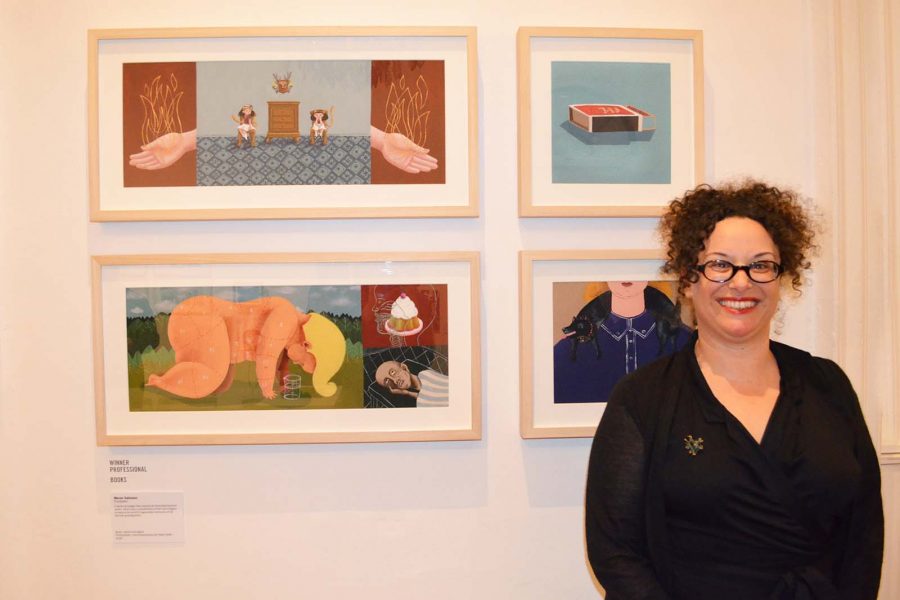 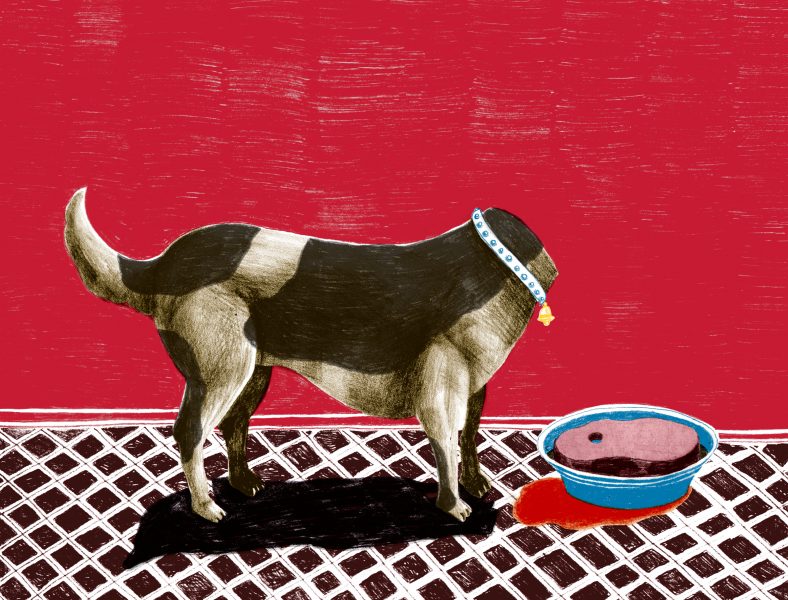 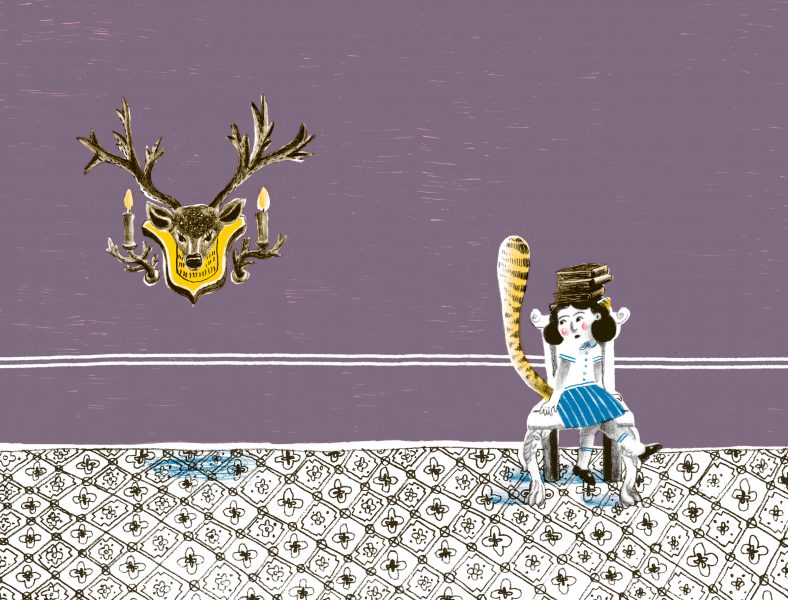 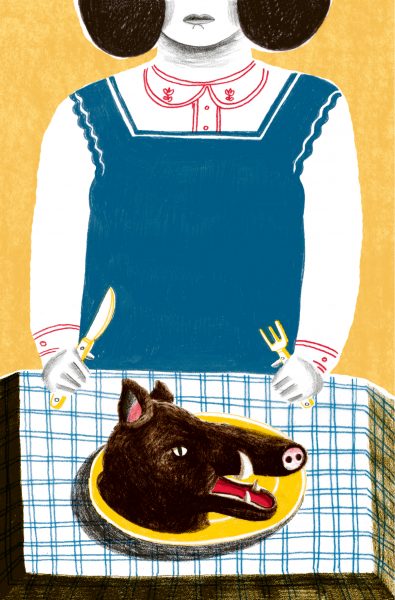 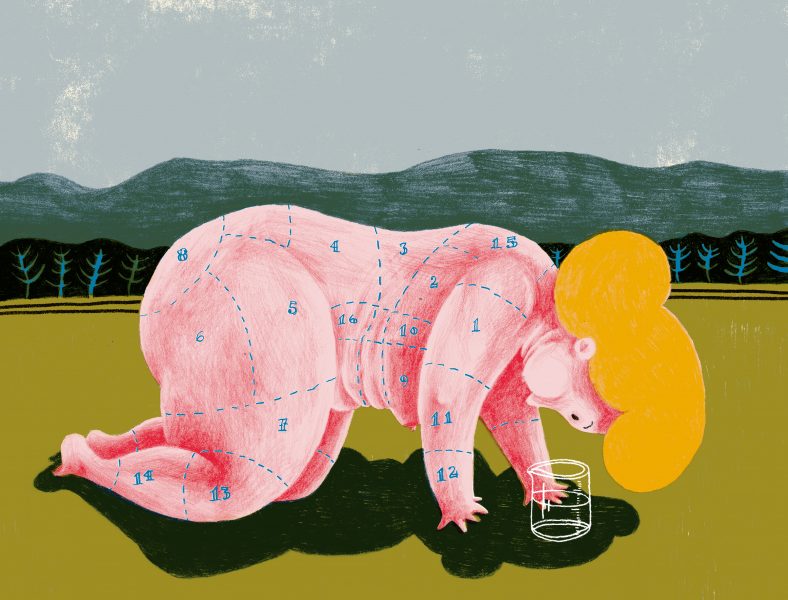