Louise has worked as an Illustrator since graduating from St Martins School of Art with an MA in Illustration for a wide variety of clients in the UK and worldwide across all areas. Amongst others her clients include the Royal Mail, CDP advertising, The Ministry of Sound, Random House, and Time Out London. Her work has been discussed in many anthologies and journals. She works in her studio in London Fields Hackney.

“Afternoon Nap was produced as an image for the brochure of the Illustrative 2010 Berlin. I wanted to create an un-stereotypical response to the theme “British Urban spaces” by depicting a truly British moment. I wanted this image to have a dreamlike quality, be slightly unnerving with no obvious narrative, and one where the viewer is invited to finish the story.”

“Winning the Award was a great feeling, and a good talking point with clients. The show at Somerset House was a really enjoyable night. A great chance to meet friends and work colleagues, all the more so because it gave me the opportunity to have a chat with Andrew Conningsby, from Debut art who shortly after began to represent my work.”

BRIEF: To respond to the theme of British Urban spaces for the Illustrative 2010 brochure/ exhibition.

MATERIALS: The artwork was painted with Golden acrylics on primed cartridge paper.

RESEARCH: I have a huge photographic resource in my studio full of photographs I have taken over the years. As soon as I received the brief I knew it was the opportunity to produce a painting I had wanted to do for some time based on a particular scene shot in Brighton.

PROCESS: A large photographic print was produced for reference; the relevant areas from this were then mapped out onto paper according to a pencil rough.

The painting was then worked up in layers from light to dark, leaving the finest detail to the final stages.

RESISTANCES: There was no critical input except my own. Once I had the idea it was only a matter of sketching out the composition and deciding on a colour palette, then getting started. It was a completely un-art directed process within their deadline.

INSIGHT: If I have no concrete deadline then paintings always takes longer, as the temptation to continue working on a piece is quite strong. Also during this time other jobs came in which meant the painting then got put on hold until they were finished. That said at times it was beneficial to take a break and then start again with a fresh eye.

DISTRACTIONS: Once I actually get settled in the studio and get started there aren’t that many except making continual cups of tea and checking e-mails. Although there is always the temptation of an extended lunch or coffee break, if I can convince myself I deserve it, as London Fields has a plethora of cafes.

NUMBERS: 1 trip to Brighton 2 and a half years before, photographed 1 tower block, 1 old couple, 5 beach huts to make 1 painting.

FINAL THOUGHTS: I enjoyed everything about making this image, from taking the photo to painting the image and seeing it exhibited and printed in the catalogue. Winning the award was the cherry on the cake. 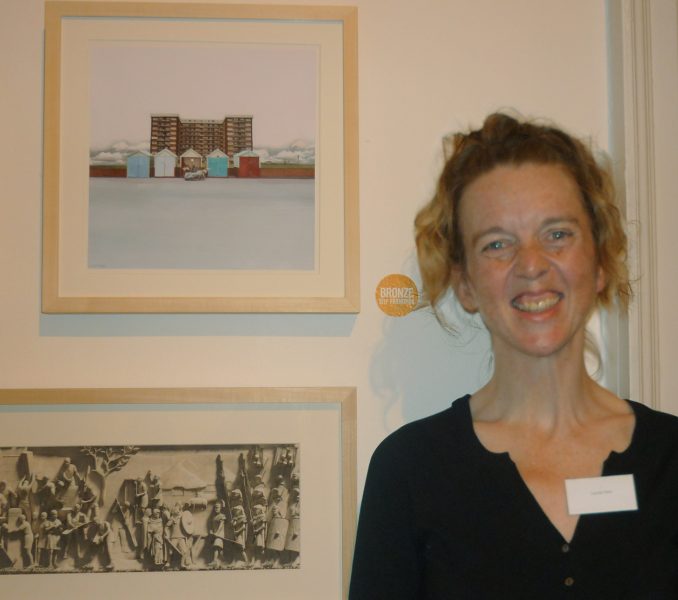 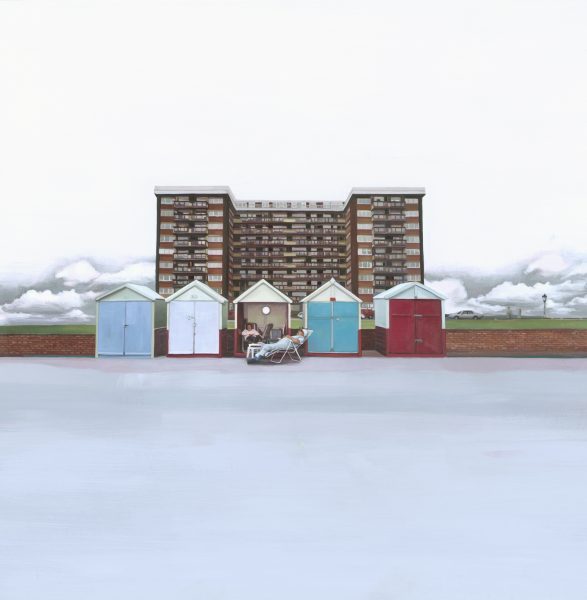