Nigel has worked for most of the major UK daily newspapers while also working for other major editorial clients in the UK and the US such as New Scientist, The Lancet, etc. For Nigel, editorial work is one of the great challenges for an Illustrator. “The fast turnaround and conceptual nature of the brief can push the Illustrator to their limits but the experience can be hugely satisfying.”

Clear Waters Rising was the second book cover Nigel had produced for the writer and broadcaster Nicholas Crane. The image was produced while he was resident at the ‘Big Orange’ studio.

“Both awards helped to reassure me that the move from traditional to digital was the right decision. It also allowed me to meet a personal hero of mine, Peter Blake when he presented me with my certificate. The Silver and Bronze awards naturally encourage me to aim for the Gold Award. I am yet to achieve that feat. I will keep trying…”

BRIEF: Produce the paperback cover of ‘Clear Waters Rising’, a travel book written by Nicholas Crane about his seventeen-month journey through Europe from Cape Finisterre to Istanbul.

RESEARCH: I trawled through reference material that came from a shared library of books and magazines in the studio that I rented (Big Orange). A number of photographs of the journey could be sourced through the website that accompanied the project. I guess this was an early example of a blog.

PROCESS: This illustration is an early example of my (at the time) newfound interest in digitally producing my work. For the four or five years prior I had been generating my work as full colour reduction lino cuts. I had started to pick up quite a lot of work in this medium, particularly in the US. Due to the time required for inks to dry and the labour intensive nature of this process I began to recreate the same printed qualities by layering and colourising printed textures that I had produced. A side effect of this was that I began to become interested in line again. There were clear benefits in terms of any changes that an Art Director might require compared to the difficulty of changing a lino cut. This had been a major headache on a number of Fed Exed US jobs just prior to this commission.

RESISTANCES: I still have some reservations about the figure on the front (Nicholas Crane). At the time I was struggling to develop a consistent approach to the figure. Versions of this bookcover that appear in my portfolio show a slightly different, more silhouetted version of the character.

INSIGHT: It was a revelation in terms of how quickly I could produce work that looked quite similar to the traditional print technique that had been so successful for me. This project introduced me to the considerable levels of control that come with Adobe Photoshop. This by and large has been a good thing but can occasionally stifle the happy accidents that we all crave occasionally.

DISTRACTIONS: Music, both listening to and playing has always been a distraction.

FINAL THOUGHTS: This job lead to a number of similar journey/landscape based book cover commissions. 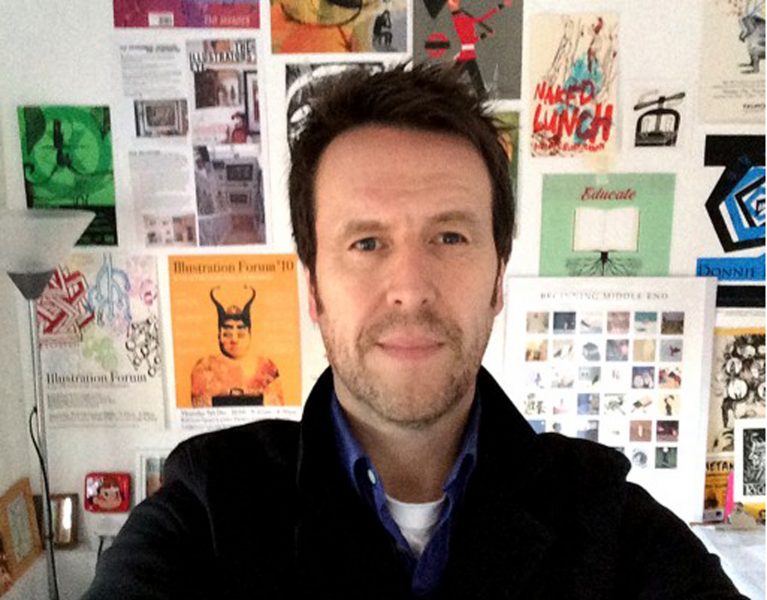