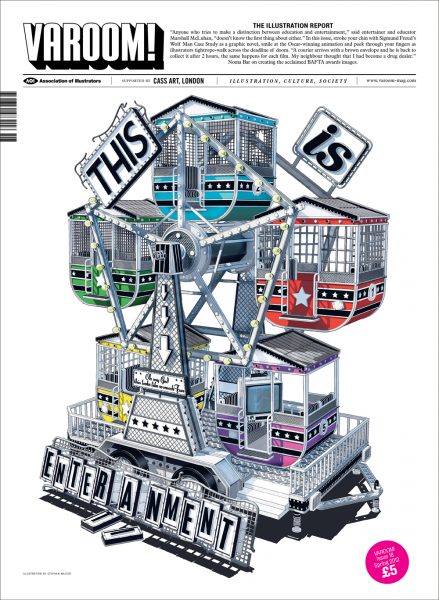 Issue 18 of Varoom celebrates the work of illustrators who entertain whilst asking questions about entertainment. From Moonbot Studios elagaic animation about books, to the BAFTA illustrators whose single images of movies act as illustrative film criticism, to cartoonist Huw Aaron who “performed” drawing at a cartooning festival. Plus the “architecture of things” – Stephen Walter invites us into Varoom 18 with his entertainment inspired cover. Step right up.

The BAFTA book given to members on awards night has become a highly collectable item, helped by the set of images created by a different illustrator each year. John O’Reilly hears from the designers, commissioners and illustrators, Noma Bar, Tavis Coburn, Adam Simpson, and Eda Akaltun, on the time-limited challenge of creating five unique visual interpretations for cinema’s most discerning audience.

THE APP, THE BOOK & THE OSCAR WINNING MOVIE

Moonbot Studios’ Oscar winning animation and critically acclaimed app The Fantastic Flying Books of Mr. Morris Lessmore, is a celebration of the experience of books. Nicholas Blincoe talks to the young team at this small Louisiana based studio.

THE DEAL: SELLING THE GRAPHIC NOVEL TO HOLLYWOOD

Comic book creators were once inncents abroad in pitching and selling to Hollwood. John Lowe gets the inside story on new business models giving commercial power to the graphic novelist.

There are cosmic questions – “Which came first, the chicken or the egg?” There are existential questions – “Why did the chicken cross the road?” now animation director Grant Orchard has added to the pantheon of life’s important questions with his universally acclaimed prize-winning shortA Morning Stroll.

“Where do chickens go for a walk?” is a question Orchard answers in deliciously inventive style. Or ‘styles’

In a fast-moving media world Stephanie Black’s Peer-Reviewed paper explores how forms of illustration provides a truly engaging sense of time. Black argues that developers of New Media may want to look to older forms of navigation in media, such as books which can engage readers in much richer ways, encouraging the dialogue and conversation that newer media often only gesture to.

Marion Bantjes’ fantastic work graces the centre of Varoom 18. Her typography and use of colour perfectly suited to the subject of entertainment.

Varoom 18 is available from the AOI shop. 64 pages of great images and insightful comment. See the world in a new illustrative light.