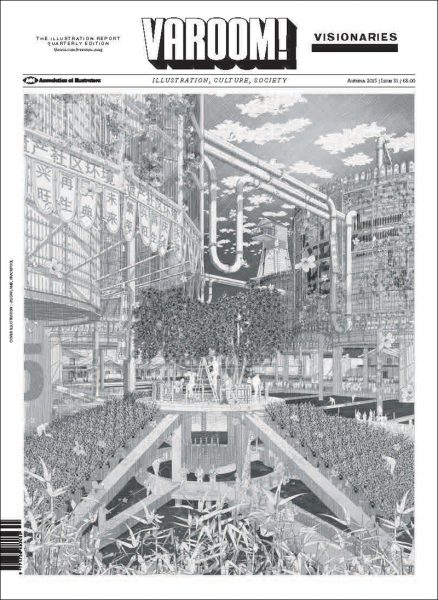 In this issue Marion Deuchars speaks of the line that connects her with Quentin Blake, Ardizzone, Lear and Cruikshank all the way back to the use of text and images in the Illuminated Manuscripts. Also featuring image-futurism in Architecture, the Epiphany as a powerfully affective journey of learning (with Marion Deuchars, David Hughes, Oliver Jeffers and Olimpia Zagnoli), how Illustrators are rising to the challenge to visualise and explore science in astonishingly imaginative ways, graphic novels and children’s books.

This issue of Varoom is a celebration of creative diversity whether you’re channeling a 5th Century illuminator or making GIFs.

There’s the Christian notion of epiphany as divine revelation, the secular epiphany as rational insight, and then there’s epiphany as moment of learning and transformation. Olimpia Zagnoli, one of the illustrators we asked to locate an epiphany in an other image-maker’s work, describes her epiphany as making her “blood become sparkling”. The epiphany is a powerfully affective journey of learning. Explore the epiphanies of Marion Deuchars, David Hughes, Oliver Jeffers and Olimpia Zagnoli.

From the children’s book as information environment, to the idea of expanded illustration to Stuckness and the hostess trolley, the VaroomLab 2015 conference sought, fast sharply constructed ideas for its Pecha Kucha presentations. Aidan Winterburn, Alice Moloney and Jo Hassall re-imagine some familiar visual and professional forms

Shane Walter selects a recent stand out project from Universal Everything: Light at the Opera was the audio-visual takeover on Sydney’s iconic landmark Opera House sails. And highlighting Sequential Art, Martin Colyer choses David Hughes’ graphic novel, The Pillbox: “It presents a chilly version of an English seaside holiday, wrapped around a depraved murder mystery from 1945, involving American troops stationed nearby.”

As always, Marian Bantjes’ Varoom centerspread is a visual feast. For Visionaries, glass eyes look around through dazzling angles of holographic foil. Paul Davis witnesses ‘The King of Kenya’ in a curious yet uplifting encounter on the 243 bus, and in I Wish I’d done This, John O’Reilly is transfixed by Graham Fink’s images drawn with his eyes via eye-tracking technology.

Varoom 31 is available from good book stores and the AOI Shop. 64 pages of great images and insightful comment. Find the Vision.