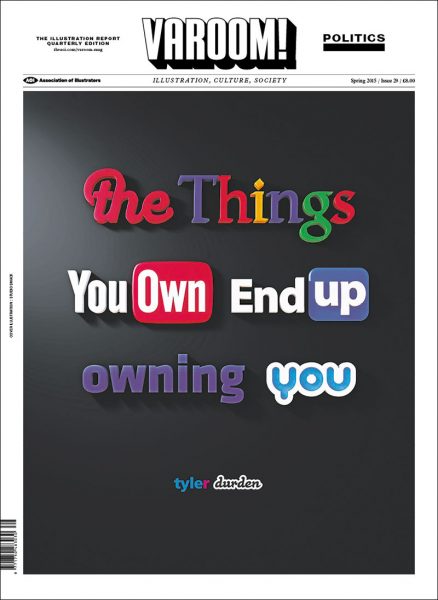 One of the ideas driving this issue of Varoom is that ‘politics’ and illustration has multiple, alternative lines of thinking, subject matters and ways of expression. Issue 29 builds on this with a range of approaches, which includes the illustrators who were bucking against prevailing illustration trends in 1981 to forge a new direction, the experimental directions for three fashion illustrators and an animated fictional propaganda of North Korea’s guide to the USA.

Our cover image by Studio Stack moves Fight Club‘s Tyler Burden’s rage against the system into the digital age via the logos of the corporations that harvest our information and extract value from it.

The political cartoon is becoming animated and its content is becoming broader as webzines explore the possibilities of visual storytelling. In a frank series of interviews, Jen Sorensen, Liza Donnelly, Mark Fiore, and Molly Crabapple tell Varoom about the changing forms and contents of the political cartoon in the 21st Century, and how they see it evolve in the future.

From The Drone Survival Guide to role-playing an immigration officer in a video game, Dennis Elbers talks about innovative ways of engaging the public with thought provoking design and outdoors installations, in addition to new directions in politics and the image.

You might be surprised at the extent to which children’s books are removed from US public libraries. We hear the reaction from illustrators and writers Henry Cole, Stern Nijland, Linda de Haan, Adam Rex, Amy Timberlake, as well as Tony Ross and Jeanne Willis who didn’t even know Big Bad Bun had been challenged.

In the world of controlled fashion cool, Zoë Taylor explores playful and experimental visualisations through a series of interviews with Helen Bullock, Damien Florébert Cuypers and Florence Shaw.

Several years ago, Andrew Foster and his wife had three consecutive miscarriages. Foster’s Labour of Love show is a visual account on the experience, as well as a “space to play with his three imaginary children.”

Varoom 29 is available from the AOI Shop. 64 pages of great images and insightful comment.