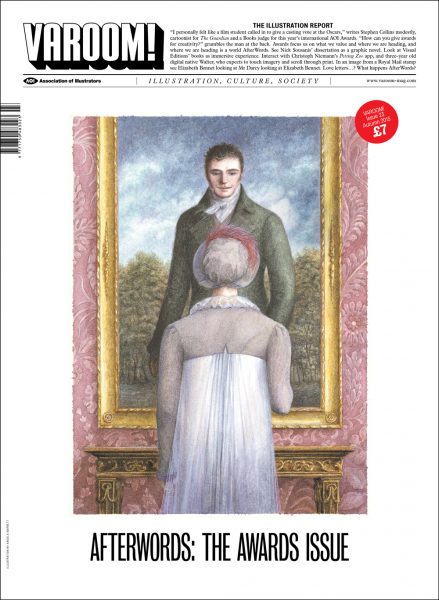 Varoom 23: AfterWords: the Awards Issue spotlights a dramatic shift in our society and culture. In a world of Instagram, Tumblr, Facebook and YouTube our communication and interaction is shifting from words to images.

This unique, must-have issue reveals the best international award winning images you’ll need to see in 2013. Celebrating the Webbys, Angoulême Prix Revelation, V&A Illustration awards, the BAFTA short animation Winner, the Caldecott Medal winner and the AOI Illustration Awards – the world’s most comprehensive award for illustrators highlighting image-making in areas from Children’s Books to Knowledge and Research to Public Realm. We also offer up the Varoom Magazine Cover of the Year.

Judged by an esteemed panel of experts, the Illustration Awards celebrate the diversity of illustration in 2013, across the eight categories. All the winners discuss their artwork, the process behind it, and what ‘AfterWords’ mean to them. “Things you see in your brain,” says Children’s Book winner Levi Pinfold, “go out to do things and meet people, without you,”

In a world increasingly functioning via pictures and picture-making, illustration finds itself at the centre. Lawrence Zeegan has a light-bulb moment with Christoph Niemann’s Petting Zoo app, and a vision of where the discipline is heading. All helped along by a three-year-old.

In a topical survey of magazine culture, Jeremy Leslie’s new book Visual Journalism in the Digital Era charts the changing terrain. John O’Reilly talks to the author and explores the changing balance between words and pictures.

Nick Sousanis is currently doing a PhD in Education at Columbia University, New York. Exploring different kinds of intelligence beyond the verbal, he is presenting it in the form of a Graphic Novel. This work exposes the limitations, the ‘prison’, of ‘Flatland’, a one-dimensional way of seeing, putting the case for other perspectives, other ways of understanding the world beyond words. How did he get away with such an ambitious idea as a comic book dissertation?

Anna Gerber and Britt Iversen set up Visual Editions to “champion books both on and off the screen that tell stories in a visual way, making for new kinds of reading experiences. We call it visual writing.” When in 2010 they published Jonathan Safran Froer’s Tree of Codes, The New York Times said, “Froer’s latest book… takes the integration of writing and design to a new level.” Their latest book Where We Are takes the form of a series of maps

You know that feeling when you connect with a piece of work? For Varoom 23’s I Wish I’d Done This Jon Klassen selects ‘How Well Can We Know Ourselves?’, an an amusing and insightful editorial image by Laura Carlin for Financial Times.

Angela Barrett’s atmospheric illustration for Pride and Prejudice, emphasising communication without words, graces the cover. It was commissioned by Royal Mail for a Jane Austen stamp.

Varoom 23 is available from the AOI shop. 64 pages of great images and insightful comment. Who needs words?