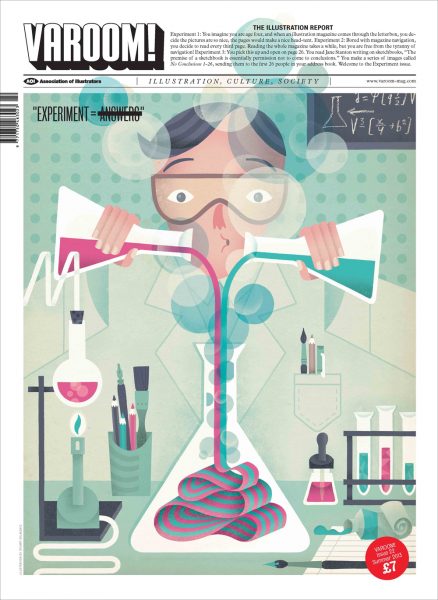 In “7 Thoughts on the Cult of the Sketchbook” Jane Stanton writes that the point of the sketchbook is it gives you permission not to come to conclusions. In “The New Wave Sci-Vi”, Bryony Quinn argues the power of the new scientific imagery is as a medium greater understanding – rather than understanding’s final destination. Marian Bantjes’ turns the sterility of the scientific experiment into an object of beauty, while Laurie Britton-Newell and Ligaya Salazar reflect on Memory Palace, the new V&A illustration exhibition that’s a Walk-In Book, “What does it mean to ‘read’ a story? How far can you push the format and still call something a book?” We wanted to write something conclusive about experiment, but creative experiment means no conclusions.

Modern scientific argument is primarily delivered in the written word – but that was not always the case. ADRIAN HOLME explores the moment in history when visual argument, and the rich use of illustration in the field of ‘Alchemy’, disappeared from the field of science. How can science, and our understanding of it benefit from using the image?

The surge in science exhibitions, science-inspired visual books and the visualization of hot-button science issues in newspapers and magazines begs questions. BRYONY QUINN explores the expansive new relationship of imagery and science.

As major new exhibition is launched at the V&A museum in London experimenting with text image, the curators LAURIE BRITTON NEWELL and LIGAYA SALAZAR, explain how the show is a window on the future of reading.

SIX WEEKS OF HELL; A TEST-BED IN IMAGE-MAKING

The Visual Research course at RCA run by ANNE HOWESON and CATHERINE ANYANGO – supported by ANDRZEJ KLIMOWSKI, stretches students and the idea of drawing itself, to its limit. Howeson and Anyango give an exclusive window on an experimental six-week process that has some students complaining while others come back for more.

SEVEN THOUGHTS ON THE CULT OF THE SKETCHBOOK

The ultimate insight into the creative mind? A necessary response to digital culture? JANE STANTON analyses the surge in books about sketchbooks and unpacks how creatives have used this experimental tool.

The promise of new technology is that it simply makes creative process simpler, easier, faster. But ANDREW HALL explains how a project teaching drawing students how to code transforms our relationship to technology, image-making and notions of creativity.

The first poster work of TADANORI YOKOO recent went on sale in New York fetching a tidy sum, reports John O’Reilly. In typical 1960s style mythmaking, his longevity could only be guaranteed by the poster in which the image-maker announced his own death.

MOTION: Shane RJ WALTER choses FIELD, a hackney based studio led by co-founders Marcus Wendt and Vera-Maria Glahn, who’s Energy Flow is a very modern ‘film’ masquerading as an app: a pure experiment in graphic animation, non-linear narrative storytelling with generative software and a multi-layered aesthetic at its core.

CHILDREN’S BOOKS: KATHERINA MANOLESSOU singled out Anton Van Hertbruggen’s series of sophisticated and nostalgic illustrations for The dog Nino didn’t have at 2013 Bologna Children’s Book Fair and also shows Sun mi Park’s poetic The Thorn Mountain which received an Opera Prima mention at the Fair, “It is a wordless book about a transforming plant (half cactus, half city) and it challenges our preconceptions of what a children’s book is or should be.”

REPORTAGE: DEREK BRAZELL selects Rachel Gannon, who has built “a personal view of the impersonal” through a series of sketchbooks during a residency at Luton Airport situated outside London. “Reportage illustration is very like ethnographic fieldwork,” she says, “Except rather than writing in a notebook we draw in a sketchbook.”

KATIE SCOTT, featured in The New Wave Sci-Vi and NATALIE KAY-THATCHER of the Jiggling atoms science illustration project reflect on the growing relationship of science and image-making in One On One.

You know that feeling when you connect with a piece of work? In Varoom 22’s I Wish I’d Done This CHRISTOPH NIEMANN selects ‘Kaboom’, an editorial image by Tomer Hanuka from New York Magazine.

Varoom 22 is available from the AOI shop. 64 pages of great images and insightful comment. Why not choose to Experiment?