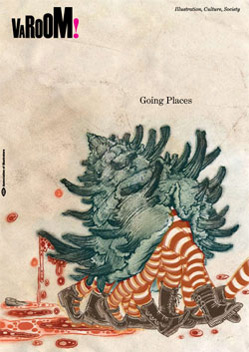 POSTCARDS FROM…  Illustrators and authors indulge in some A6 sized nostalgia by recreating the postcard. From the image, to the stamp, to the postcard voice, all available space was explored with some interesting results. Artwork from Paul Davis, Tanya Ling, Bill Bragg and Noma Bar.

INSIDE OUT A journey into the past for Derek Bainton explores the relationship of art and illustration, Sendak and Hopper, and the hidden meanings of windows.

THE ARMS OF SARAH MALCOLM  W. John Hewitt digs deep into two almost identical images of a killer by Hogarth – a print and a painting. Hewitt explores the relationship between reportage, illustration, art and money.

MY SPACE  In their work, on their blogs, and now in the new range of illustrator-owned shops, illustrators have a rare skill of making you feel at home. NoBrow, Kavel Rafferty and Jack Teagle tell us about a world that blends friendship, craft and commerce in a philosophy unique to illustrators.

ANATOMY OF A DISASTER  Public anger in the US over The Gulf oil spill generated anger partly fuelled by a sense of powerlessness. Ann Field talks to three illustrators whose images for newspapers and magazines helped to portray the disaster and move the news agenda on.

I WISH I’D DONE THIS  Oliver Jeffers, creator of The Boy Who Ate Books and new book The Heart In The Bottle, explains how his discovery of painter Mark Tansey changed the direction of his own work.

HOMAGE  Ty Mattson talks to Varoom about his poster designs for the cult TV drama LOST. Initially created as a personal project, due to their Internet popularity, ABC TV eventually put the posters on their site.

HOME AND AWAY  Yuko Shimizu and Catalina Estrada, who left their home countries to forge new lives elsewhere, discuss their success and reveal the creative inspirations they brought with them, and those they left behind.

BEING THERE  Jorge Colombo produces digital illustrations on the tiny screen of his iPhone. Allan Drummond catches up with him and finds out what turns Colombo on about this new media app.

Varoom 13 is available from the AOI Shop