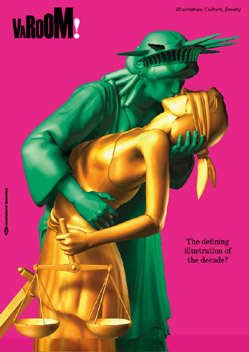 ILLUSTRATIONS THAT DEFINE THE DECADE Varoom asks the experts to choose the illustration that defined the decade in their world, with contributions from Mark Porter – The Guardian, David Bowden – Zip, Shane Walter – One Dot Zero and Françoise Mouly – The New Yorker.

WOOF! ILLUSTRATION DEPRESSION AND CREATIVITY  Ever since Durer illustrated the artist as a ‘melancholic’, depression has been intimately connected with creativity. Varoom examines work by Mike Mills and Matthew Johnstone (new illustrated self-help book – Living with a Black Dog).

THE ART OF THE DOODLE  Do doodles really matter or are they just… doodles? Varoom looks at Samuel Beckett’s manuscript doodles, and talks to Des McKinnnon about her exploration of doodles and her new doodlezine.

A CONVERSATION WITH BARRY BLITT Steve Heller gets an exclusive interview with the New Yorker illustrator, most famous for his controversial campaign cover of the Obama in the White House.

MANIFESTO  Young illustrators show their work alongside the revolutionary ideas behind it! This issue INK Illustration declare ‘We have no preconceived boundaries for our illustration. We see no limits.’

SOMETHING OLD, SOMETHING NEW, SOMETHING BORROWED, SOMETHING DREW…  This issue we get a snapshot of Michael C. Place/Build. Place worked with The Designer’s Republic before setting up Build in 2001. He is a graphic designer and illustrator, whose work often begs the question about the difference between the two definitions.

NOTEBOOK A comprehensive overview and preview of exhibitions, events, talks books and exclusive extracts. Interesting stuff to dip into.

Varoom10 is available from the AOI Shop