VAROOM 09  the journal of illustration and made images – April 2009 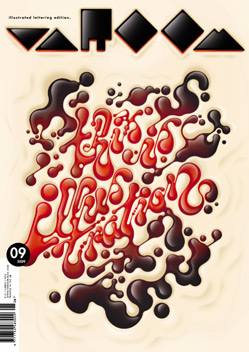 PETER GRUNDY:  THE CRAFTSMAN WHO COULDN’T DRAW  BY JOHN O’REILLY  Information graphics are often dry and uninviting. By adopting an illustrative approach, Peter Grundy – first as one half of design duo Grundy and Northedge, and latterly as Grundini – has revolutionised the way information is presented. No more Power Point pie charts or dreary graphs. In Grundy’s visionary reworking of statistics, the facts come to life as if animated.

MAPPING THE TERRAIN  ILLUSTRATIVE LETTERING  BY STEVEN BATEMAN  To design a typeface for mass use, the rules of typography have to be observed. But as design writer Steven Bateman argues, illustrated letterforms are liberated from this requirement and are free to boast pictorial qualities enlivened by the idiosyncrasies of the artists who made them. Bateman profiles four lettering artists to make his point: Marian Bantjes, Mike Perry, Grandpeople and Alex Trochut.

OVERSPRAY:  RIDING HIGH WITH THE KINGS OF CALIFORNIA AIRBRUSH ART BY NORMAN HATHAWAY  Neglected and stigmatized today, the airbrush once enabled illustrators to ‘rule the world.’ Four men at the centre of the 1970s California airbrush art boom – Charles E. White III, Peter Palombi, Dave Willardson and Peter Lloyd – defined the look of illustrative graphics for a generation. A new book tells the story of these four artists for the first time.

STICKERS IN THE ´CONE´ OF SOUTH AMERICA  BY RODNEY PALMER  Stickers are part of both popular and commercial culture. They are ubiquitous. But are they worthy of serious attention? In South America, where the tradition of street art is as vibrant as anywhere in the world, the illustrated sticker is a vital component of street culture. Art historian Rodney Palmer discovers graphic gems all the way down the South American cone.

SUE COE AND THE ELEPHANTS WE MUST NEVER FORGET  BY WENDY COATES-SMITH  Sue Coe was born in Staffordshire, England. She moved to New York in 1972, and worked as an editorial illustrator. But she soon threw off the constraints of editorial assignments to produce larger paintings and drawings on subjects of her own choosing. Her vivid and provocative work is driven by her deeply held political convictions. Here she discusses her latest exhibition.

THE COMPELLING IMAGE  CHOSEN BY MICHAEL JOHNSON  Illustrators, designers, artists and commentators select an image that has moved them or given them creative stimulus. Designer Michael Johnson chooses an appropriately graphic image from a contemporary Swiss master.

REASONS TO BE CHEERFUL: THE LIFE AND WORK OF BARNEY BUBBLES BY PAUL GORMAN  Book reviewed by Andy Martin

ALL THE ART THAT’S FIT TO PRINT (AND SOME THAT WASN’T): INSIDE THE NEW YORK TIMES OP-ED PAGE BY JERELLE KRAUS  Book reviewed by Jo Davis

Varoom 09 is available from the AOI Shop