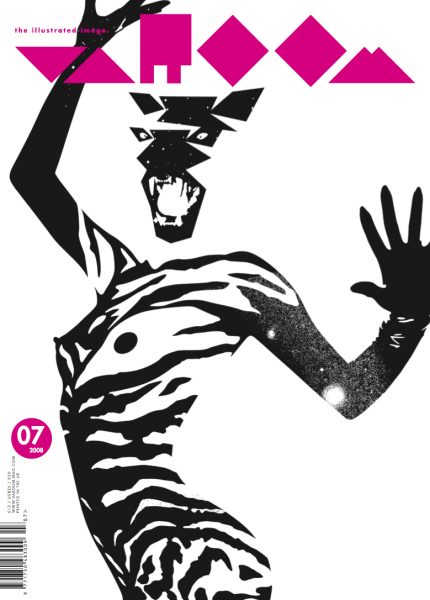 HVASS&HANNIBAL:  PASTEL HAMBURGERS AND DREAMSCAPES  BY CHARLOTTE WEST  Female duo Sofie Hannibal and Nan Na Hvass are already stars in their native Denmark, and are fast gaining an international reputation as creators of enchanted dreamlike domains. It’s a remarkable achievement because for much of their existence they have been full-time students.

MAPPING THE TERRAIN:  YOUNG AMERICANS  BY STEVEN HELLER  Interviews with four young artists reveal how American editorial illustration is developing in the hands of a new generation, as they wrestle with the traditional questions surrounding commercial and personal image making. Featuring: Tamara Shopsin, Oliver Munday, Maxwell Holyoke-Hirsch, and Jeremy Traum.

‘BLOBS OF COLOUR WITH A LINE’  AN INTERVIEW WITH BRIAN GRIMWOOD  BY ADRIAN SHAUGHNESSY  Brian Grimwood’s rise in the 1970s was meteoric. He developed a way of working that made him one of the UK’s most successful illustrators. He describes his style as “loose and free – just blobs of colour with a line.” Today he combines his role as founder of illustration agency CIA with that of a  freelance illustrator.

DUST, BLOOD AND OIL  – THE WORK OF PETER KENNARD  BY JOHN O’REILLY Peter Kennard’s montages were described by John Berger as ‘pure and dirty.’ Today they are bought by the Tate and revered by fashionable street artists. But throughout his life Kennard has been pursuing a path of opposition and the rejection of cosy consensus. For Kennard, the image is a way of answering back.

MAKING THE UNBELIEVABLE, BELIEVABLE:  WHAT IS A SUCCESSFUL FICTIONAL WORLD?  BY HAYLEY POTTER  The verb ‘to illustrate’ comes from the Latin lustrare. It’s also the name of an occasional series where illustrators are invited to meditate on an issue of importance. Here, illustrator and recent RCA graduate Hayley Potter looks at the psychological, creative and professional challenges surrounding creating believable fantasy worlds.

THE COMPELLING IMAGE  CHOSEN BY JESSICA HELFAND  Illustrators, designers, artists and commentators are invited to select a compelling image, and explain why it has moved them or given them creative stimulus. Graphic designer and writer Jessica Helfand makes a . . ..

BEARDS, BRIGHTON AND BEARDSLEY –  FOUR GENERATIONS OF ILLUSTRATORS -  DISCUSSION CHAIRED BY PAUL BURGESS  Four generations of illustrators meet to discuss the craft of illustration in 2008. In a wide-ranging discussion, John Vernon Lord (69), Paul Burgess (46), Jasper Goodall (35) and Jim the Illustrator (27) reveal their surprisingly congruent views on illustration, education and beards.

HOW TO BE AN ILLUSTRATOR  Book reviewed by Lawrence Zeegen

EJ MAJOR: TRY TO DO THINGS WE ALL CAN UNDERSTAND  Exhibition reviewed by Mitch Miller