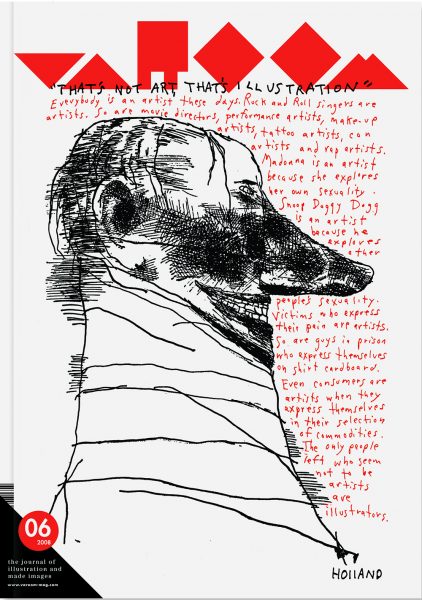 VAROOM 06  the journal of illustration and made images April 2008

PRE-LITERARY LOGIC AN INTERVIEW WITH BRAD HOLLAND  BY JO DAVIES  The icon of American Illustration invites Davies to his New York studio to discuss his early development, his uncompromising attitude, his fight for illustrators’ rights, the pulse of American creativity now, and what he plans for the future. An expanded version of this interview can be seen in Web  Only content.

UNROLLED AND GLUED: CHILEAN STREET ART BY RODNEY PALMER  In the West, street art has commodified status in galleries, but in Chile it retains its ‘outsider’ status, produced on paper and pasted up in public places, a potent weapon critiquing society.

KVETA PACOVSKA: BY WENDY COATES SMITH  ‘Queen of contemporary childrens’ illustration’, the celebrated Czech artist Kveta Pacovska has illustrated more than 60 books, translated into German, English, Japanese, French, Italian and Chinese. Influenced by Paul Klee, Kandinsky and Miro, her books have a folk art charm, and are painted with beautiful colour. She has regularly exhibited throughout Europe, including major shows in Prague (1992), Berlin (1993) and Frankfurt (1994).

THE COMPELLING IMAGE  CHOSEN BY JONATHAN ELLERY  Leading illustrators, designers, writers and commentators are invited to select an image of particular interest to them. Jonathan Ellery chooses a pair of ‘dirty white gloves’.

PEDDLING FAST FOOD AS FINE DINING:  A VISUAL ESSAY BY DUST  Dust specialise in ‘design and the surrounding disciplines.’ Their visual essay investigates the notions of ‘less is less is less’ and ‘making a silk ear out of a sow’s purse.’ As they say ‘It’s about what gets lost when things get made better.’ They also pose the question: ‘If culture is finite and enrichment is the goal, who chooses what stays’?’.

THE ART OF SELF-PROMOTION  BY ROD HUNT  Success is rarely an accident. The image-makers we admire have worked hard to establish themselves, but there is no magic formula: even when artists become well-known they have to keep working to promote themselves. Andy Smith, Catalina Estrada, Gary Taxali, Jay Taylor, Jeremyville, Jon Burgerman, Jonny Hannah and Stuart Kolakovic are consulted.