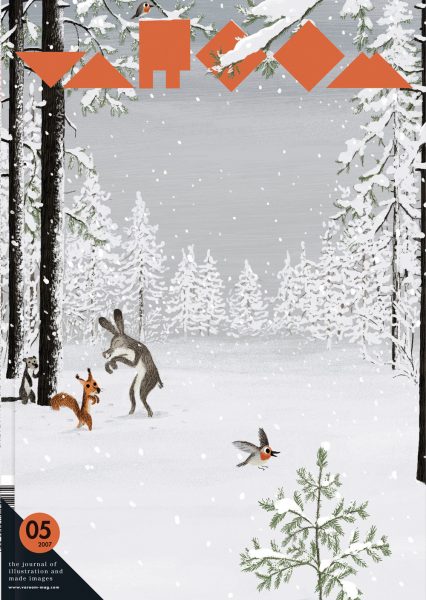 VAROOM 05  the journal of illustration and made images November 2007

THE IMPORTANCE OF MISTAKES : AN INTERVIEW WITH TERRY DOWLING  BY ADRIAN SHAUGHNESSY  In a revealing and far-ranging interview, Terry Dowling, one of the founding fathers of radical contemporary illustration and a precursor of punk visual style, describes his early failed attempts to get commercial work, and his subsequent rejection of commercial practice in favour of teaching and a life of personal enquiry.

PAUL FARRINGTON:  THE BEAUTY OF THE UNPREDICTABLE  BY ANNA GERBER  Designer, musician and digital pioneer Paul Farrington moves away from his customary screen based work to undertake a giant installation covering a 196m-long walkway at Imperial College, London. Farrington has left the realm of invisible ones and zeroes and entered the world of scientific discovery, Britney Spears posters and rugby fixtures.

MARIO HUGO – A MODERN ROMANTIC BY MARK WEBSTER  New York artist Mario Hugo describes himself as having had ‘a tempestuous affair with illustration.’ But his work is far from tempestuous. It reveals a thoughtful artist, eschewing the hard digital lines of much contemporary expression, in favour of a softer and more humanistic approach

HEATED DEBATE:  THE BORROWERS  BY ROBERT MASON  Heated Debate is a platform for thought-provoking views and a start point for debate. Writers, commentators and practitioners are invited to take a critical and discursive look at imagery and the role of the image-maker in visual culture. Illustrator, writer and tutor Robert Mason looks at the contentious subject of plagiarism and its corrosive effect on the craft of illustration.”

THE COMPELLING IMAGE  CHOSEN BY GEORGE HARDIE  Leading illustrators, designers, artists and commentators are invited to select a compelling image, and explain why it has moved them or given them creative stimulus. The illustrator George Hardie makes a typically robust selection.

A BEGINNERS GUIDE TO PROPAGANDA : A VISUAL ESSAY BY BY NICK McFARLANE  Freelance graphic designer and illustrator Nick McFarlane offers a sharp brained commentary on the modern obsession with spin, hype and propaganda. It’s a manual for wannabe spin doctors.

AN UNWRITTEN DIARY  BY RICHARD BEARDS:  AN ENGLISH ILLUSTRATOR’S PERSPECTIVE, NEW YORK:  Despite having a New York agent for 15 years, British illustrator Richard Beards had failed to conquer the great metropolis. In 2006 he decided to move there. For six months Beards observed the NYC scene with a mixture of cool detachment and cinematic-like wonder. While in self-imposed exile he kept a diary and chronicled his time in the ‘greatest city on earth.’

Varoom 5 is available from the AOI Shop