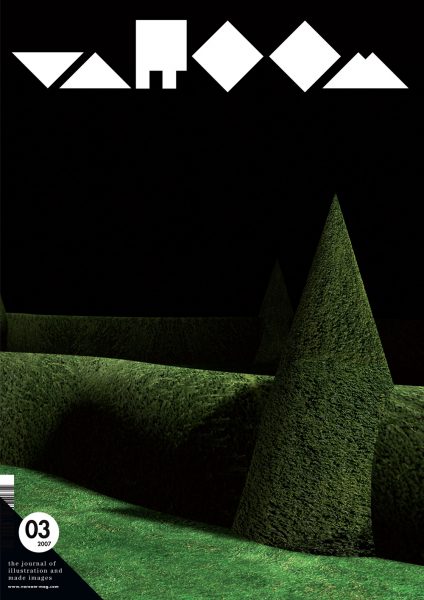 VAROOM 03  the journal of illustration and made images April 2007

WOLVES, LOGIC AND HAPPY MISTAKES:  AN INTERVIEW WITH SARA FANELLI  BY STEVEN HELLER  Celebrated book illustrator Sara Fanelli draws from a rich gene pool of mythology, literature, art and playfulness. Her philosophically inclined imagination has created a body of work that challenges and delights in equal measure.

SOULFUL SIMPLICITY:  THE WORK OF DAVID FOLDVARI  BY ANNA GERBER  David Foldvari was born in Hungary, but spent his adolescence in suburban England. His striking and confident black and white drawings, full of poise and inner stillness, only partly conceal an inner restlessness.

HEATED DEBATE:  THE IMAGE THAT EXPLODED  BY LEWIS BLACKWELL  In a new platform for debate, Lewis Blackwell, former editor of Creative Review argues that whilst every medium has become aggressively more visual, the making, distributing and usage of images has moved from being an expensive custom-business, to an increasingly commoditized one. Blackwell argues that for illustration, there is the potential to see a new golden age, but only if the opportunity seized.

THE COMPELLING IMAGE  CHOSEN BY DAVID HUGHES  Illustrator David Hughes makes a surprising choice and gives compelling and deeply personal reasons for his choice. For those who know his images, Hughes’ unstoppable flow will strike familiar creative chords.

YOU CAN STILL DO A LOT WITH QUITE A SMALL BRAIN : A VISUAL ESSAY BY ROBERT RYAN  The grand wizard of the paper-cut reveals the internal bracing of his imagination in an autobiographical meditation on childhood, work, war and forbidden body parts. Ryan walks in the quiet footsteps of Bawden, Ravilious and the other deities of English narrative illustration. Not bad for someone born in Cyprus to Irish parents.

STEWART MACKINNON:  LOST ILLUSTRATOR  BY RICK POYNOR  Stewart Mackinnon was a powerful force in early 70s image-making. In constant demand by the hip publications of the time – Oz, Nova, Time Out – a glittering career lay ahead of him. But when a lucrative offer from Playboy ran against the grain of his radical political sensibilities, he abandoned illustration in favour of filmmaking. Mackinnon’s work has rarely been seen since its first appearance.