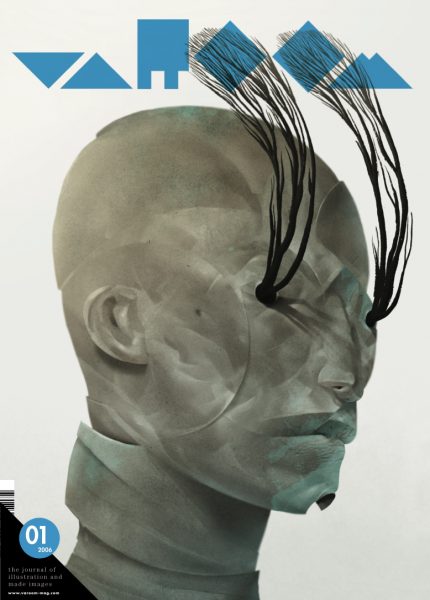 IILLUSTROLOGY:  THE VISUAL THEORY OF THE FUTURE BY JOHN O’REILLY  Writer John O’Reilly puts forward the seductive theory of illustrology, and identifies an ‘in-between’ zone where illustrators are free to document the zeitgeist  .

MAPPING THE TERRAIN INTERVIEWS WITH ZOREN GOLD & MINORI, SERGEI SVIATCHENKO, GENEVIEVE GAUCKLER, STELLA VINE  An up-close look at the work of five individuals who are mapping the contemporary terrain and redefining the ancient art of illustration and image making.

THINKING THROUGH MAKING  INTERVIEW WITH DAN FERN BY BY ADRIAN SHAUGHNESSY  Numerous designers and illustrators have benefited from Dan Fern’s role as Head of the Communication Art & Design course at the Royal College of Art.

THE COMPELLING IMAGE CHOSEN BY JULIAN HOUSE  Each issue a leading illustrator, designer or commentator describes a compelling image that has moved them or given them creative stimulus. In this issue, designer Julian House makes an odd selection.

BLOW THE LINE  A VISUAL ESSAY BY PAUL DAVIS

ILLUSTRATED GUARDIAN  BY EMILY KING  The Guardian uses illustration with a confidence and purposefulness unmatched by any other British newspaper. While its news pages mainly use photography, its comment and analysis pages make extensive use of illustration.

ED FELLA: THE KING OF ZING, FOREVER  BY ALICE TWEMLOW  Ed Fella started out as a ‘layout guy’ in the commercial studios of 1960s Detroit. Today, at 68, his work is a boundary-defying, idiosyncratic hybrid if illustration and design.

EVERYTHING WILL BE OK  Compendium #4: A Reader’s Guide to the Online Periodical  Reviewed by Adrian Shaughnessy

YOKOLAND – AS WE GO UP WE GO DOWN  Die Gestalten Verlag 2006, edited by R. Klanten  Reviewed by Adrian Shaughnessy