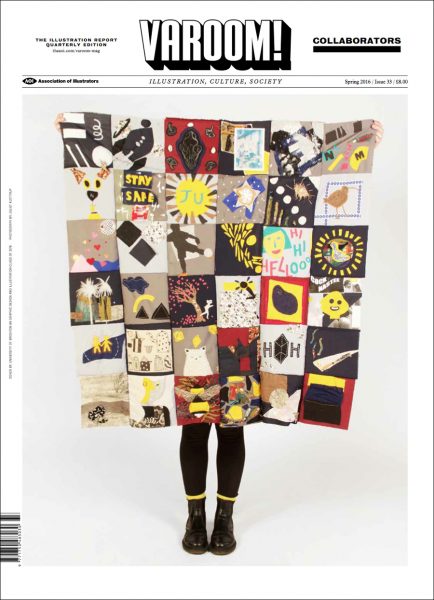 The unexpected encounter, the discontinuity of everyday life, the stuff that interrupts our normal behaviours. We often understand collaboration as the sum of two talents, but it’s really a network of people, spaces, materials and knowledge. Collaboration is about discovering the life-affirming creativity in the gaps.

Bringing together individuals, networks and global brands across multimedia projects, the Collaborators issue of Varoom discovers the nuts and bolts of a successful children’s book collaboration between writer and illustrator; design studio ManvsMachine’s recent ambitious collaboration with Nike; the Fabulous Year 24 Group and how they brought the female sensibility to shōjo manga, and highlights the key networks through which illustrators generate creative and emotional support.

Anna and Elena Balbusso, Marco Lawrence, Chie Chihiro and Giulia Garbin create collaborative work across illustration, print-making, limited run books and ceramics. They share their experiences and thoughts on the nature of collaboration with Derek Brazell.

Zoë Taylor tells the extraordinary story of the Year 24 Group, a group of pioneering young Japanese women who reshaped the comics industry and the wider culture, challenged inherited ideas of gender and revolutionised visual storytelling. Taylor also interviews Matt Thorn, whose English translations became a vehicle for popularising the work.

Pas de Deux – The Dance of Illustrator and Writer

The recently released Tamsin and the Deep by Neill Cameron and Kate Brown is part of a highly successful ongoing collaboration for The Phoenix comic that began with ballet story Emilie’s Turn. Sarah McIntyre looks behind the creative curtain to discover the nuts and bolts of a successful children’s book collaboration between writer and illustrator.

Collaboration is increasingly becoming part of how illustrators live and work. Roderick Mills highlights the key established and emerging networks through which illustrators generate creative and emotional support, and the way in which they are reworking and reimagining the practice.

Reportage: After the Earthquake

The aftermath of the 2015 Nepal earthquake a saw grassroots group of artists, journalists, photographers and researchers embark on a cross-media, multinational storytelling project. We spoke to project co-founder illustrator Harry Morgan about Reflections, a collaboration that formed to truly embrace the idea of ‘working together’.

Design studio ManvsMachine’s most recent collaboration with Nike is the most ambitious project they have worked together on to date. Shane Walter tells us about the stimulating motion visuals they had produced toshowcase the three shoe designers celebrated in Nike’s global Air Max Day ’16 campaign.

Also in this Issue:

Tristan Manco interviews multi-disciplinary street art collective 44flavours about theirs’ and Jim Avignon’s collaborative exhibition based on the game Halma. They discuss the challenge of introducing game rules to the collaborative process.

Martin Colyer introduces Brian Stelfreeze as he tells us about working with Ta-Nehisi Coates on Marvel’s new Black Panther.

Regular contributors Paul Davis and Marian Bantjes decide on a collaborative process for their Varoom 33 feature, resulting in a prescient exchange with a startling and deeply personal outcome.

Varoom 33 is available from good book stores and the AOI Shop. 64 pages of great images and insightful comment. Get Collaborating.