Events / V for Vendetta: Behind the Mask Exhibition & In Conversation with David Lloyd Virtual Event 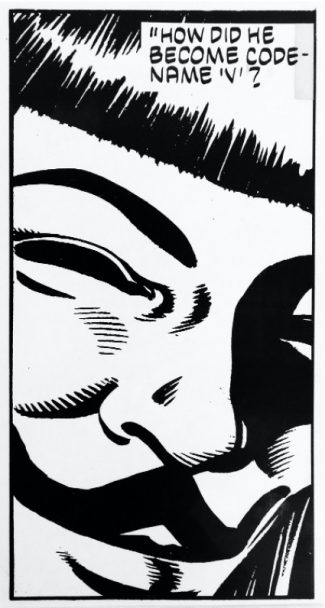 V for Vendetta: Behind the Mask Exhibition & In Conversation with David Lloyd Virtual Event

The Cartoon Museum re-opens with an exhibition examining the cultural impact of V for Vendetta, from seminal graphic novel to hit film and a virtual event with David Lloyd:

On Tuesday 18 May, The Cartoon Museum in London’s Fitzrovia will re-open its doors and invite the public to explore the cultural impact of one of the most ground-breaking series of comics ever to be published – V for Vendetta. Behind the Mask will chart the rise from graphic novel, to hit film and now global phenomenon as a symbol of protests.

Join David Lloyd – Illustrator of V for Vendetta and founder of the award-winning web comic Aces Weekly –  in conversation with Steve Marchant, discussing the legacy of V and the changing nature of comics over the last 30 years. Booking essential. Tickets can be booked here or by visiting the cartoonmuseum.org. website

Securing rare loans from the art department of Warner Bros., The Cartoon Museum will present a history of this modern classic with original artwork and covers, as well as costumes and designs that have never been seen in the UK before.

Illustrated by David Lloyd and written by Alan Moore, the central character of the masked and mysterious ‘V’ became an iconic symbol of comics, cinema and the hacker group, Anonymous. Its cultural impact, spanning nearly 40 years, is explored through 36 original artworks by David Lloyd, including black and white pages and colour paintings. These will be displayed alongside the original mask worn by Hugo Weaving in Warner Bros.’ blockbuster 2005 movie adaption, one of only three that were used during production, as well as costume designs and storyboards.

V for Vendetta first ran as a black-and-white strip between 1982 and 1985, in Warrior, a British anthology comic published by Quality Communications. Three years later, DC Comics – famously the publishers of Batman and Superman titles – persuaded Moore and Lloyd to let them give V a new home.

From then, Lloyd’s illustrations and Moore’s storylines – portraying a moody and bleak futuristic vision of Britain, suffering from an almost apocalyptic nuclear destruction and the ravages of a neo-fascist state – became one of the most celebrated graphic novels of all time. It is in this setting where V wages.

The exhibition launches at a time when, perhaps inspired by the fears and anxieties of the time in the UK, audiences may see V for Vendetta in a new light, following a pandemic year that recharged debates over rights, Government control and citizenship.

Joe Sullivan, Director of The Cartoon Museum says: “We’re delighted to re-open following the lockdown and to do so by inviting people to look behind the mask and explore how a British comic strip became a global phenomenon’.