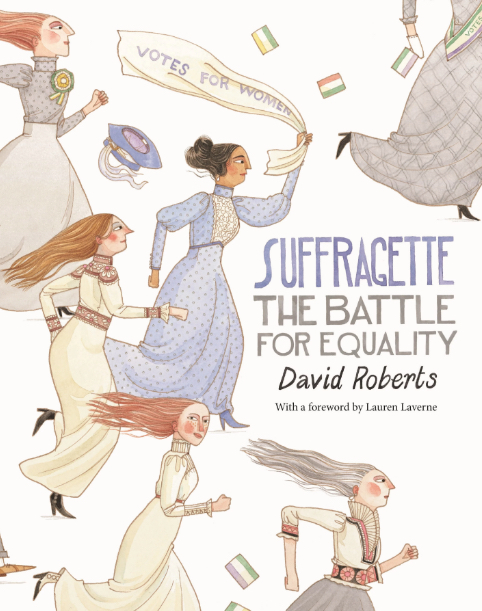 Suffragette: Illustrating the Battle for Equality

Join New York Times bestselling author and illustrator David Roberts to celebrate the publication of his latest book Suffragette: The Battle for Equality, an exquisitely illustrated history of the women’s suffrage movement. Covering the whole range of female and male suffragist experiences – from aristocrats to the middle and working class as well as a look at the global struggle for universal suffrage, Suffragette brings to life the many vivid characters and stories of the movement.

David will be in conversation with Two Hoots Publisher Suzanne Carnell, as they discuss some of these compelling stories of daring deeds and unshakeable persistence, tales of comradeship and courage – and the school project that started it all.

David Roberts has earned great acclaim for his distinctive illustrations. David’s work includes collaborations with his sister Lynn on retellings of several classic fairy stories – their book Little Red was shortlisted for the 2005 CILIP Kate Greenaway Medal. David’s first collaboration with Julia Donaldson – Tyrannosaurus Drip – was published in 2007 by Macmillan, and since then they have worked together on several other picture books. David is also the illustrator of the New York Times bestselling Rosie Revere, Engineer and Ada Twist, Scientist written by Andrea Beaty. He is the illustrator of Julian Clary’s fiction series The Bolds, including The Bolds’ Great Adventure, a World Book Day Book 2018. David Roberts has been fascinated by the suffragists since his school days, and his illustrated history of the fight for women’s suffrage is a real passion project.

After working for over twenty years in publishing, including a decade heading up the picture book list at Macmillan Children’s Books, in 2016 Suzanne Carnell launched her own illustrated imprint, Two Hoots, with the ambition to publish illustrated books with no boundaries on format, genre or even age group. The list has quickly established itself as a hallmark of quality, and its books have won several awards including the prestigious CILIP Kate Greenaway Medal.

Copies of Suffragette: The Battle for Equality will be on sale at the event. www.panmacmillan.com/authors/david-roberts/suffragette