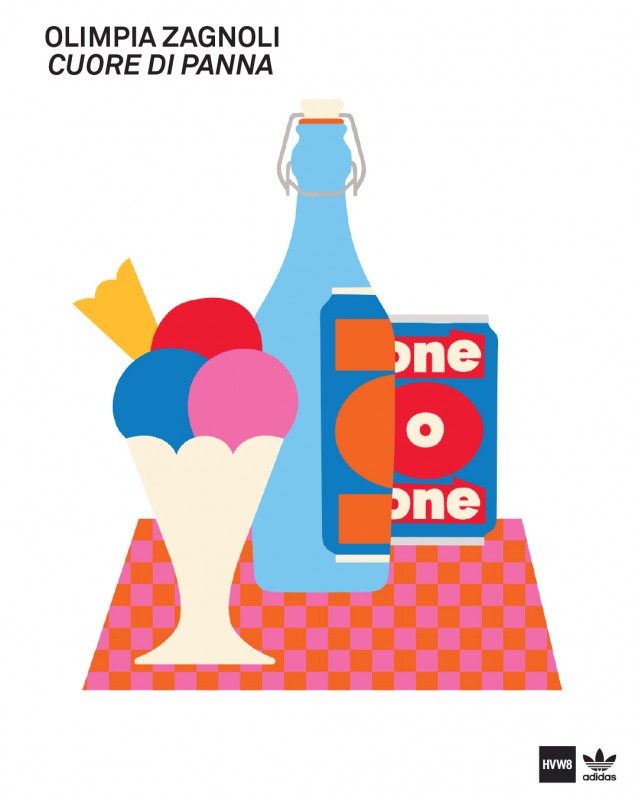 About the Exhibit: Cuore Di Panna

Through a series of evocative still lifes, light installations and videos, the Olimpia recalls her childhood memories lived in the era between the end of the 80s and the beginning of the 90s in a sunny Italian season, dazed from images from TV advertisements of ice cream and sodas. Italy was still unaware of the approaching dark years of Berlusconism, in which American magnetism, shaking booties and the cult of money would sabotage the cultural landscape that had characterized the country during the 70s. The artist remembers afternoons spent sitting on plastic chairs outside ice cream parlors, with Heather Parisi playing on the radio and her mother smoking cigarettes while reading Hemingway, blue popsicles and glow-in-dark bracelets. In the years when Barbie Totally Hair was replacing Sophia Loren, summers seemed endless and dashing bicycle races with a Walkman on one’s ears were the best cures for loneliness.

Olimpia Zagnoli was born in Reggio Emilia on the leap day in 1984. As a child she moved to Milan, where she currently lives and works. Olimpia studied illustration at the Istituto Europeo di Design (IED) in Milan and graduated in 2007. The following year, after a period of living in New York, she began publishing her illustrations in Italian and international newspapers. Olimpia draws on Futurism, as much as on The Beatles. Her unique style comprises essential images, curvy shapes and saturated colors, inspired equally by art history and pop culture.