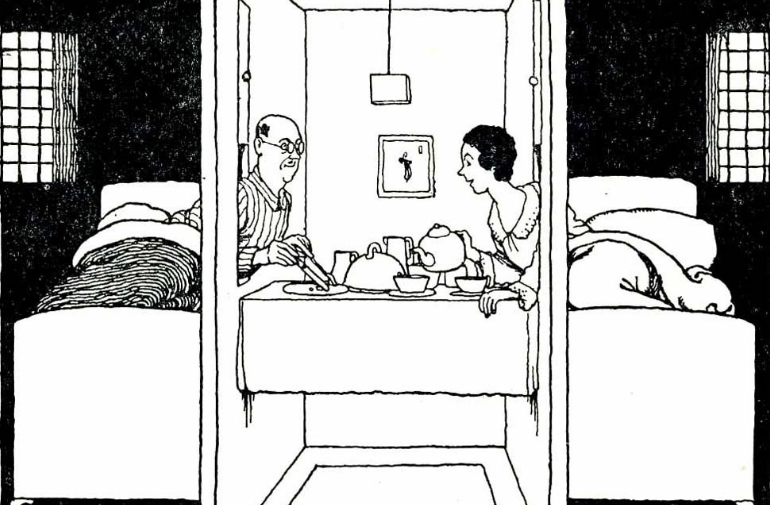 From about 1930 onwards Heath Robinson’s humour was centred on domestic life. In 1934 his house “The Gadgets” was constructed at the Ideal Home Exhibition, and in 1936 How to Live in a Flat, the first of his series of “How to…” books was published.

This exhibition will show an early series of “Ideal Home” cartoons published in 1933 and rare photographs of the construction of Heath Robinson’s house at the Ideal Home Exhibition. It was peopled with more than thirty life-like moving figures, all busy about their daily tasks, assisted by numerous contraptions. It was this construction that later provided the inspiration for the opening scenes of the Wallace and Gromit film ‘The Wrong Trousers’.

There will be original artwork from How to Live in a Flat which gently satirised modernist architecture and Art Deco design as well as his usual target of people who take themselves too seriously. Subsequent books in that series address gardening, motoring and marriage. During the Second World War he presented his hilarious ideas of How to Run a Communal Home and How to Build a New World assisted by a host of new gadgets. Examples of the set of nursery china that Heath Robinson designed in 1927 for a Knightsbridge department store will be on show.