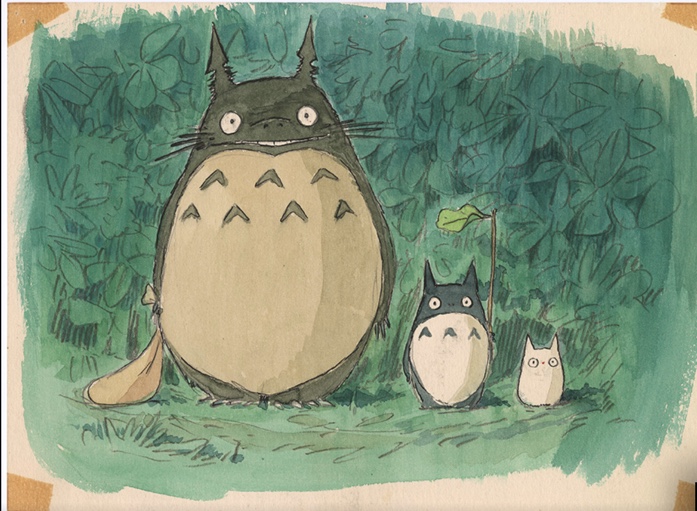 The exhibition portrays the creative mind of an auteur and philosopher who for more than 50 years has expressed his ideas across a broad and imaginative filmography. From the heart-warming My Neighbor Totoro (1988) to the mystical, Academy Award®-winning Spirited Away (2001) and beyond, the retrospective incorporates all of Miyazaki’s animated feature films into a series of immersive environments that offer a journey both educational and experiential.

Hayao Miyazaki is thematically organized into seven sections. Visitors enter through the Tree Tunnel gallery, created to evoke the young character Mei’s path to discovery in Totoro; Creating Characters introduces Miyazaki’s many protagonists; Making Of illustrates the filmmaker’s early career and the founding of Studio Ghibli, as well as the process of producing an animated feature film such as Nausicaä of the Valley of the Wind (1984).

The Creating Worlds section includes the immersive Sky View installation and captures the contrast between beautiful, natural environments and industrial settings often featured in Miyazaki’s movies; Transformations explores the metamorphoses his characters and settings often experience; the Magical Forest gallery, with its Mother Tree installation, highlights the interconnectedness of humans, nature, and the spiritual worlds; and a Spirited Away-inspired portal moves visitors gently from Miyazaki’s world back to the real one.

Accompanying Hayao Miyazaki is a 256-page, richly illustrated catalogue published by the Academy Museum and DelMonico Books. It includes a foreword by Toshio Suzuki, essays by Pete Docter, Daniel Kothenschulte, and Jessica Niebel, and the artist’s filmography.

For the length of its run, the exhibition will be supported with film screenings in both English and Japanese in the museum’s state-of-the-art theaters, public programs, and unique Studio Ghibli merchandise for sale at the museum store.

Hayao Miyazaki is presented by the Academy Museum of Motion Pictures in collaboration with Studio Ghibli. It is organized by Academy Museum of Motion Pictures Exhibition Curator Jessica Niebel and Assistant Curator J. Raúl Guzmán. Technology solutions generously provided by Christie, and major support comes from the Arthur and Gwen Hiller Memorial Fund. This exhibition also is supported, in part, by the Los Angeles County Board of Supervisors through the Los Angeles County Department of Arts and Culture. In-kind airfare provided by All Nippon Airways. Special thanks to the Japan Foundation for their partnership.