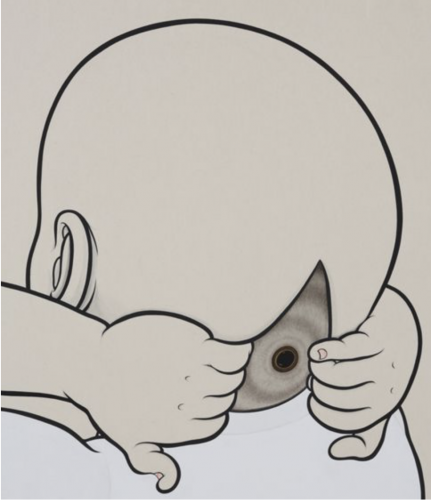 The exhibition explores Hans Bellmer’s (1902-1975) lasting influence on artists and thinkers through work by twenty modern and contemporary artists from Japan, UK, Lebanon, Nigeria, Germany, France and US.

‘If the origin of my work is scandalous it is because, for me, the world is a scandal’ Hans Bellmer.

Including carefully selected drawings made by Bellmer in the 1940s to 60s, by his partner Unica Zürn in the 1960s, by Richard Hamilton in the 1950s and by the Lebanese artist Huguette Caland in the 1970s. These modern works are combined with contemporary approaches that relate to feminism, gender fluidity and anti-racism, including new commissions by Mathew Hale, Rebecca Jagoe, Aura Satz and Marianna Simnett. Bellmer’s influence in Japan is represented by the work of Fuyuko Matsui, Kumi Machida and Tabaimo and the exhibition also includes Paul Chan, Neil Gall, Sharon Kivland, Jade Montserrat, Jean-Luc Moulène, John Murphy, Paul Noble, Wura-Natasha Ogunji and Chloe Piene

FIGURE/S: drawing after Bellmer explores the body as a site of oppression, liberation and troubling pleasures through the work of modern and contemporary artists. It takes as its starting point Bellmer’s radical and transgressive drawings, whose work simultaneously mimicked and resisted the dehumanisation performed by fascism and racism. His drawings have had a powerful influence, sometimes subterranean, on many artists across the world in both high and popular culture, from French Surrealism to Japanese manga.

This exhibition is curated by Michael Newman (Professor of Art Writing, Goldsmiths, University of London) and Kate Macfarlane (Co-director, Drawing Room). An art historian and critic, Newman has written extensively on contemporary art, and has a long-standing interest in drawing, with numerous publications, including ‘The Traces and Marks of Drawing’ in The Stage of Drawing: Gesture and Act (Tate Publishing and The Drawing Center, 2003). He has been researching Bellmer for six years and teaching his work in relation to contemporary art.