A Counting Story From 0 to 7.5 Billion 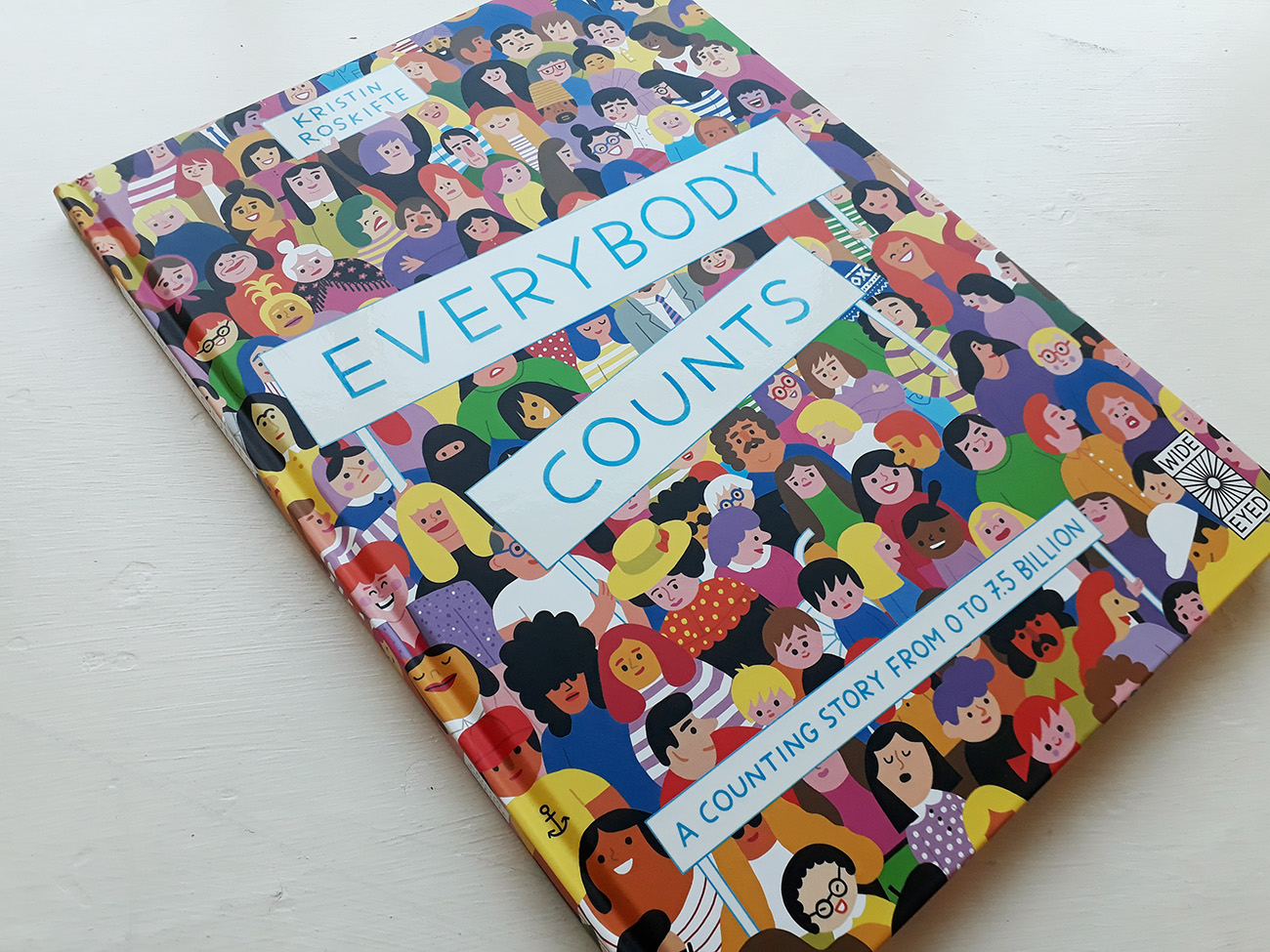 This book is built around contemplation, the times where we take a step back from the world and become a spectator, observing the appearance and actions of others and use this to build a mental narrative of that person’s life. This can take place anywhere, such as when we are shopping, in a traffic jam, or in an airport departure lounge. Norwegian illustrator and author Roskifte utilises these scenes of daily twenty-first century life as a way to enable us to empathise with both the observed and the onlooker. 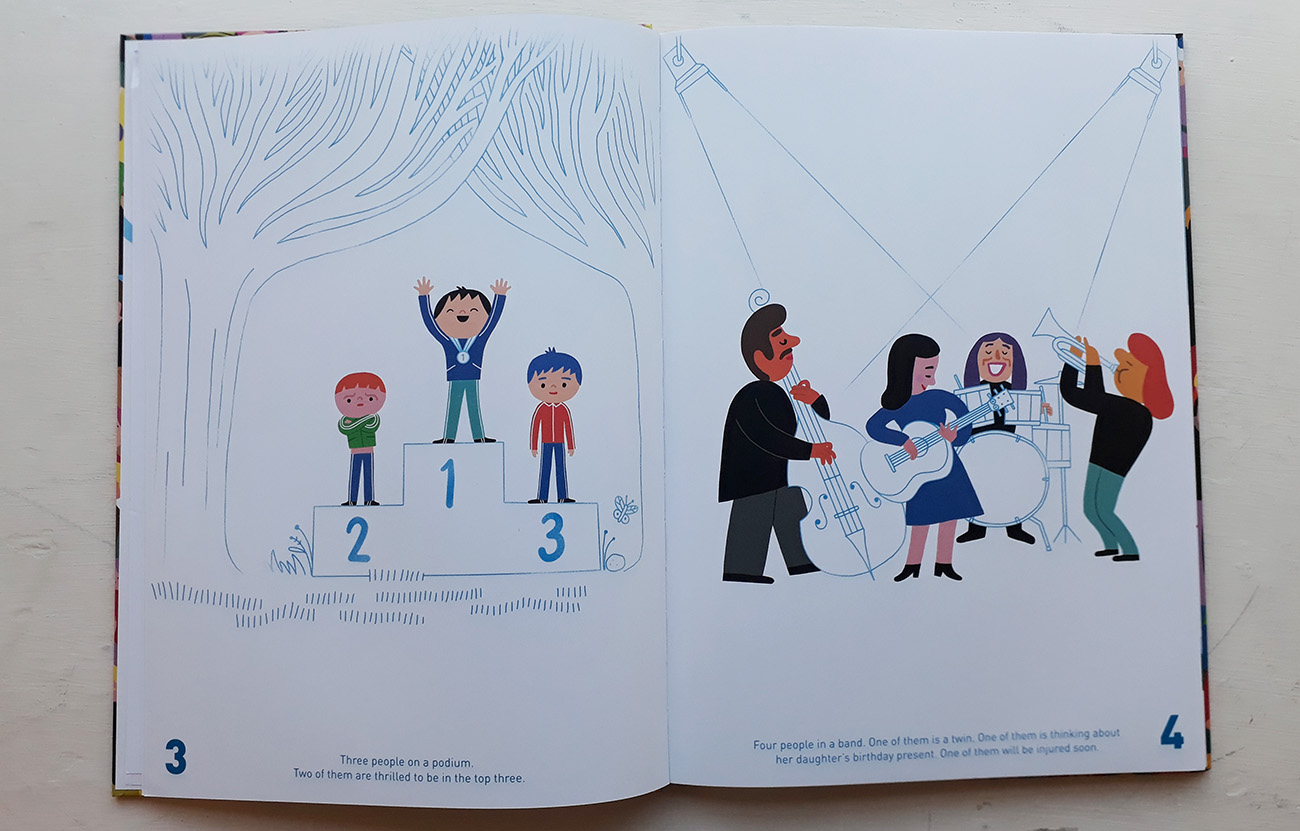 With each turn of the page, the reader is presented with an ever-increasing number of characters engaged in some sort of activity or interaction. The narrative begins with a woodland scene, drawn in crisp blue line on a white background, supported by the text ‘No one’. On the next page, we see a solitary child (coloured with graphic shapes) in their cosy bedroom, looking at the stars whilst ‘counting his heartbeats’. It is a tranquil scene, the text juxtaposing the charming chaos of toys and books on the bedroom floor.

This little boy makes several appearances throughout the book, alongside his family. We learn in the ‘Secrets and Answers’ section at the back of the book that his name is Thomas. The presence of this family and other characters who appear regularly gives a structure to the book and allows Roskifte to add more and more narratives. 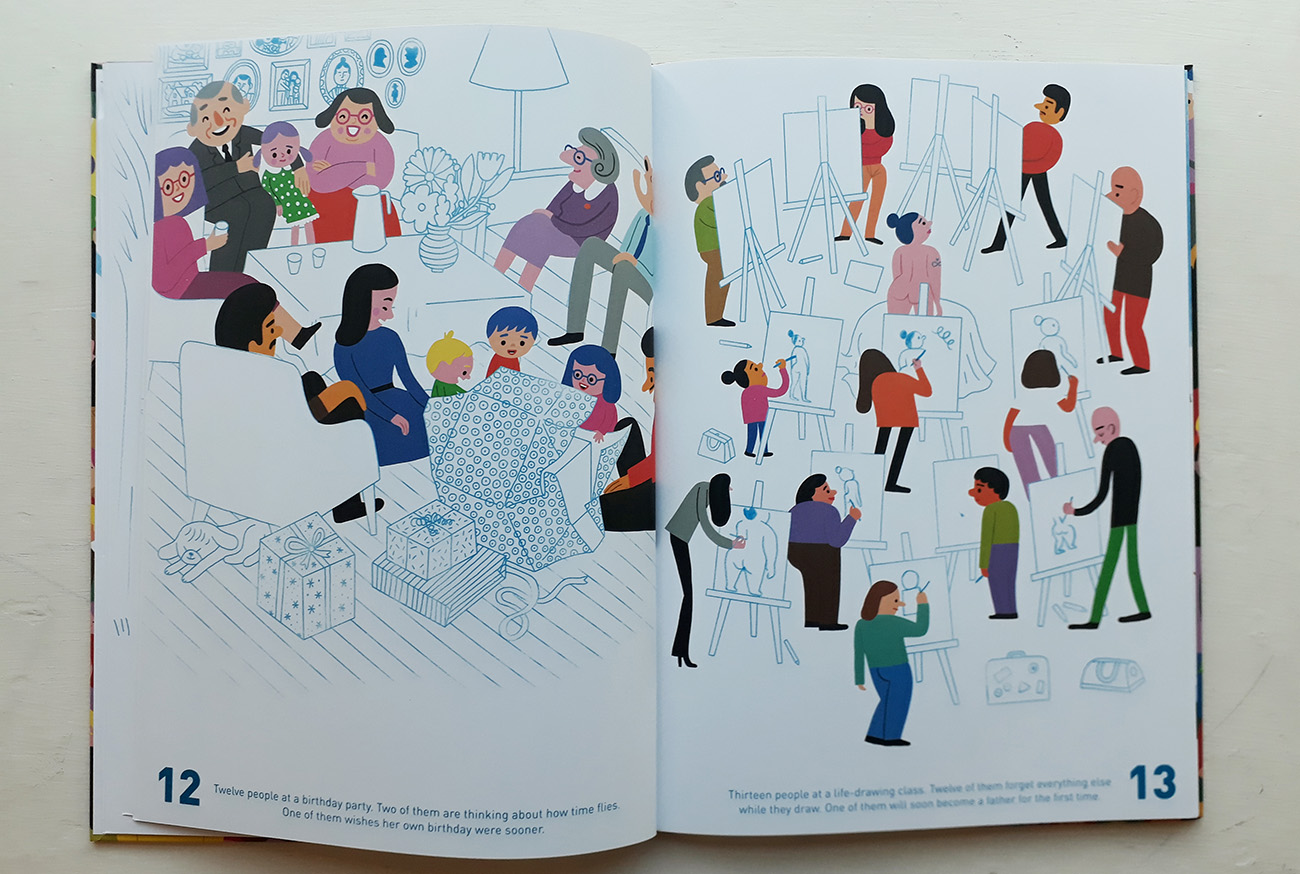 There are moments where Roskifte shifts between emotional extremes, such as a family birthday party on one page, to the same family grieving at a funeral several pages later. Here, the reader is encouraged to recall previous observations and assumptions made in the story and to ask poignant questions like, who is missing?

This book is not meant to be read in a conventional manner. The reader will turn back and forth through pages as they remember a seemingly arbitrary character from a previous spread who has now become the focus of this particular page. The book transforms into a hide and seek game, looking for people as they come and go. These interconnecting narrative lines are expertly weaved into an intentionally jumbled and occasionally bewildering story of human life. 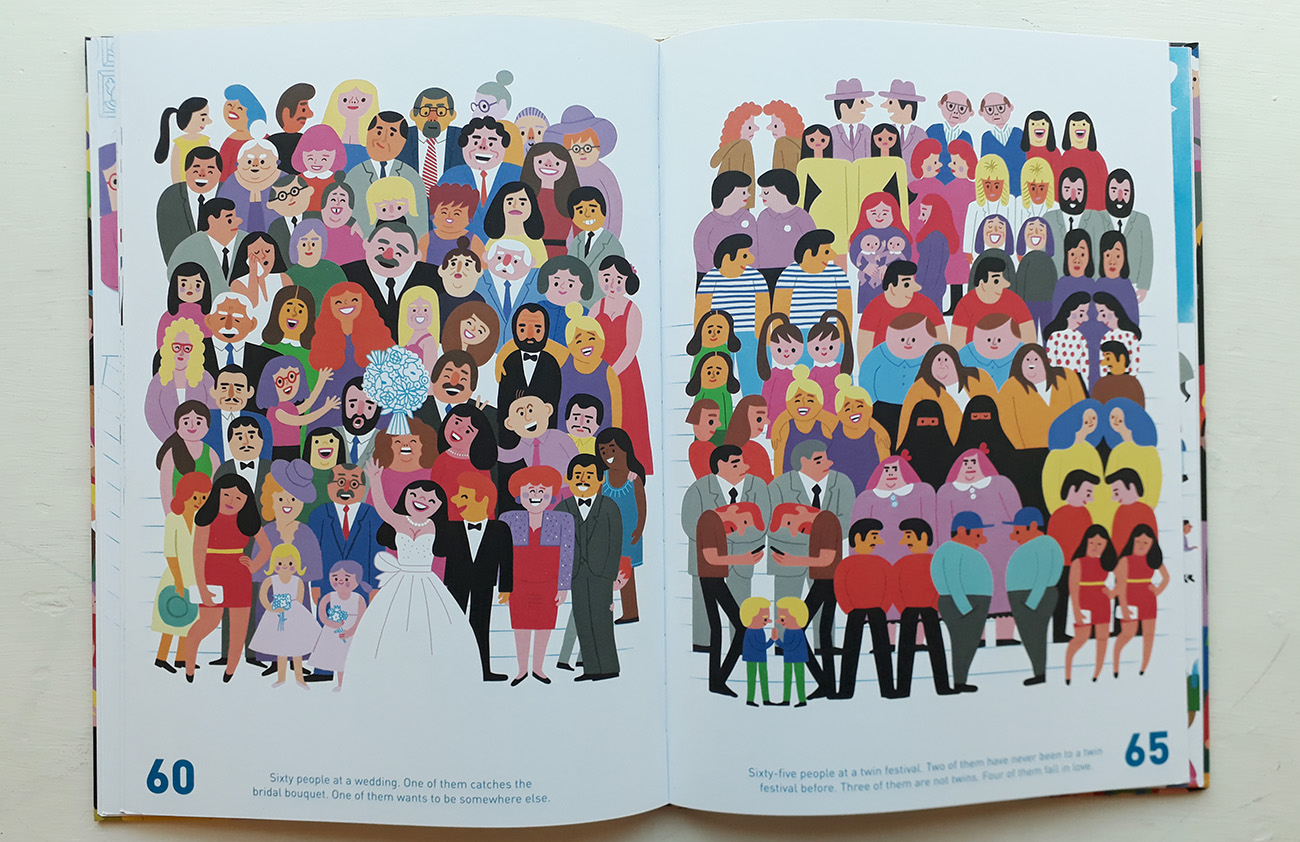 Characters are depicted with distinctive, colourful outfits and hairstyles. Recognisable hats and accessories are welcome clues when trying to locate a particular character’s backstory. This book deals with many complex issues, some of which may be rather challenging and obscure for a younger child, but Roskifte has produced a book that offers the reader (child or adult) an opportunity to contemplate their world. Philosophy, careers, love, death, art, crime, sport, travel, fear, what it means to be a family, community or an individual, are just some of the topics and questions that are introduced here. 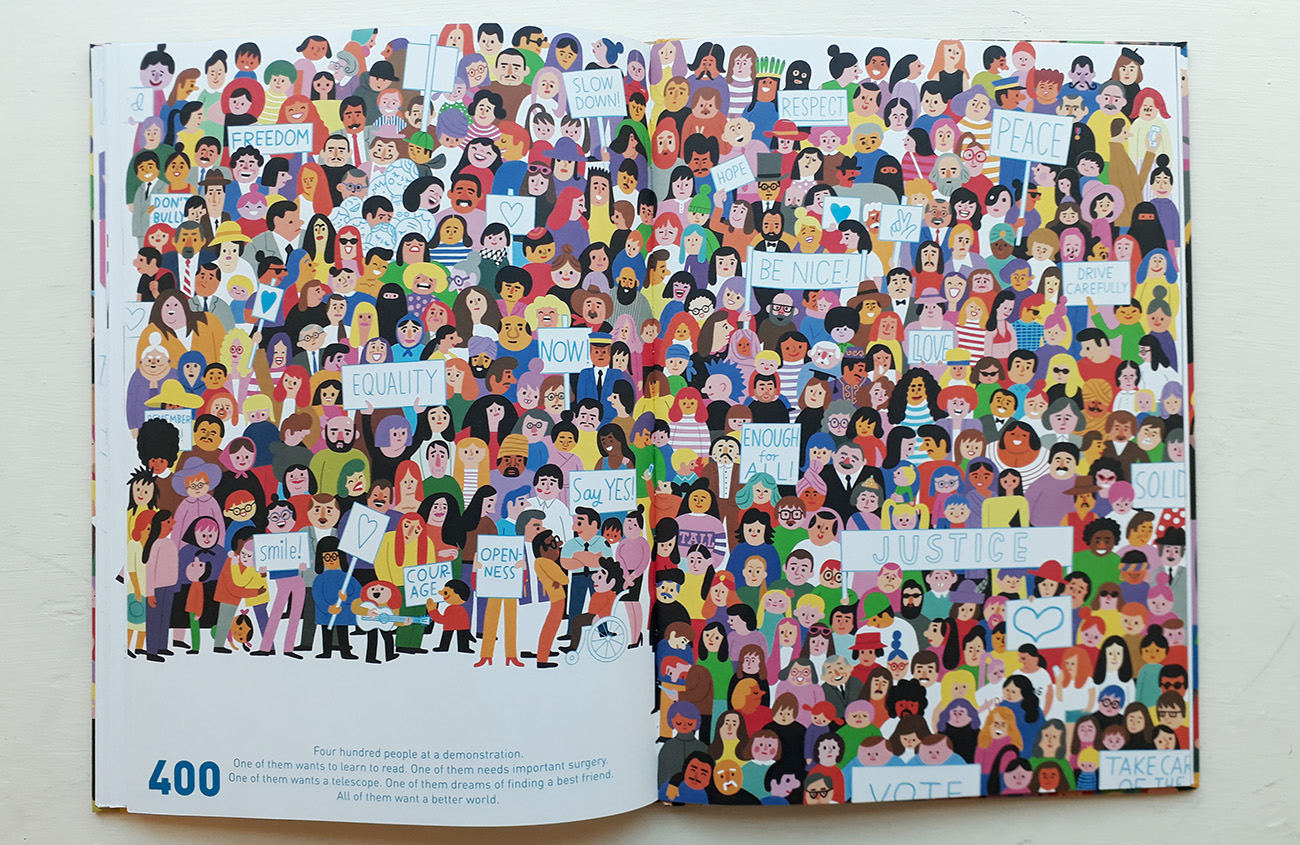 The scenes become busier as the numbers of characters increase, but Roskifte’s clever use of blue line to describe any ‘non-human’ object and environment, allows the focus to remain on the characters and this aids the reading process. The crowds swell as they come together and marvel at a cosmic event. At this point we are asked to reflect on what it means to be human and how our stories are all connected. A small section of questions about specific characters follows, along with more profound questions such as ‘What counts most in your life?’. These will help prompt meaningful thoughts and conversations between readers of this book, leaving them in a reflective and hopefully positive mood.