Astrid Jaekel won the WIA2019 Site Specific Professional Category – here she gives us an indepth look at her amazing project, and some insights into what it’s like to win an award…

Can you tell us a bit about yourself and your practice as an illustrator?
I spent most of my life in Southern Ireland and Germany before moving to Edinburgh, where I have developed my artistic career over the past 10 years. My life in Scotland, the people here, and the culture and landscape have inspired much of the work I do. My work is best known for its bold and playful mixed media artwork and large-scale cut-out silhouettes, featured as temporary or permanent site-specific installations, often involving stories from local communities. But I also like to work in a more conventional format, exploring printmaking techniques and book illustration, for example. Besides my freelance work, I also teach illustration at Edinburgh College of Art, and find the mix of both teaching and my own practice very fruitful and inspiring. 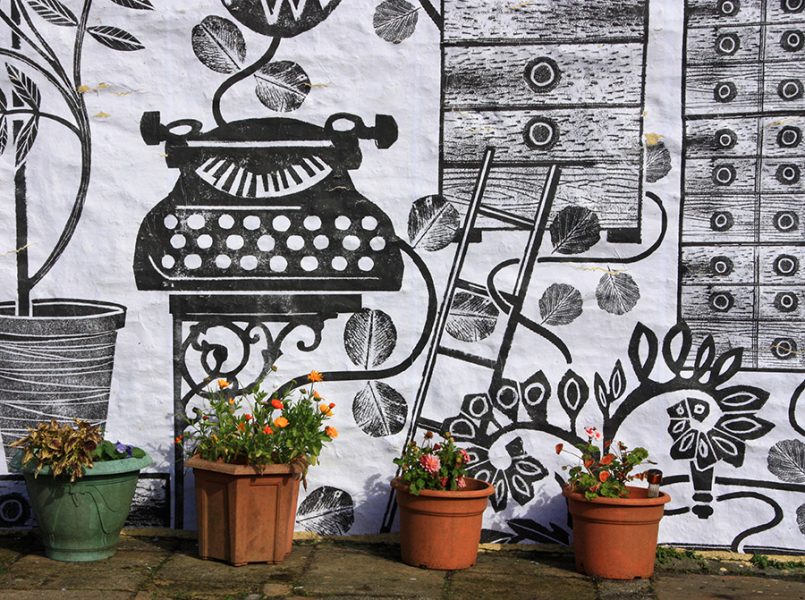 Can you explain a bit about the work you entered to the World Illustration Awards, and why you chose to enter this project?
Five years after my artist residency at the Wigtown Book Festival, I proposed to decorate the town square for the festival’s twentieth birthday using large-scale street art. As part of the project I went from door to door and learned the stories of 11 buildings, and how each building tells the history of the town and all the people. I then turned the buildings’ narratives into repeating patterns, and wallpapered the exterior of the 11 buildings (a total surface area of around 700 square meters), using a scissor lift to get up to a height of eight meters.

The idea was to shine a spotlight on Wigtown and its residents. This was the twentieth anniversary of Wigtown’s book festival. Many of the townspeople have played a huge part in the festival, as volunteers, year after year. So I wanted it to be about them and the town as a whole. Visitors always find the town charming, but they never get to really know the town, so I thought my project might encourage the visitors to mingle with the locals, and to get the visitors to see the place as more than just a charming festival town. There’s history there and people who make it possible year after year. I wanted the visitors to see that.

I chose to enter the project as I felt I had not only been pushing my own boundaries but also those of community engagement and site-specific illustration. I felt proud of what my team and I were able to achieve and wanted to share that with an audience beyond Wigtown. The AOI awards were a great opportunity to do so. 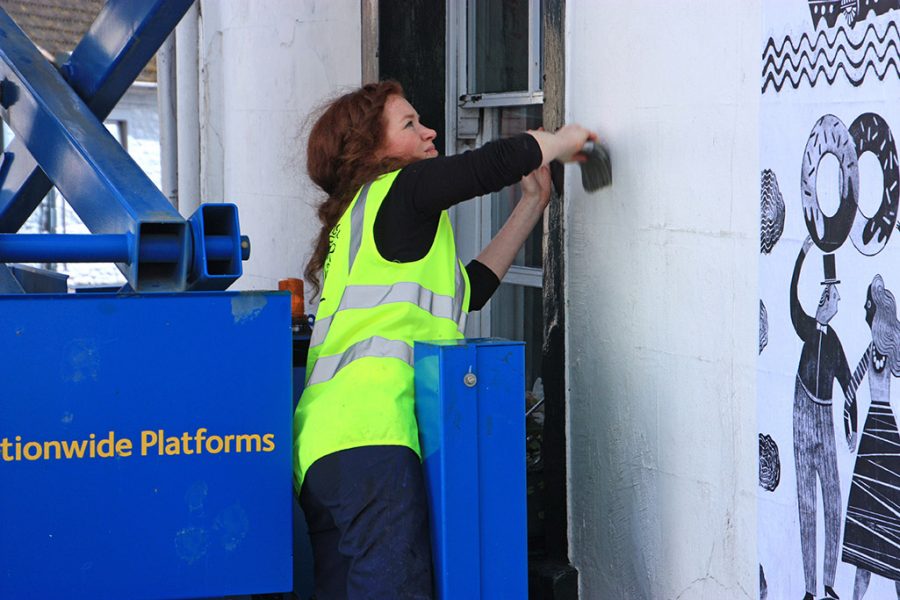 How has winning an Award developed your practice/career?
To be honest, I’m actually someone who rolls their eyes a bit when artists refer to themselves as ”award winning.” I don’t think the number of trophies one has necessarily means they’re  better than artists who have not won an award. But like many other illustrators I tend to work on my own and I can sometimes feel a little disconnected from the wider community. The AOI awards gave me the chance to meet other illustrators from around the word and hear their stories. I’m not great at promoting myself but this was a good excuse to spend some extra time in London and arrange portfolio viewings with potential clients. Having my work acknowledged by the AOI judges and other experienced industry officials was of course also a welcome boost to my confidence, which is always great.

The field of illustration is always growing and so are the ways in which illustration is done. This is reflected in the recently added awards categories site-specific illustration, exploration, and alternative publishing, making space for new and unusual ideas to be seen and celebrated. I would encourage artists who believe their work may not fit a conventional category to explore their options and to submit the work that excites you instead of playing safe.

Can you tell us about any forthcoming projects or your future plans?

My husband and I enlarged our family with a little daughter in October, so I have allowed myself to take it slow over the past couple of months. I have always had a keen interest in picture book illustration and have been developing some ideas. Having a child now makes me want to explore these a little further in the future. Amongst other commissions I’m also working on another narrative-based wallpaper project at the moment. The work will be applied to the interior of a café in a more traditional manner, so no ladders, large heights or heavy storms involved this time!

Find out how to enter here: theaoi.com/world-illustration-awards