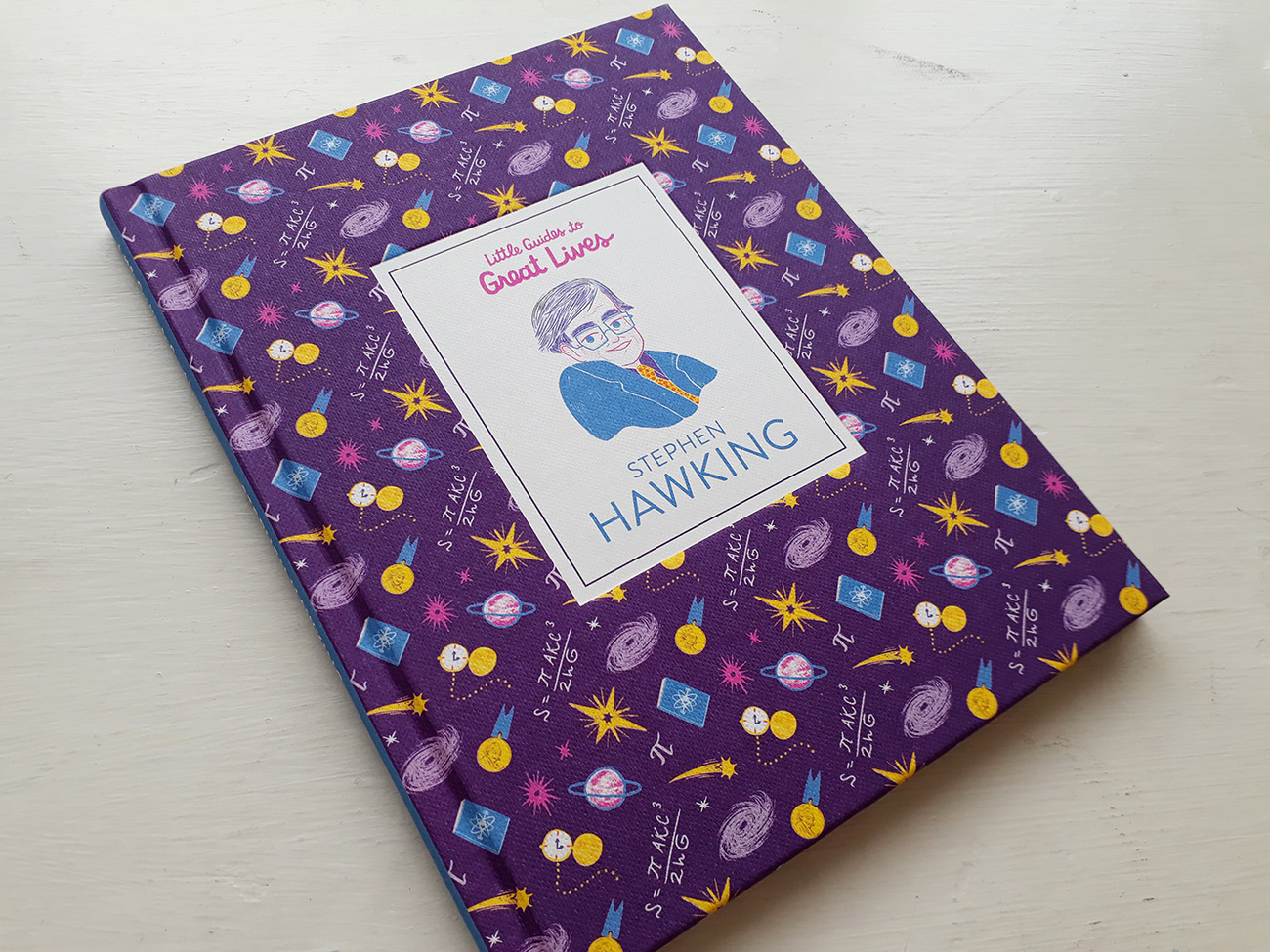 This title joins a great series of books, Little Guides to Great Lives, published by Laurence King. Part of the illustrious line up is Stephen Hawking, whose story is sensitively and energetically told by author Isabel Thomas and illustrator Marianna Madriz. 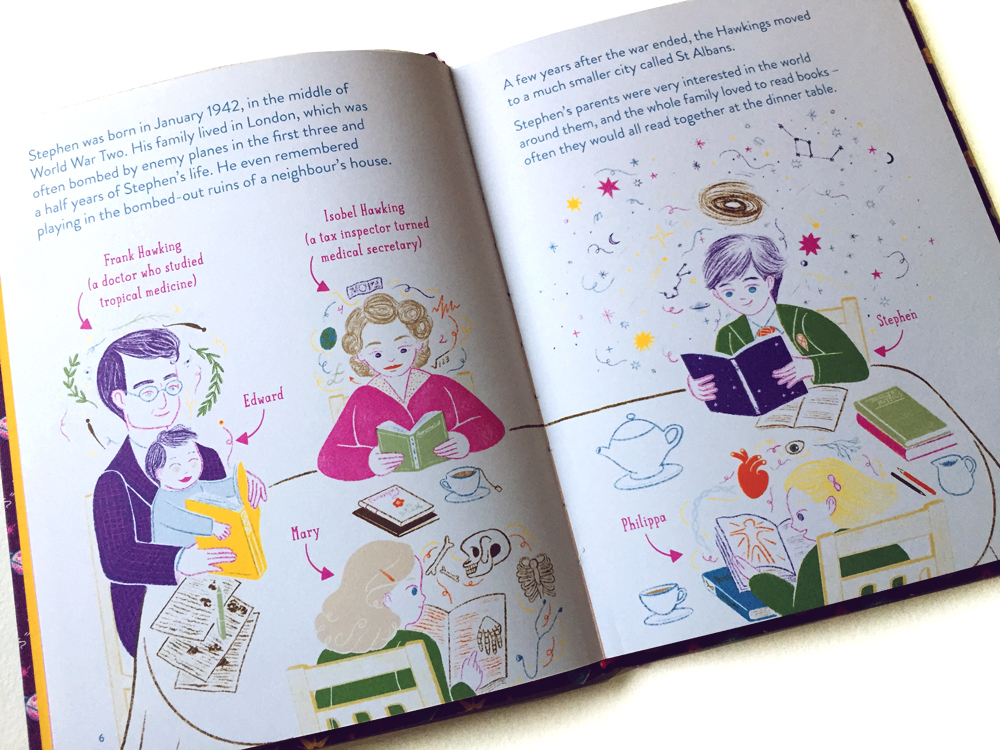 London based illustrator, Marianna – originally from Venezuela – divides her time between illustration work in her East London studio and working at the Association of Illustrators. I caught up with her to talk about Little Guides to Great Lives: Stephen Hawking.

RM: It’s a gorgeous book. You have such a distinctive style, with a lovely, pared down colour palette. How did you arrive at the set of colours for this book?

Before working fully on this title I was asked to do a sample first, showing a few portraits of Stephen and illustrating some of the elements that characterised him (some of which later made their way into the final book). At this stage I was able to suggest a few options for colours. I had to take into consideration the combinations that were used already for the rest of the series, and also the many galactic elements that would be present in this book: stars, black holes, planets, galaxies, and so on. The colours needed to pop, but also needed to create darker colours when layered up.

After giving it some thought I came up with a combination of electric blue, pink and yellow. Once I got confirmed for the project and LK trialed a few Pantone proofs, it was then decided to go for more subtle tones (but still the same colours). Later, as the book developed, we added a deep purple Pantone in the mix to achieve a better darkness. 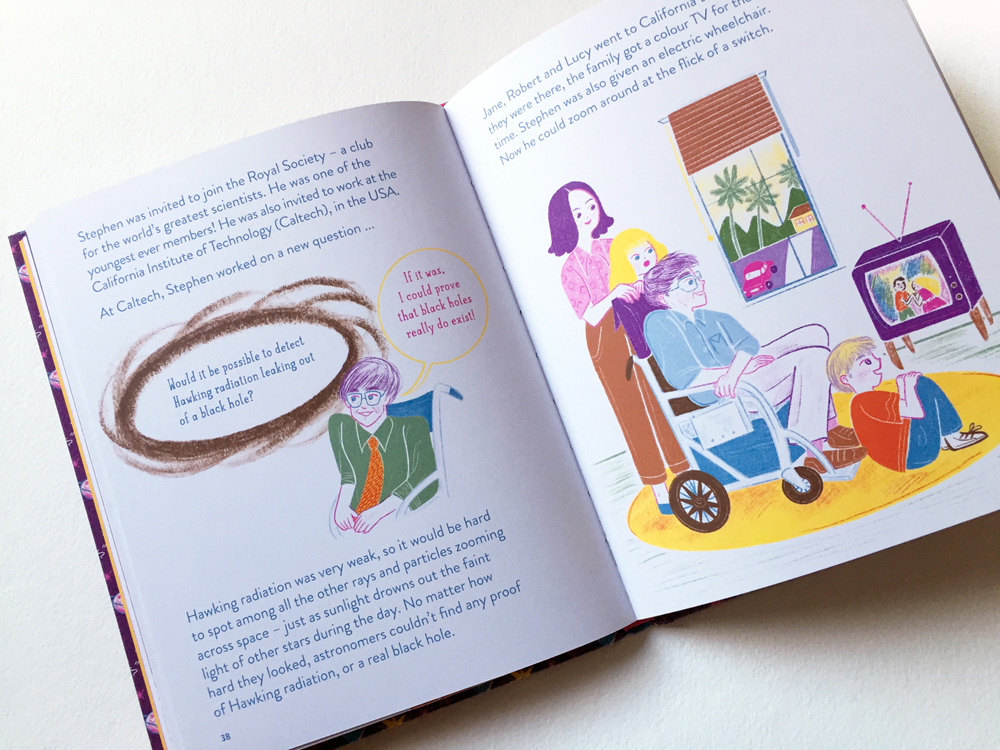 RM: What was your working relationship with the design team at Laurence King like? We’re there lots of discussions about the aesthetic for this book?

MM: I’m super happy to have a great relationship with Laurence King – we’ve previously worked together on ‘Little Guides to Great Lives: Frida Kahlo’, so we’d gone through the process already and we knew what sort of aesthetic was needed for this title (especially after having created the sample). The art direction is always spot on, with clear instructions of what to illustrate and where to position everything within the spread, and I also appreciate the freedom I get given to suggest other options if needed.

Some tweaks had to be done once the illustrations went to the Designers, but they were never anything too obstructive or time-consuming. Thankfully the projects are managed in a way so everything gets sorted at a rough stage, before proceeding to the final. 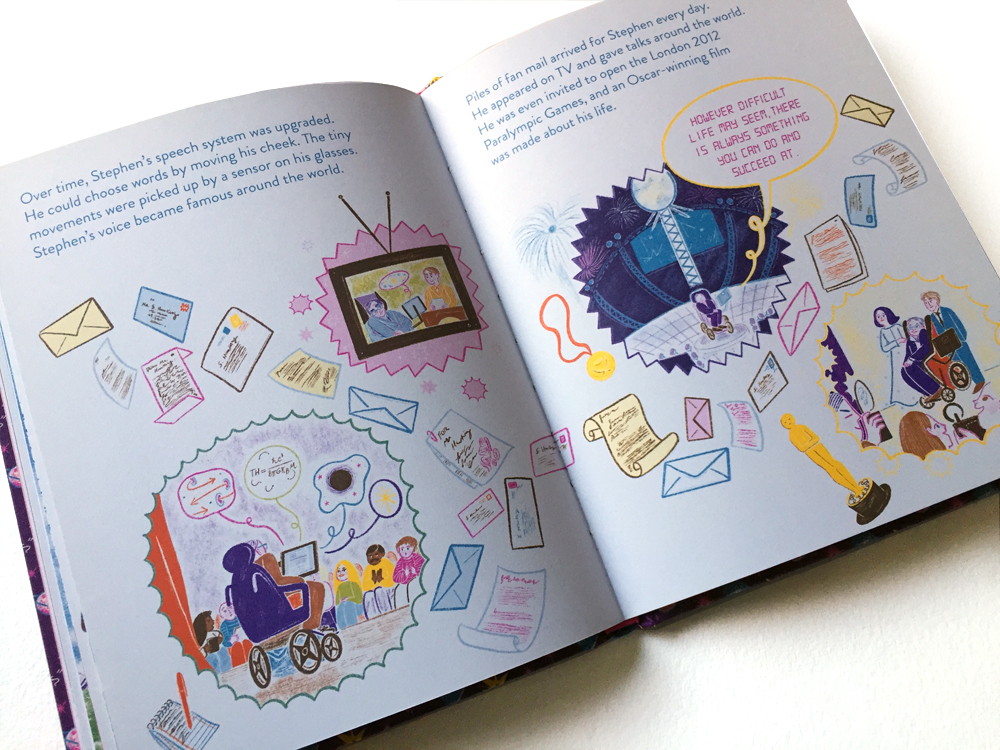 RM: You’ve captured a great deal of personality in the way you’ve drawn Stephen. What sort of source material did you use – did you do lots of sketches to practice capturing the changes to Stephen as he ages through the book and also as his motor neurone disease shows outward signs?

MM: When creating the sample, I put a few documentaries about Stephen’s life (and also some of his excellent comedic appearances) in the background as I did initial sketches. I had previously seen ‘The Theory of Everything’ but made a point not to re-watch the film during this project, as I solely wanted to focus on actual video footage and/or photographs. I tried to observe all the video references as much as possible to work out how his physicality changed throughout the years, and created a ‘visual timeline’ of sorts to make sure the character was always recognisable no matter the age. Throughout the sample work and final book I tried to achieve a balance, where I could visually enhance his charismatic personality whilst never down-playing his motor neurone disease. 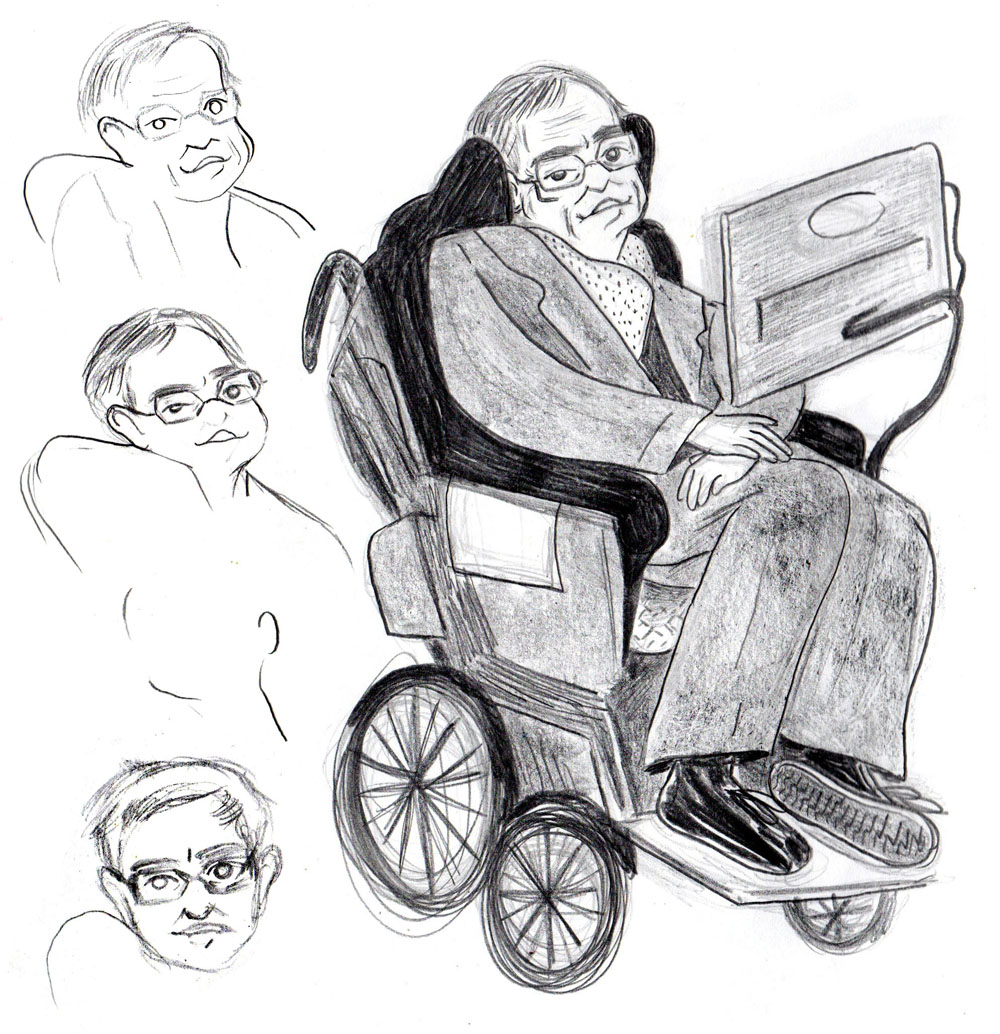 RM: And finally, what are you working on at the moment?

MM: I’m working on a few book proposals for future non-fiction and picture books, which I’m very excited about. Also I’m planning a 3-day workshop for young people which I’ll be delivering at a festival in Luxembourg next month, and recently I co-led a brief children’s event with author Isabel Thomas in Stephen’s hometown in Cambridge. Together we talked about the series and did some storytelling and drawing activities at Heffers bookshop. I love seeing how the kids react to the books, and whatever they end up creating – they’re not afraid to let their ideas flow and pour them out into the page, and I could certainly learn a thing or two from them!

Little Guides to Great Lives: Stephen Hawking is out now.