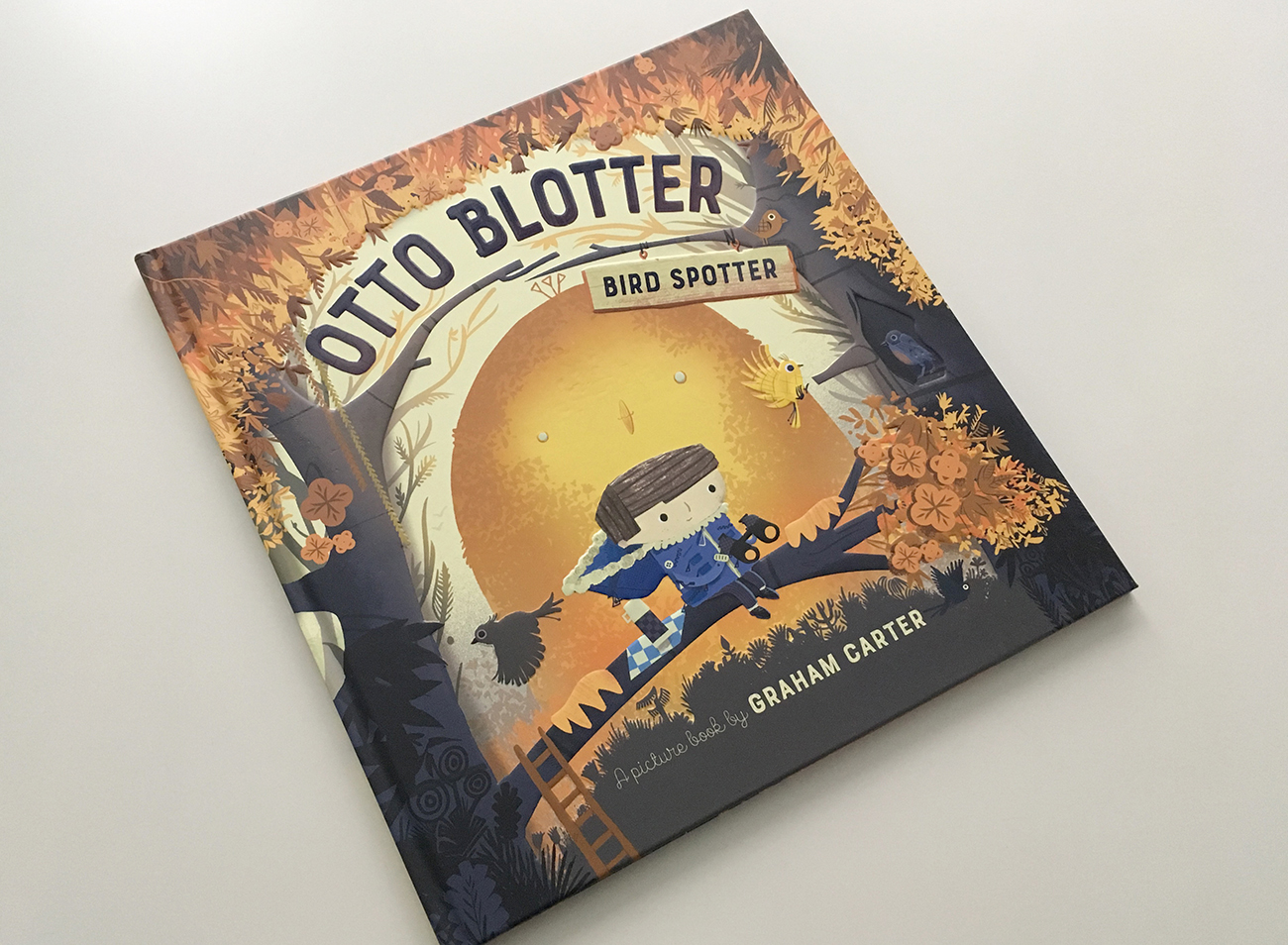 Otto Blotter is a fearless explorer whose curiosity takes him far and wide. As for his family they are obsessed with bird watching and rarely leave their house that has been converted into an enormous Hide. They haven’t much time for our hero – not when there are beautiful birds that need spotting. One day while out adventuring Otto makes a discovery that changes his life forever. 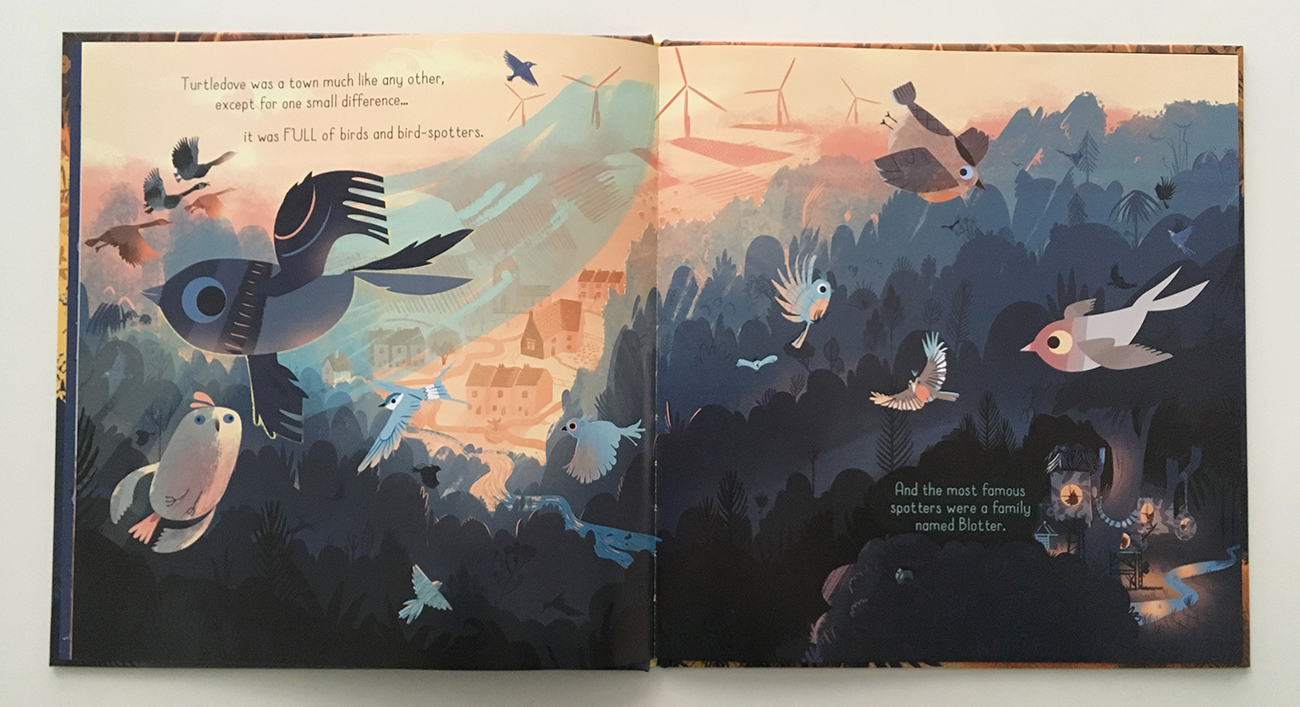 Otto goes on an adventure that ranges across a fully formed environment habituated in places by mostly passive human characters. He is the exception. This highly detailed illustrated book alive with textures and vibrant imagery is from the hand of artist and printmaker Graham Carter. The main excitement comes from his spectacular bird illustrations. The vivid colour and dynamic shapes helps to drive the narrative and grab our attention. 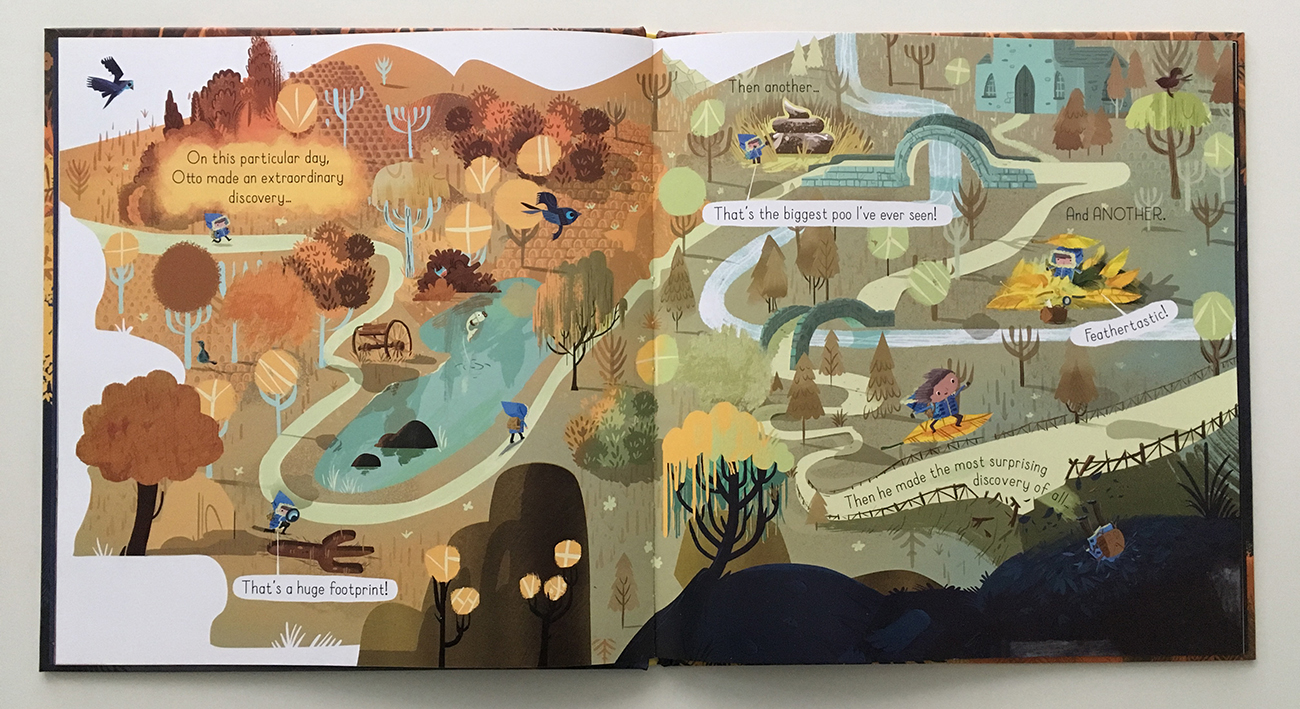 Otto discovers and ‘rescues’ a tiny bird that he secretly feeds and comforts. A bond builds between them, but as time goes by the bird becomes enormous. Just when Otto thinks his secret is about to be revealed the bird decides to display its unusual and delightful powers. 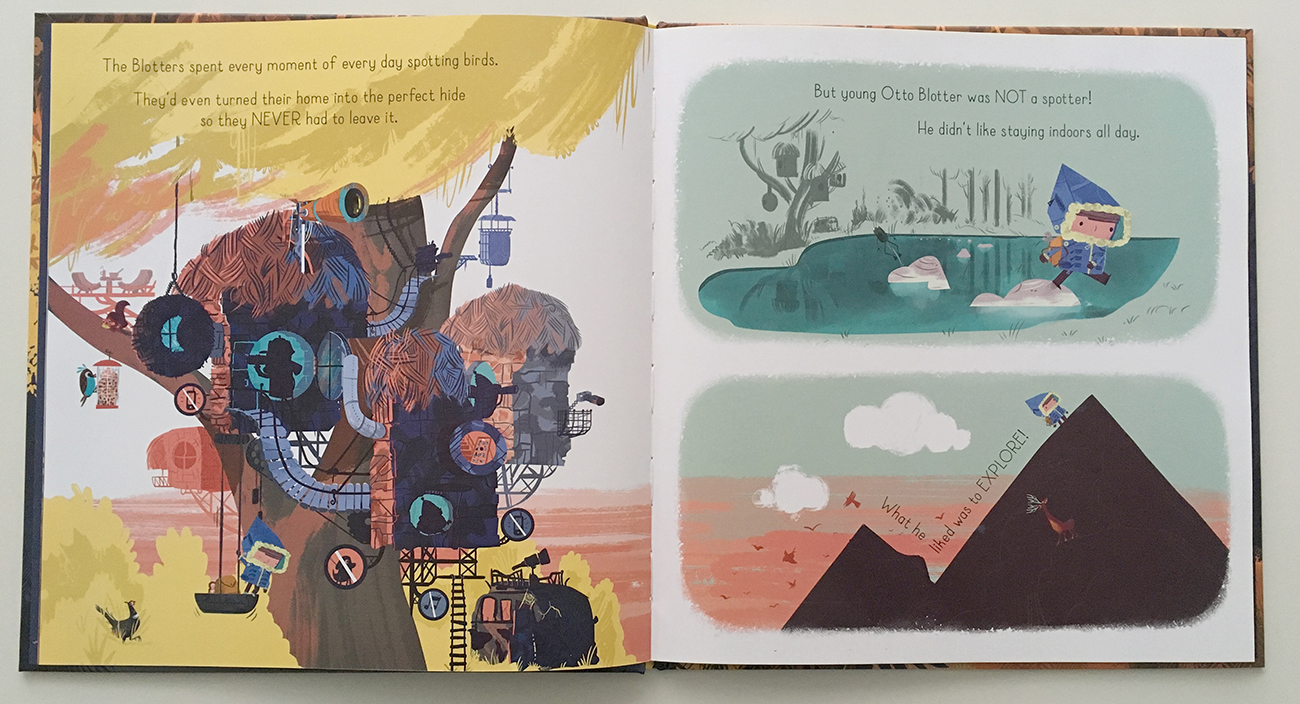 The energy in this book shines out from the artwork as Carter uses every square centimetre of the pages to reveal new surprises and give the story depth. The digital paintings are quite dark with the colours being very sophisticated for the intended age group however the palette selection comes into its own once the bird’s final special power is on display. 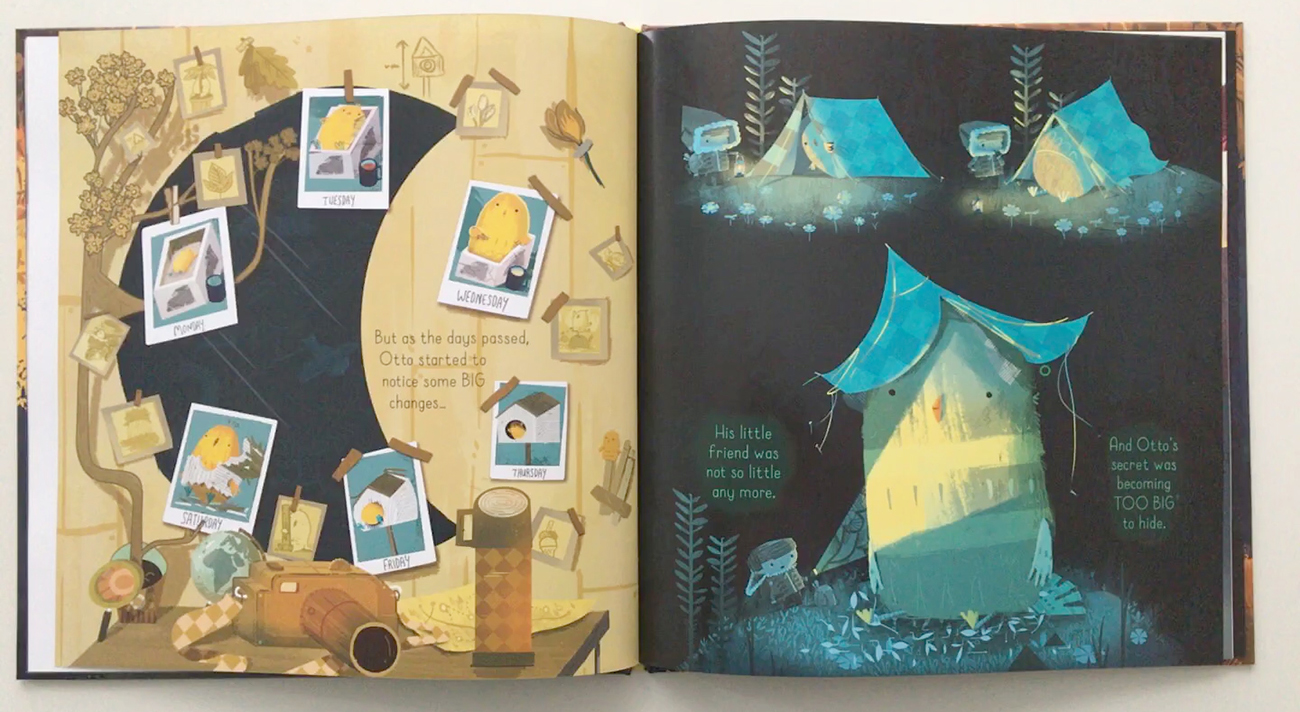 The cover of this hardback book uses varnish and embossing to make a tactile statement. The bird at the centre of the cover is subtle and stylized into the shape of an arched window; a window that leads to indigo end papers that give us some clues as to what the story is about. The narrative gives me the sense that this is only the beginning. I would really like to see a series about the Blotter family and their unusual location. 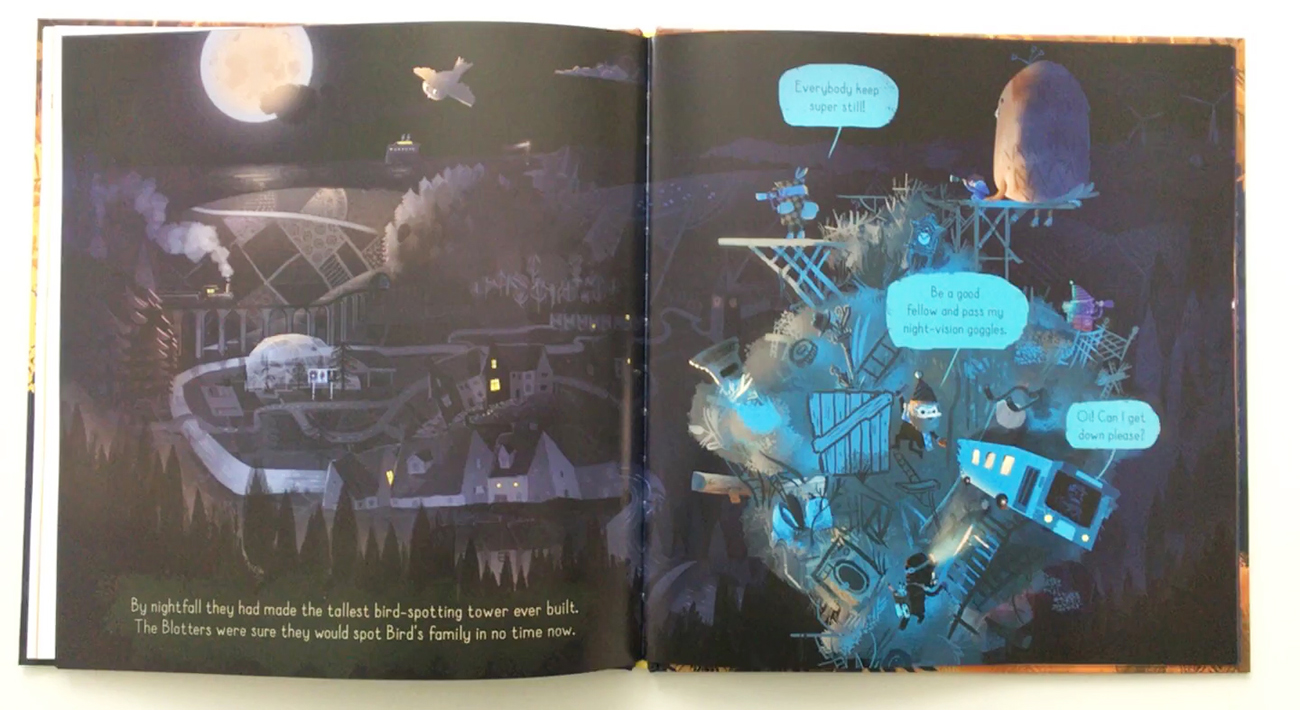