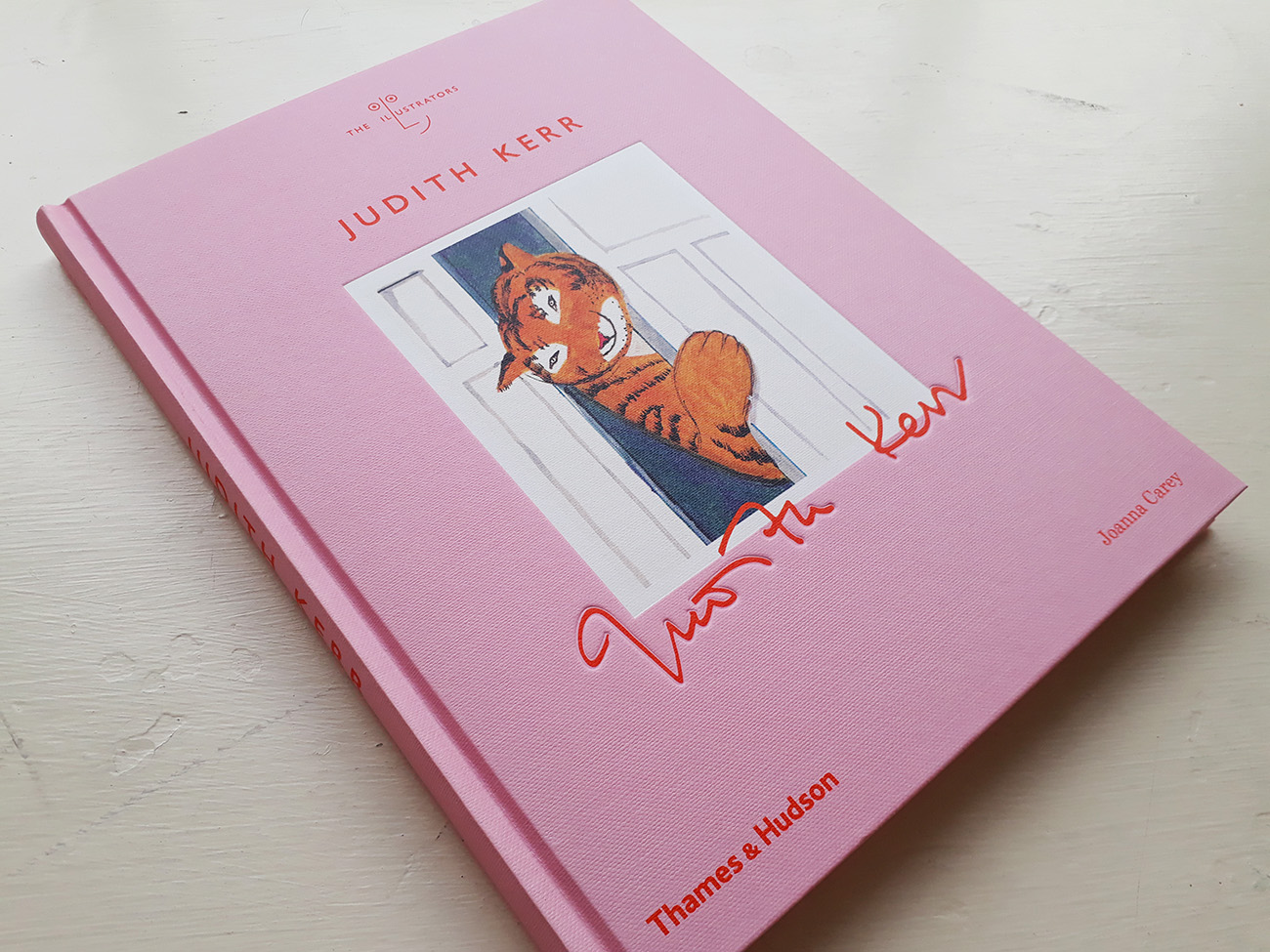 Judith Kerr was a legendary illustrator, the creator of many a beloved bedtime story, and the keeper of a myriad of other soft charming characters bursting from the pages of her books. From Mog, to The Tiger Who Came To Tea, Kerr’s creations have been part of childhood for several generations now. It is about time for a biography.

The latest in the series of ‘The Illustrators’, Judith Kerr joins Posy Simmons and Walter Crane in the list of subjects of Thames & Hudson’s biographies. The series itself has been very thoughtfully executed, each of the covers colour coordinated and bound in a textured and embossed fabric that makes each an attractive object to have on a bookshelf. 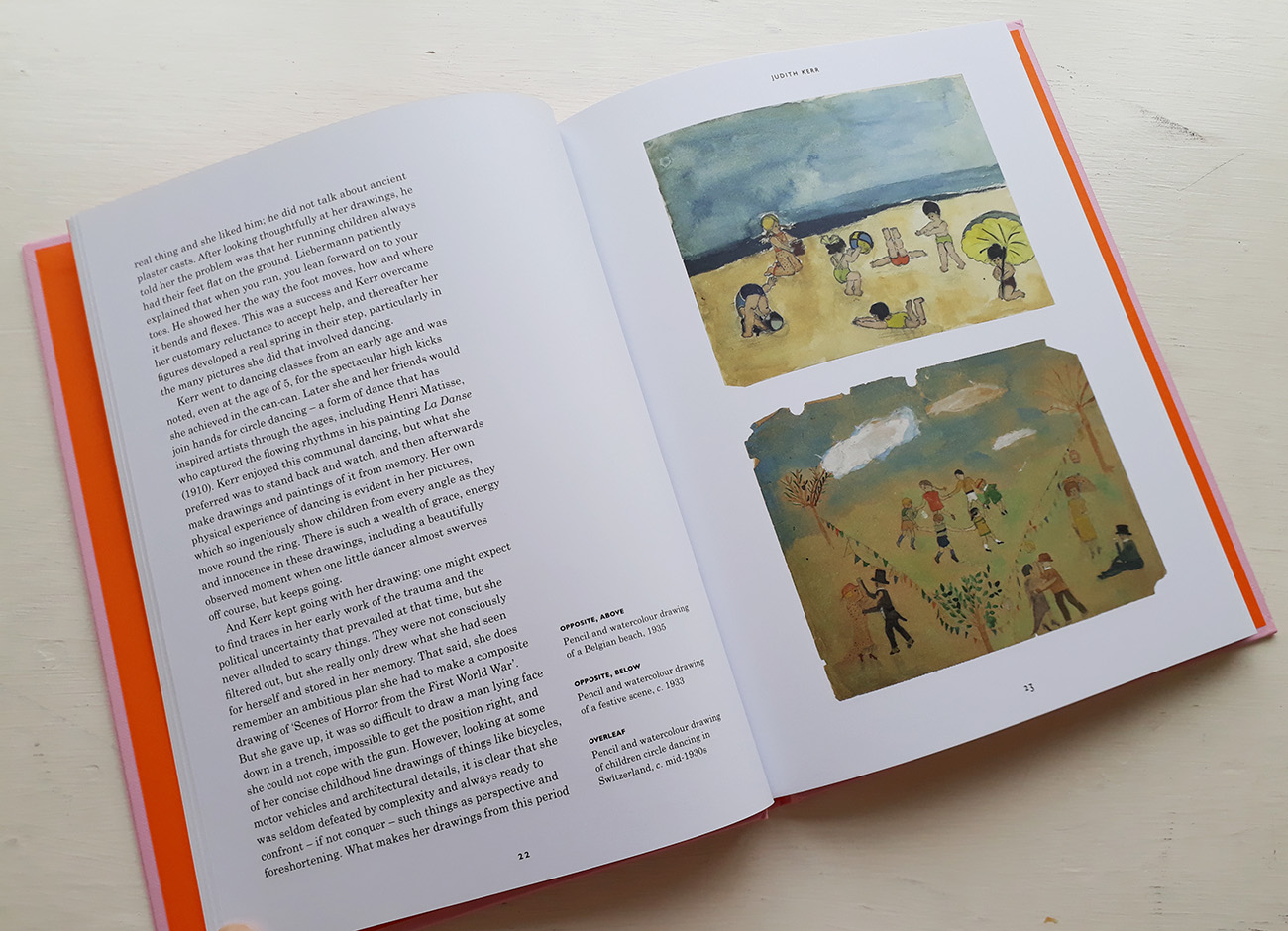 The content itself follows Kerr’s life in the words of Joanna Carey, from early childhood through to the first years of her life as an illustrator, worldwide success and her later years. Written before Kerr’s death in May 2019, the wording now reads oddly, putting Kerr and her contributions in the present tense, often with Kerr speaking directly to the interviewer, but obviously has been written with a great deal of affection and with a close collaboration with the subject herself. Many of the observations of Kerr clearly have been made first hand, such as her approach to creating work, and show an intimacy between the writer and the works of the artist.

‘She tends to stare thoughtfully at a line for a while, before gently urging it along, encouraging it…she will let it run free for a bit, while she thinks.’ 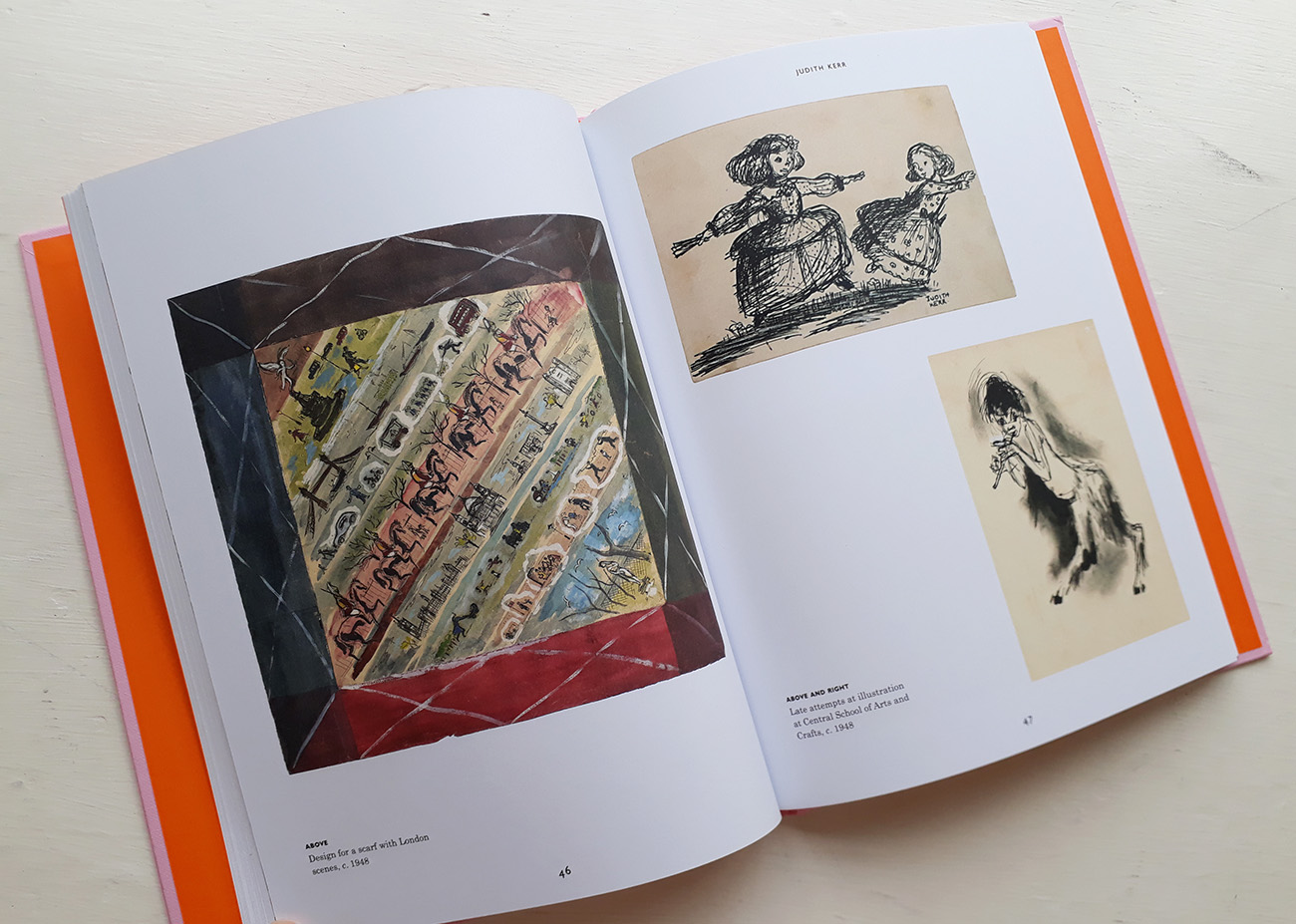 The accompanying examples of Kerr’s work are spaced evenly throughout the text, with small images strewn around the book, and large double page spreads breaking up the format. The layout of each page therefore varies, with the text margins starting at different intervals, and leaves some images to appear stranded in blank space, not doing all of Kerr’s colourful and charming images justice. The variation is an interesting design feature, and keeps the reader on their toes as they travel through the book, but does not seem to compliment Kerr’s particular style, and often has some images falling flat. 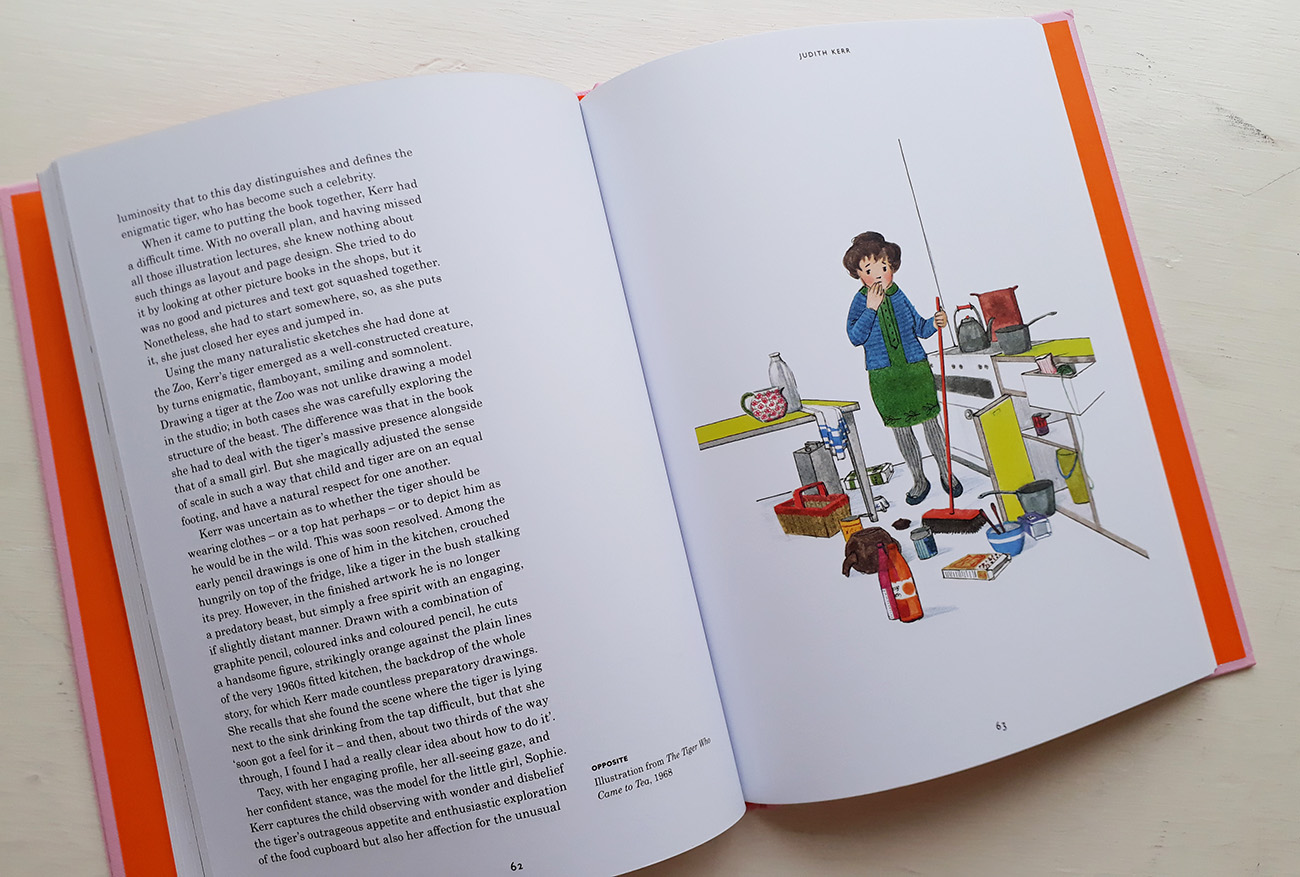 That is not to say, however, that the curation of the images is completely lacking. Some of the examples of Kerr’s early work and sketches are unusually presented, and allows for a better analysis of the prolific illustrator’s stylistic evolution over some ninety years. Photographs of Kerr’s family also helps to add a face to a hand, and to show the extraordinary childhood she and her brother had escaping Nazi Germany, later to become the background to When Hitler Stole Pink Rabbit. Likewise, the inclusion of many of the preliminary sketches help to blow life into the characters Kerr created, with felines of various forms appearing frequently. 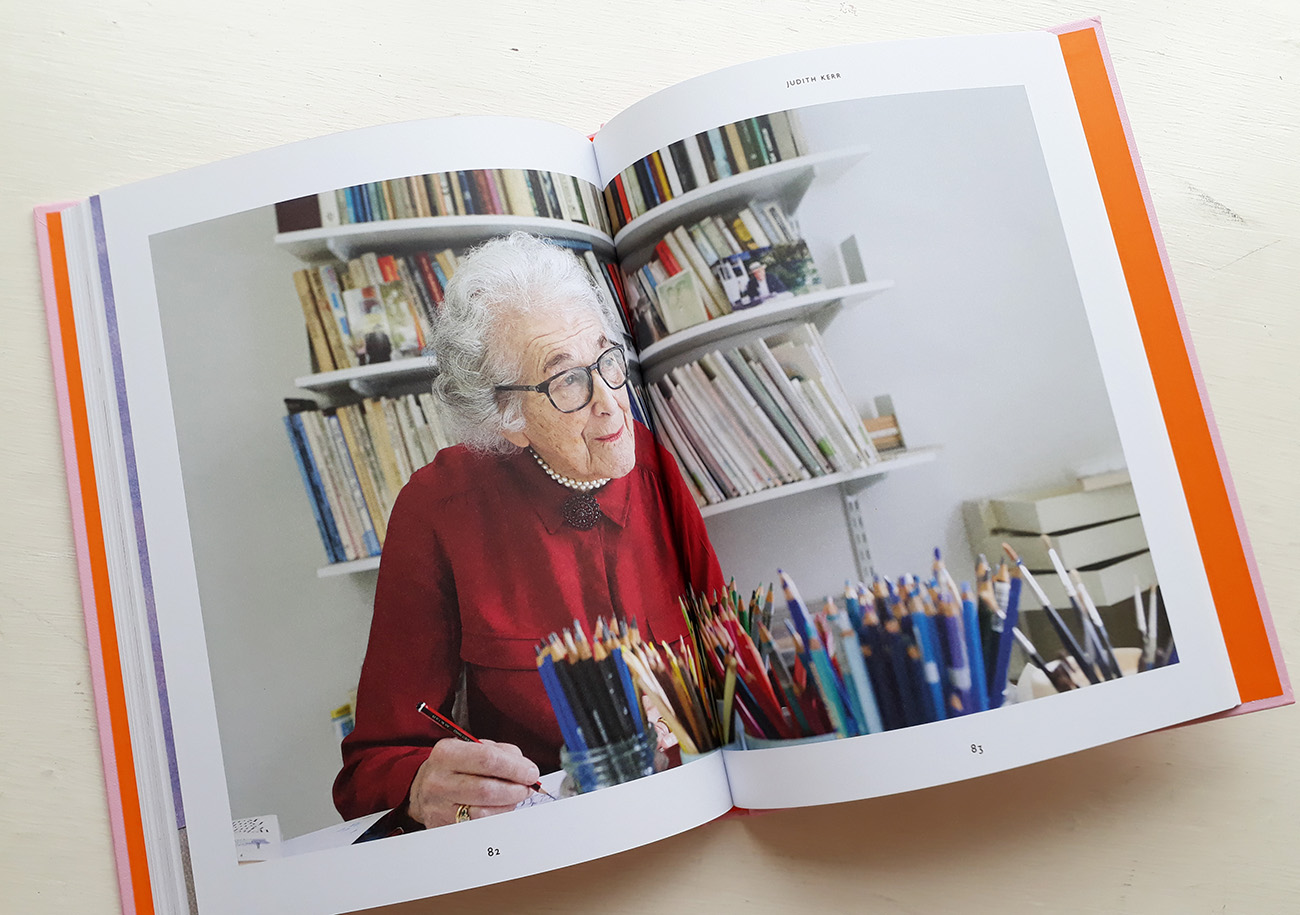 For those who hold Kerr’s work dear, this is a book to have, to look at, and to reminisce. Her legacy is laid out by the author, across her forty-five books, and her life had clearly been one that she took a particular pleasure in. Carey’s writing is affectionate and engaging, and keeps alive the little twinkle in the eye of Kerr the illustrator. 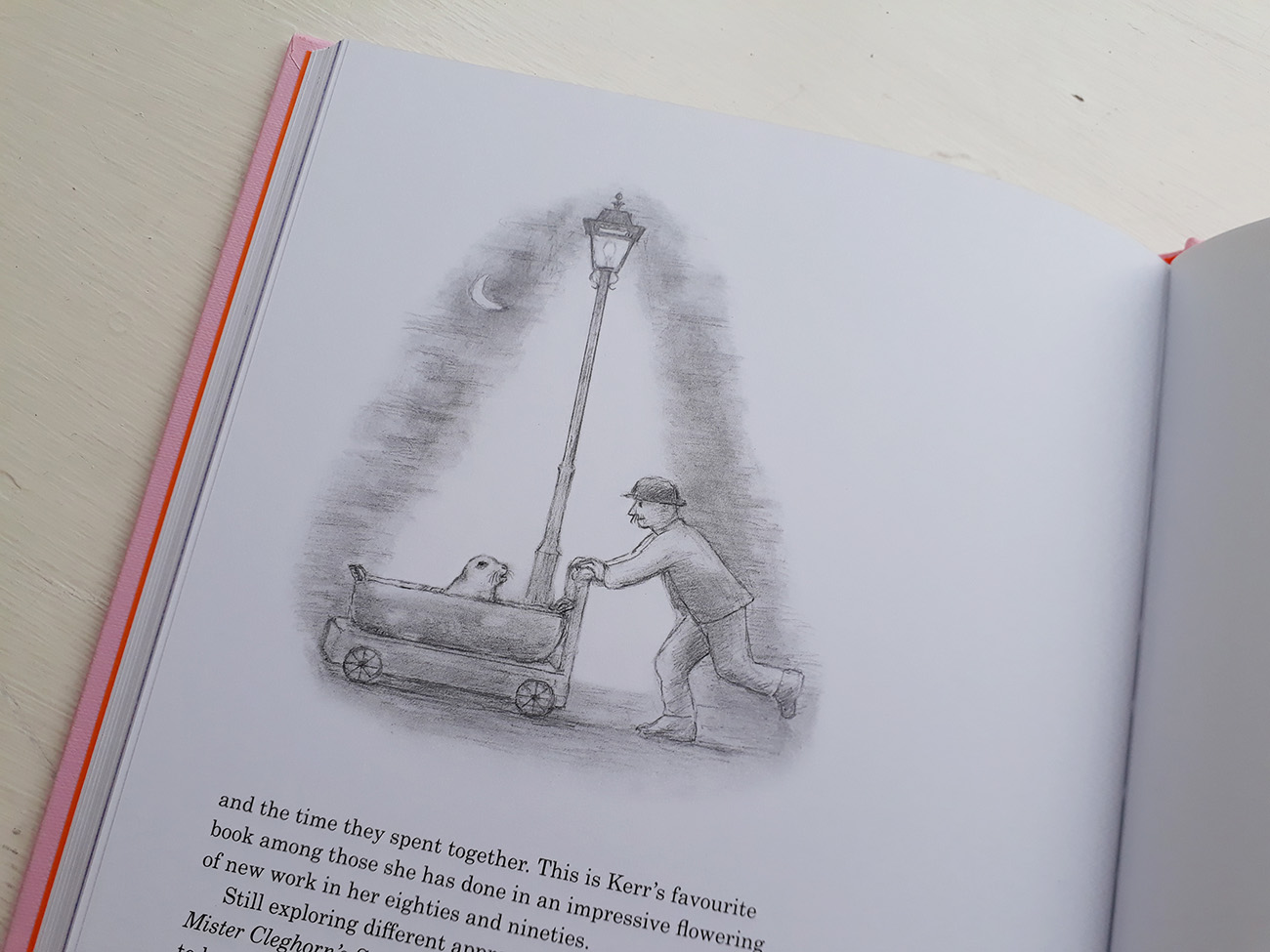