Eleni Debo is a Belgian illustrator living in the Italian Alps. Since finishing her master’s degree in visual arts in 2015, she makes illustrations for books, prints, editorials and campaigns for a wide variety of international clients.

It is always such a pleasure to illustrate for De Morgen as they generally give me a lot of freedom to work with a subject. Because of this, I felt confident to approach this assignment in a more experimental way. I ended up really enjoying working on this illustration, and loved the opportunity to incorporate cubist and futurist style.

I was asked to create three illustrations for a three page spread article in the weekend edition of the paper to accompany Kristen Roupenians’ short story “Cat Person”. The article discussed how even consensual sex can turn bad, and how difficult and taboo it is to want to stop something to which you initially consented. Things can start out rosy and exciting, but can turn out for the worse and leave a bitter experience. The brief was given to me on Tuesday at noon and the finals needed to be sent by Friday morning.

After reading through the article brief and the short story ’Cat Person’ by Kristen Roupenian that was discussed in the article, I picked up the phone and had a chat with the article’s author Cathérine Ongenae to make sure that my focus aligned with hers.

Process
My original intention was to paint the illustration in gouache and aquarelle, which I would then scan and clean up digitally. I had already set up my base sketch on gouache paper, mixed my colors and had just started painting, when I noticed my mistake in choosing a format too small for my painting. Working in this format wouldn’t have allowed me to paint the illustration with the amount of detail and sharpness I had in mind, at least not within the deadline I was facing. Given I only had about two days to finish the illustration (which was actually three illustrations pasted together as one), and I had already spent about half a day on this faulty set-up, I decided not to take any chances and painted the illustration digitally instead. Setting up the base of the illustration digitally saved me a lot of time, and I ended up making some analogue paint strokes that I scanned and overlaid on the digital drawing, adding the painterly effect I had originally envisioned. 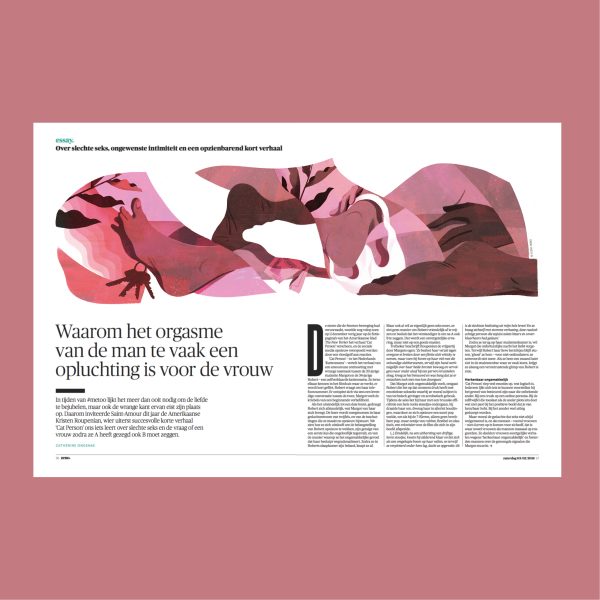 The combination of the digital base drawing with the scanned analogue paint strokes proved to be a really useful technique for me when working on short deadlines, and I still frequently use it.

At that time I was also working on a book cover for the novel Merg by Tine Bergen. I was reading the novel manuscript around the same time I was working on the illustration for De Morgen, and for some reason the novel about the broken relationship between three mothers and the fragmented illustration style I was using for the newspaper illustration really connected for me. So these two projects definitely ended up inspiring each other. 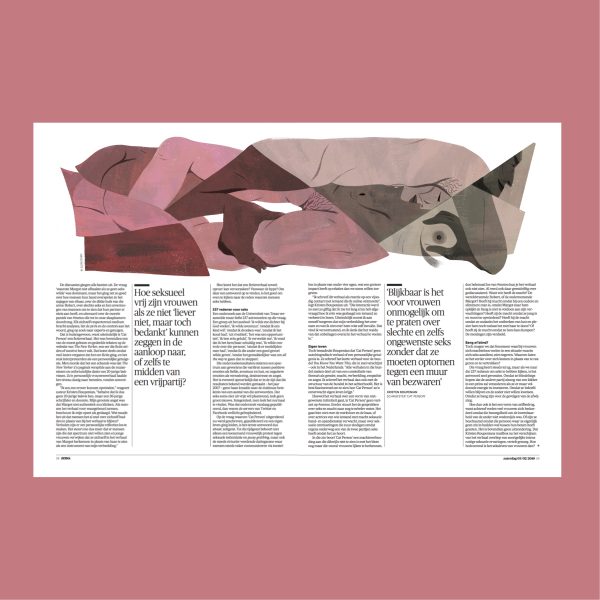 3 illustrations in 3 days for a 3 spread article.

Working in editorial illustration, especially when dealing with short deadlines really forces you to smooth out your workflow. When I was just starting out as an illustrator, I almost exclusively did editorial stuff, especially the half-day-deadline jobs. These jobs really were a ’slap in the face’ that gave me an incredible adrenaline rush and forced my imagination in a way the long deadlines I was used to from my art education never managed. I felt like in just half a year of doing these kind of editorial jobs I had learned more than four years of education would. Not to say that I did not benefit greatly from my years at the academy, but the fast-paced world of editorials really was like a crash course in professional illustration. They forced me to work faster and to develop a streamlined method of generating concepts and sketch proposals. Although these days I prefer taking on projects with longer deadlines, I am 100% convinced that my work would not have developed as fast as it did without these stressful,rush-jobs I did when starting out. So I can really recommend starting illustrators, or any illustrators really, looking to boost their workflow, to take a plunge into the deep end of editorial rush jobs. 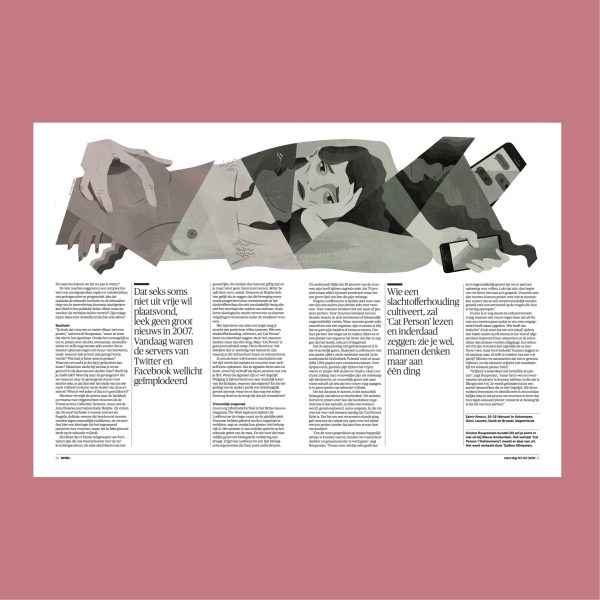 As much as I enjoy editorial work, I’m eager to jump onto a more ’physical’ illustration project. I’m just quickly going to take this opportunity to shamelessly self-promote here, but if anyone happens to have an empty wall just screaming for a mural, or a carpet in need of designing, I’m your woman!