News / Reviews / The Power and Influence of Illustration – review 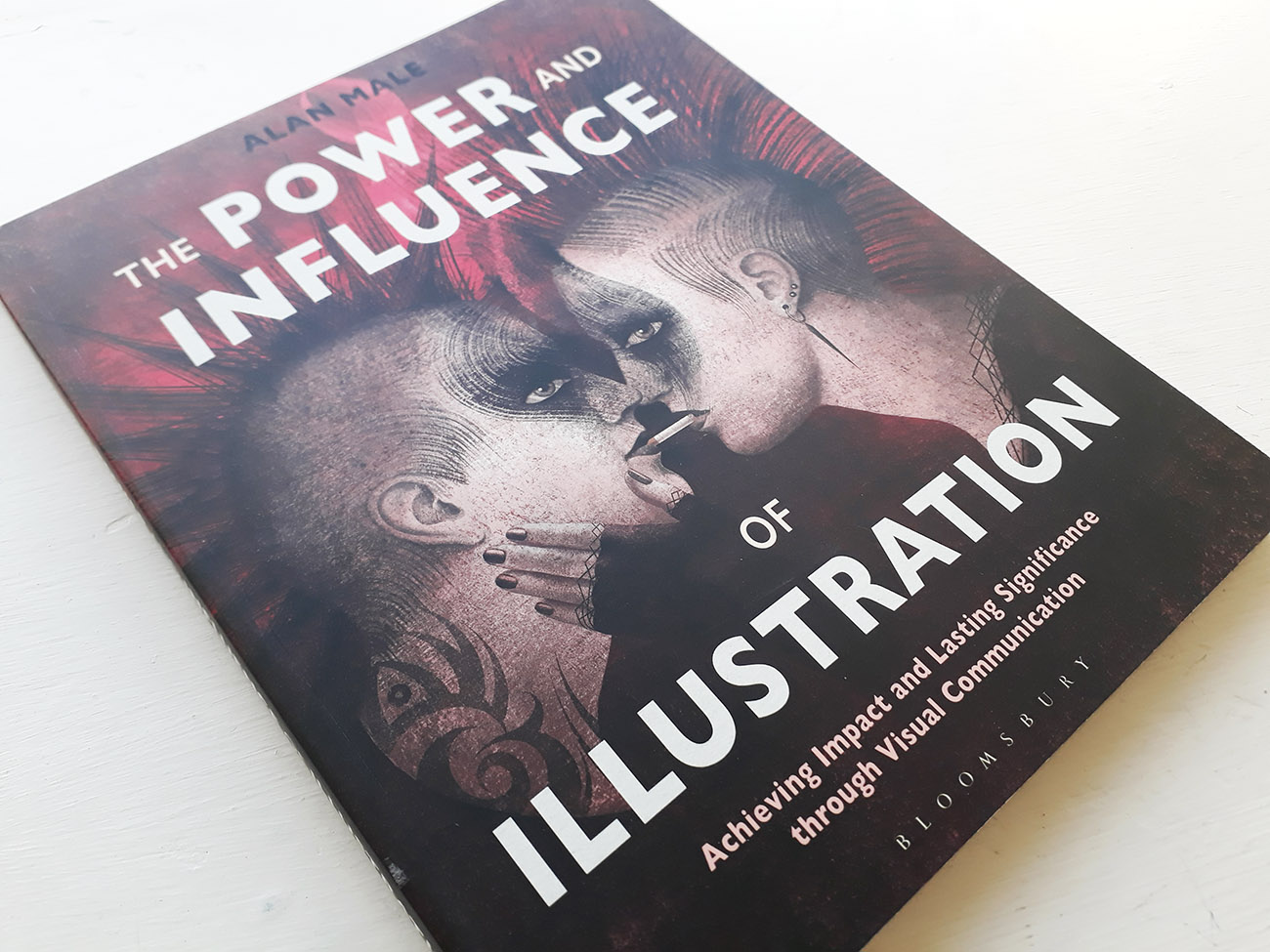 In a mediated world where images abound, meaningful books that consider illustration as a valuable cultural force are still as rare as hen’s teeth. Hats off then to the publication of this extensively illustrated tome from Alan Male, Emeritus Professor from Falmouth University, who writes authoritatively on the subject, moving through eras to provide a survey that focuses specifically on the notion of the message, impact and significance of illustration. 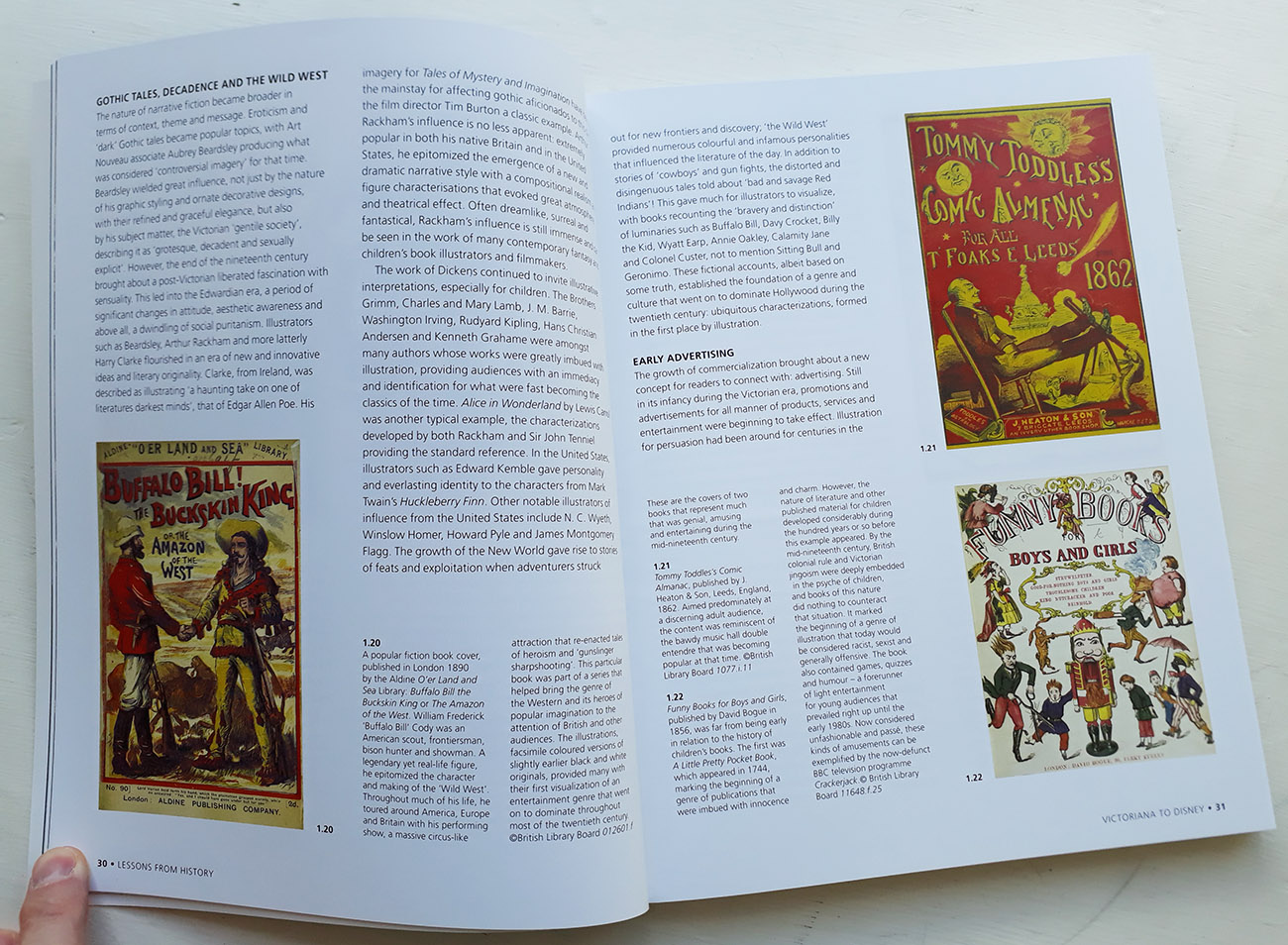 The Power and Influence of Illustration provides a whistle-stop historical resumé that helps define key facets of illustration from a broad perspective, including images that reflect the evolving functional role they occupy culturally. As well as including the recognised icons of illustration such as Tenniel and Rockwell there are more eclectic examples from contexts that include stamps from the cold war and an advert from 1908 for OXO cubes.

To provide an extensive historical survey within a chapter of 25 pages is an impossible feat, but the gaps within the selection in this chapter might reflect a bias that seems to permeate the book: certain types of imagery have more value because of the seriousness of their intent or message. 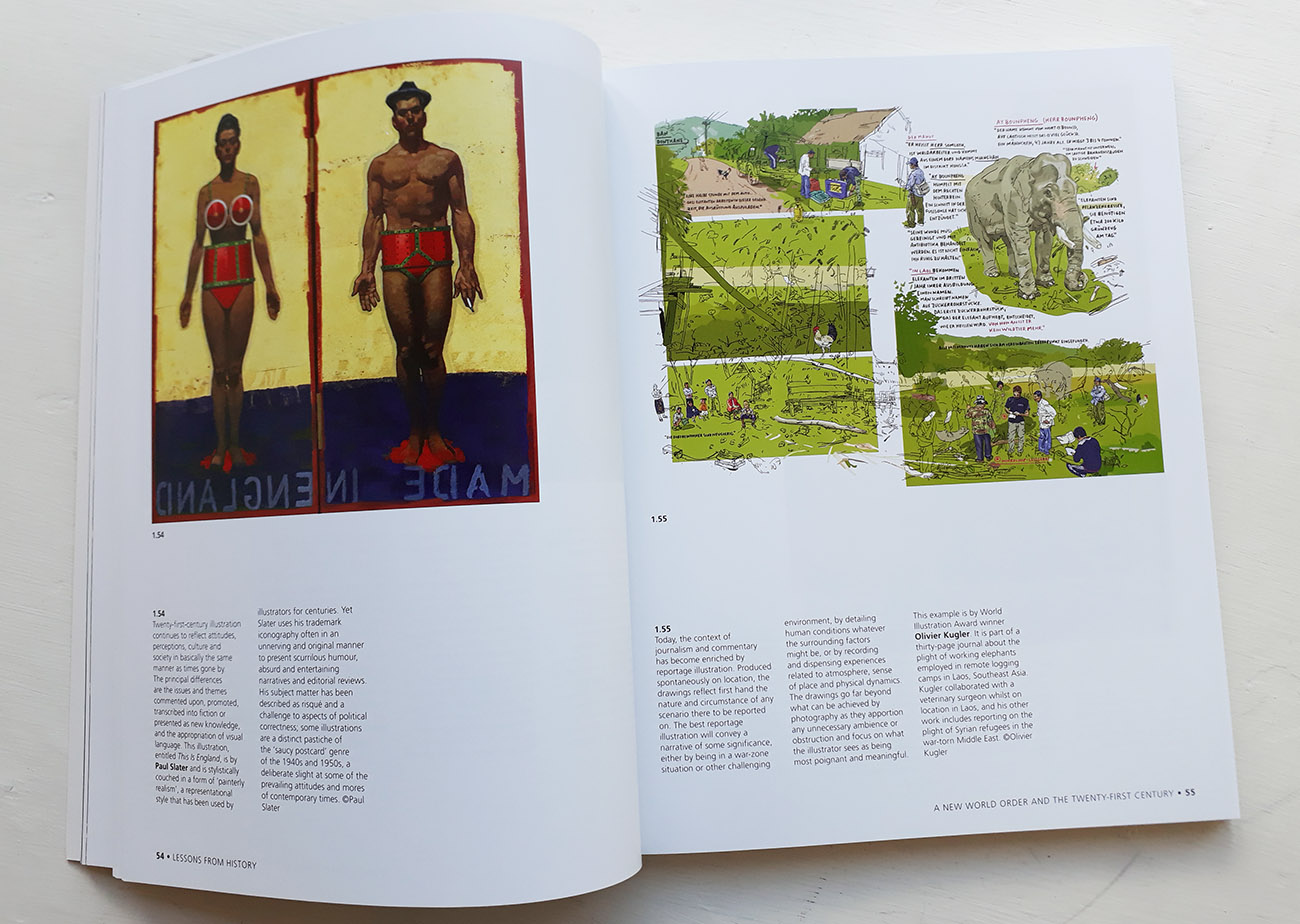 Within the text it is stated that, “a principal criterion for judging contemporary visual communication will be its impact and standpoint: the strength, thrust and provocation for argument, opinion, consequence and effect.” There seems to be disproportionate absence of imagery that may be described in terms such as lyrical, funny, or decorative, images that equally have had cultural significance. As an example, the potential for power and influence within children’s books is a huge omission across the book, especially given the blurb suggests this book looks at how contemporary illustrators can use their work to persuade and educate.  As a result it can seem rather dense with certain types of imagery with other genres marginalised in places – the design of the book making it more of an earnest textbook than a seductive read. 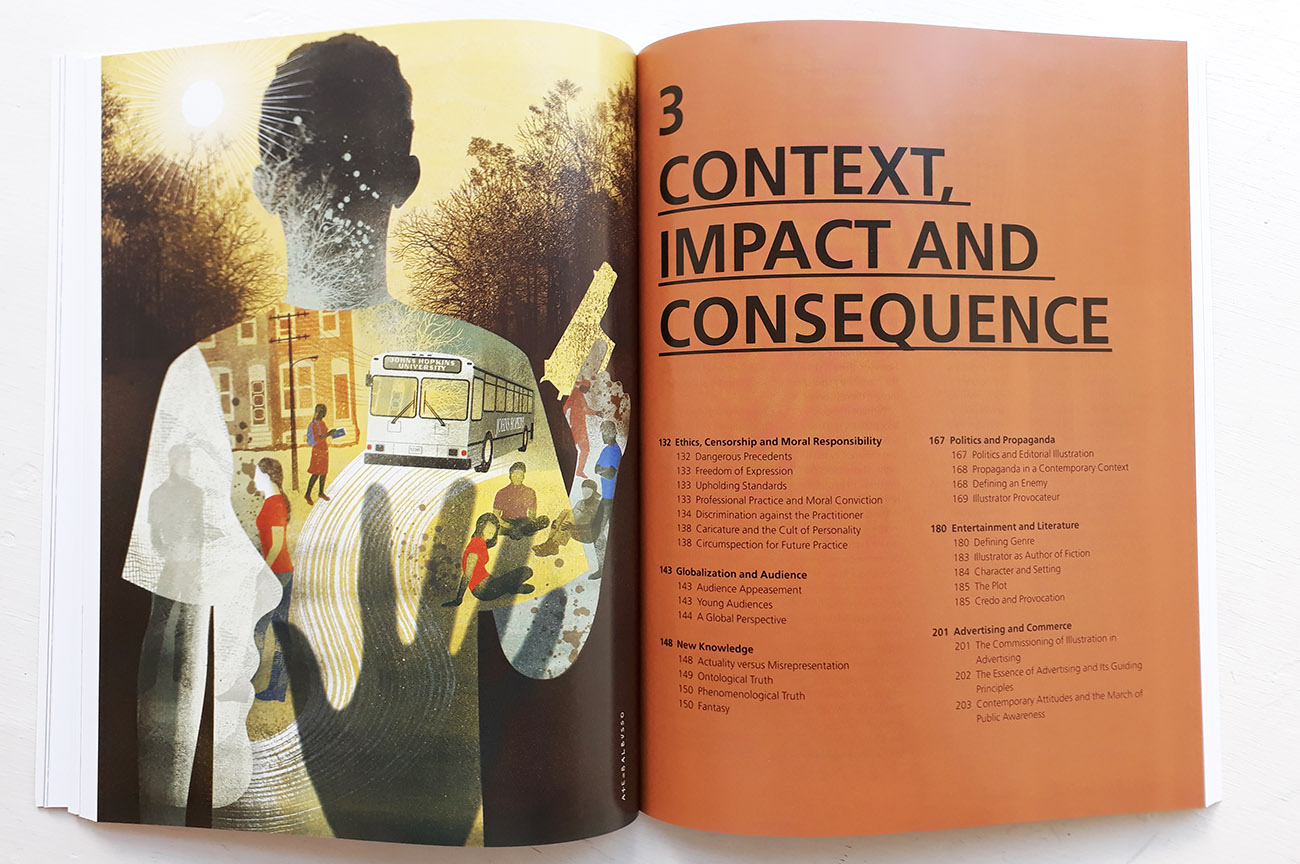 As many universities have shifted in their legitimisation of illustration away from its professional or vocational realities towards the theory of the subject, some of the clear and straightforward deconstructions, using the language associated with semiotics, provide a useful reference of key terms relative to the paradigm of the subject. This makes the book a rich and valuable resource for a student struggling to evaluate illustration from such a structuralist perspective.

The tone of the text is inconsistent in places, with some content less easy to access from this perspective. Although this ambiguity in where the book is pitched seems to be perhaps one of its deficits, the bite sized chunks of texts offering an evaluative perspective on the selections of imagery provide useful signposts that a surfing reader can access easily, yet it also contains ideas and examples of imagery that will also appeal to more seasoned thinkers within the field. Any disparity does give it a broad appeal and doesn’t detract from its value as a rich book to dip into. 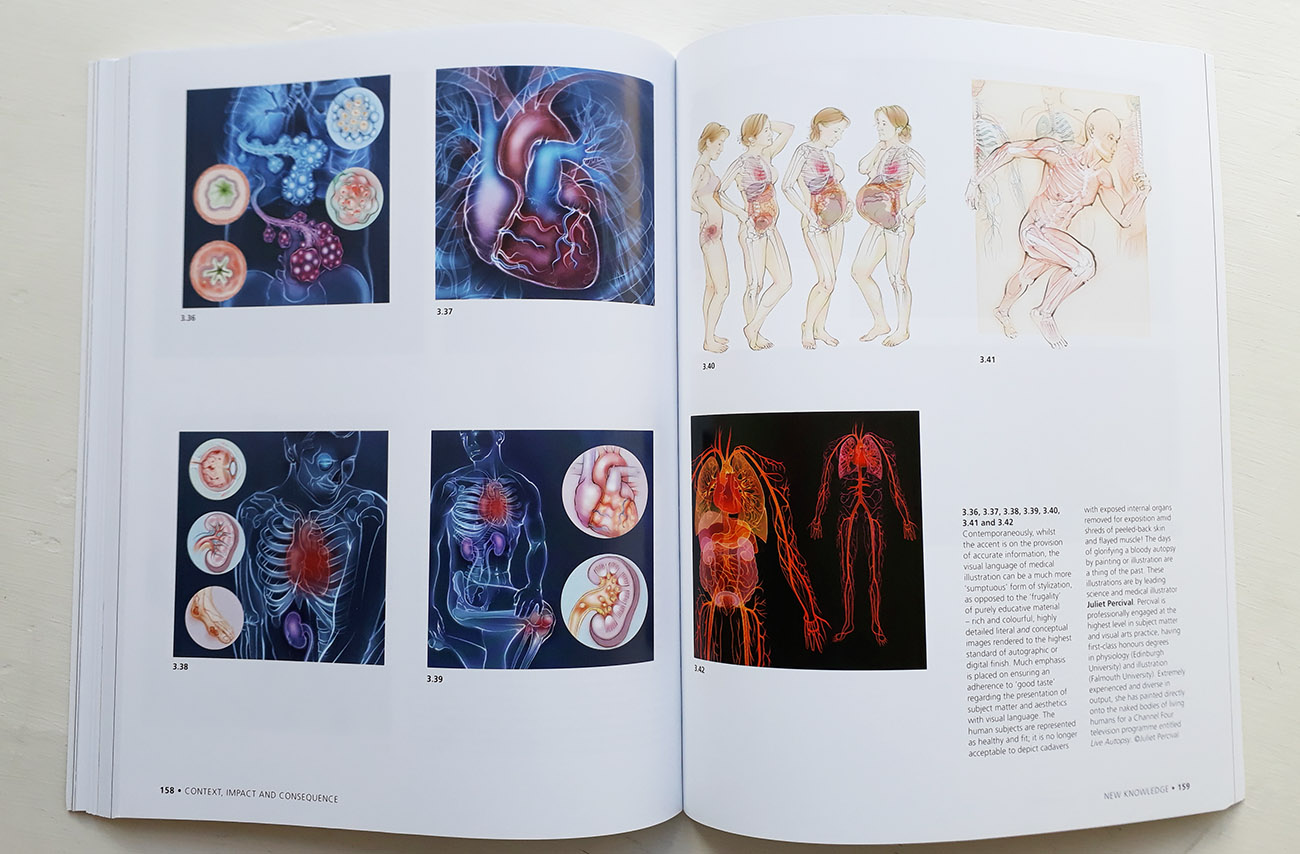 Some more knowledgeable readers may find some of the definitions and language rather generalised in places. As an example there seems to be a polemic between what is referred to in the text as safe commercial illustration that is described as “heavily directed and ambient” and work which is described repeatedly elsewhere as less “compromising”. Given that the examples of artwork include illustrations that have been used in advertising campaigns and for design contexts that are generally heavily art directed it would be interesting to see how they have been interrogated or substantiated within the context of such labels.

It is a treat to find such an intelligent collection of illustration within one publication and as a compendium of imagery that seeks to influence around certain types of message there is much here to be recommended. Although such a broad text cannot provide great depth in any one specific area, cumulatively The Power and Influence of Illustration provides significant opportunity to gain a depth of understanding about the subject of illustration. This is a beacon amongst the more superficial monograms that merely offer surveys of style and it deserves a place in the best of libraries and bookshelves of students and those interested in the field. 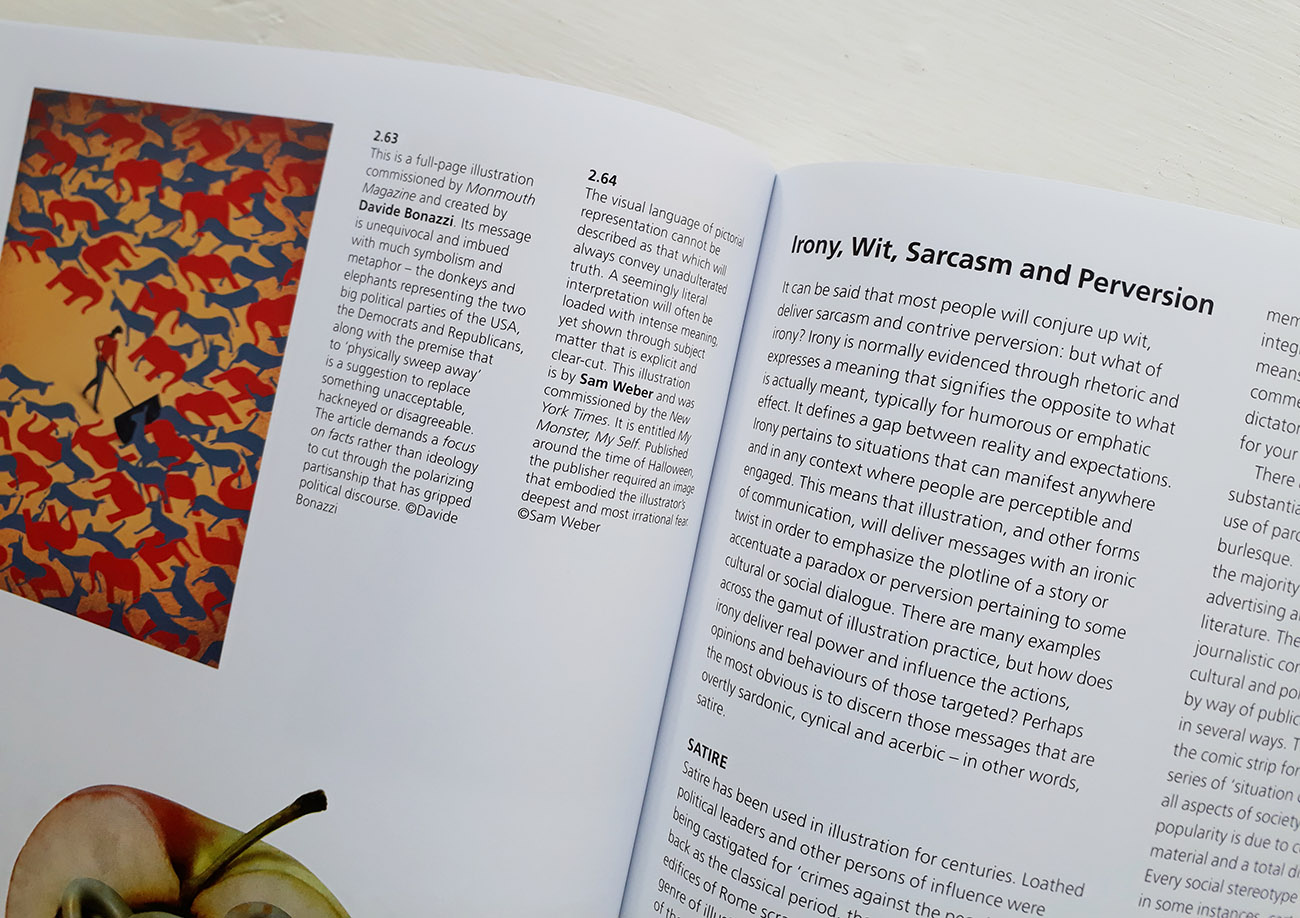 Jo Davies is Visiting Professor of Illustration at Plymouth University. With Derek Brazell she is co-author of several books about illustration and is recognised as an educator in the field internationally. 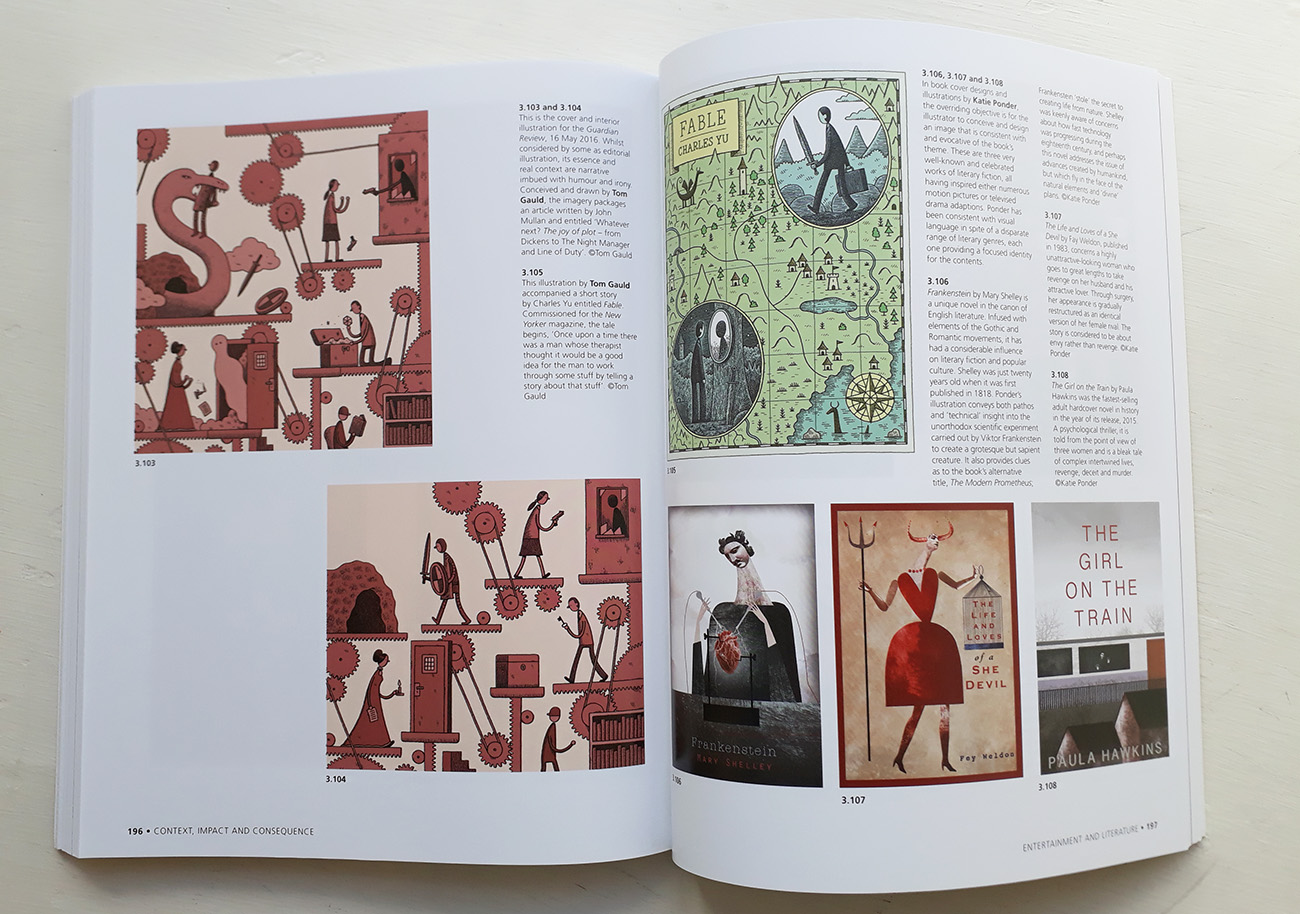 If you’re interested in further viewpoints on this book, see Karl Foster’s review on his blog.