The shortlist for the 2019 Klaus Flugge Prize has been announced at a live event at Foyles, Charing Cross Road, London. Set up to honour publisher Klaus Flugge, founder of Andersen Press and one of the most important and influential figures in children’s picture books, this important new award is for the most promising and exciting newcomer to picture book illustration. 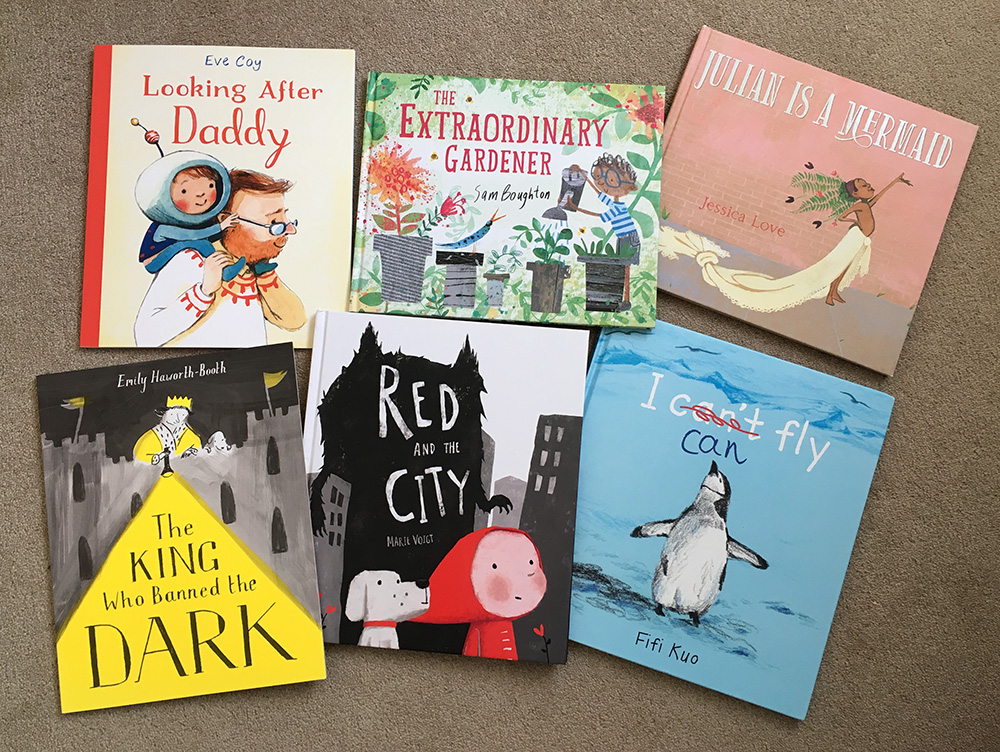 The shortlisted books have very different subjects: a penguin and a king; a mermaid and a beginner gardener; Little Red Riding Hood and a girl looking after her daddy. Recurring themes however are the power of a child’s imagination and the importance of family and love, while there are also subtly delivered, positive messages about the right to self-expression and about contemporary society. The six books are:

Looking After Daddy, Eve Coy (Andersen Press)
Editor Libby Hamilton, designer Rebecca Garrill
What the judges said: the images tell their own stories; really good interplay between text and illustration; I smiled all the way through

The King Who Banned the Dark, Emily Haworth-Booth (Pavilion Children’s Books)
Editor Neil Dunnicliffe, designer Lee-May Lim
What the judges said: a great idea and it really makes the most of light and dark; there’s lots of variety in the use of page layout, and lots of surprises; it’s full of energy and humour

I Can’t Can Fly, Fifi Kuo, editor Leilani Sparrow (Boxer Books)
Designer David Bennett
What the judges said: a beautiful book; a lovely sense of movement; the story has been done before but she’s transformed it; fantastic drawing skills, every penguin is different

Julian is a Mermaid, Jessica Love (Walker Books)
Editor Tanya Rosie, art director Deirdre McDermott
What the judges said: it reminded me of Sendak, it’s hard to believe it’s a debut; the illustrations say things that words would struggle to express; delivers an important message without feeling didactic

Red and the City, Marie Voigt (Oxford)
Editor Peter Marley, designer Kate Adams
What the judges said: the characters are simply drawn but have real personality; there’s a European feel to the artwork; a clever, multi-layered retelling of a well-known story 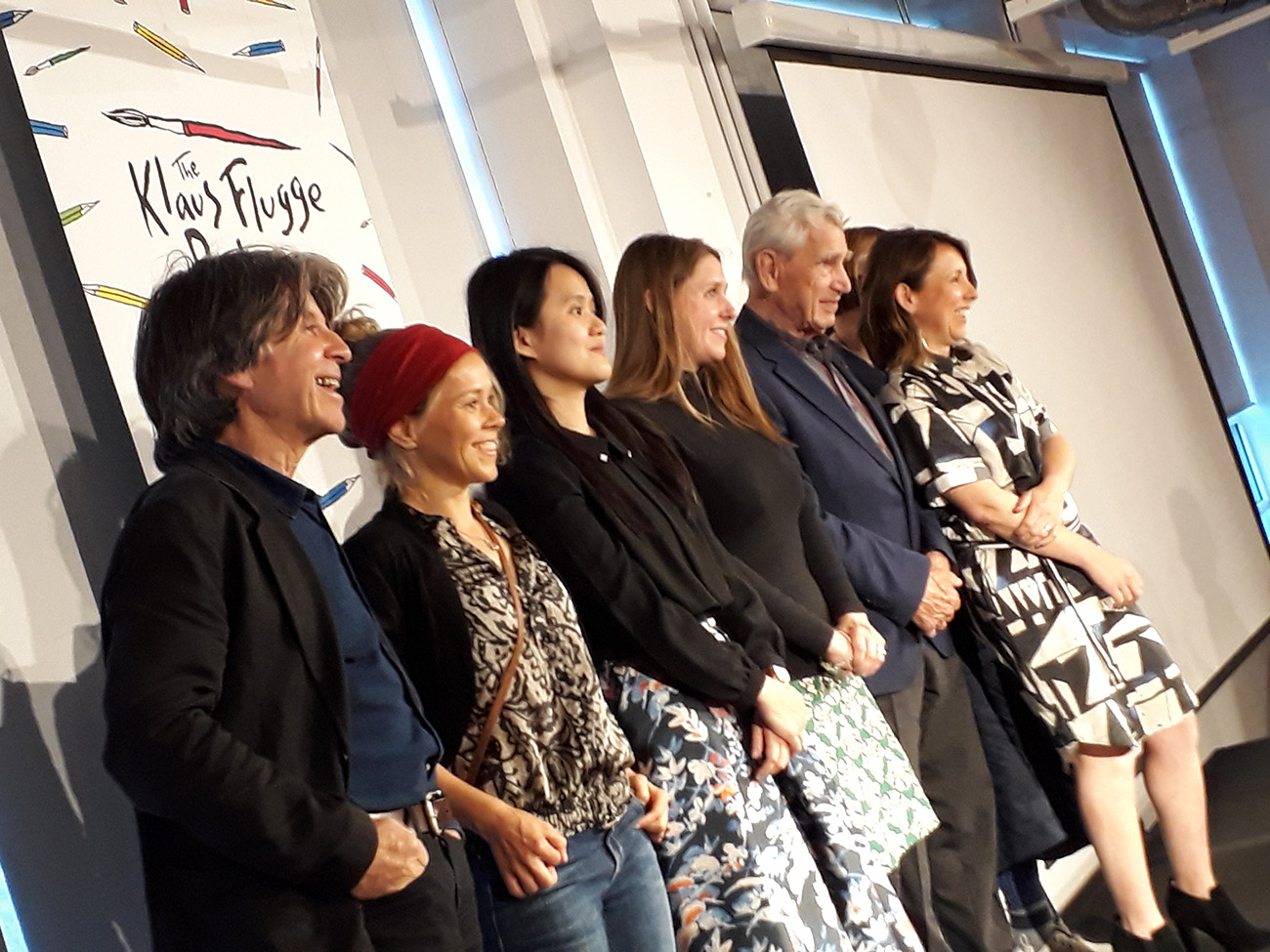 The shortlist with Anthony Browne (right) and Klaus Flugge

Sam Boughton and Eve Coy both take familiar domestic settings to explore, via very different art styles, children’s sense of home and family, as well as their ability to take control and change things. A beautifully drawn penguin family allows Fifi Kuo to describe the joy children find in discovering their abilities and new things about the world. Julian is able to declare himself a mermaid in Jessica Love’s book, which explores themes of freedom but also sexuality rarely covered in picture books. (It is also shortlisted for the CILIP Kate Greenaway Medal).Two very different cities provide the backdrops for Marie Voigt and Emily Haworth-Booth’s books, and both prompt children to consider our society and the forces that shape it.

Chair of the judges Julia Eccleshare said: “Our 2019 shortlist is very exciting and represents the range of talent and skill in today’s new picture book illustrators. It also perfectly demonstrates how much picture books give children – reassurance, knowledge and understanding of themselves and the word as well as that first appreciation of art and realisation that images can tell us more than words. We are pleased too that the list is once again international, with illustrators from Germany, Taiwan and the US represented alongside British talent. It’s a list worthy of Klaus Flugge who has always nurtured new talent and understands the power of picture books to open up the world for children.”

The winner will be revealed at an award ceremony in London on Wednesday 11th September 2019 and will receive a cheque for £5,000.

About the Klaus Flugge Prize

It was founded in 2016 and recognises a published picture book by a debut illustrator; the winning illustrator receives a cheque for £5,000.

The Klaus Flugge Prize is funded by Klaus Flugge and run independently of Andersen Press. It is administered by Julia Eccleshare, children’s director of the Hay Festival and head of Public Lending Right policy and advocacy and Andrea Reece, reviews editor at Lovereading4kids, managing editor of Books for Keeps, and children’s director of the FT Weekend Oxford Literary Festival.

Sam Boughton graduated with a BA in Illustration from Bristol UWE before studying at the Cambridge School of Art where she was awarded a distinction in the MA in Illustration. Shortly after that she won the Ronald Searle Award for Creativity and was Highly Commended for the Macmillan Prize.

Eve Coy studied at Edinburgh University and became an artist working for Aardman Animation.  She gained in MA in children’s illustration at the Cambridge School of Art.

Emily Haworth-Booth teaches at the Royal Drawing School in London.  Alongside her picture books, Emily is currently working on a long-form graphic memoir for adults.  Her short comics have previously appeared in print in the Observer and Vogue.

Fifi Kuo trained at the Cambridge School of Art and is Taiwanese. Since graduation she has won Bronze in the Macmillan Prize, been shortlisted for the AOI World Illustration Award and won merit in the iJungle Illustration Awards. She is keen for her picture books to convey a meaningful message.

Jessica Love is an author-illustrator and a New York based actor.  She has a BA in studio art from the University of California as well as a graduate degree from The Juilliard School for performing arts. Julian is a Mermaid is shortlisted for the CILIP Kate Greenaway Medal.

Born in former East Berlin, Marie Voigt holds degrees in Media Technology and Marketing and had a successful career in TV, branding and graphic design before realising that making picture books allows her to combine all her passions. 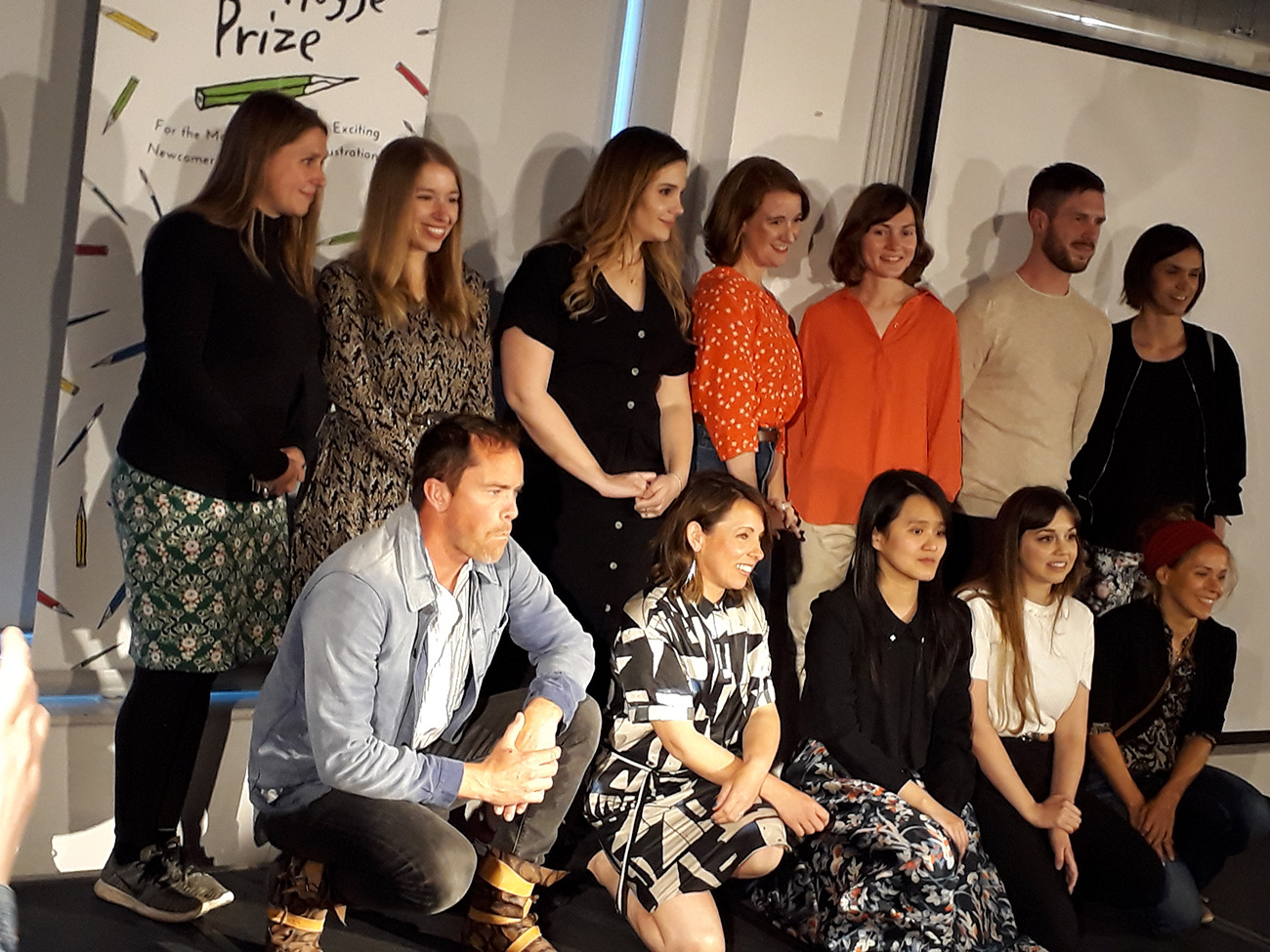 The longlist illustrators who attended the event

Anthony Browne is an internationally acclaimed author and illustrator with over forty titles to his name including Gorilla and Willy the Wimp. He was born in Yorkshire and studied graphic arts at Leeds Art College, working as a medical illustrator and an illustrator of greetings cards before his first book was published in 1976. He has many important awards including the CILIP Kate Greenaway Medal and the Hans Christian Andersen Award.

Anthony was the Children’s Laureate 2009-2011 and used his time in the post to raise the profile of picture books and picture book illustration, as well as the value of supporting children’s creativity and imagination.

Derek Brazell is a writer, illustrator, and AOI Project Manager and has been involved in the illustration world for many years. His books with co-author Jo Davies examining illustration are Becoming a Successful Illustrator, Understanding Illustration, and Making Great Illustration.

Derek regularly reviews children’s books, and has spoken on illustration matters at the Bologna Children’s Book Fair for many years. At the UK’s Association of Illustrators he is publisher of Varoom magazine, offers contract and licensing advice to members, and lectures on illustration business for universities, closely supporting illustrators in all areas of their careers.

Billiejo Carlisle has been a bookseller for 20 years.  She began her career at Ottakars working in Sunderland and Hexham and was part of the team behind the first Ottakar’s book prize. She joined Seven Stories in 2005 and as bookshop manager continues to share her passion for children’s books.

Kate Milner studied Illustration at Central St Martin’s before completing the MA in Children’s Book Illustration at Anglia Ruskin University. Her work has been published in magazines and her illustrations and prints have been shown in London galleries and national touring exhibitions. Kate won the V&A Student Illustration Award in 2016 and in 2018 was named winner of the Klaus Flugge Prize for her book My Name is Not Refugee.

Farrah Serroukh is CLPE Learning Programme Leader. An experienced teacher and senior leader, Farrah has always been a passionate advocate of every child’s right to access high quality literature and experience the best education possible. She coordinates CLPE’s partnership and regional work and is the author of CLPE’s Reflecting Realities Survey of Ethnic Representation within UK Children’s Literature 2017, which is the first of its kind in the history of UK children’s publishing.