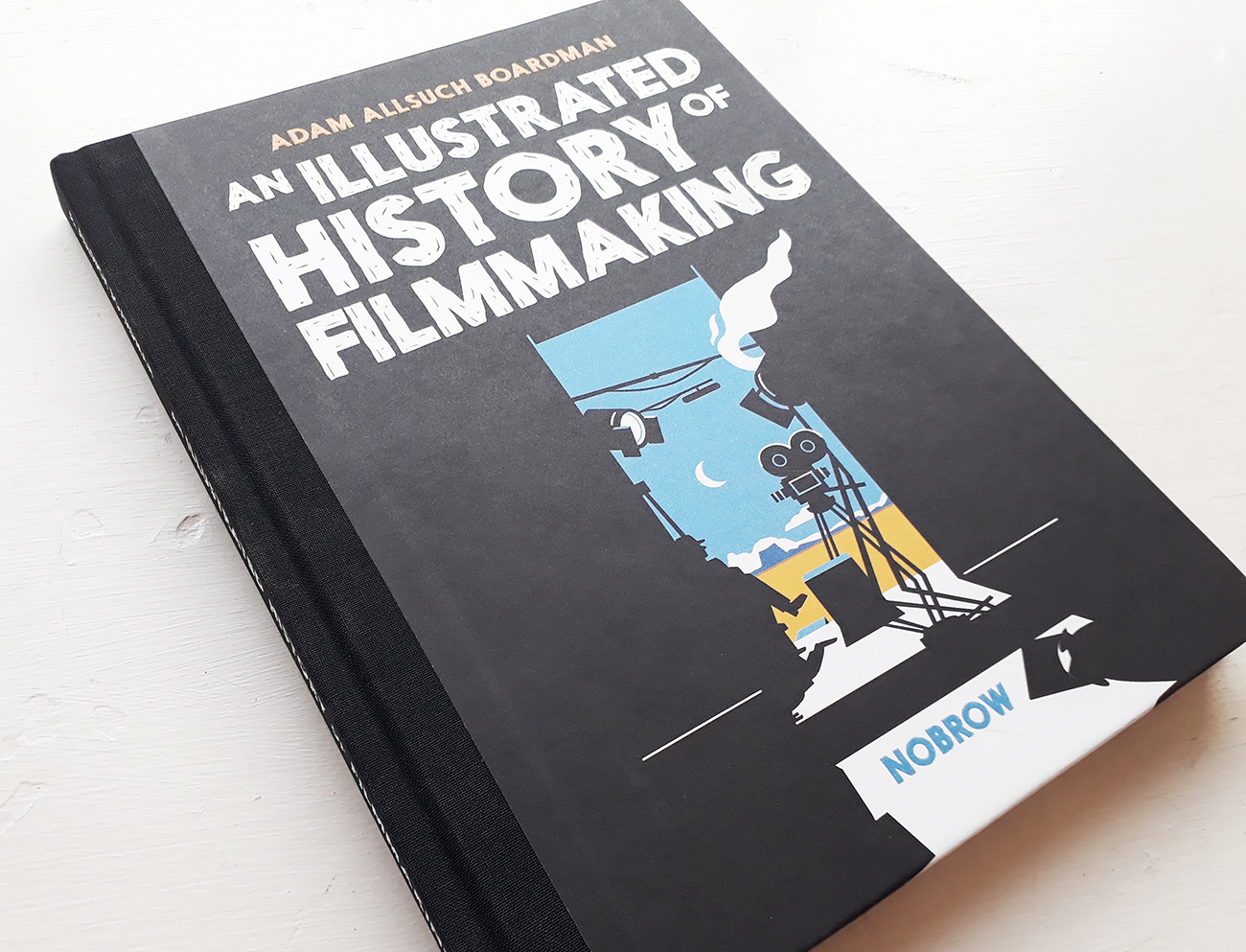 If you want to know how film came into being and the medium’s significant legacy, then this book is the right one to take you from the ancient art of shadow puppets to the CGI that dominates our modern blockbusters; from the illusions of Georges Méliés to the VR headset taking in all points in between. With great clarity in his use of written and visual language, Adam Allsuch Boardman applies the ultra-cool graphic stylings we expect from publisher Nobrow Ltd.

The cover, with its linoleum print textures, referencing the films of John Ford acts as the curtain raiser for a journey that begins with magic and chemistry and ends with the democratisation of movie production. End papers show the pioneer creators and performers who made their mark on the world through this art form. These include the Lumière brothers, scientists who made great strides in the technical production of film but didn’t see its potential, and Georges Méliés, an illusionist who use special effects and sets to transport the viewer to the far side of the moon. Thomas Edison was able to find ways to extend the environments suitable for film production through his many inventions. 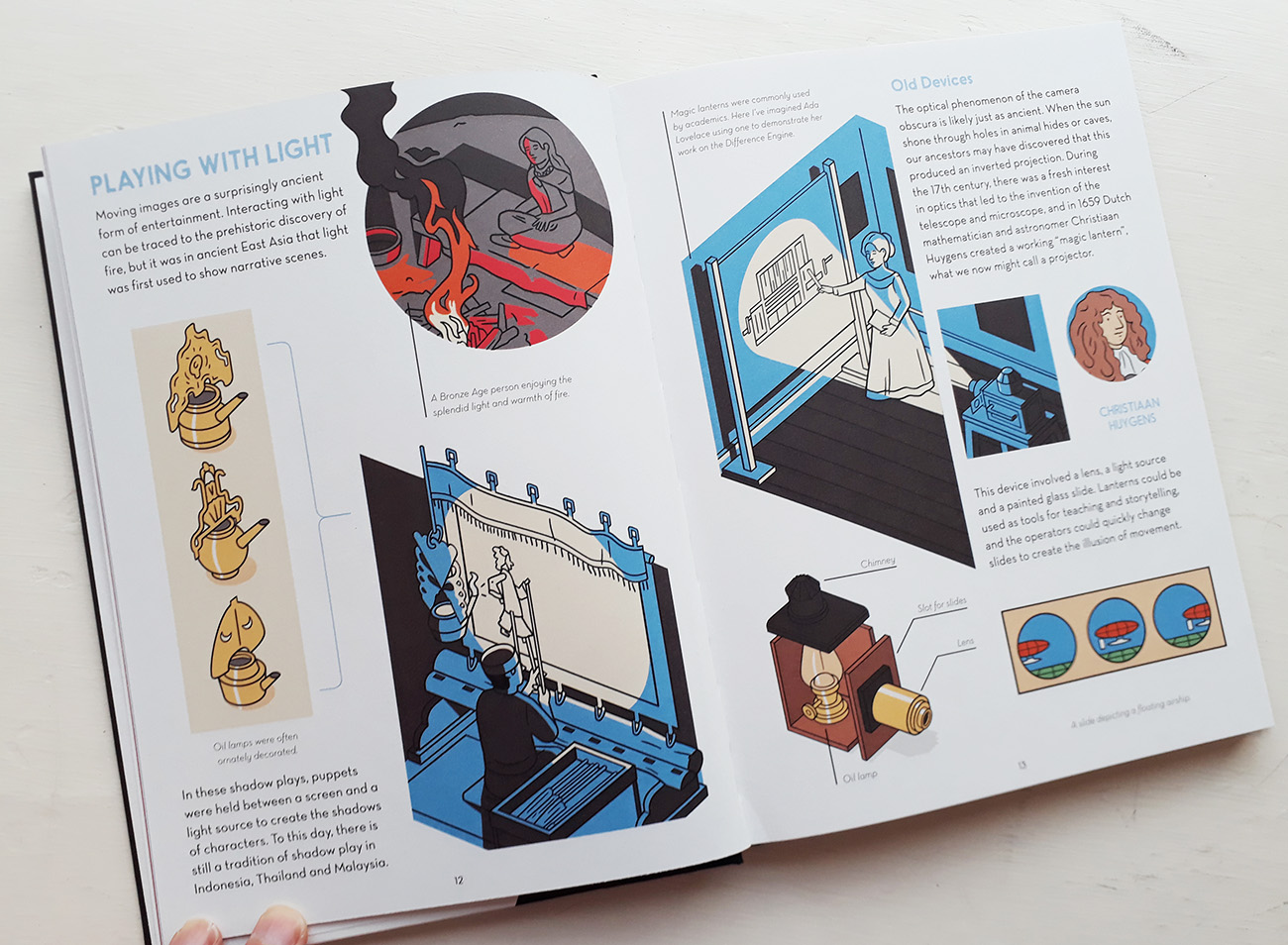 We are shown the venues for exhibition as they evolved overtime. The show, the spectacle that at first was expressed as a novelty transformed many areas of the world into production houses. These would go on to control distribution and exhibition in this factory system for the creative process. The inclusion of the Leeds Park cinema in Leeds delighted me, as this used to be my local picture house. It opened in 1914 and showed footage taken on the battle fields of WWI. When I was a customer many years later I only had to contend with Betty Blue and Blue Velvet! 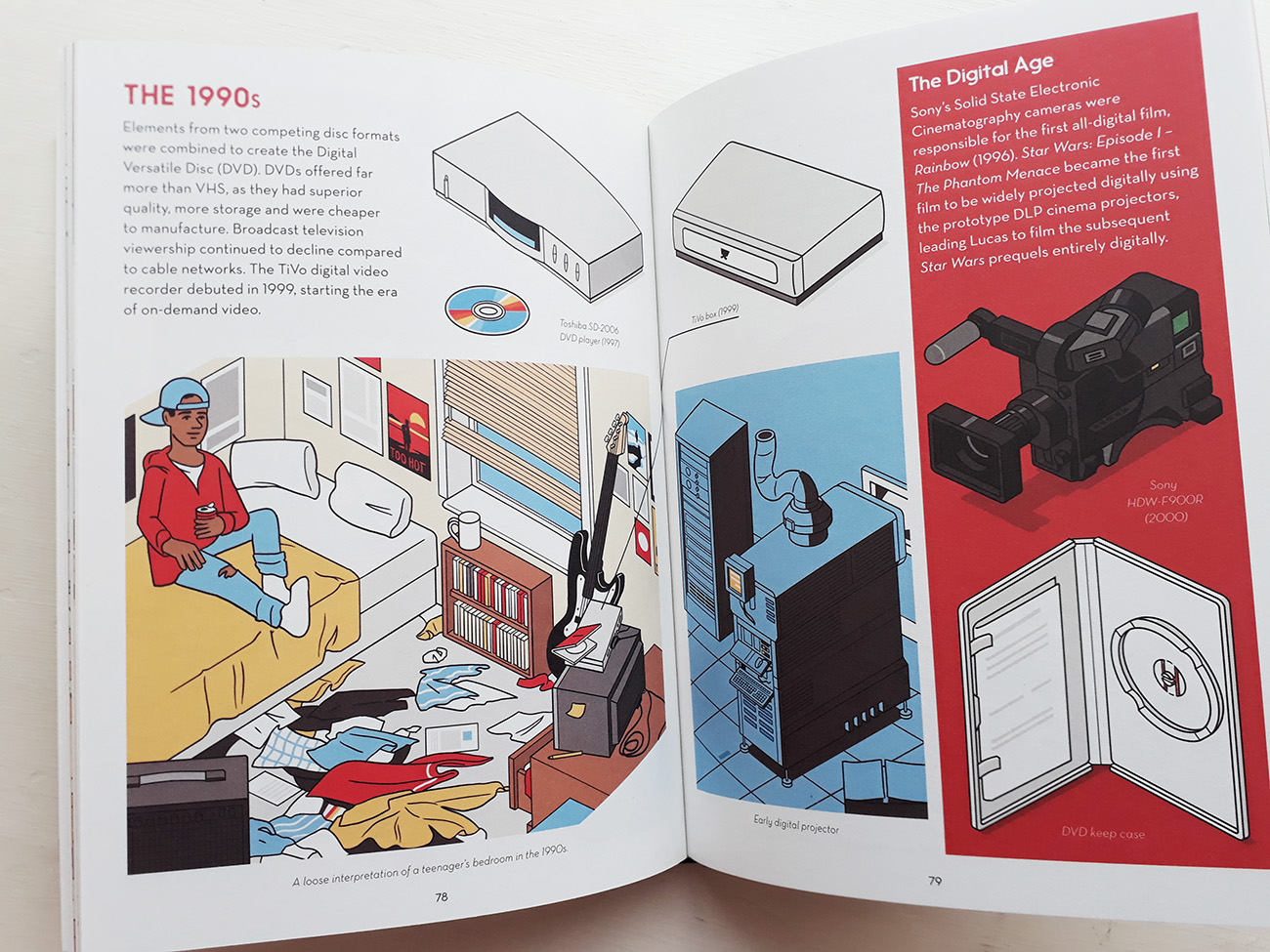 Though the content does not offer criticism on a par with Edward Ross’ Filmish, it still has plenty of charm. The drawings have more energy than you get from the more mechanical images found in a Dorling Kindersley guide book. Allsuch Boardman has been able to include references to equipment, set design and maverick Directors. His comprehensive understanding of the timeline and the meticulous detail employed to capture the equipment used by filmmakers is where he gets most pleasure. Perhaps the faces of the main protagonists of this narrative could be more lifelike. 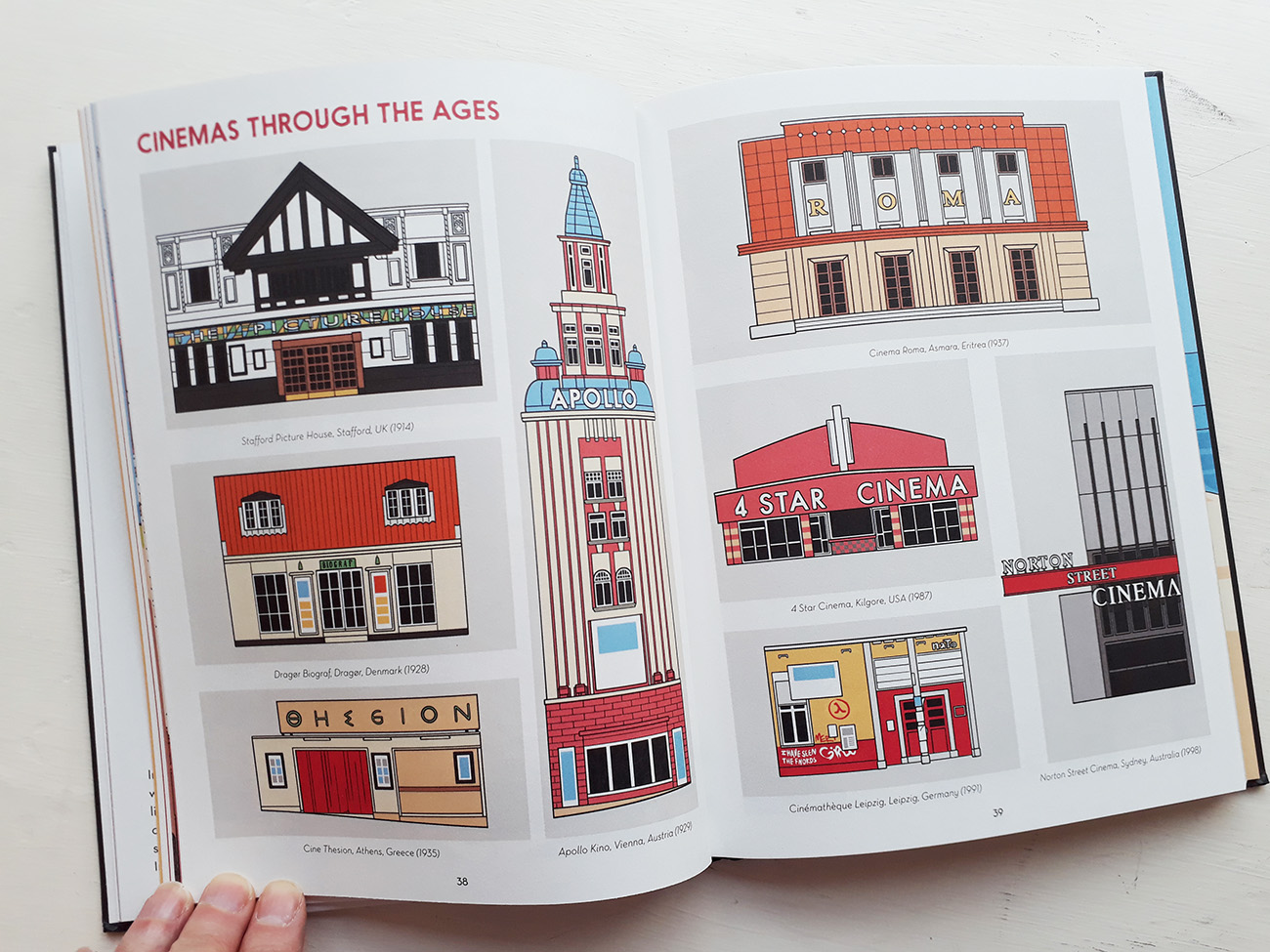 There is nice reference for Star Trek fans when The Team is introduced in the final pages. There is also a Glossary and References section to help the reader to add to their knowledge. Allsuch Boardman has achieved a perfect blend of facts, history and personal appreciation while still maintaining a convincing narrative. As an entry level guide this sensitively crafted product will appeal to Cinephiles and Cineaste alike. 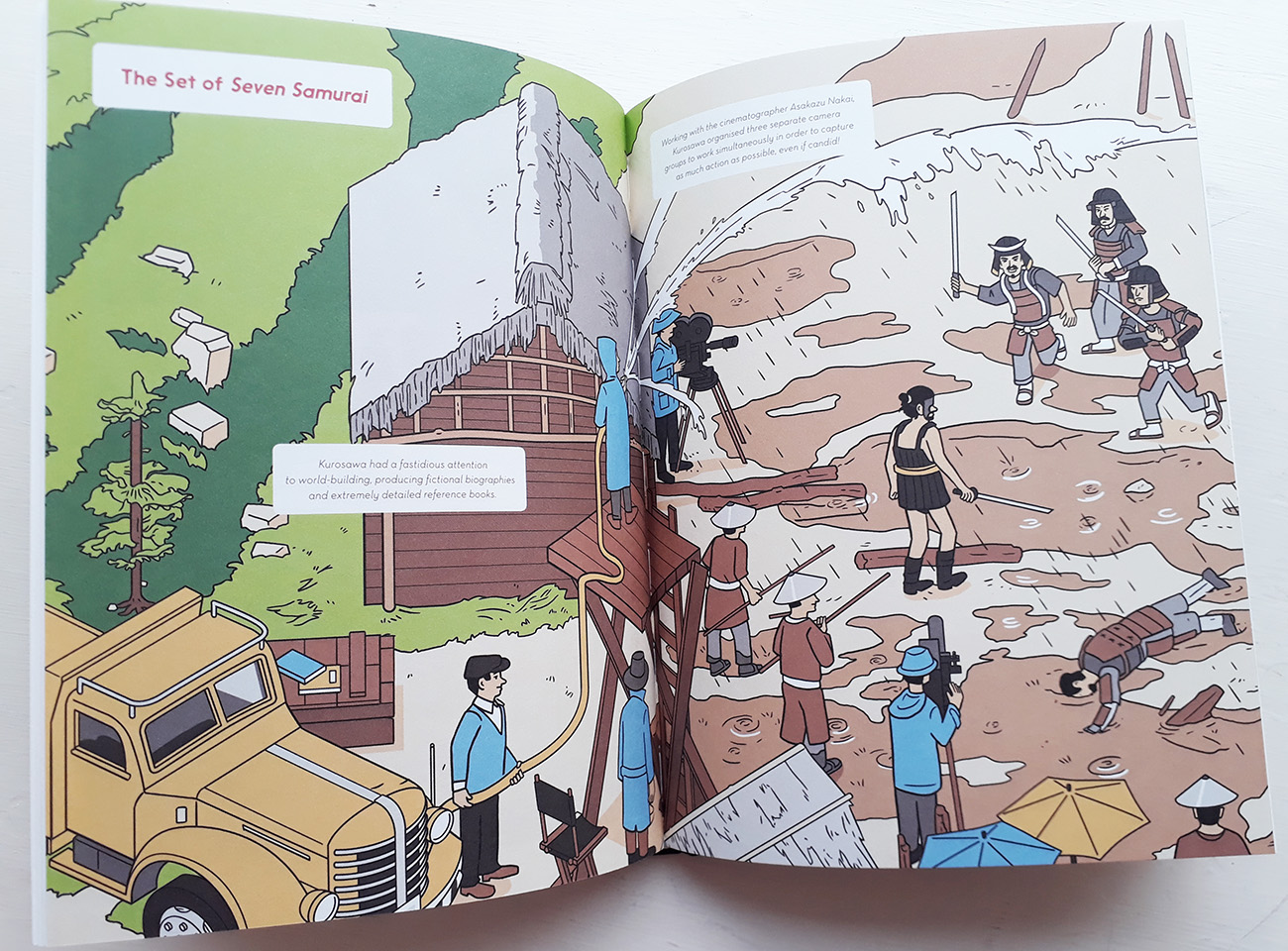