Carol won the WIA2018 Professional Research Category earlier this year. Here she tells us about her project ‘Thinking Room,’ an exhibition and graphic novel. 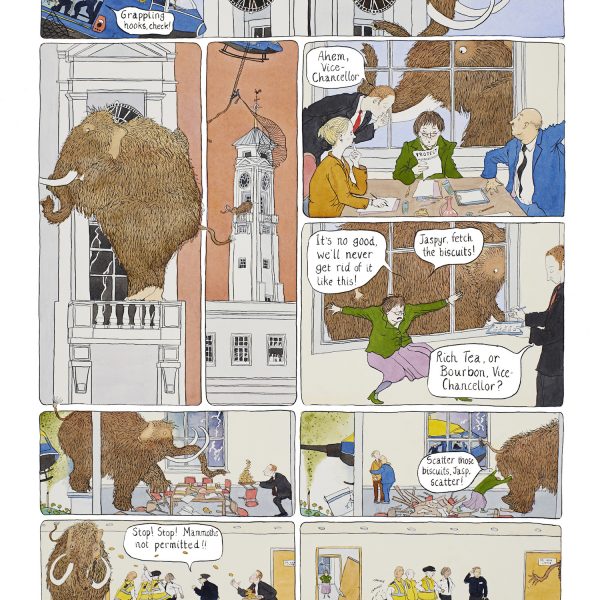 Thinking Room is both exhibition and book, commissioned by the Museum of Archaeology at Nottingham Lakeside Arts where I was Artist-in-Residence between 2016-2017. Thinking Room tells the story of the museum’s holdings in two ways: as fantastic narrative, and as a series of observational paintings. The first part takes the form of 10 outsize paintings. These form a fantasy narrative sequence about a malfunctioning Palimpsest Machine, and depict many artefacts held by the Museum (for instance, a mammoth clinging to a local landmark references a mammoth’s tooth). The second part consists of c. 30 smaller reference paintings that serve as visual footnotes. Both sets of paintings were made into an accompanying book, in which Part One -‘Story’- consists of the outsize paintings, and Part Two – ‘Artefact’ – consists of the reference paintings.

The project was an experiment in pushing the boundaries of the small-scale graphic novel format, and in showing the graphic novel’s storytelling properties in a fine art and museum context.

I set the brief myself.

I researched the museum’s deep and rich connections with the region and the University (where it is located), as well as the history of specific artefacts. I spent several months drawing in the Museum collections as well as in the collections in the Department of Archaeology and the School of Life Sciences, University of Nottingham. I researched the history of the campus and its surroundings, learning, for instance, about the various archeological digs in the area – the medieval village of Keighton, the Roman fort of Margidunum), as well as about more recent history (e.g. the museum is on the site of the former City Lido). I was also fortunate enough to be shown the albums of pen and ink reference drawings made by the museum’s founder, Felix Oswald, in the 1920s, which are not on public display. As with the other elements I discovered, Oswald’s drawings (often of chimeras) form a key part of the narrative of Thinking Room. 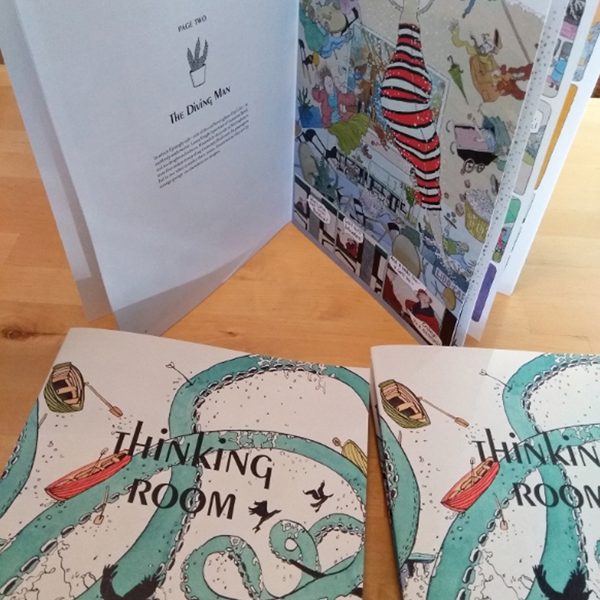 I planned the story first before inking, going through a process of detailed storyboarding. After that I created pencil roughs at about A2 size, which I then projected onto the paper in order to lay down basic guides for inking and painting. I always envisaged a two-part structure in the book, so at the same time I undertook detailed reference painting and drawing.

My mother died a month after I began the residency. I was profoundly affected by her death, and for months afterwards was unable to draw more than a few lines at a time. Work was painfully slow, but it was also a welcome distraction from my grief, and the residency itself gave me a space in which to work and think, as well as wonderful ‘colleagues’ in the form of the staff at Nottingham Lakeside Arts and the Museum of Archaeology.

On a more practical note, the scale of the paintings meant that the painting process was technically (and physically) demanding. It took me a long time to find paper that would take watercolour on such a scale without cockling, and the size of the paper meant that it was difficult to apply the paint to the page. I tried a number of different approaches, from standing the paper on an easel, working against a wall or on the floor. In the end I placed the paper on large boards tilted against tables, in order to apply the watercolour washes – this wasn’t good for my back!

A blindingly obvious insight that nevertheless took me too long to realise: that you can’t do large drawings with small tools.

I had various other commissions at the time, as well teaching commitments at Nottingham Trent University, the House of Illustration, and the National Archives, among others. I also ran a series of workshops related to the project at Nottingham Lakeside Arts.

The more I researched the more multi-layered the project became. I had originally intended it to consist of a series of big drawings, instead of which I ended up doing a sequence of small drawings on a large-scale. Next time – bigger brushes!

Creating something from nothing is a high wire act. Take heart from those who’ve done it before you. Hold your nerve – and what that means in reality is just carrying on, day in and day out. Draw what interests you and don’t worry about what other people are doing. Draw, draw, draw, and when you don’t have a pencil in your hand, think about drawing what you see anyway.

I would like to offer my heartfelt thanks to Dr Clare Pickersgill, Keeper of the Museum of Archaeology at Nottingham Lakeside Arts, to the Collections Team Diane Wren and Mark Laurie, and to Jonathan Casciani, Ambre Morin-Pauletto, and Oliver Wood of Joff & Ollie Studio, who designed the book.

Carol Adlam is an author-illustrator specializing in book illustration (graphic novels, children’s books, and reportage), and has published five graphic novel projects (Thinking Room, 2017; Ministry of Women, 2016; Amy in Love, 2015; Suzanne’s Story, 2014, and The New Wipers Times, 2014). Research and knowledge communication are central to her practice. She has held residencies at a number of museums and galleries, and clients include the National Army Museum, the National Archives, Nottingham Castle Museums and Galleries, the University of Derby, Nottingham Lakeside Arts (Museum of Archaeology), and the United Nations. She is Senior Lecturer in Illustration at Nottingham Trent University, and teaches at the House of Illustration.