You may be aware that there is no copyright in an idea, only in the form the idea takes. If you have a brilliant idea for an illustration and someone copies your idea but renders it in their own distinctive way, they will not be infringing your copyright. However, if they copy a substantial part of your actual image, they will be infringing.

Neither is there any copyright in style, a fact that seems particularly unfair to the many illustrators whose ‘style’ is very personal and an important selling point. However, there it is. The only consolation is that illustrators who copy someone else’s style are generally frowned on by their colleagues and seldom thrive

Copyright will not help with similarities that happen by chance. An image could be produced that looks just like one of yours, but if the person who created it had never seen yours and hadn’t copied it, there is no infringement.

In October last year Chinese Art Professor, Fan Yu submitted work for the international competition: Red Dot Design Award, entering two poster series “Open Air Cinema National Museum” and “Brain Air Museum” both were awarded prizes, with one being the overall winner. However, he won credit as a result of infringing the copyright of existing illustrations.

Yu had apparently copied elements of Cobb’s images very closely and added additional elements (below). The infringed artworks were created in 2011 by Illustrator, cover artist of The Illustrator’s Guide to Law and former AOI chairman Russell Cobb. 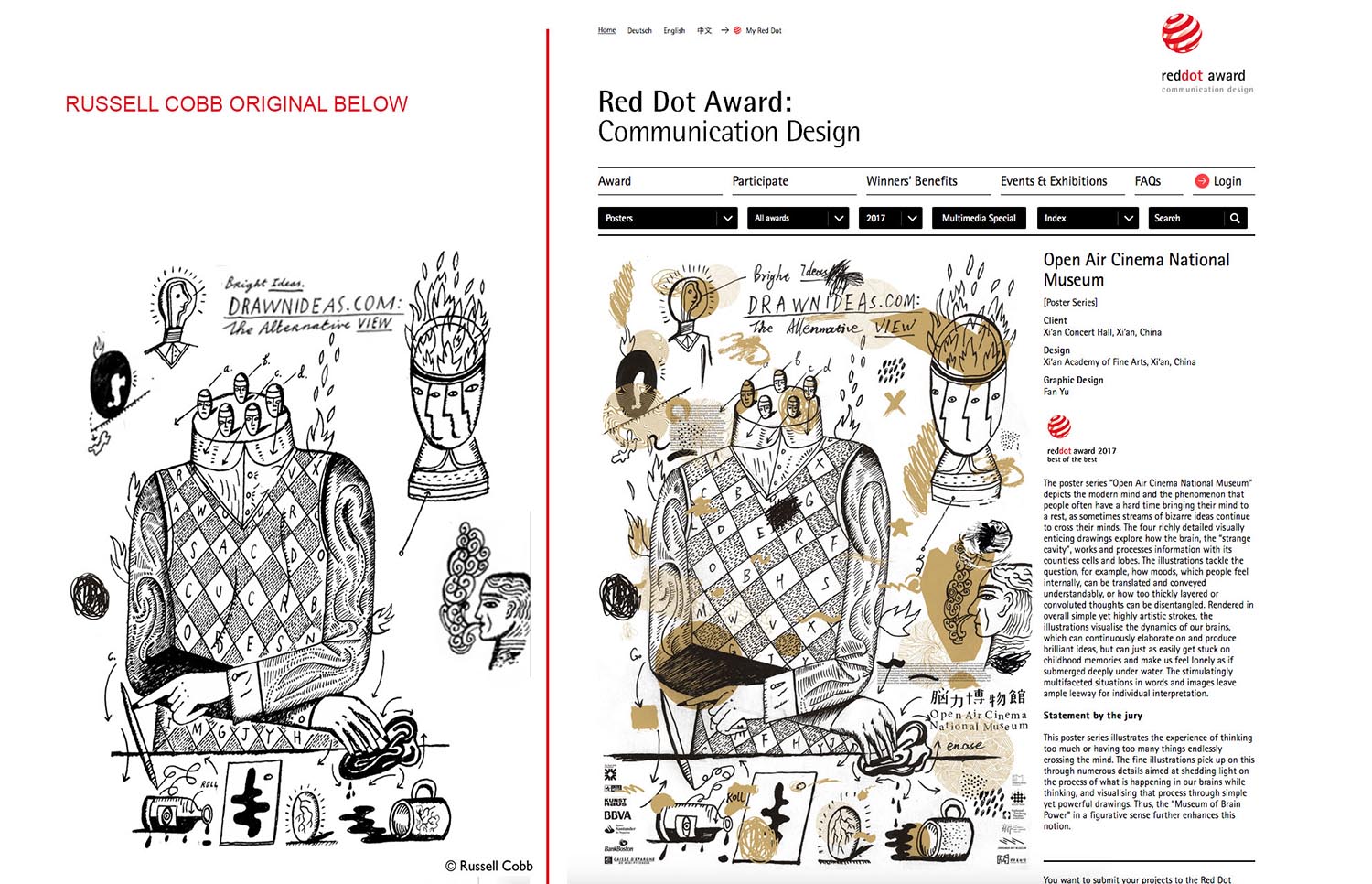 The infringement was confirmed in April and acknowledged by The Xian Academy of Fine Arts where the tutor and artist then worked, after discovery on an online social platform We Chat group called Chaoxiart (We-Media art plagiarism). 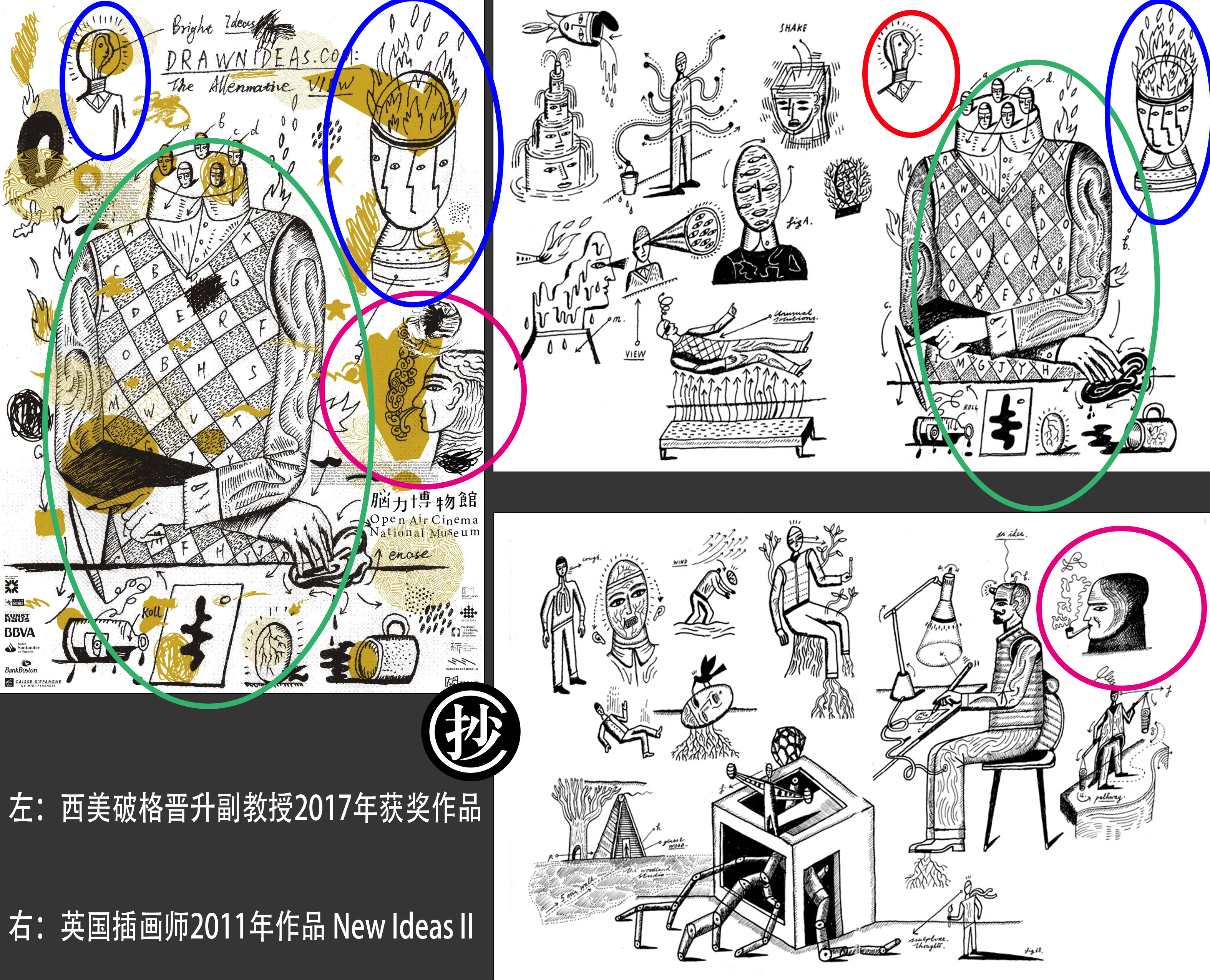 The implications of the infringement were significant. Not only did the infringer win a trophy, certificate and cash prize for the awards but he also gained a promotion at the University to Associate Professor.

Russel Cobb: It was the strangest affair seeing this happy individual collecting his large cash prize in front of a huge back drop displaying my work. By all means it was a glitzy night, like the creative Oscars.

Once the infringement was revealed, in a desperate attempt to cover his tracks, I started to be bombarded with emails from China to ‘collaborate’ (work together on a project and invitations to teach in China), the emails became more desperate as time went by. I also received phone calls from Fan Yu’s friends in London, asking me to meet for a Chinese meal, to discuss the big mis-understanding. They began by being friendly, then they were more threatening. 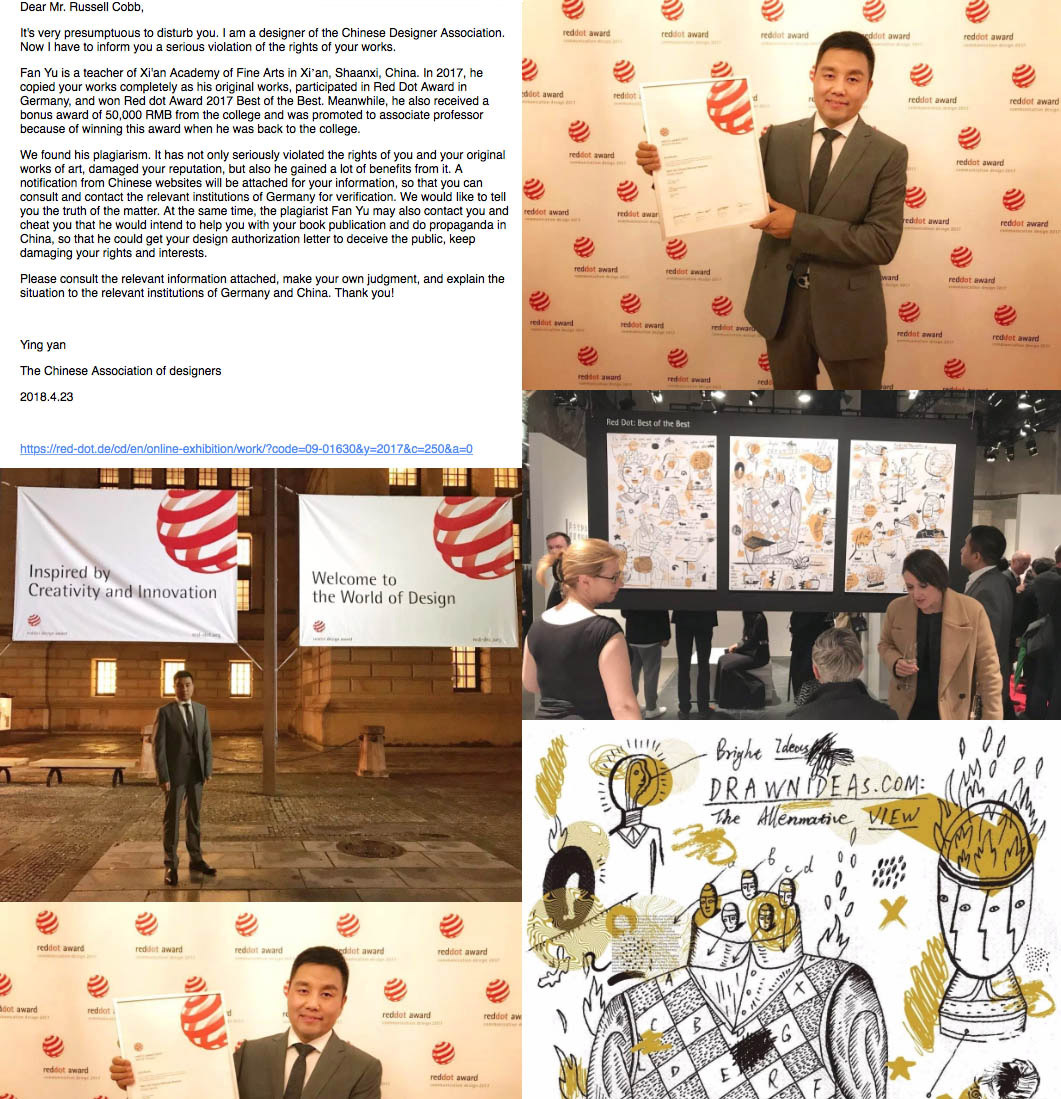 Case Study: Design Award Night. Fan Yu travelled from China to Germany to accept the accolade and collect the prize

Cobb asked Red Dot to cease and desist from promoting the fraudulent artist: Cautious at first, Red Dot did their due diligence and investigated the matter. They were hugely professional about the whole affair, they were deeply in shock, obviously fearing the consequences. I took a calm and measured approach. Eventually Red Dot removed the work, published a statement and apology to me. Consequently Fan Yu exposed in international press, was banned for life from the awards and lost his position at university. 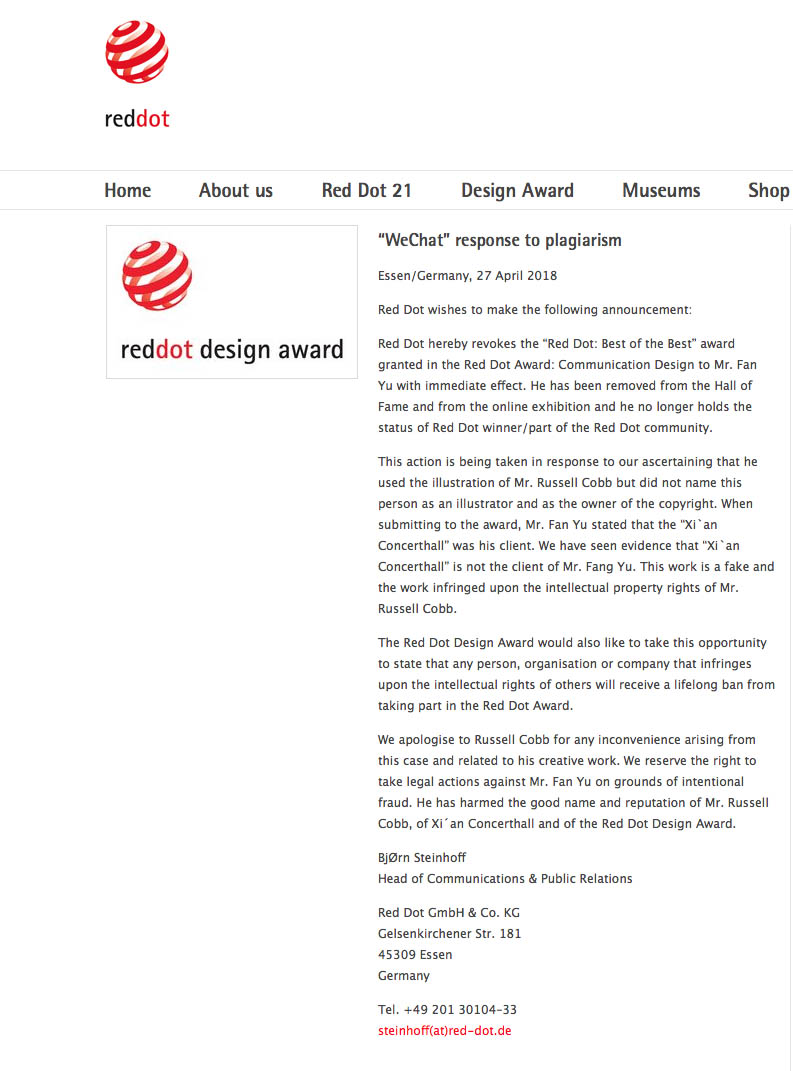 We asked what were Cobb’s final thoughts on the matter:

I feel Resolution. It’s sad I never received the accolade or the cash, of course I feel cheated. I feel indifferent about Fan Yu, I have never corresponded with him, never met him and I never want too. One day he might realise the error of his ways.

Red Dot dealt with the matter swiftly and I received a public apology. However, I never received any recompense. The expensive glossy Awards year book is out there, with my work in it, attributed to someone else.

As copyright in an image exists ‘in part’ or ‘in whole’, this is a very clear case of plagiarism and is a startling example of an artist not understanding the legalities or value of copyright. This is of paramount importance in countries like China where Illustrators are fighting hard to protect and improve their rights.

Wherever you live and work infringement is a challenge for illustrators. You can be vigilant as happened here – and flag up any concerns you have to the rights holder. The AOI has resources on how to deal with copyright infringement here. You can also protect yourself by ensuring that all your work is uploaded in low resolution at 72 dpi if it is online.

For lots more info on copyright and more see the Illustrator’s Guide to Law and Business Practice – written by an illustrator for illustrators. Illustrator’s Guide to Law and Business Practice describes in easy terms how the law affects the business of illustration, and how to avoid the worst pitfalls. As well as copyright, contract and agency law, it deals with business practice issues such as how to licence illustrations, client negotiating techniques, fees and what to expect from your agent. The author of the Guide is Simon Stern. 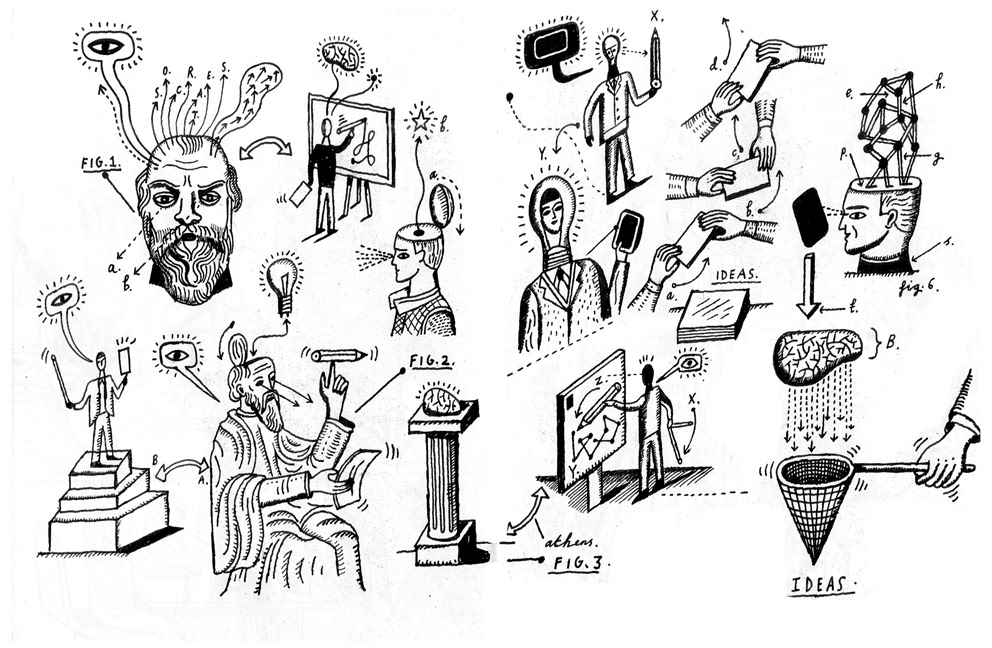