Based ‘Down Under’, AOI member Andrea Innocent lives and works as part of the Illustration scene in Melbourne. She describes her travelling years in Japan and how their art styles have influenced her own practice and led to finding satisfaction and grounding in teaching and leading workshops in Australia.

Andrea has been represented by Member Agency Jacky Winter for over 11 years, demonstrating a lengthy and united relationship. This year Andrea was further shortlisted in the World Illustration Awards for her piece titled ‘The Illustrator’ a representation of what it is like to be an Illustrator and parent.

She continues to explore how finding balance is important as a freelancer while lecturing at NMIT’s Bachelor of illustration in drawing and digital design, and has given many talks on subjects like professional practice, design education, marketing, character design, pricing and ideation. 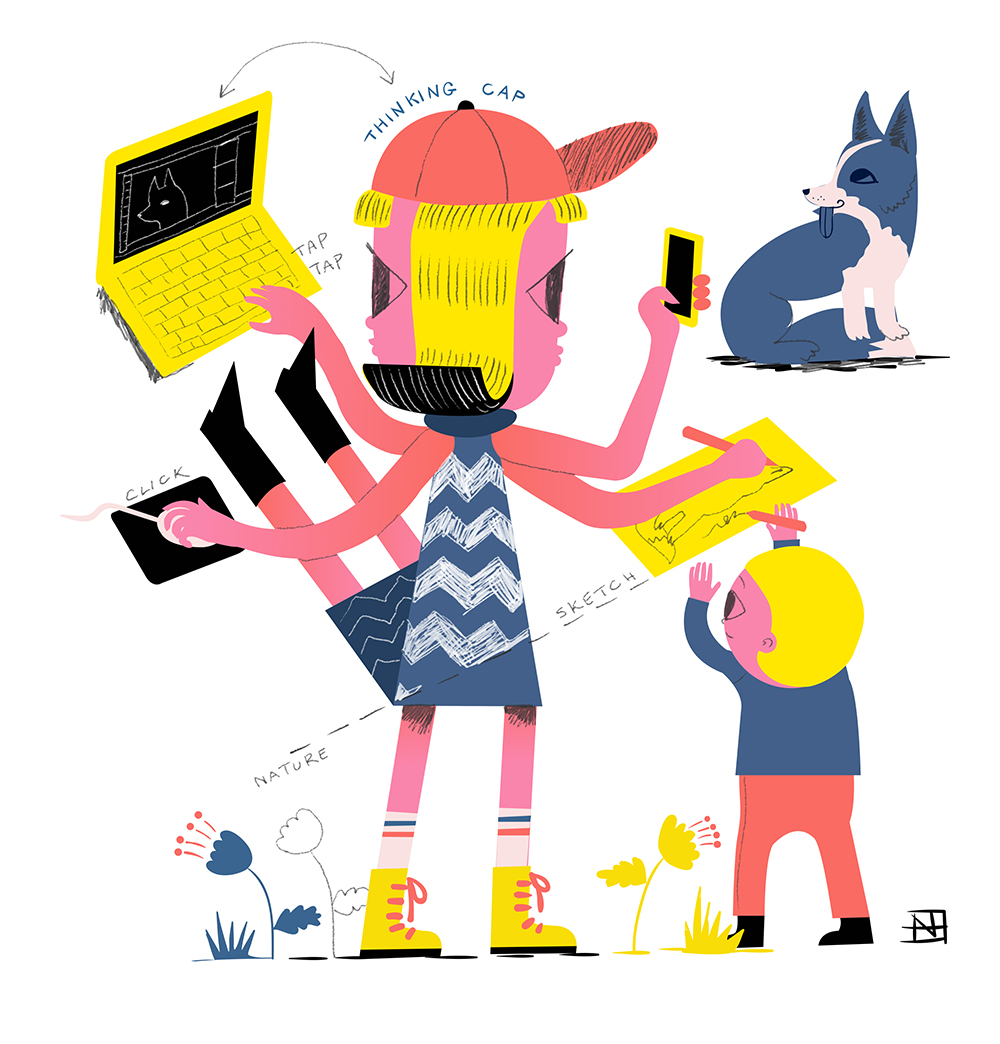 This year you were shortlisted for your image ‘The Illustrator’ shown above, in the Design category at WIA 2018. Can you describe the thought process behind this image? What aspects of motherhood inspire your illustration?

Prior to becoming a mother, I had spent many years working freelance, and my sole focus was my work. From the moment my son was born he became my entire focus. Every waking hour, and there were many of them, reflected his needs, and on top of that I fell deeply in love with him.

I worked briefly part-time when he was around five months old, undertaking a few publishing and small ad commissions which I could only complete while he napped in the day. I found him so fascinating, and it wasn’t until he grew to two-and-a-half years old that I was able to find more time to think about myself and my work.

One day in his second year I had the urge to draw for fun on a spare piece of paper, a tiny hand (belonging to my son) picked up a pencil and joined me in drawing on the paper. This became ‘the new normal’ I thought to myself. I wondering why I had avoided drawing previously while around him. What a gift for him to be able to see his mum draw. I spent that evening developing the drawing of myself and that sketch became ‘The Illustrator’. I was so elated to hear my image was shortlisted as it gave me much more confidence on my recent return to the creation of new work. I feel that although things are changing I do feel there are aspects and stories of motherhood that don’t get a lot of airplay and at times I feel the real challenge is being heard about your experience as a mother and a woman.

The creativity it takes to be a parent is what inspires my illustration now, there are endless negotiations and angling towards more fun and play in general, my son is especially into rhyming and word play and that has given me endless new ideas for images and characters. I also get to read lots and lots of excellent children’s books!

You talk fondly of a piece titled ‘Umeboshi Otaku’ commissioned by The Portland Mercury, which lead to a series of illustrations and exhibitions heavily influenced by Japanese Ukiyo-e woodblock prints. Can you explain the symbolism of this image, and how you feel this style translates in Australian culture?

My fondness for Umeboshi developed whilst living in Japan and became a talking point amongst my friends. Umeboshi are a sour plum and most definitely an acquired taste. I decided to create the image ‘Umeboshi Otaku’ (below) initially as an exploration of the concept of otaku (loosely translated to ‘devoted fan’) explained to me by a Japanese student at that time. Whilst also in Japan I was inspired by the colour and compositions in an exhibition of Kabuki woodblock portraits by Utamaro Kitagawa in Harajuku.

At that time Adobe Illustrator was relatively new and probably the best choice in terms of recreating a woodblock cut affect without actually cutting any wood. I uploaded the illustration to my blog and the free platform IllustrationMundo (set up by Nate Williams) to meet other illustrators and discover other illustration as well as hear other advice. I was living in Japan at the time and felt pretty isolated from the rest of the world, so I can honestly say it was one of the key factors on getting me started as an illustrator. 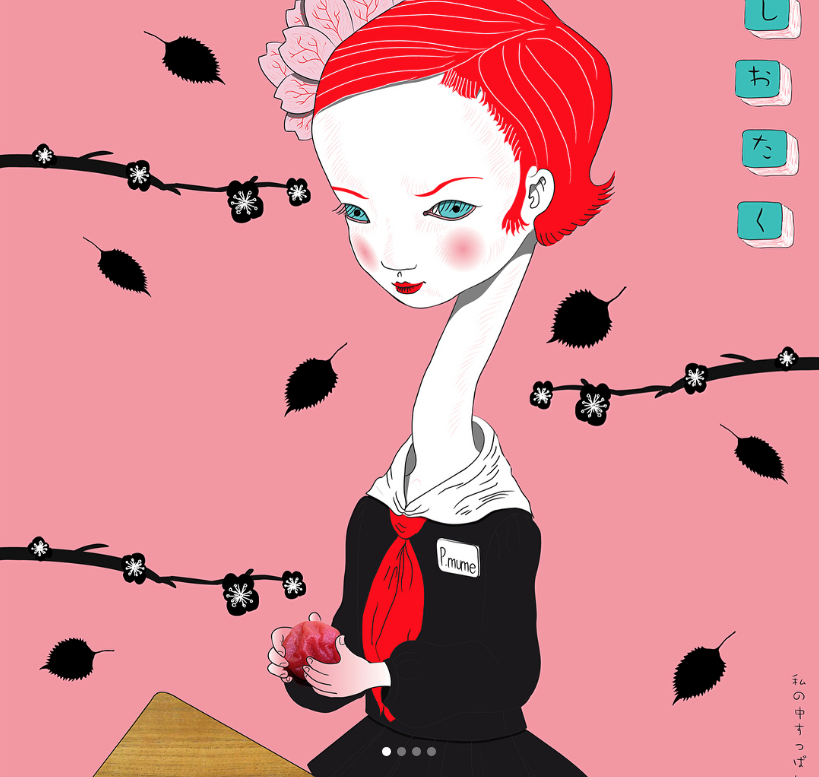 Through the site I received an email from The Portland Mercury magazine asking for use of the work on their front cover. This first email planted the idea into my mind that I could ‘become’ an illustrator!

It’s really interesting to think about people starting out now, they are really spoilt-for-choice with platforms. So much of your perceived popularity and success is driven by how many Instagram followers rather than by a community of peers in illustration, and with a love for it. Maybe the only comparison to Illustration Mundo now could be something like Behance. Actually, looking at it that way, it makes the AOI and the support the community provide all the more important these days!

We have seen your Illustration for animations on the Guardian UK. How did this commission come about?

This commission was sent to me via my agent, The Jacky Winter Group. The brief was to create three, one-minute animations that explain the history of the design of everyday objects such as the Post-It-Note or Velcro®. I supplied the keyframes to an in-house animator, the brief to be quirky and fun.

As a Guardian reader I had seen the The Guardian Labs now and then on the bottom of their main web page and noticed they had commissioned animators and illustrators to create content which was sponsored by brands, in this case the client was Skoda.

Jacky Winter uses Basecamp to run a project. Basecamp is where you can send any questions about the job, check deliverables, upload sketches and final art and it’s way less confusing than an email thread. Almost every time a commission comes up a Jacky Winter producer sets up a meeting first so I can meet the client and get the details and any questions sorted before we start and then Basecamp is set up and we go from there. I find it a great way to work as you can ask questions within Basecamp and add anyone who it is relevant without disturbing others.

The Guardian Labs job was my first serious big job since becoming a mother and taught me a lot about working efficiently and quickly, there has been a lot of letting go of feelings about the work and fussing around as time just doesn’t allow it anymore. It was also my favourite kind of job to work on as I create the assets which become animated as it’s really so exciting to see them come alive at the end.

Having drawings animated makes me feel like ‘Simon in the Land of Chalk drawings’, so magical.

What has your experience with The Jacky Winter Group been like? How do they support you?

I met Jeremy Wortsman (Director) in a cafe eleven years ago, after he reached out to me via email. Hearing him talk about his “hair-brained” idea of starting an illustration agency right here in Melbourne, Australia makes me believe that being in the right time and the right place can sometimes be everything. I had just started out so to have him ask to be a part of his new agency really gave me a lot of confidence and inspired me to work even harder. The jobs I receive via JW are easier to work on in so many ways; the pay is usually better, they are well art-directed and I’m protected by the JW producers who filter the information and watch over the process to allow for as much smooth sailing creation time as possible. Most importantly they are most likely going to be jobs that are in my wheelhouse as clients have picked me from a line-up of other artists for my style rather than just for my technical skills.

It’s plainly visible how you’re inspired by Japanese folktales. Can you elaborate on how you interpreted these stories for your exhibitions? (particularly Love, Thieves and Fear Make Ghosts: Old tales and new forms of Japanese ghosts)

Japan inspired lots of new directions for me, from the cultural differences to the attention to detail and love of meaning and symbology in everything – from a tea ceremony to a new character mascot for a company. One tradition I became most obsessed with was the telling of ghost stories. These stories are told in the height of summer in Japan as they say the feeling of goosebumps cool you down.

The works I created for ‘Love, thieves and fear make ghosts’ are re-interpreted versions of these folktales. I saw the ‘Nureonna’, a serpentine like creature with the head of a woman who lurks in waterways, as a message for climate change. The Kitsune, a shape shifting human/fox who marries an unsuspecting partner, as a Ginza girl seeking a wealthy boyfriend. The Futakuchi onna, a woman with a mouth in the back of her head and tendril like hair, as a story of the uncontrollable power of an eating disorder. All the stories were equal parts as fascinating as they were disturbing. What’s not to love?

You have been working on a character universe called Otoshimono Charactez. Is this a personal project, or do you plan to expand it into commercial work (an animation, a children’s book)?

Otoshimono Charactez is a world of interconnecting characters that originated as early as primary school with my first character at age nine, a bowtie wearing duck called ‘George’ with a giant head. I am constantly doodling new characters and love to find ways for them to ‘meet’ each other in this universe. One of my favourite interactions is between ‘Cyclops rabbit and well harsh rabbit’ they are a one-eyed rabbit and a carrot with legs and the to-and-fro questions and answers between them is heart-breaking and funny, basically they are an embodiment of my thought processes with myself.

I intend to create an interactive map of my world of Otoshimono Charactez and use another site to showcase it, most likely to go live sometime in 2019. ‘Otoshimono’ means lost and found in Japanese, I am a big believer that ideas are ‘seeking’ us, that they want to be found and we just need to be open to them, so the name fits for my odd collection of characters.

Richard Scarry books were my original inspiration for character design and I still love to spend hours with my head in their pages! 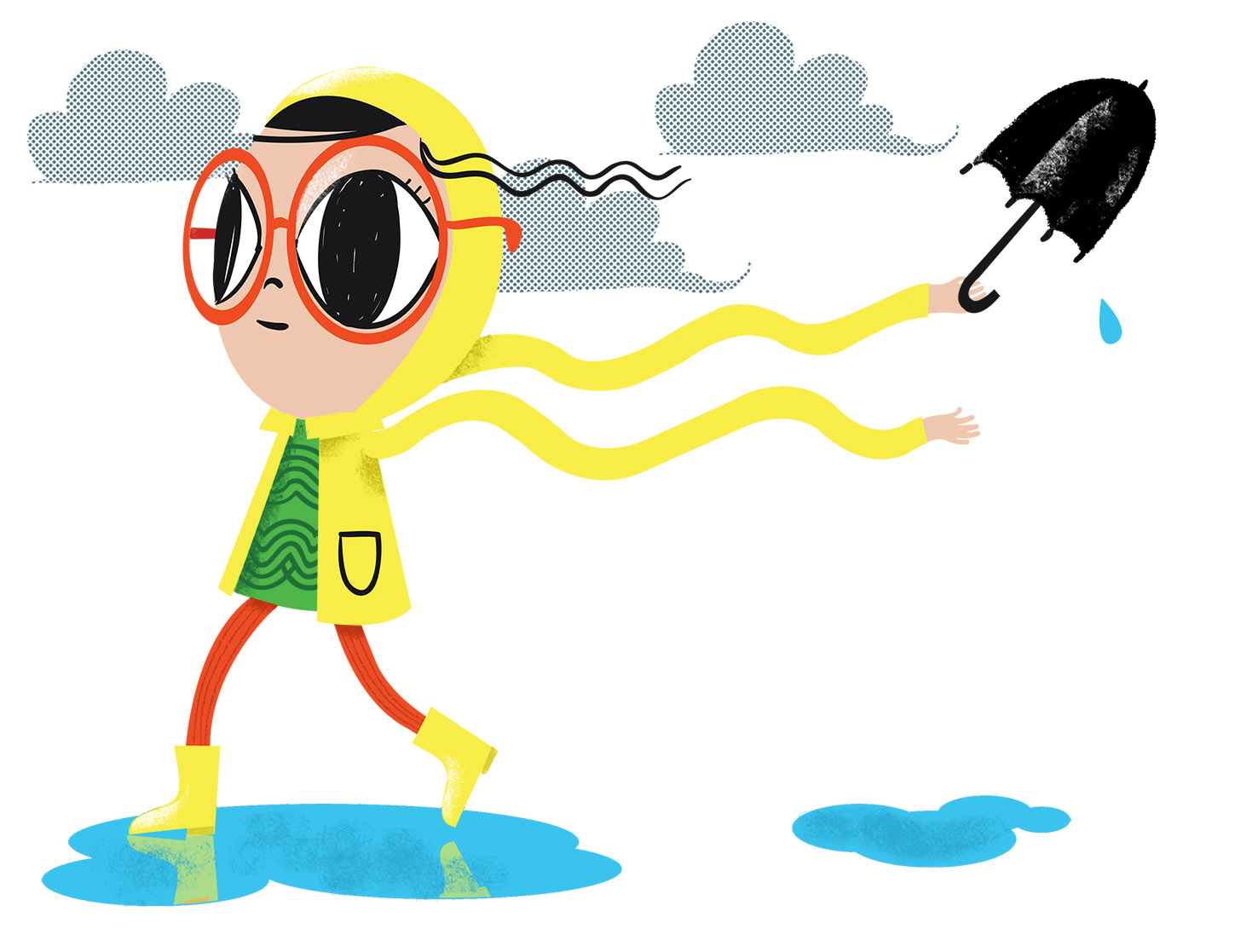 Aside from your illustration work you have also worked as a workshop facilitator and lecturer. Why do you think it is also important to teach and to talk about professional practice?

As a freelance illustrator I feel quite isolated at times and fall into habits with my work and process that may not be very efficient or even good for me creatively.

I can’t tell you the amount of times a student has asked me a question about why a certain process is used in illustration which then makes me question that process and see it in a new way. Teaching has allowed me to get a real perspective on my profession that even a regular job working in house hasn’t been able to give me. It holds you account for your actions as a professional, not to mention how incredibly inspiring it is to see the growth in a student’s technique as well as experiencing their eagerness to learn.

Final note: Controversially I didn’t study illustration, I studied Fashion Design and then did my Masters of Multimedia. 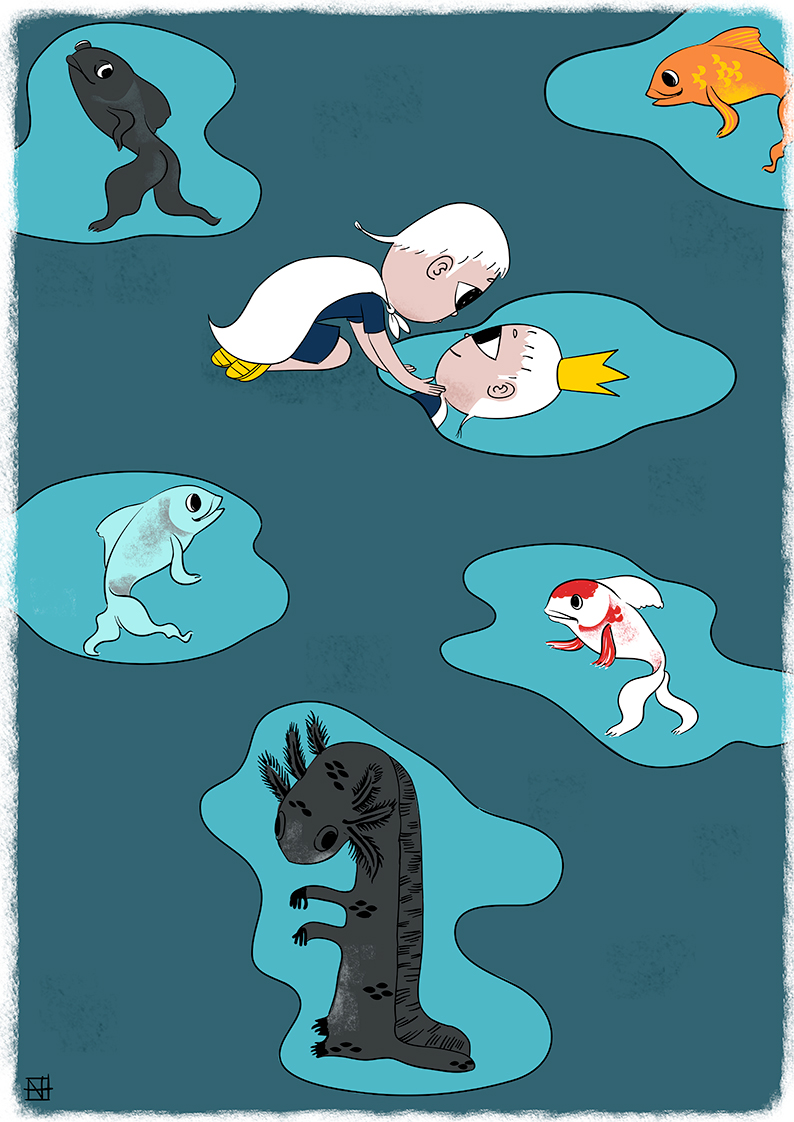