The new upcoming Varoom is looking at Activism through the prism of illustration. In advance of this we spoke to Illustration superstar, new father and AOI Patron, Oliver Jeffers, who has been increasingly ‘outwardly political’ since deciding that he should speak out – in image and text – on attitudes and events in the world. Using illustration has been a fundamental part of this: ‘I think art has always played a very important role in questioning politics, and representing a public conscience.’ 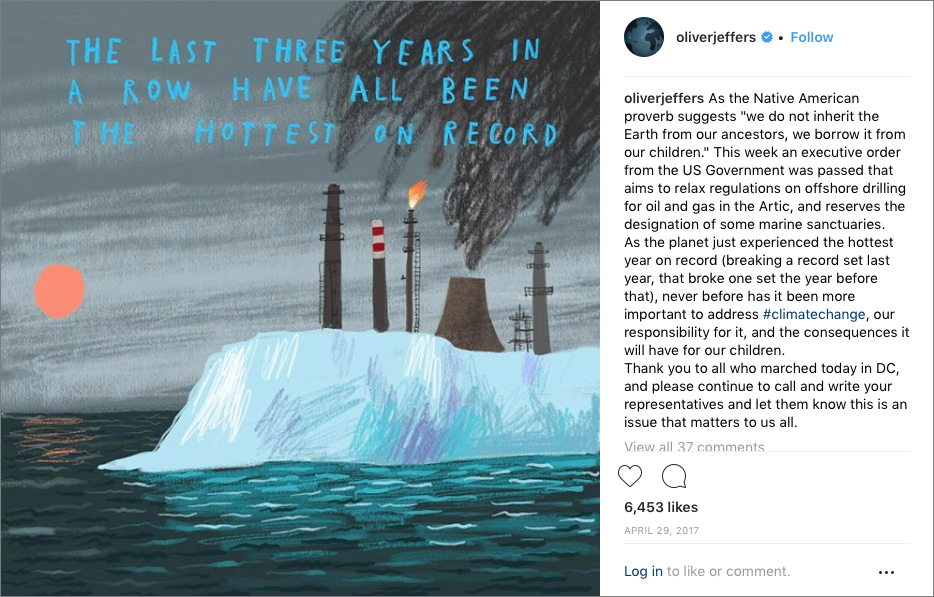 Oliver Jeffers: I have always felt the way I do about things, but never felt before it was my place to speak up publicly. I suppose the reason I have become more outwardly political is threefold. Firstly, social media is a much better platform for this than books – partly because of its immediacy, but also because it leaves my books and art with the opportunity to be less specific and open.

The other two reasons sort of go hand in hand. In the last couple years it seems that global politics have become much more fearful and angry, and maybe I was slightly more attuned to that as around the same time, my wife and I realised we were going to have a baby. This changes the filter through which you view most of your life. I thought, if I don’t speak up about the things that bothered me, then who would? I also wanted to be able to look my children in the eye in years to come and say I tried to play my part and stand up for what I felt to be right.

Democracy can be an easy thing to take for granted, and is still a relatively novel way for humans to conduct themselves, historically speaking. It could just as very well be snuffed out, by those who might benefit from its demise and by the inaction or ignorance of the masses. 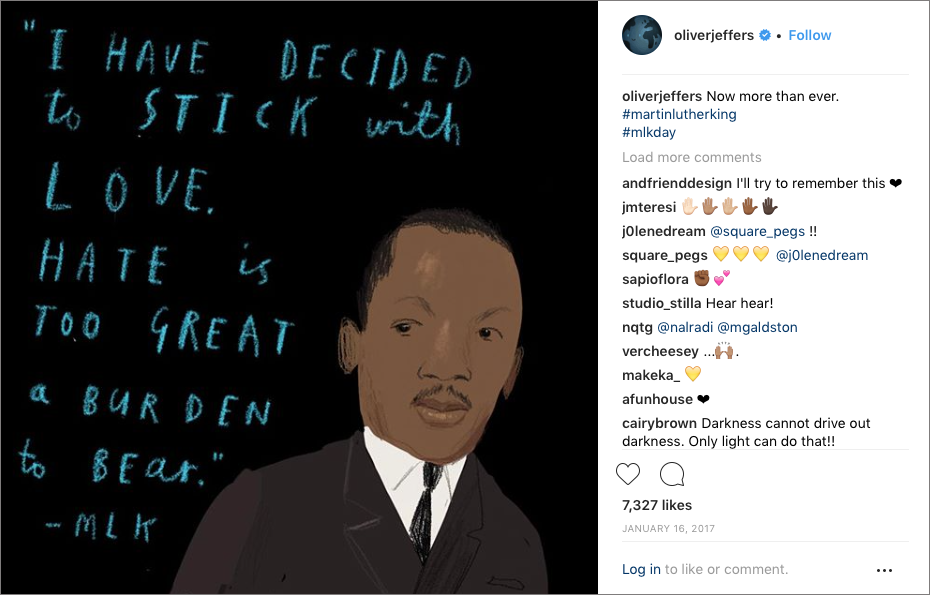 What role do you think illustration has in agitating and questioning politics?

Well, art can be a very economical and direct way to get to the heart of something. You can convey an emotion or sentiment with a degree of immediacy and elegance. I think art has always played a very important role in questioning politics, and representing a public conscience. There is some really interesting art being made that is showing up at protest marches in the form of homemade signs. 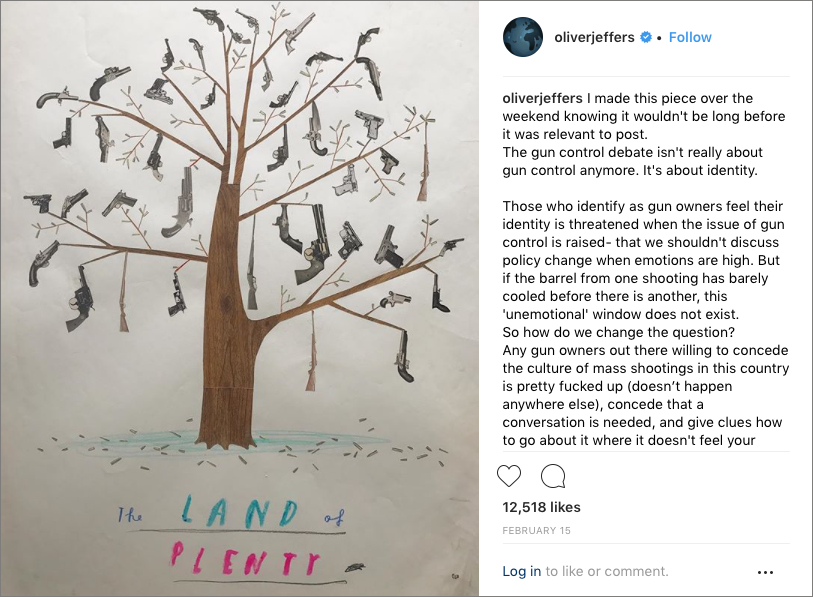 What do you want to achieve with your images  / do you get feedback?

I think what I would most like to accomplish is to foster healthy discussion, and encourage empathy.

I believe too much of social media is an echo chamber, a reality that has been edited to suit your own beliefs, with too many people yelling and not enough people listening. Anonymity inspires enough bravado for people to say things on social media they wouldn’t dare in real life. Being conscious of not wanting to add to all the angry noise, I try to keep things optimistic, hopeful, or at least suggest a solution or call to action when I can’t be. 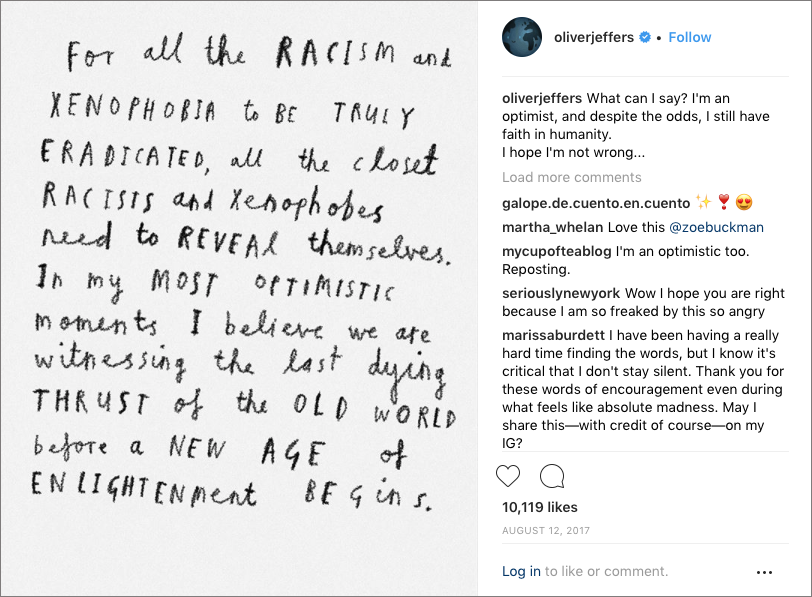 I do get feedback. Generally it’s positive. I think people respond well to the sincerity of my posts. I get blowback too. Sometimes more artfully stated, or well researched than others. I generally tend not to engage, initially as I was wary of it taking too much of the already little studio time I have these days, but I have found if I’m attacked, other people tend to defend me better than I might myself. By staying out of the fray, it keeps the integrity of my posts a little cleaner. 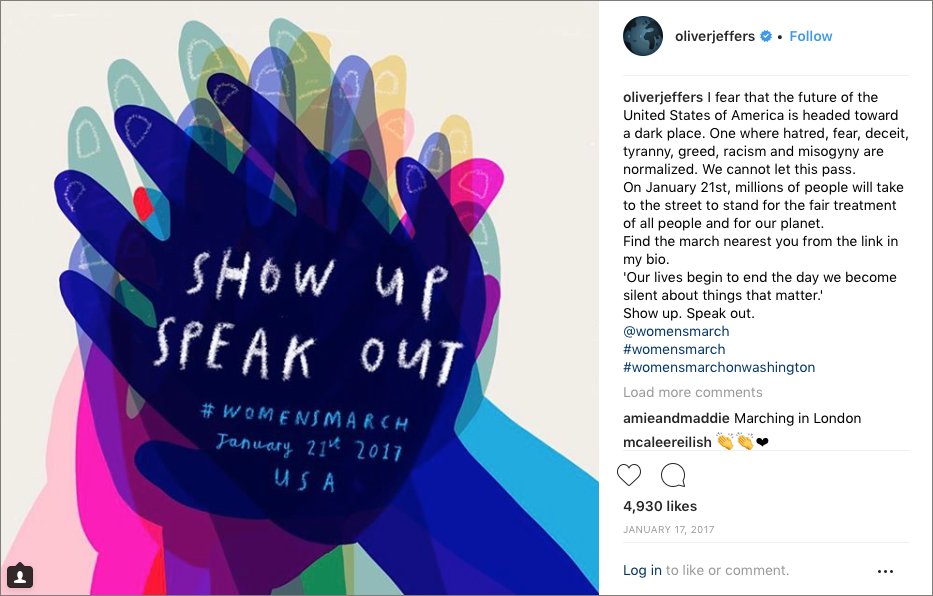 Much of the work is USA focused  – how does it feel to be an artist in the States right now?

My posts do have a US leaning these days, partly because I’m based here, but partly because it feels like it’s the epicentre of negative and aggressive political attitudes. While I feel like there will be longer consequences (unless things get much worse here) from Brexit than the damage Trump will leave in his wake, there is not much that people can actually do about Brexit right now. It’s a stalemate waiting game… whereas it feels like there is a new fire being lit every day in the US that needs extinguishing.

It is a frustrating time to be in here at the minute. New York doesn’t quite feel like the rest of the country, but it is still subject to the same 24 hour news cycles that is fostering fear and drowning art and culture. The geographic beauty of the country, the historical optimism, and the county’s true diversity are all being betrayed by ugly, aggressive and self-centred governing.

All that said, I actually believe the greatest crisis humanity is facing is that of climate change, and the reality that it is being so willingly swept under the carpet is simultaneously alarming and perplexing. Greed really is blinding. What we are prepared to sacrifice at the expense of future generations for immediate pleasure, ease and comfort is astounding. There is a groundswell zeitgeist perspective shift occurring. But much too slowly in my opinion. 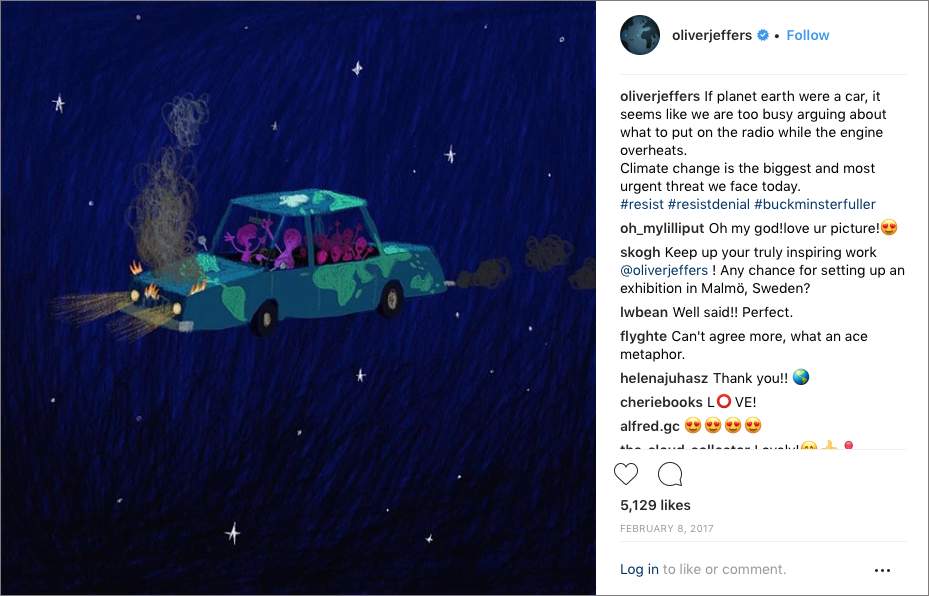 Artists as activists – who inspires you? 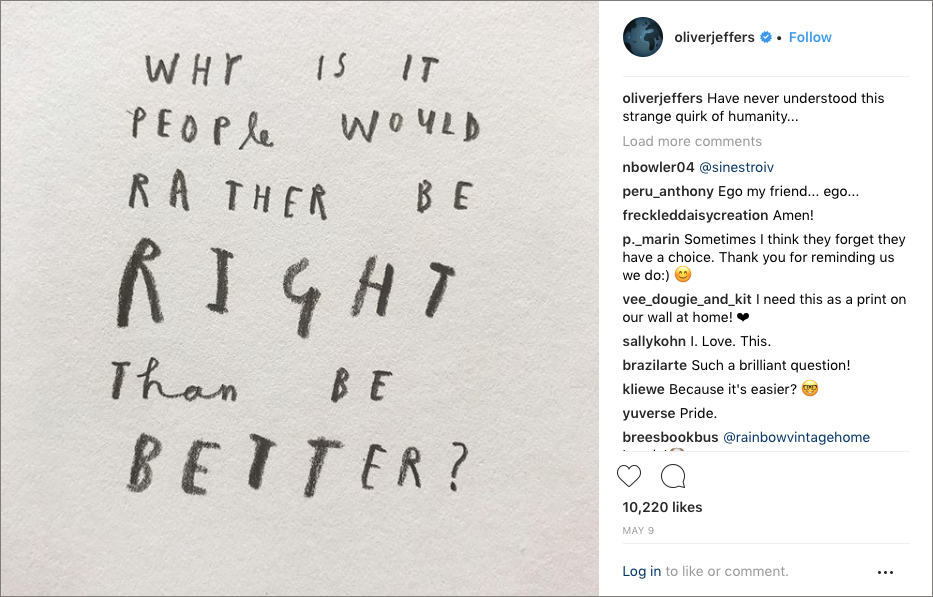