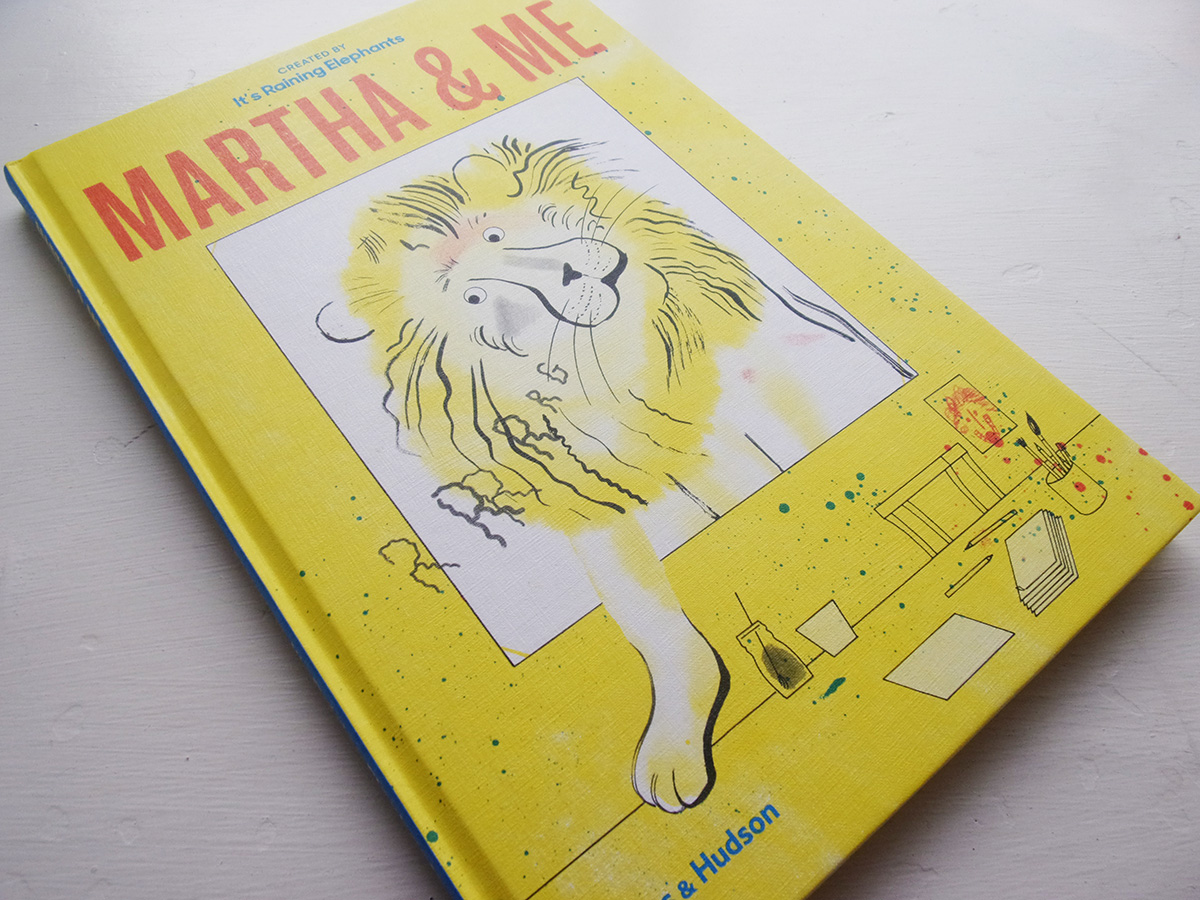 ‘Working in a duo can be like a catalyst. It’s easier to take decisions because you do not spend too much time in your own head.’

This is one of several reviews about books that have been born out of a longstanding collaboration by different creative duos, in which I try to satisfy my curiosity as a solo illustrator as to how two individuals are able to get together and make work as one, two or three?

Nina Wehrle and Evelyne Laube have been working collectively since 2008 as It’s Raining Elephants after studying together in Luzern, Switzerland. Collaborating has given them their share of logistical difficulties, involving long distances and coordinating their individual timetables sufficiently to keep joint projects on the tracks. Consequently, each project is the result of an intuitive management of their different availabilities and strengths, and a record of how they have best chosen to employ those resources at a given moment in time. This also applies to the process of making, as in their Bologna prize winner Die Grosse Flut (The Great Flood)* illustrated with large drawings produced in alternation as a dialogue, until a point was reached where they both felt it was the right moment to stop. 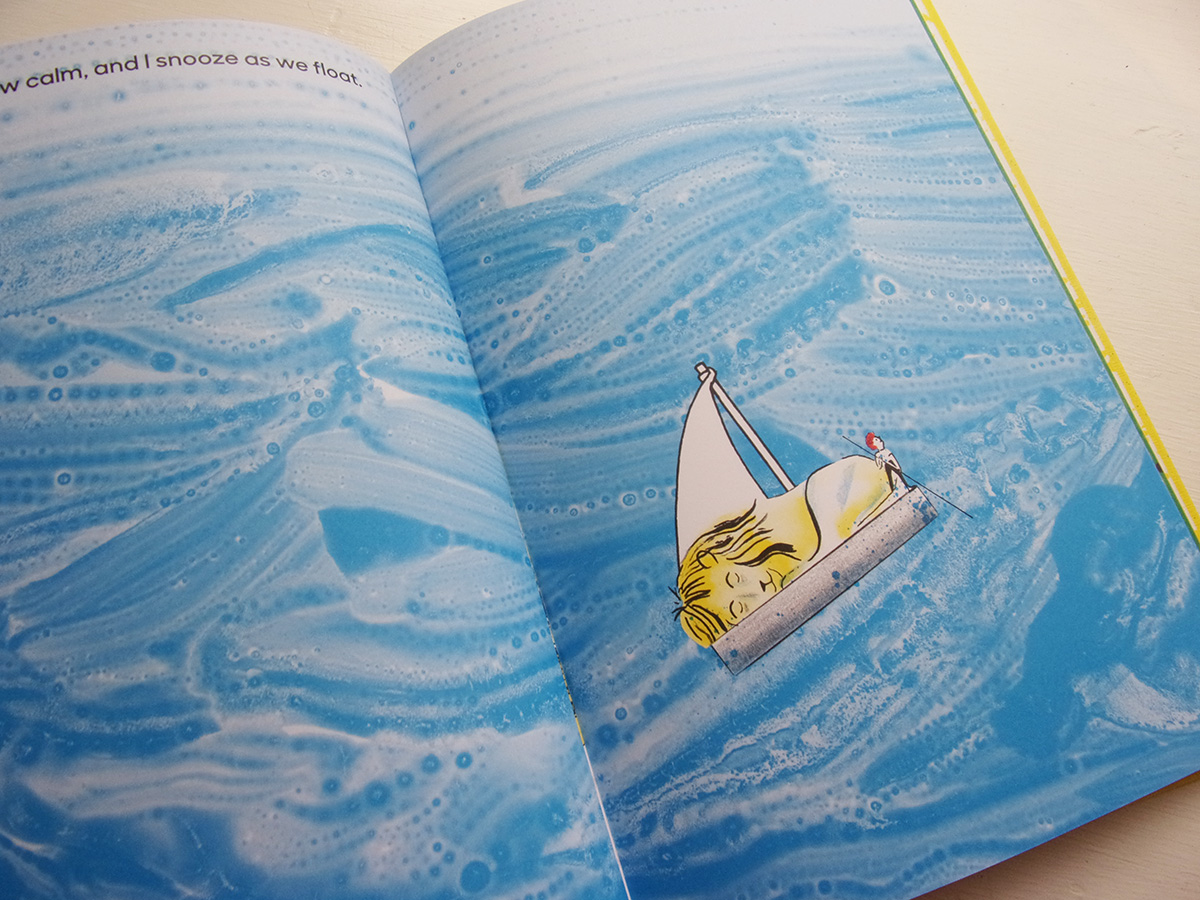 For them a book is not to be reduced to a simple question of “who did what?”, and any questioning in that direction will be answered with “we both did!”. Which although frustrating at first becomes a reasonable reply because something happens when they bring their skills together on a project; the resulting work goes beyond their individual expectations. A visual sum where 1+1=3 that can no longer be reversed into two separate halves without a subsequent breaking of the magic.

Martha & Me is the fruit of learning to trust in intuition and being responsive to it, both in oneself and in someone else. The following questions and answers reveal something of how it came about for Nina and Evelyne. 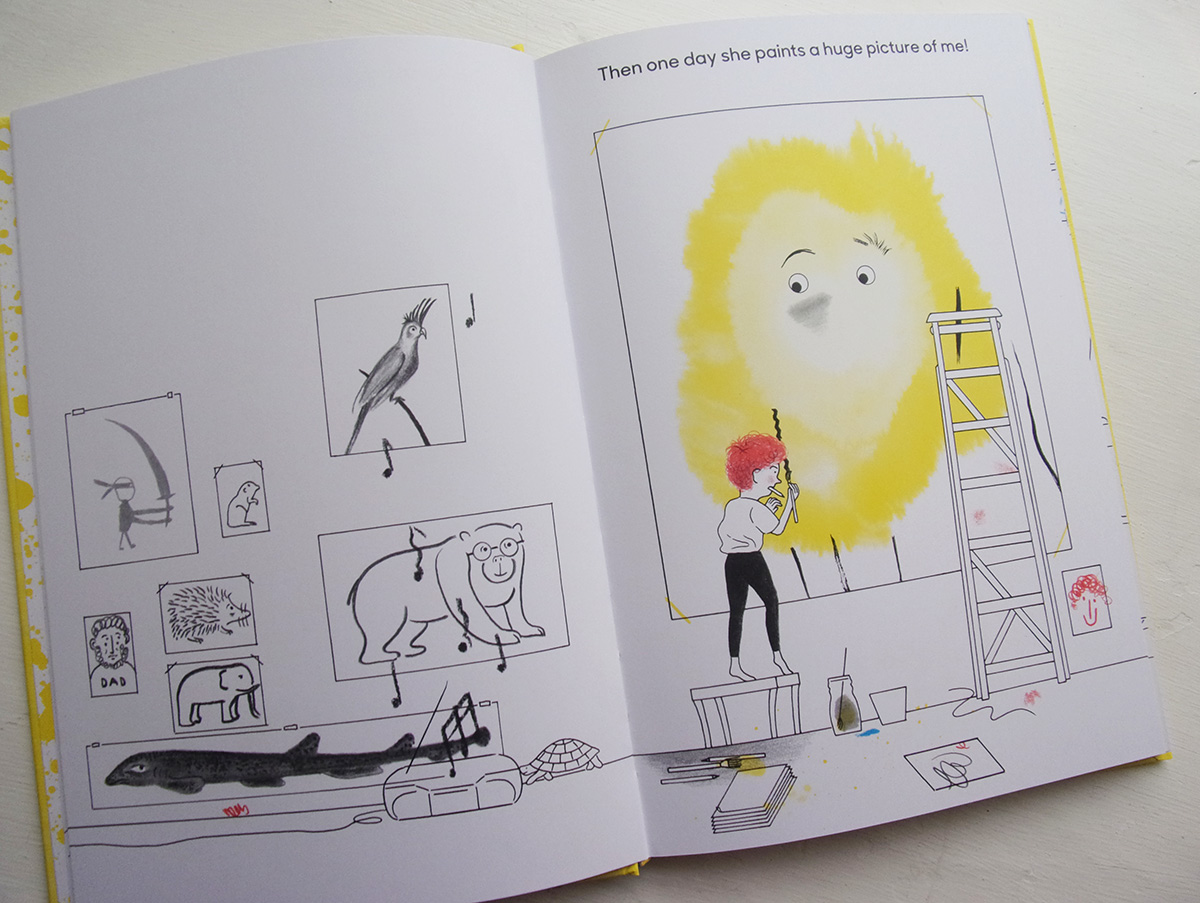 First of all we are good friends driven by the joy of doing things together. We share many things in life and allow ourselves to learn together and share our discoveries. We have been working as a duo for the last ten years and it never felt unusual to us. Musicians play together, architects plan in teams and cooks rarely cook alone – “Why not illustrate together?” Besides, we like to play, make plans and cook together too.

When we collaborate, we are just two people in the service of a project. It is never important who had the best idea or who did which drawing. We simply try to find good things together. Clients, publishers, graphic designers, etc. are part of this creative process too. It’s a gift to work hand in hand with people you trust. 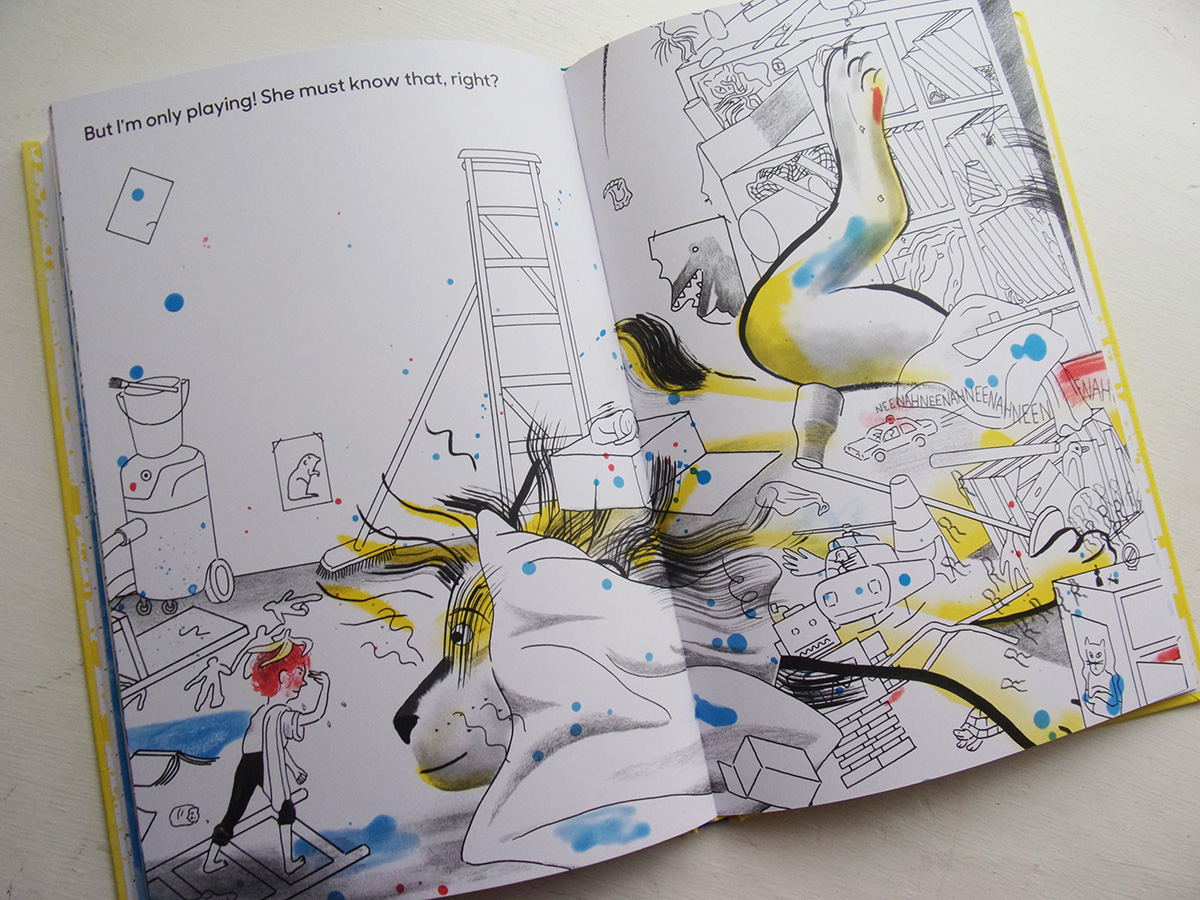 We developed our own methods step by step. At the art school in Luzern we were lucky to be part of a very motivated bunch of 12 illustration students. In this class, we often worked together in different constellations. We noticed that the two of us were able to work very closely on a common vision, to trust and surprise each other. Later in our studio in Berlin we became surrounded by very ambitious and interesting artists and design teams. This artistic environment was very encouraging and had a big impact on us.

We like playing with rules and define just a few things like technique, topic, format, etc. before starting to draw. After that we come together, show and discuss our drawings and ideas to take further decisions. We rarely get lost in long discussions, because we trust in trying out things visually. Sometimes it takes many rounds until both of us are satisfied.

Cover ideas for Martha & Me

Working in a duo can be like a catalyst. It’s easier to take decisions because you do not spend too much time in your own head. The exchange helps to clarify vague ideas and to check their visual potential.

Lately we work more independent from each other. The common time in our studio in Luzern is limited because of family plans and teaching. We share ideas, materials and have many projects together, but the process of creating is often singular. New conditions bring new forms of collaboration and we are curious to test them out.

Cover ideas for Martha & Me

How does this book fit in with what you have already achieved individually and/or as It’s Raining Elephants?

It’s just another step.  We always have been passionate about picture books, and after our publication With Die Grosse Flut we got a lot of encouragement in this field.

More and more we are interested in storytelling as a whole thing, including writing and drawing. There are so many things to discover. On the other hand we love the diversity of our work and so far we are not able to focus just on one media. We run the ceramic label Hoi, do commissioned illustrations and teach quite a lot. It is refreshing, but sometimes it drives us crazy too.

I (Nina) wrote and drew the story when I lost someone (a lion) I loved. To overcome that experience I was using the magic of drawing and imagination like Martha does. Evelyne was an important sparring partner in the whole process and in the end she jumped in and we drew some pages together.

We don’t so much like the question of authorship in general. All our projects are planted in the same garden and we both take care of it. 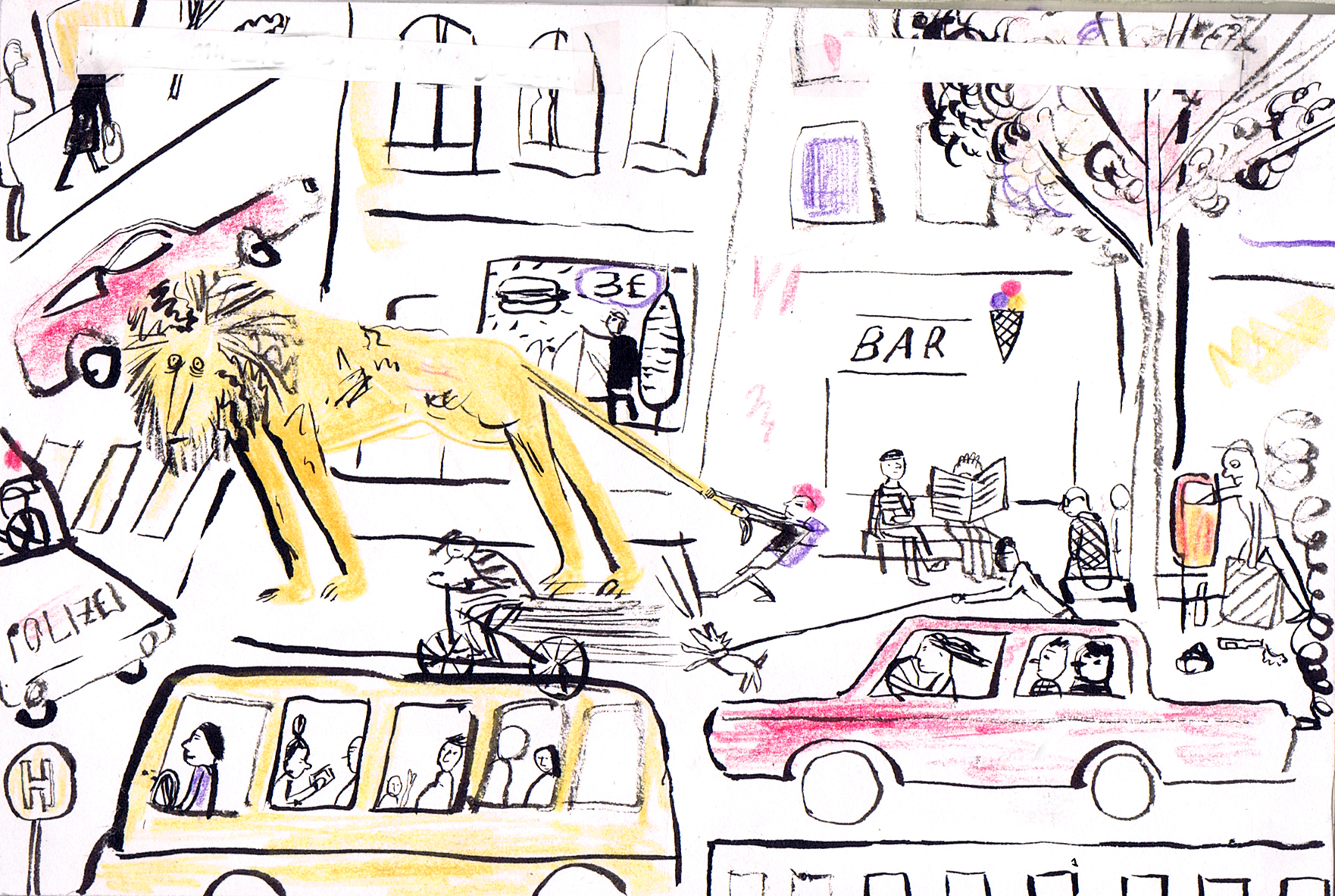 Visual for Martha & Me

Did you know what you wanted to achieve visually when you started work on this project, or did the idea evolve during the making of the book?

The idea of the story did not really change from the first draft to the final book. Anyway, it was a long journey and with every decision I was confronted with new questions. Sometimes I had a hard time to keep the freshness of the first sketches. I worked for weeks on the storyboard, changed things again and again until it felt right.

Visually the book developed a lot with the final drawings. I was looking for a vibrating contrast between the colourful and expressive lion and Martha’s ligne claire and her black and white world. Accidents and playing around with brushes and ink helped a lot. 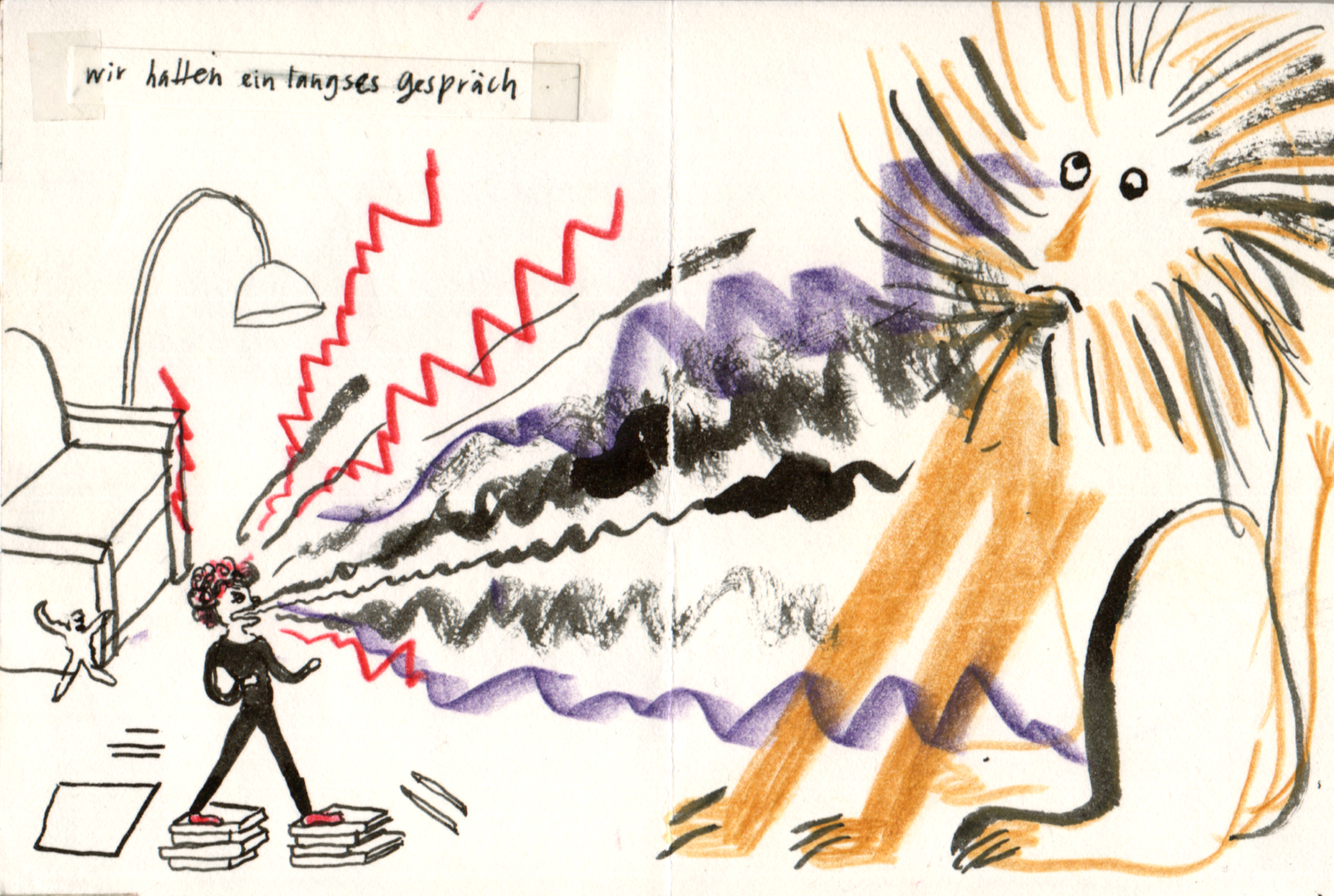 Visual for Martha & Me

What influences come to bear on the design and style of your illustrations?

Lot of things are taken from real life and personal memories. For example all the furniture is inspired by my temporary home in Hamburg. I lived there with a friend and her seven year old boy, who was a passionate drawer at that time. 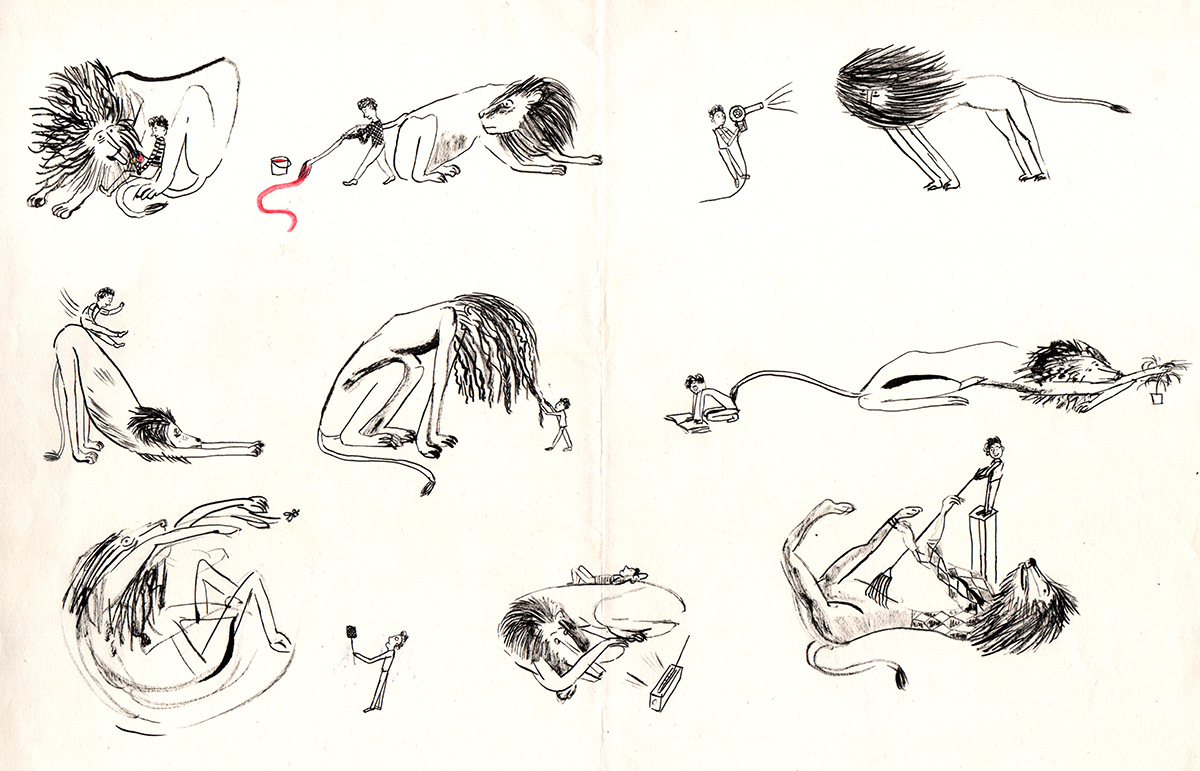 My mother has a big collection of old picture books which keeps inspiring us over and over. We love the timeless quality of the books from Hans Fischer, Roger Duvoisin,  André Francois, Lisa Wenger, Paul Rand and Heiri Strub.

We admire illustrators who can write like Tomi Ungerer, Reiner Zimnik, Maurice Sendak or Kitty Crowther. And of course there are contemporary influences like for example Miroco Machiko from Japan or Junko Nakamura.

All artwork by It’s Raining Elephants 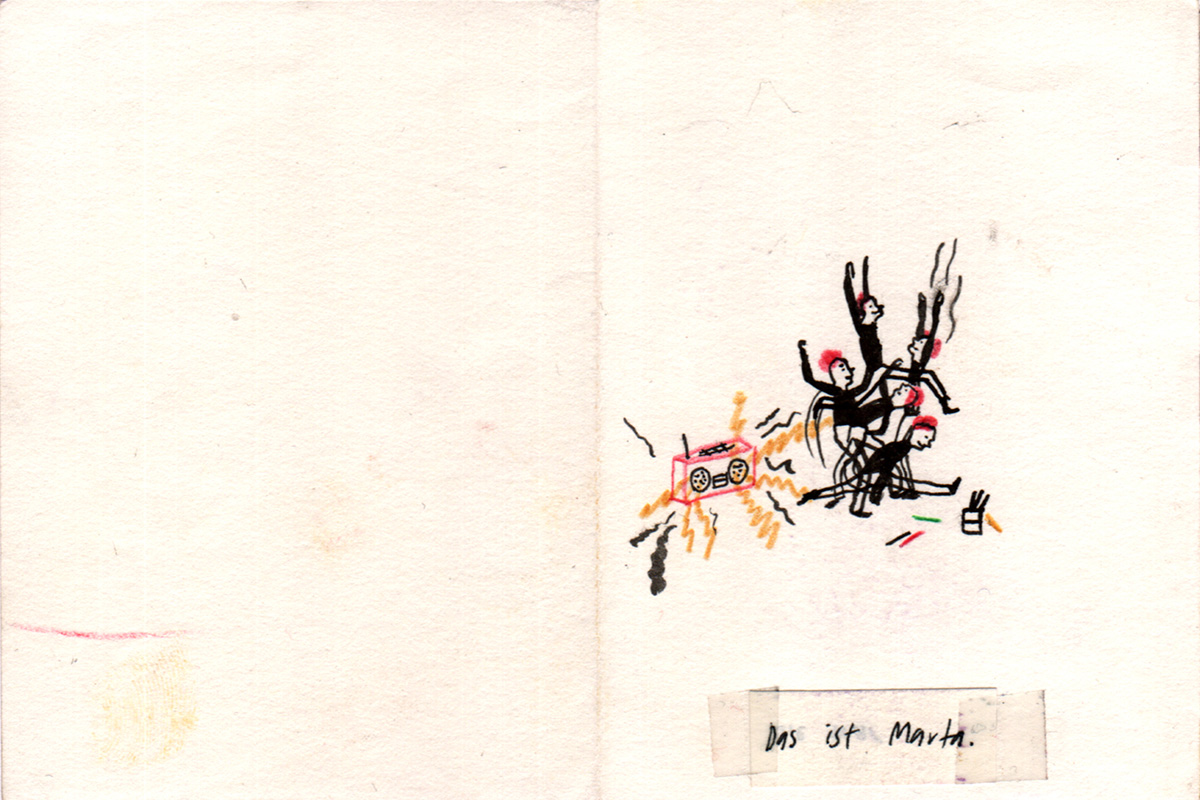 Sketches for Martha & Me