And other work by John Minton 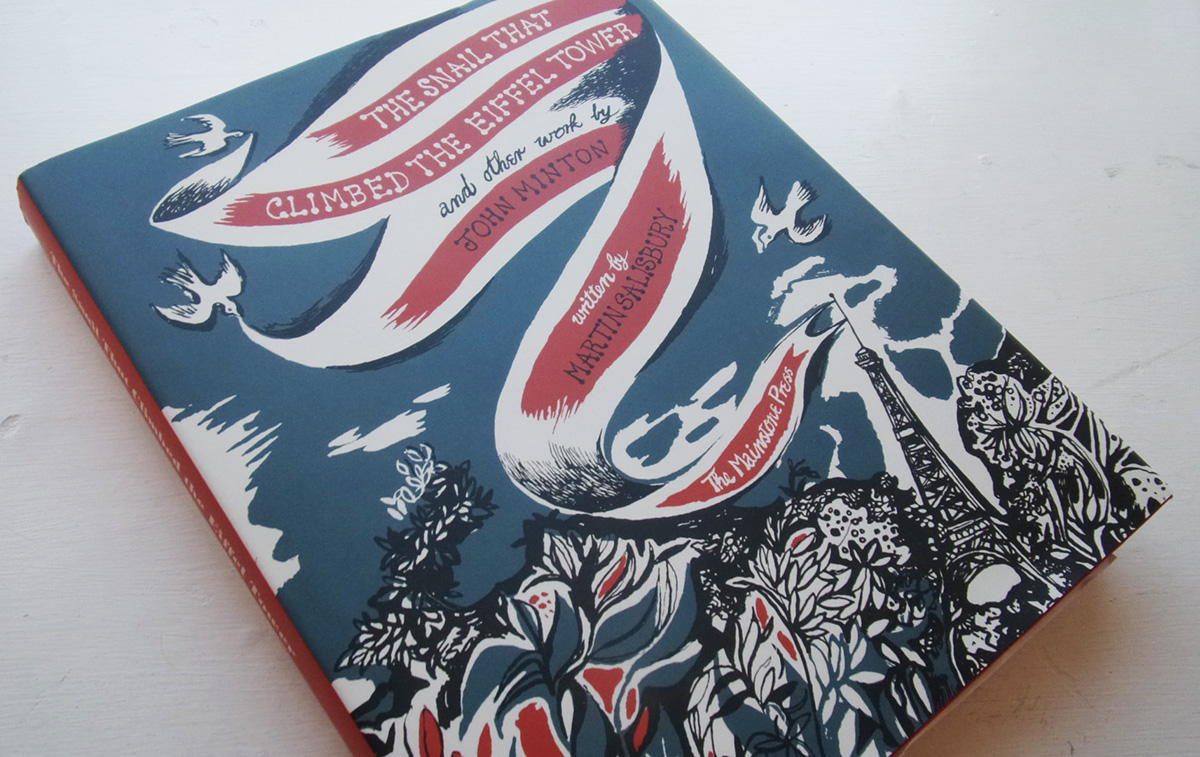 In a time when we are so used to viewing images at speed on devices, there’s something to be said for taking them in via the slower medium of a substantial, well-designed book. We have author, Martin Salisbury, to thank for compiling this affectionate yet not uncritical review of John Minton’s illustration and fine art output.

Known as a painter, Minton (1917—1957) created a substantial body of illustration work over a decade from the mid 1940’s. The opportunities available for a person of his versatility were significant in the post war period and his commissioned work was used on posters, book covers and interiors, in magazines and also wallpaper. 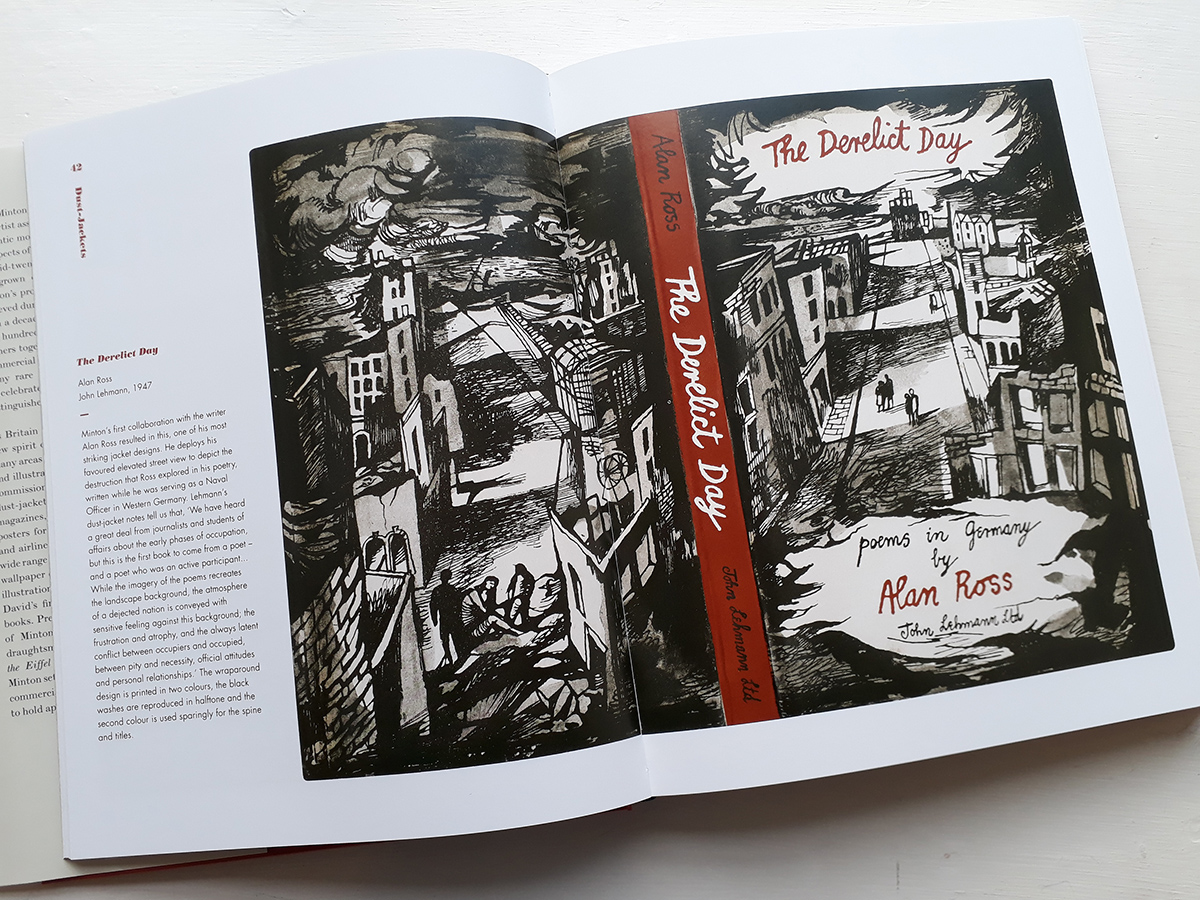 Many of his illustrations have a brooding, moody atmosphere with a very effective use of light and dark shade, often using only a couple of colours. Moons glow, shadows loom and the eye is drawn through compositions down streets or over hills. More sunny images are equally well represented, especially with Time Was Away – A note book on Corsica, which Salisbury identifies as ‘one of the most significant illustrated books of the twentieth century’. This travel book was created by writer Alan Ross and Minton in 1948 after visiting the island, and contains dramatic, textural tone drawings in either line or limited colour which are clearly the work of in situ drawing conveying a convincing sense of location. It’s wonderful, vital work. 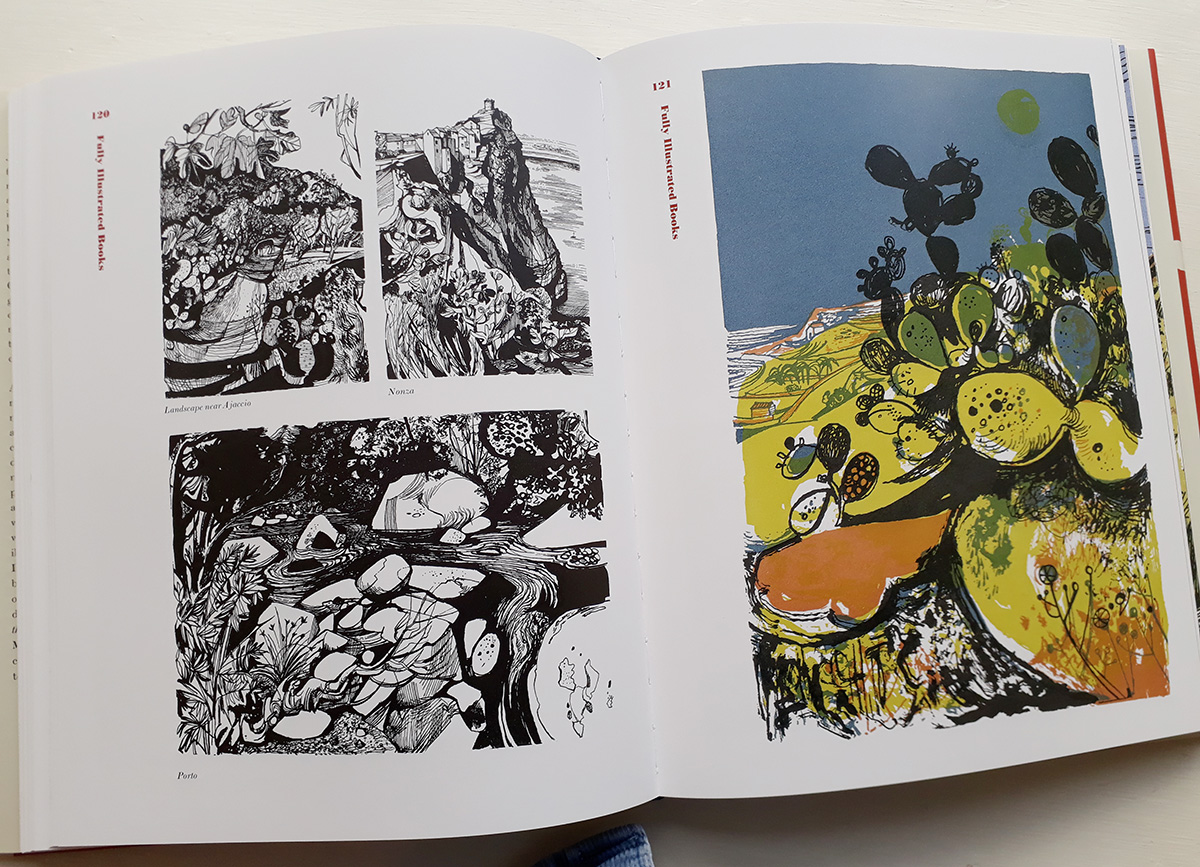 Time Was Away – A note book on Corsica

A Book of Mediterranean Food by Elizabeth David is another of Minton’s successes, with the colourful cover presenting tantalising foodstuffs no doubt pretty rare in rationed 1950’s Britain. A big seller at the time, the illustrations feed the fantasy of amazing food which has carried on to contemporary times where cookbooks are often purchased to dwell on rather than utilise. 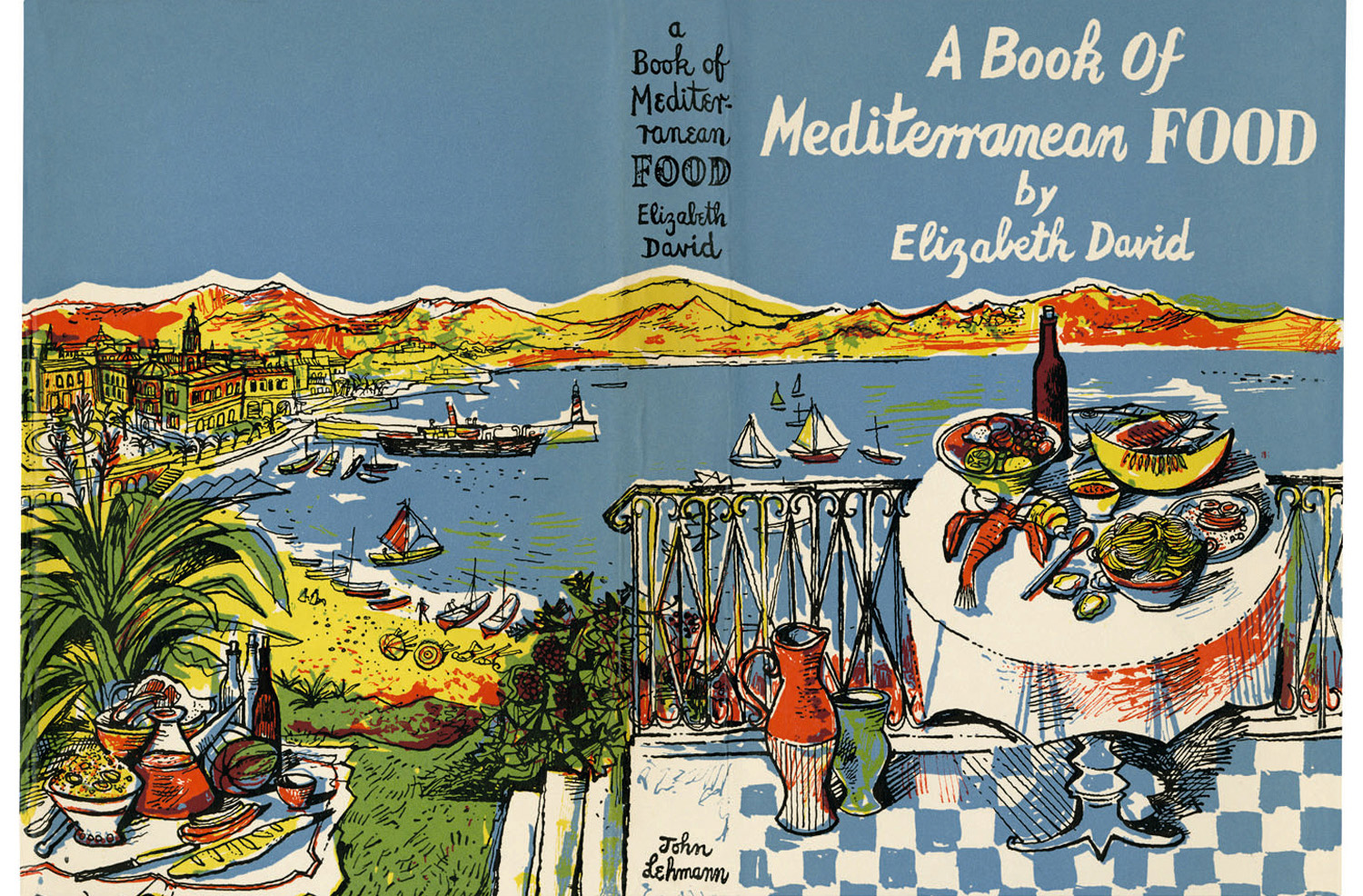 Minton often created his own typography for book covers, with lettering forming a whole with the illustration. When the title is typeset the integration is less successful, but the image still draws the viewer in as he brings a tangible feeling of drama or contemplation to many of the novel covers.

Painting appears in Minton’s commissions from the General Post Office and London Transport with approaches that go from the graphic to the more layered wash. These images carry traces of his drawn illustrations, and although the full colour artworks are strong images, it’s Minton’s limited palette illustrations which reveal his eye for using just a few colours to lift and increase the depth of his black line. 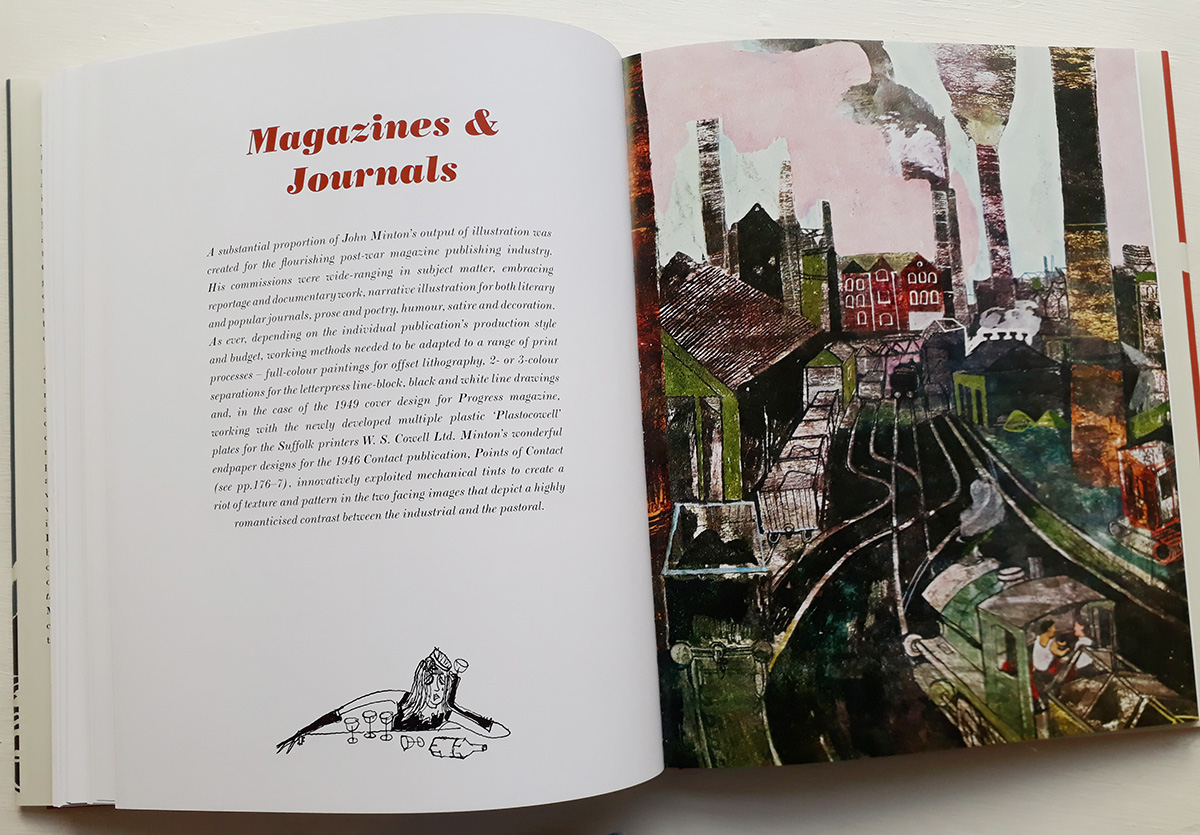 However, it seems his talent wasn’t enough to keep him sustained, and in an age where his homosexuality could mean concealment and deception, he suffered from depression and self-doubt. He was found dead from an apparent overdose of sleeping pills before he’d turned 40.

The curious title (The Snail that Climbed the Eiffel Tower) is from a book of the same name – Minton’s sole children’s picture book, a collection of stories by Odo Cross, which is featured in the collection. We don’t want illustrators to have to scale national monuments to be remembered, and Salisbury has done a great service bringing together a large body of Minton’s commissioned work, keeping an immensely talented illustrator in sharp, well deserved focus. All the more for the rest of us to enjoy. 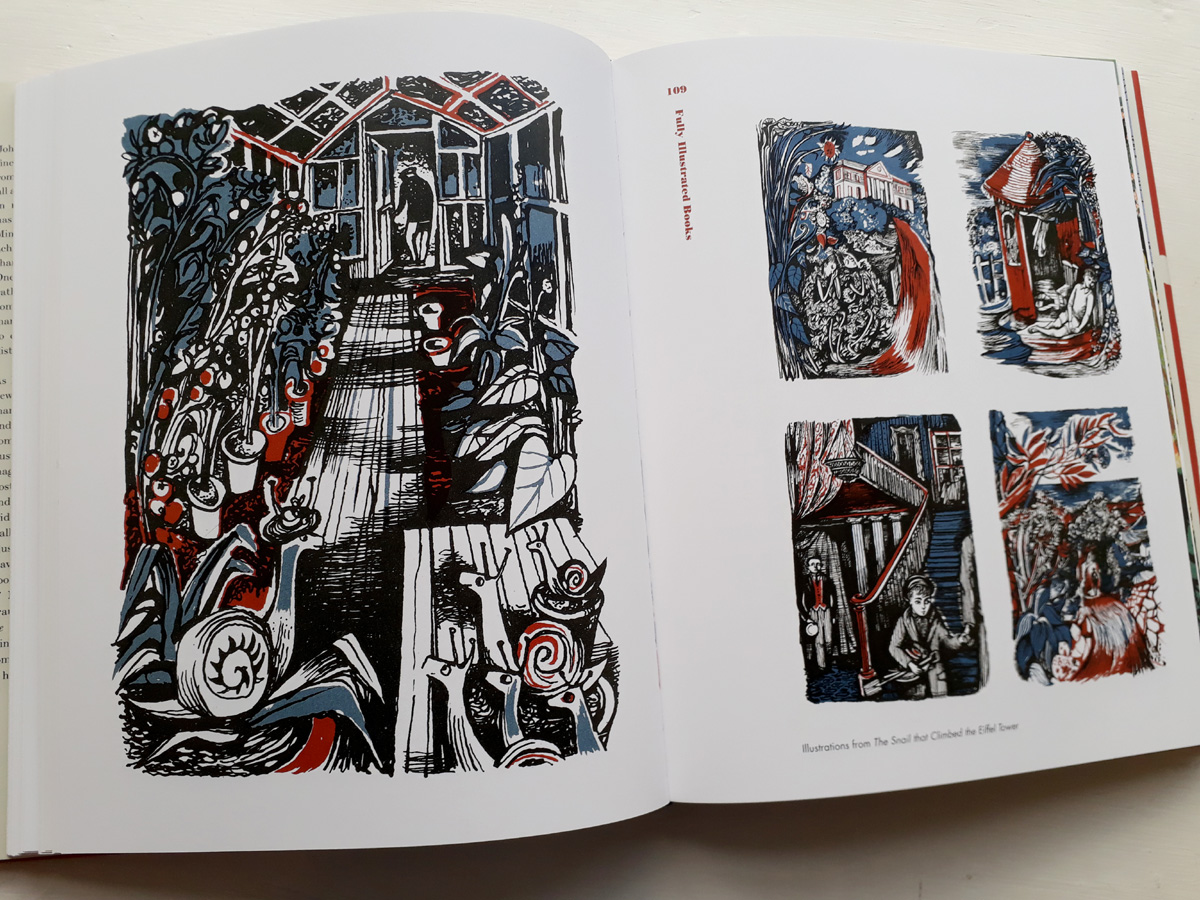 The Snail that Climbed the Eiffel Tower