The longlist for the prestigious CILIP Kate Greenaway Medal has been published. Celebrating the best in children’s illustration, the Medal is unique in being judged by children’s librarians. 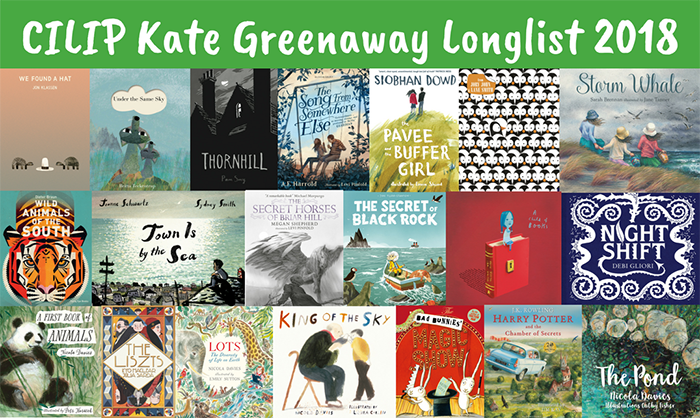 2017 Kate Greenaway Medal winner Lane Smith is one of 20 illustrators included in the 2018 longlist, with Penguin Problems. He is joined by former Kate Greenaway winner Levi Pinfold, who is longlisted twice this year for two different books: The Secret Horses of Briar Hill and The Song from Somewhere Else. Alongside a raft of well-known illustrators, they are up against Júlia Sardà’s debut picture book, The Liszts, and A Child of Books, a collaboration between first-time children’s writer and illustrator Sam Winston and Oliver Jeffers.

For the second year in a row, one book is in the running for both Medals. The Song from Somewhere Else, written by A.F. Harrold and illustrated by Levi Pinfold, appears on both the Carnegie and the Kate Greenaway longlists, just as Brian Selznick’s The Marvels did in 2017. Should it win both categories, it would be the second double win in the Medals’ long history, the first being A Monster Calls in 2012, written by Patrick Ness and illustrated by Jim Kay. Ness, who has won the Medal twice (with A Monster Calls in 2012 and Monsters of Men in 2011), continues his unbroken record of being longlisted for every one of his seven books for young people.

AOI Patron Oliver Jeffers has been nominated for his book with Sam Winston, A Child of Books.

2. King of the Sky by Nicola Davies – illustrated by Laura Carlin (Walker Books)

3. The Pond by Nicola Davies – illustrated by Cathy Fisher (Graffeg)

7. A Child of Books written and illustrated by Oliver Jeffers and Sam Winston (co-creators) (Walker Books)

8. Harry Potter and the Chamber of Secrets by J.K. Rowling – illustrated by Jim Kay (Bloomsbury)

9. We Found a Hat written and illustrated by Jon Klassen (Walker Books)

11. The Song from Somewhere Else written by A.F Harrold – illustrated by Levi Pinfold (Bloomsbury)

13. The Pavee and the Buffer Girl written by Siobhan Dowd – illustrated by Emma Shoard (Barrington Stoke)

15. Town is by the Sea by Joanne Schwartz – illustrated by Sydney Smith (Walker Books)

19. Under the Same Sky written and illustrated by Britta Teckentrup (Little Tiger Press)