The exhibition, which runs until the end of January at London’s Dulwich Picture Gallery is Britain’s first major retrospective of Jansson’s vast and varied portfolio, and brings together 150 of her works tracing the key stages of her prolific career, Moomins and all. The display is elegant and playful, and brings all the charm of Jansson’s characters to life. 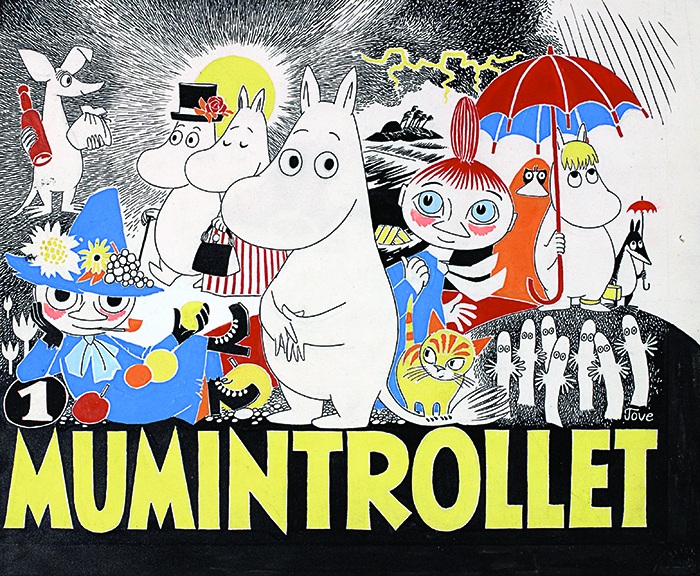 Tove Jansson grew up in a family where everyone was an artist; her father Viktor was a celebrated sculptor, her mother Ham, a graphic artist. It was massively important to her that she was respected as a fine artist as well as for her work as a cartoonist, and this becomes a difficulty that Jansson struggled with throughout her life. Her fine art remained side-lined in her lifetime in favour of the Moomin comics and books (above) which becoming all-encompassing, and, at times, suffocating (Seriously, watch Moomintroll grow from half-height in some of the earlier comic panels to a bigger, bouncier character threatening to burst out the top of the later cells)

The first two rooms in the exhibition feature work created before and during WWII and features much of the fine art that Jansson worried so much about, varying in subject from some very sweeping painterly landscapes with faceless figures, to some very striking self-portraits. Stung by some of the criticism of her paintings as a young woman, she moved from a more ‘narrative’ style in images such as ‘The Family’ (a very interesting family portrait that shows Jansson and her family caught in a moment in war, and to my mind one of the jewels of the exhibition) and tried to abandon it in favour of the more painterly style shown in the landscapes, and eventually her last ever painting ‘Self Portrait’ from1975, that shows broad brush strokes and a mysterious, unfathomable expression. 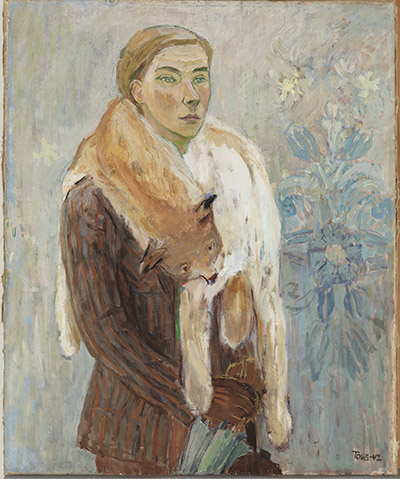 The next two rooms focus on Jansson, the cartoonist. The Moomins are introduced in their lovable, and yet surprisingly complex tales of tolerance, hope and disappointment that invoke a certain childlike joy. The shift in the medium and tone is striking, but does much to show Jansson’s versatility as an artist, both as a serious painter, and as a storyteller of fairy tales. There is even a cosy reading room, perfect for little ones (and big ones) to start an adventure in Moominvalley, a very thoughtful touch (though the low cushions are a struggle!)

Further on through the exhibition are her classic book illustrations, from three large new interpretations Jansson did of Alice in Wonderland (below), The Hunting of the Snark, and The Hobbit. Anyone thinking of Moomintroll dressed as Gollum will be disappointed, for Jansson’s tight but expressive lines and compositions suits both narratives well, an eye-opener for bibliophiles who know the stories. 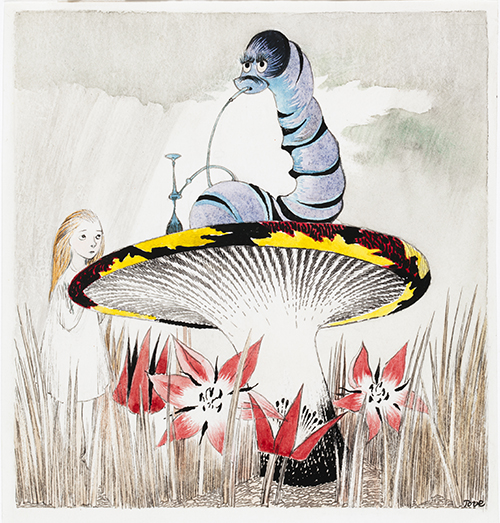 Illustration for the book Alice in Wonderland

The fourth and fifth rooms deal focus on the Moomin comic strips that took so much of Tove’s time. Financially, they secured her living for the first time in her life, having previously had to exchange her work in return for firewood. A series of comic works feature that were only found by the British Cartoon Archive this year, and there are a series of Moomin figurines created by Jansson and her partner Tuulikki Pietilä that stand only a few inches high, but speak of cosy evening spent bringing familiar friends into 3D. Look out also for the small but significant detail that makes Jansson possibly a comic book first; the dividers between cells are not just lines, but instead bulrushes, palm trees or a hose.

Over time, Jansson experienced a variety of emotions towards her dreamlike characters. Originally her companions through the horror and anguish of war, they became a millstone, shackling her to a gruelling work schedule of 6 comic panels a week for British newspapers, a job she would eventually give to her younger brother Lasse. With the public constantly clamouring for a new comic storyline, a new book, even a play and a TV adaptation, it was difficult to avoid the Moomins, particularly if you were their very own Moominmamma.

All of this is difficult to fathom however when you see the work. Delicate, and yet playful, sweet and also robust, Jansson’s feelings towards the world pours out in her penstrokes. It is very difficult not to press your nose up against the frames to look at the very tiny marks, and my friend had to drag me away. The range of themes, emotions and narratives in it show the depth of a woman, extraordinary in her own time, determined not to be confined to the fame of her work and at once political, fierce, loving and kind.