News / Reviews / Have You Seen My Giraffe? – book review 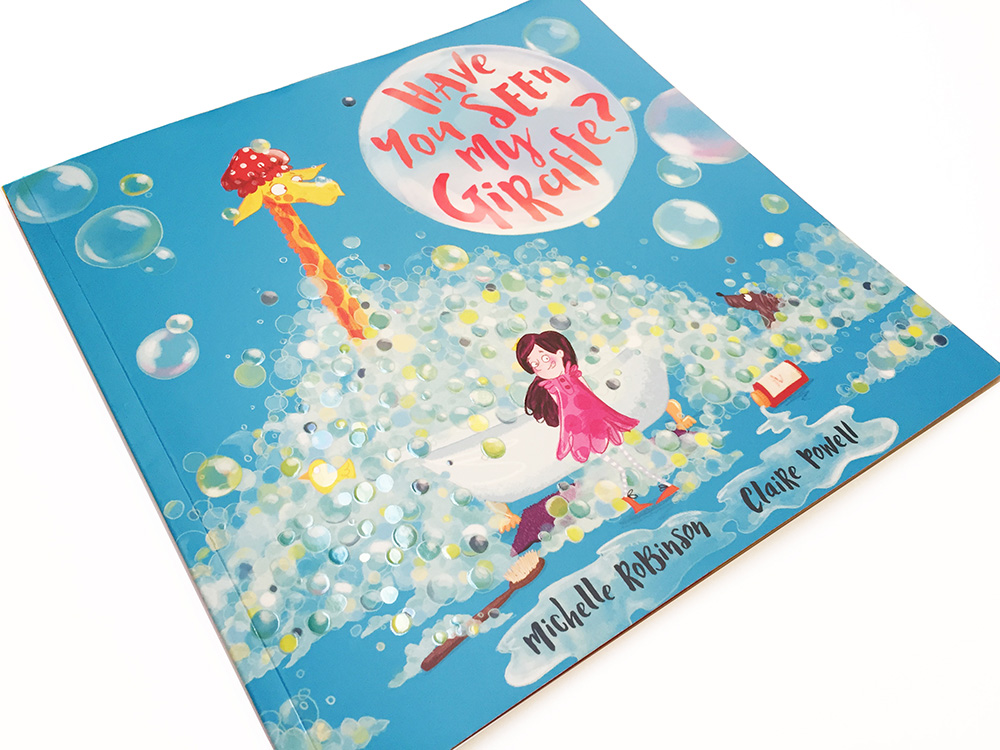 Where would you keep a giraffe? Well, they don’t give away goldfish at the fair any more; they give away giraffes, of course! This wonderfully silly premise is full of funny ideas from the start. My five year old co-reviewer was in stitches as the, ‘where should we hide the giraffe’ ideas become more and more outlandish. It’s a fabulous book for spotting new details in the illustrations, each time you read it and the ending is heartwarmingly satisfying. 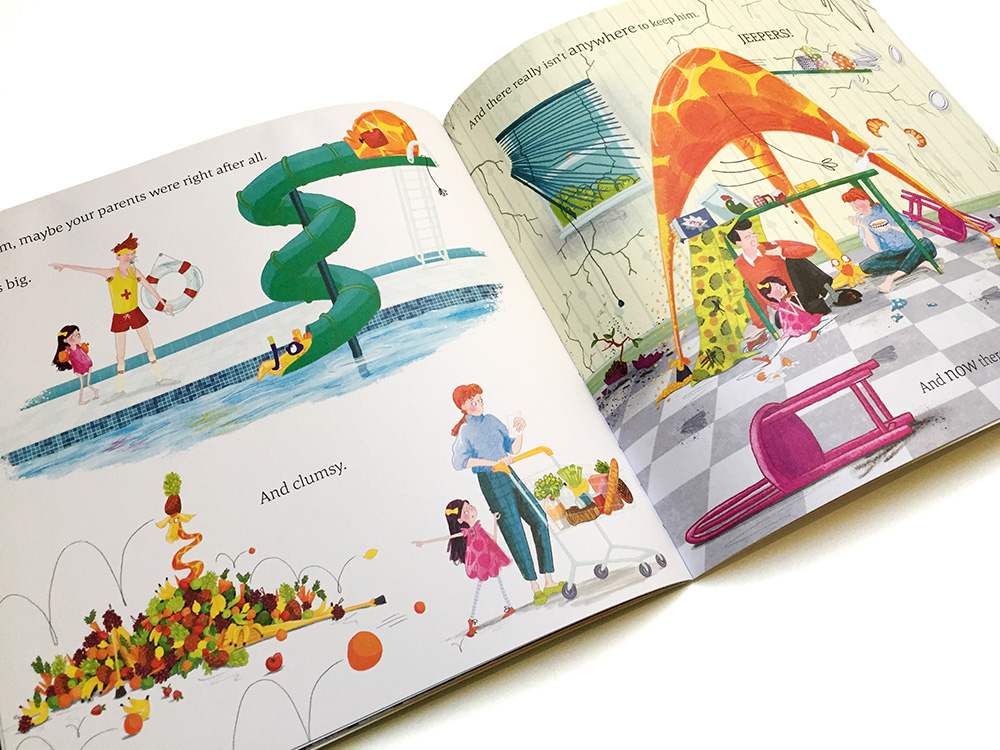 I asked the illustrator, Claire Powell, about the process of making this book.

Rachel Morris: Firstly, would you tell us a bit about how you got started on this project?

Claire Powell: I was commissioned in January 2016. I loved the text straight away and had lots of ideas as soon as I read it. It was a very exciting time. I’d left my job as a broadcast designer in December and to be commissioned to illustrate a picture book only a month later was a dream come true.

I pretty much always start the same way, with character sketches. My work always revolves around characters and I spend a lot of time getting to know them first. I want their expressions and reactions to be believable, and their personalities to shine through so that the reader can really identify with the character and the situation they find themselves in.

Once I know my characters inside and out it comes quite naturally to me to know how they’d react, though I often act it out. After character sketches I begin the roughs and I start on whatever spread I’m most inspired by, often leaving the hardest ones till last which is always a mistake, but I never learn! Recently I’ve started doing thumbnails first, but I didn’t with giraffe, I dived straight in. I love doing the roughs – there’s so much promise and I enjoy seeing the characters and story come to life.

RM: Was this a long project?

CP: The project lasted about a year, although I wasn’t working on it continuously. Roughs began in February and colour in May. I worked on the artwork until September, finishing in time for the 2016 Frankfurt book fair. Only small changes were made to the interiors after that. We did however take a few months to get the cover right – I’ll tell you more about that in a minute!

This was my first picture book so I found the colour quite a challenge. It sounds obvious to say, but it’s so much more complex colouring 12 spreads than a single illustration. It’s a real process of experimentation. Eventually you find your own rhythm but I found it quite daunting to start. I’m getting more confident with the artworking process now. 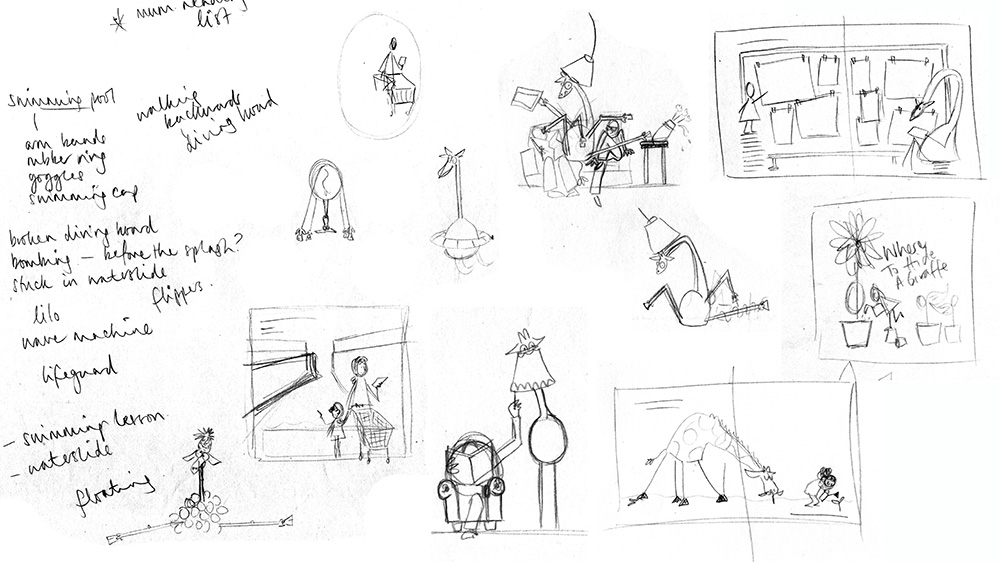 For Giraffe, I was lucky the art director Jane was supportive and encouraging. There are so many decisions to make and so many ways you could colour a book. I ended up using mostly hand made textures for Giraffe which I then composited digitally.

RM: How closely did you work with the writer, Michelle Robinson, on the book?

CP: I didn’t have any contact with Michelle during the project, the team at Simon and Schuster (Lara Hancock, editor and Jane Buckley, art director) acted as middle men. Michelle and I eventually met in person at a trade dinner Simon and Schuster were hosting in April. Since then we’ve had our book launch and done some school events together, with a few more scheduled once term starts up again. Michelle is such good fun and a seasoned pro – I’ve learned a lot from her.

RM: I like the way that, at the turning point in the story, the reader physically turns the book 90 degrees. That change in perspective adds a twist, doesn’t it? Where did that idea come from?

CP: I can’t take credit for that I’m afraid. The idea to turn 90 degrees was already in the layouts which Jane gave to me so I presume it was her idea. It works so well for the big reveal, the treehouse wouldn’t be the same if it was landscape. 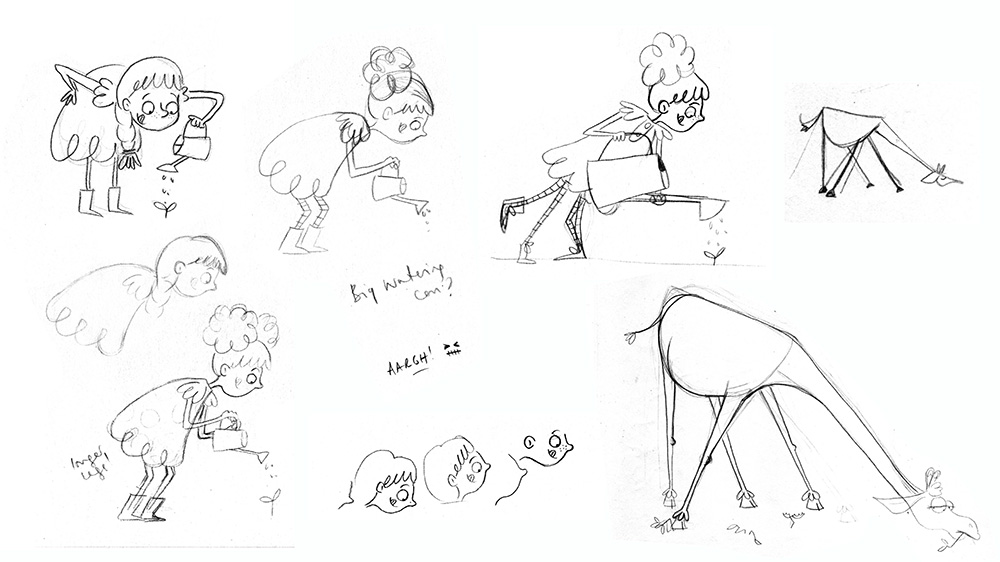 RM: I also really like the twinkly spot varnish on the cover. How involved in the design of the book did you get?

CP: I was very involved in the cover, end pages and title page. I did all the typography and I was rather pleased with my spotty end page idea. The interior type and design was all done by Jane and I didn’t have much involvement.

We went through multiple versions of the cover, eventually settling on my first idea – classic! We wanted the book to appeal to as wide an audience as possible, from Waterstones to Asda, London to Turkey! So finding an image that hit the sweet spot for all of them that was tricky. I’m glad we ended up with the bath, it’s the perfect scenario to bring out the best qualities in all the characters. 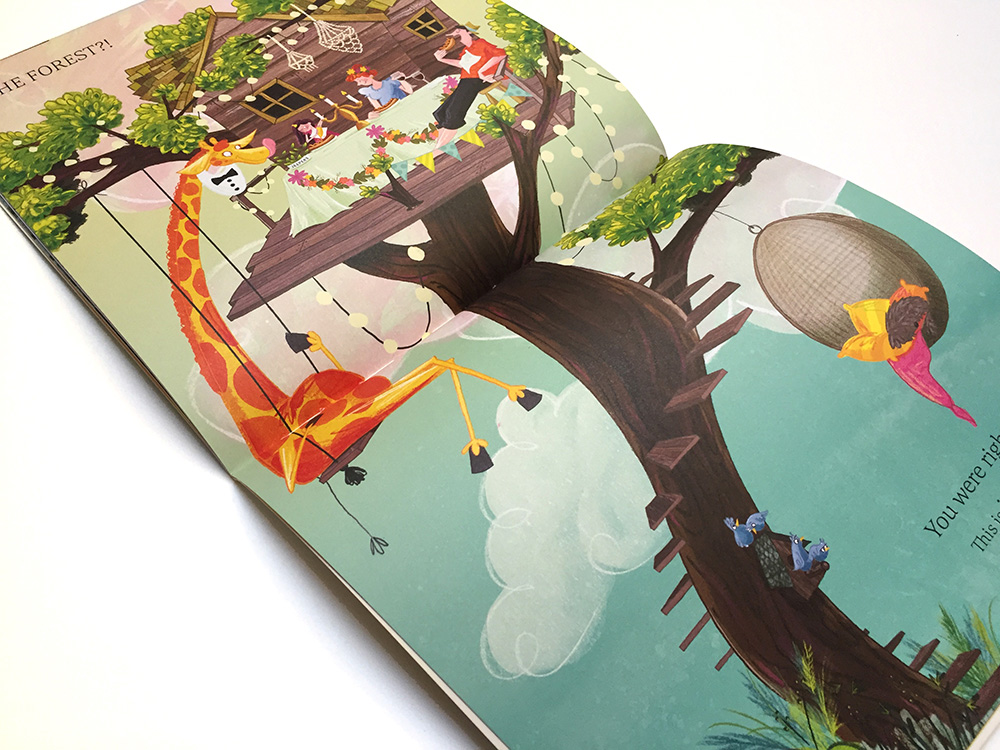 RM: You have distinct branches to your work…director, designer and illustrator. Does one inform the other?

CP: All my branches are intertwined! My dad is a printer and I spent a lot of time in his factory growing up and working for him when I was old enough. He taught me all about the printing process and I loved watching him work the big litho printers. I’m happy I’ve ended up in a profession that utilises the printed form. There’s a lot of nostalgia and happy memories associated with it for me.

At uni I studied graphic design and I was taught a traditional approach of tight grids and layouts, lots of typography drawn by hand, it was before students had computers and the internet was still dial up! Working in broadcast for many years hugely influenced my ability to tell a story in a short amount of time. Storyboarding, sequencing, composition – all directly translate into my illustrations. They are especially useful skills for picture books where it’s necessary to tell a narrative over a series of page turns. My animated short film is what led me back to illustration. I have a lot of respect for animators, it’s such an amazing skill to make something move. I knew I wouldn’t be an animator but I wanted to try. The process made me realise how much I’d missed drawing (I hadn’t done so for several years) and it reignited the spark! I used to feel disappointed I was arriving at illustration later in life but now I see the years of training in my dad’s factory, design and TV have provided a great foundation for where I’m at now. 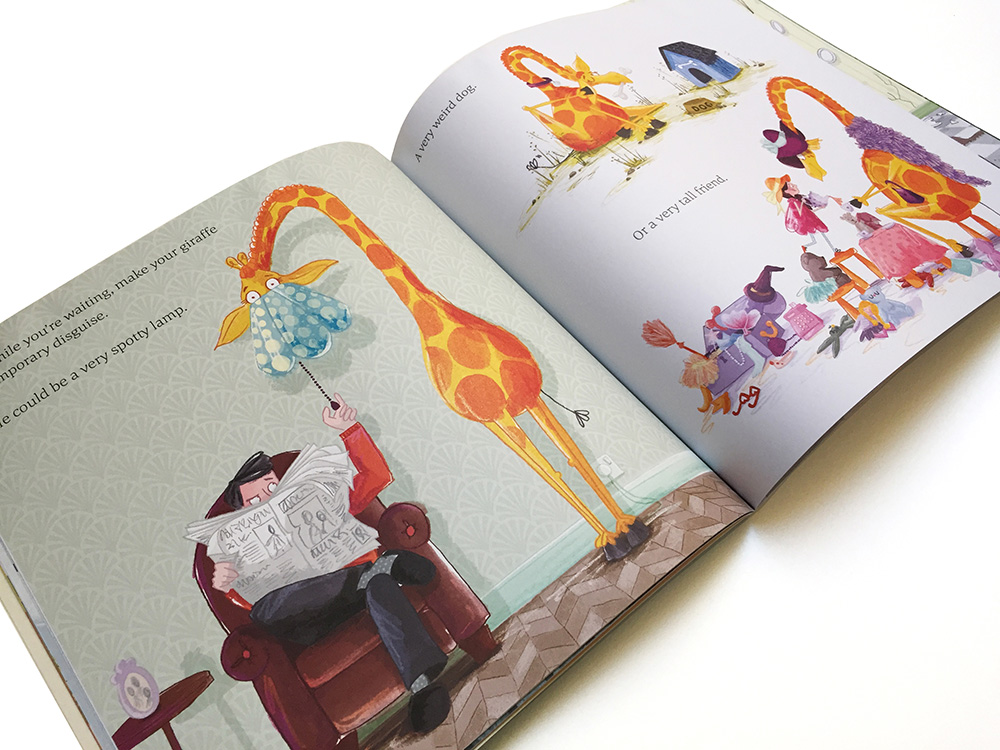 RM: And last of all, what are you working on at the minute?

CP: Oh lots! I’m doing three picture books this year with three publishers, and I’m also doing my first YA commission which is very exciting as it’s an area I definitely want to move into, alongside my picture books. The projects are all completely different and so I love each one for different reasons. They’ll all be out next year. The YA, if it sticks to schedule, is due to publish on my birthday which will make turning 39 more bearable!