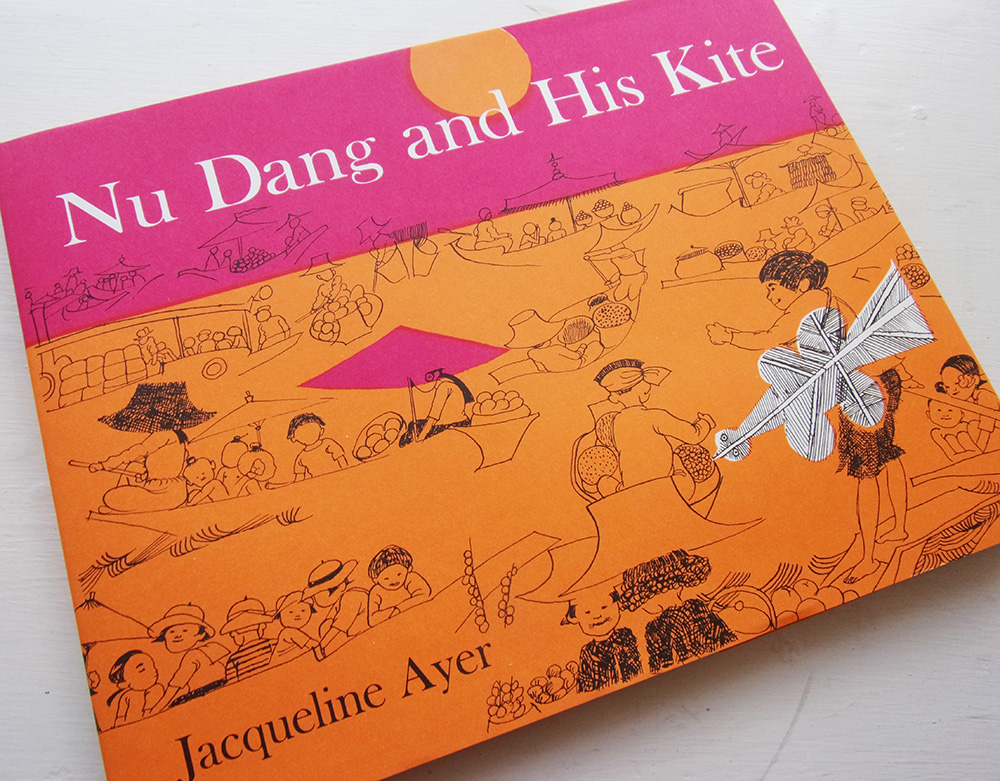 Early on this year I bought a second-hand copy of Little Silk, a 1970 picture book by Jacqueline Ayer just days before reading that the House of Illustration was organising an exhibition of her picture books and textile designs. Further still, the exhibition, Jacqueline Ayer: Drawing On Thailand, would be coinciding with a re-issue, the first in 60 years, of two of her celebrated picture books : Nu Dang and His Kite and The Paper-Flower Tree by Enchanted Lion Books. For me this down pouring of interest in Jacqueline Ayer’s Thailand-inspired books, resembled less the cold spring shower, than the monsoon rains after a long, dry summer, that brings old men out to dance in the street. 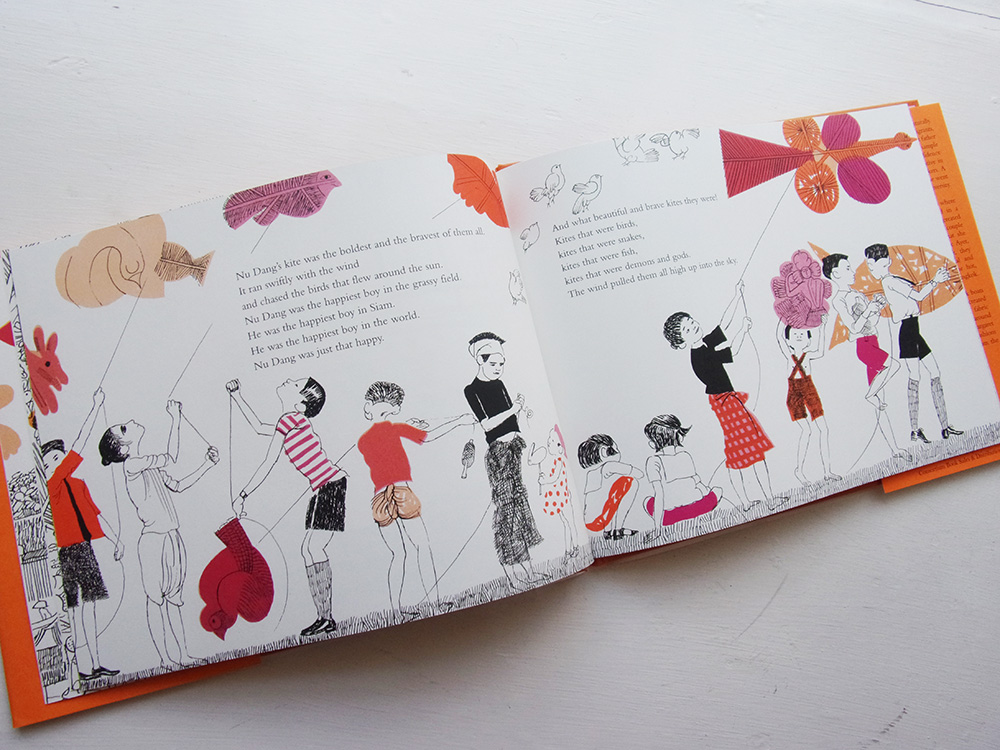 This was what Ayer did for a living. She could make grey skies blue – a specialist purveyor of the ‘young and gay’ whose optimistic illustration was much in demand in the fashion and style columns of leading American press in the 1950’s. She worked alongside Andy Warhol as a fashion illustrator for Bonwit Teller department store, US Vogue and The New York Times. A childhood friend, Milton Glaser thought great things about her and wrote retrospectively “Jacqueline Ayer was endlessly admired. What is always difficult to understand is the degree to which she was able to change every culture she was embedded in, from editorial pages to clothing design, to fabrics and children’s books.”

A childhood in New York in the 1930s, her parents Jamaican emigres, her adult life spent living between Paris, Bangkok and New York, Ayer was able to see far beyond the limits of countries and continents, she had experience of the world as a global community way before her time. Not as a privileged western observer but as an energetic creative, inspired by and contributor to the cultural life of the places wherever she was living. During her years passed in post-colonial Asia, Ayer as a black American, actively sought to live and work with respect for the people around her, as a collaborator rather than an exploiter. 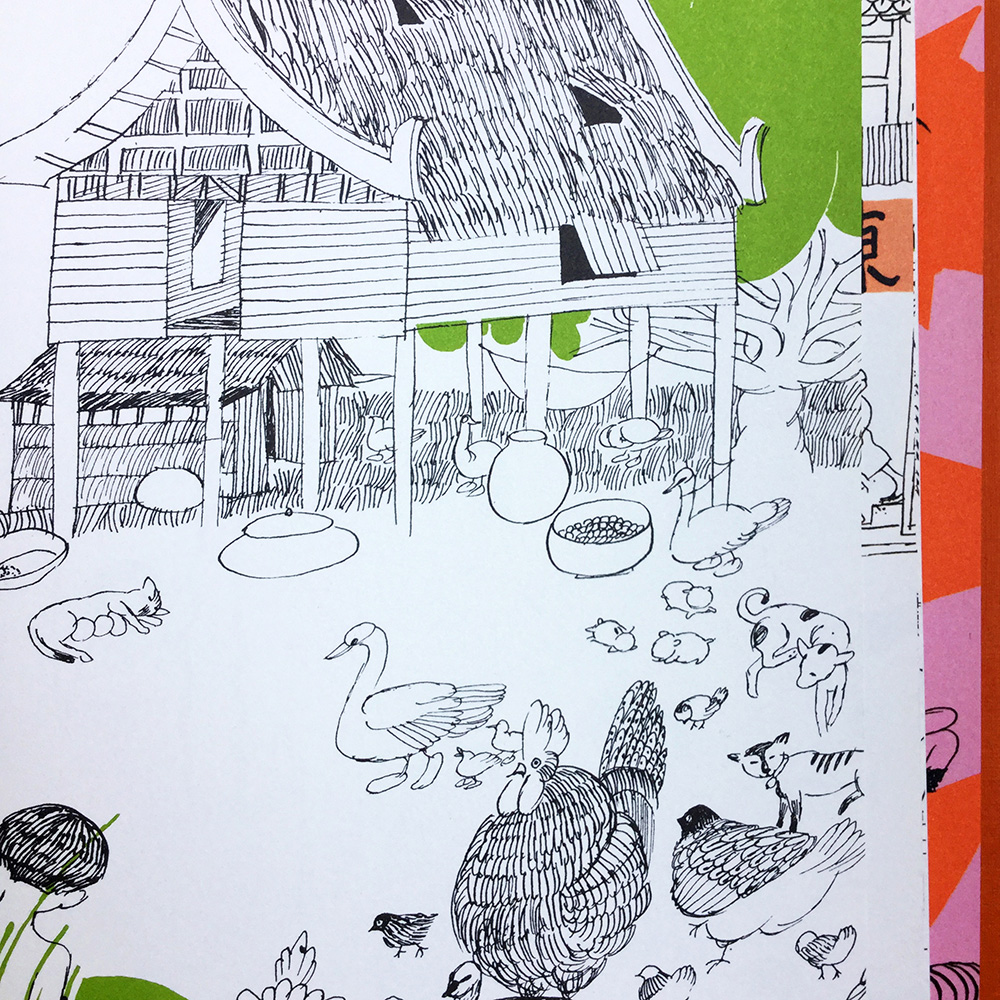 Her picture books, set out to give a form to her countless pen and ink drawings made travelling along the canals, in and around the markets, workshops, streets of Bangkok, capital of the recently-independent Thailand. Her young children became the impetus to tell a new story about hope for a better future. About the writing and illustrating of Nu Dang, Ayer wrote how it taught her that ‘the process had to engage my fervour and commitment, even with the reduced vocabulary of a four-to-six-year-old’. Her desire to show an as ‘accurate a picture as possible without romanticising’ gave rise to her reportage approach to representing scenes and the people within. These encounters, between Ayer and people like her, going about their daily lives, are recorded in numerous direct, intense portraits, contained in groups within the frames provided by, for example, the courtyard of a temple, a block of street food stalls, a group of boats on the river shore. 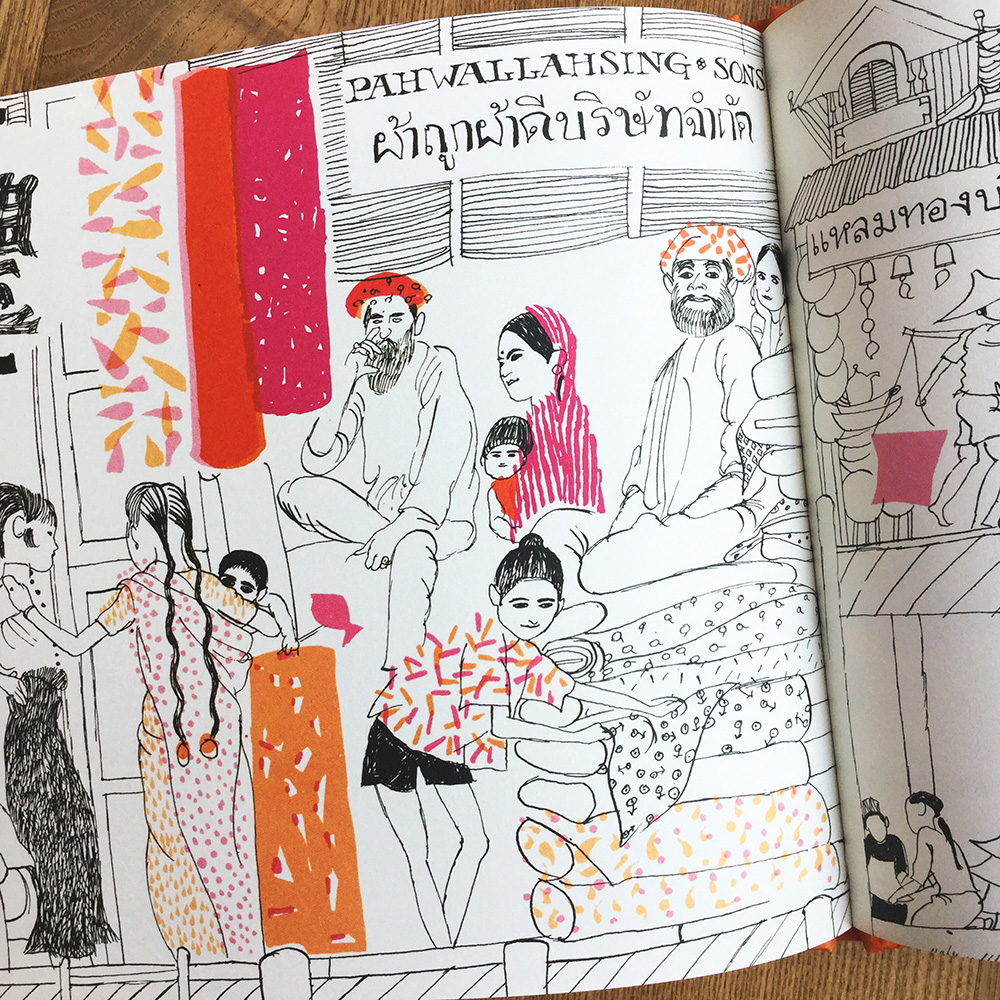 Often the picture composition is without a dominant centre of focus or hierarchy of importance, reflecting Ayer’s desire to become part of the picture herself, to be the eyes and voice of the people she met, lived and worked with each day going about her business. Her pen and ink sketches made on the way inform much of the detail used in the page designs redrawn in the studio. They display how well she understood body-form and how clothes are worn upon it, gained from her experience as fashion illustrator and increasingly as designer. 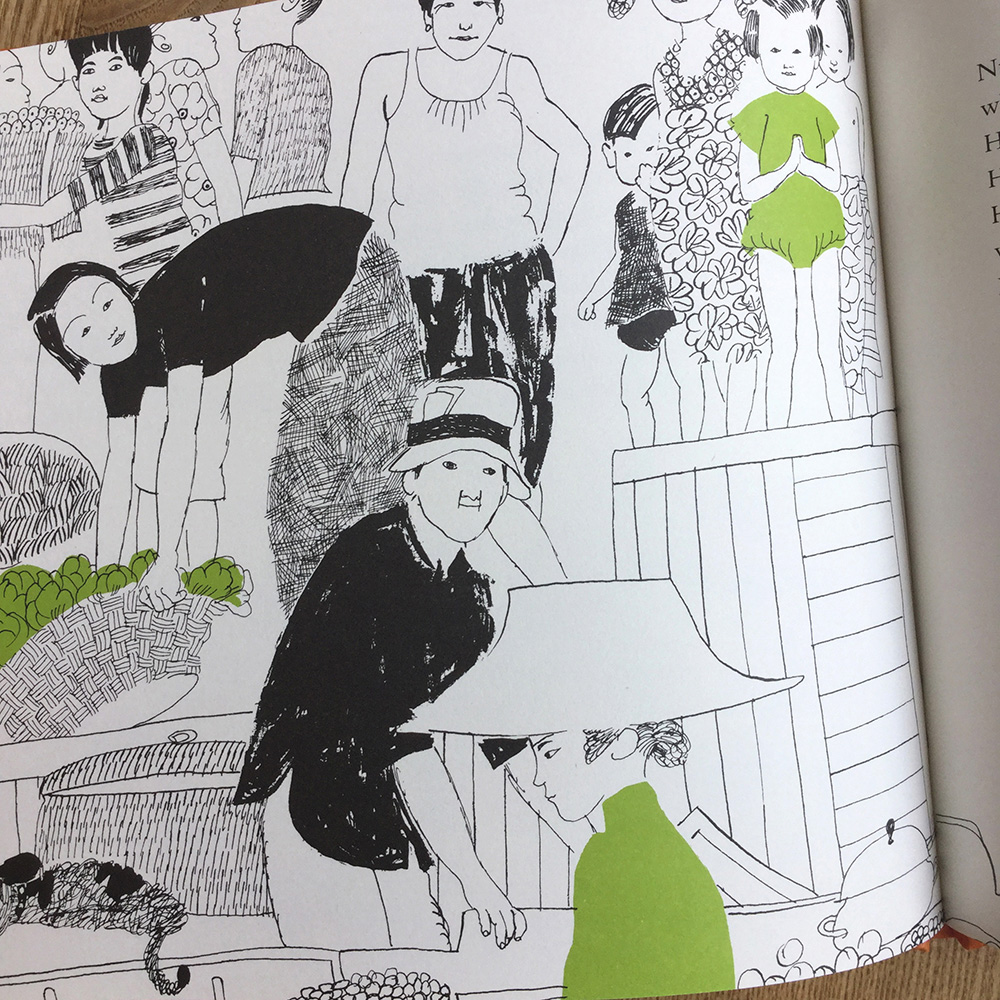 The short distance from the street provided by the studio allowed Ayer just enough space and time to enrich her reportage studies with other details, memories from tours around the city’s museums and art collections, of textiles, ceramics, devotional and popular imagery. Patterns, both woven and painted, inspired the bright, bold areas of flat colour which contrast with the areas of very finely detailed line drawing: part descriptive, part highly stylised pattern. Her designs are so successful at combining realism and decoration, because like the Thai artists and craftsmen whose work she so admired, her imagination was given free rein only when she felt her subject was sufficiently learnt by heart. The typically relaxed, joyful result is deceptively simple and the sign of the degree to which Ayer was able to distill the essence of her experience into the essential inflexions of her clear, line drawing and cut-out, collages of colour shapes.

Ayer’s enjoyment in the making of these illustrations is wholly expressed through Nu Dang who upon realising the source of his worldly happiness, abandons all other distractions that might hinder its pursuit. As a mirror to Nu Dang’s kite Ayer finds that creating a narrative from line and colour are what makes her truly happy, the happiest woman in Siam. 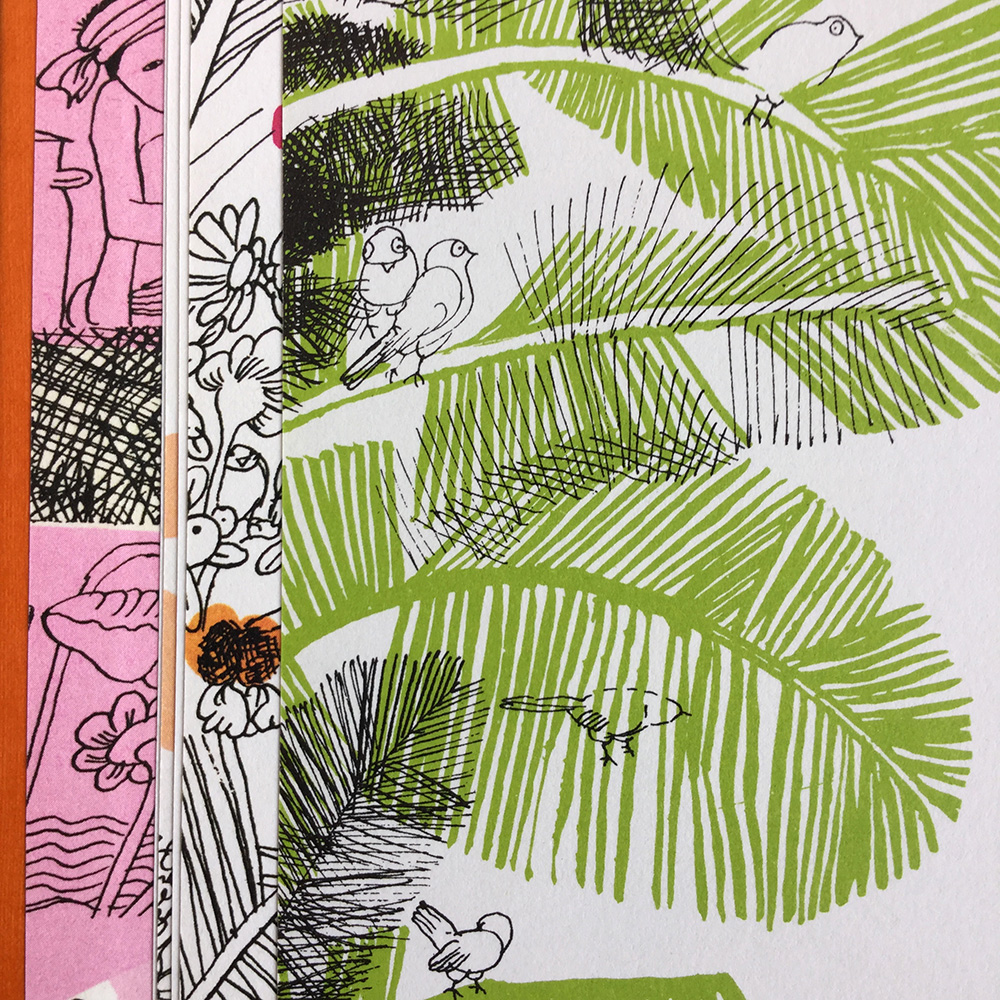 These reissued titles are incredibly close to the original editions in the quality of the printing that repeats the depth and brightness of the colours and finesse of Ayer’s line work. The orange cloth-covered book, embossed with a line drawing of Nu Dang and kite and wrapped in dust jacket, feels and looks like the real thing; that’s two books I won’t need to worry about tracking down on eBay.

The exhibition at the House of Illustration is deceptively modest in scale but contains an incredible variety of material relating to her lifelong career as designer of textiles, pret-a-porter fashion and books. However, the high quality of the different exhibits, posters, photographs, magazine spreads, original artwork, surpasses their relatively small number. The experience is intense, the original drawings are like miniatures, their colours almost fluorescent in brightness and the line work, given the incredible detail it contains, would be painful to look at were it not for the wonderfully relaxed, ‘young and gay’ nature in which it has been carried out.

The exhibition Jacqueline Ayer : Drawing On Thailand on at the House of Illustration until 22 Oct 2017.