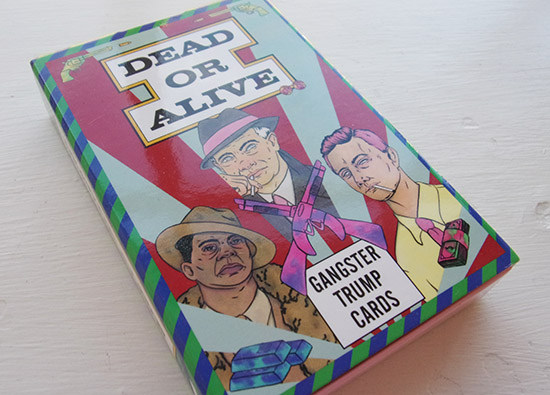 I am as obsessed with board and card games as I am illustrations and cartoons, so when I was asked to review Dead or Alive: Gangster Trump Cards I got very, very excited. Dead or Alive is effectively a game of Top Trumps using famous (or should that be infamous?) gangsters, gunslingers, goodfellas, felons, folk heroes and bad girls. 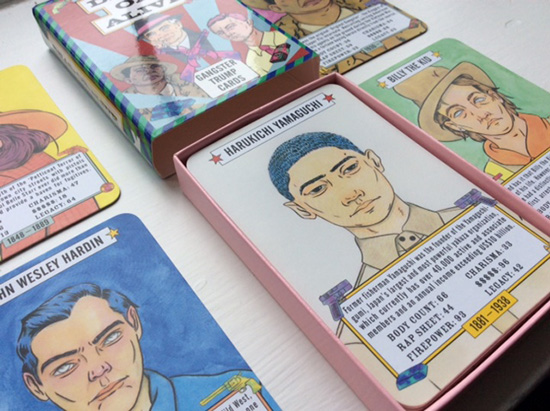 There are 34 cards in the box, 32 of which contain a unique villain to use in the game. If you have intercepted this blog from another planet other than Earth you may not be familiar with the concept of Top Trumps. Quite simply, each card contains a group of statistics and on your turn you take the top card from your pile, pick what you think is the most impressive statistic and read it out loud. Everyone compares statistics, and the player with the card containing the highest value of the statistic read out wins all the cards in play at the time, and so on and so forth. In this game there are some interesting facts about the infamous person, then six statistics to use in the game, including Body Count, Firepower and $$$$$. 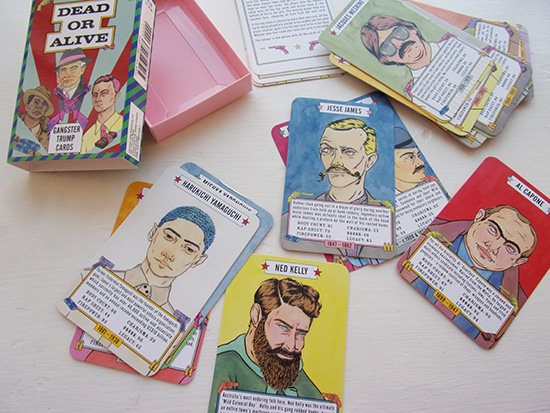 The cards are well made and of a standard size with a pleasing satin finish and rounded corners, all packed in a neat little tray inside an illustrated sleeve. However, it is the artwork which elevates this from a typical game of Top Trumps, to something akin to a shuffleable portfolio for the illustrator Adriana Bellet aka JeezVanilla. Each card has been lavishly illustrated with a portrait of the featured villain, and they have all been drawn and coloured very stylishly. Pinks and yellows are used in profusion, and the style has a combination of tight line and both flat and washed out colour to create a really effective result. This should not be a surprise when you consider that JeezVanilla has a very impressive portfolio and has already got a growing list of accomplishments under her belt. 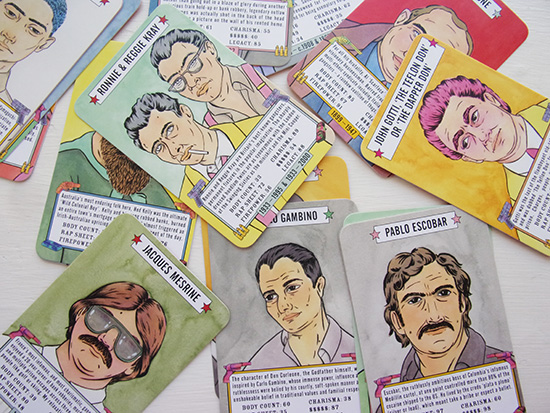 In this deck you will find villains of international renown such as the Kray brothers and Ned Kelly, along with many more I admit I had never heard of. It is an interesting and closely researched game, and will appeal to students of criminology as well as students of illustration. The likenesses are stylised but close enough to recognise who they are if you are familiar with them, although I expect my favourite Harukichi Yamaguchi never sported a blue hairdo in reality. He does have a Firepower rating of 93 out of 100 though, so I reckon that if he did nobody would laugh at him for it!

If you are a fan of Top Trumps, contemporary illustration or bad guys then this is well worth checking out. It is a well researched, well designed and beautifully illustrated product and a worthy addition to both my game and illustrators’ portfolios collections.