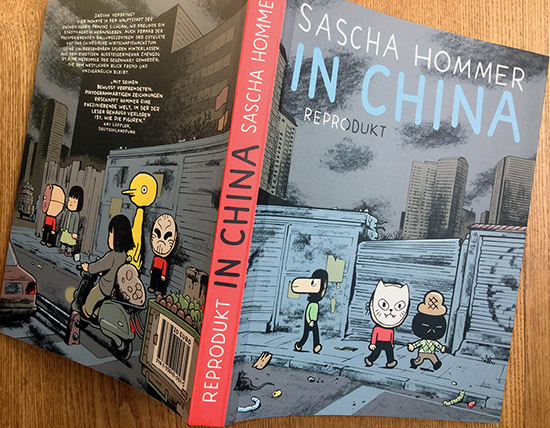 Sascha Hommer is a leading figure in the alternative comics scene in Germany. His work is both over and underground, spanning a wide range of collaborations, from regular comic strips in the national press (Frankfurter Rundschau) to his growing number of comics and graphic novels (Reprodukt). Based in Hamburg, he also works as a curator, freelance illustrator, educator and is currently organising the Hamburg Comic Festival.

In China is an auto-biographical account of Hommer’s longest stay (four months in 2011) in the megacity of Chengdu, the capital of the Sichuan province. Initially, it was a desire to compensate for the narrow, often politicised view of Chinese society portrayed in the German press around the time of the 2008 Olympic Games and the following Sichuan earthquake that motivated Hommer to undertake this project. Finally, the book turns out to be about something much more personal than this. In China describes Hommer’s alter-ego’s first steps towards finding some footing in an overwhelming series of interactions and experiences that he faces as a total stranger in a certainly different, possibly indifferent society. 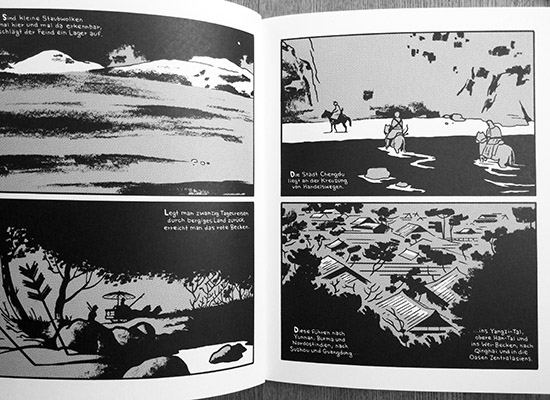 His attempts to communicate, understand and integrate are recounted through a number of characters, the narrator and his friends, who wear masks reflecting something of their exterior personalities whilst hiding their interior states. In this way Hommer is able to relate in various ways to his experience in a foreign land; physically he stands out in the crowd, linguistically he is without a voice, mentally he has no memories or experiences to draw on and to help him understand his environment. Each day holds part of the key that will enable him to express himself again as the person he knows himself to be but frustratingly he is devoid of all but very basic of means to connect with and participate in the exterior world. 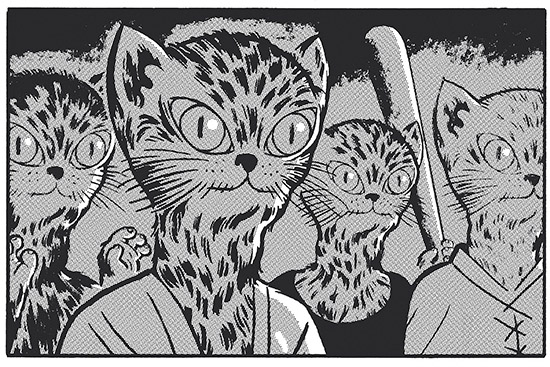 We follow his narrator through black and white illustrations that maintain a constant mood of half-light grey. Air pollution or the tourist’s inability to differentiate between the individual and the masses, to get beyond the appearance of things and to see real people, real lives. His drawings bear the sheer and constant weight of this dilemma, the daily fatigue of adjusting your perception to take on board each and every surprise. He describes the language classes he attends to help him overcome this cultural void. In this twilight zone, caught between what is perceived and what is real, Hommer’s mind at times escapes into moments of fantasy during which he attempts to place one within the context of the other. The tales he has been learning about China’s past are brought to life as a series of flashbacks in which Hommer attempts to link the past with the present; the rapid expansion of Chinese towns that has unrooted people and dropped them into a new dystopian model of urban society. 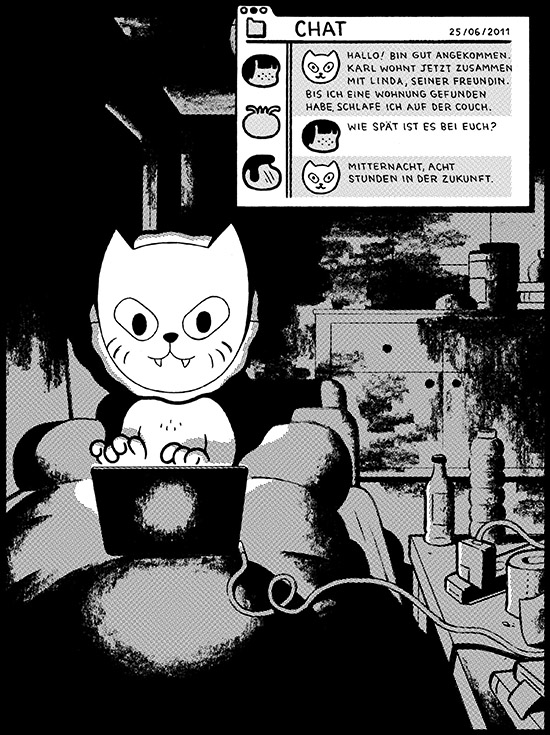 In China doesn’t draw conclusions about Chinese life, it doesn’t aim either to explain how things work. It sets out to describe an experience that is observed and non-judgemental, and personal and selective in equal measures that balance out many things: the design of the story, the density of the images, their weight, their mood, the understated nature of the dialogue and the banality of events, the mix of realistic and fantasy. Hommer explains that it draws upon the tenderness Miyazaki displays in My Neighbour Totoro and mixes it with a stark beauty that he likens to the eclectic music of Behold the Arctopus.

Hommer’s comic books are witness to the extent to which he needs a challenging framework to push him further in exploring new ways of developing a narrative, to reach new limits of technical ability. With In China, and its inherent theme of globalization, Sascha Hommer combines his technical and creative skills along with social realism and personal biography to make both a credible and incredible story for our times.

NB: Text is in German, but don’t go without, use online translation!

In China can be purchased for 20€ (+shipping) from Reprodukt here