Published by Top Shelf Productions an imprint of IDW Publishing

Sometimes there are two Americas. This has been said many times.

The American politician John Lewis was chairman of the Student Nonviolent Coordinating Committee (SNCC). He was one of the “Big Six” leaders of groups who organized the 1963 March on Washington, played many key roles in the Civil Rights Movement and its actions to end racial segregation in the United States. Today he is the U.S. Representative for Georgia’s 5th congressional district, serving since 1987.

Published in three parts this graphic novel helps the reader to understand the distinct phases of John Lewis’ career in activism:

– Book One: Lunch counter sit ins
– Book Two: Freedom Rides and the March on Washington (including Lewis’ most famous speech)
– Book Three: Voter Rights, 1964 US Election (The election of L.B. Johnson) and the 1965 March from Selma to Montgomery 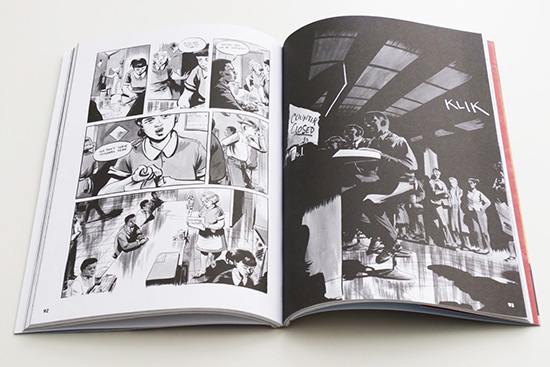 The novel begins with the Inauguration of Barack Obama’s as the 44th US President. This is used as a counterpoint for Lewis’ activities in his earlier life linked to desegregation and emancipation. These events take place from 1940 – 2009 during possibly the most extraordinary period of US history.

John Lewis as a young man is called to seek justice by the voice of God. He believes in non-violent protest at a time where universal hostility towards black people by the US system and the white population was the order of the day. It was a radical departure. Living by the simple notion that he must engage peacefully with people who feared change and denied the possibility that African Americans could ever be their equal. He and many others challenged the segregation of the American South that had existed since the abolition of slavery. The further South he travels the more he is drawn into the heart of darkness. 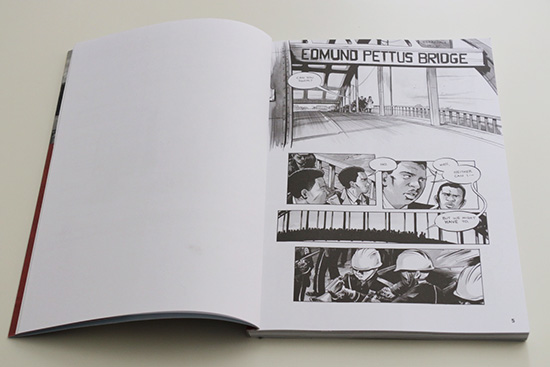 It is a tale of bravery and conviction at a time when one’s courage and beliefs could mean the loss of one’s job, personal injury, imprisonment or death. At this time the death of an African American was not a priority for investigators. The South was a place littered with victims of hatred and white supremacist ideology. It took the murders of white activists in Mississippi to bring the media running. It’s a story that suggests that things can improve, that ignorance can be overcome, that Government can make concessions and enforce the law. 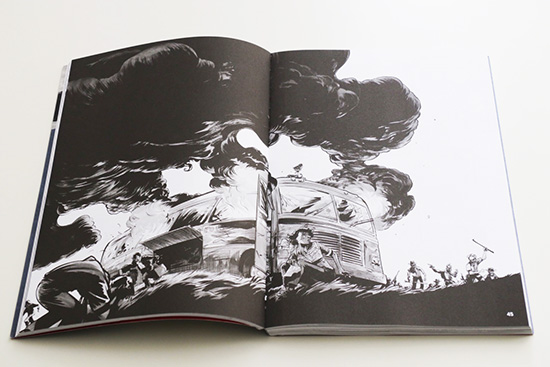 The black and white illustrations capture the period and the intensity of the movements in their desire for progressive change. The scenes of the Church bombing in Birmingham are vivid, and the expression of the dignity of oppressed peaceful protestors comes across well. These images set the scene for a world that revolved around the actions of CORE, NAACP, SCLC and SNCC. There were natural rivalries and divisions but these were mostly generational. All agreed that change was necessary – it was the speed of the change that fueled the debates.

John Lewis survived this tumultuous period despite others close to him paying the ultimate price. The message from the novel asks “What would you be prepared to do or risk for what is right?” The leaders Malcolm X and Martin Luther King Jr., opposites who became social activists rather than purely racial champions, both died for the same ideal.

It is said that the trilogy was given extra coverage and sales thanks to John Lewis’ spat with the 45th US President. For many the current US situation demands a return to the protests that shaped our present and may protect our future.