He emerges from the right corridor, grinning his way into the Garage Soho’s meeting room where I sit, awaiting my first Arrest All Mimics podcast interview with a Knight. “Is that Ben?” Sir John Hegarty deserves his title. 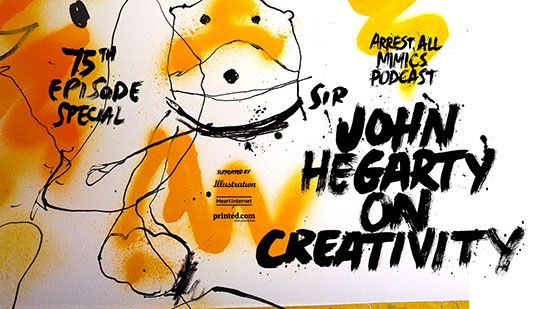 There’s endearing warmth and immediate authenticity about him that I’m certain has played a huge role in his success. Within moments of shaking hands, we’ve plunged feet first into the vast topic of creativity. For just over an hour, Hegarty (an AOI Patron) manages to take me down his rabbit hole and when I return, gasping for air, I feel like we’ve come pretty close to understanding everything there is to know about it.

“All my work stems from the belief that creativity is an expression of self,” he explains to me. “People say music is the greatest art form, but I say it’s second, behind life.” I feel like the kid who brought his homework in on time. I’ve become more and more obsessed with understanding the unique journey we all have and its symbiotic relationship with creativity. To hear it validated by a man with five times my professional experience, a founding partner of BBH, one of the world’s greatest advertising agencies, gives me a great rush of confidence. 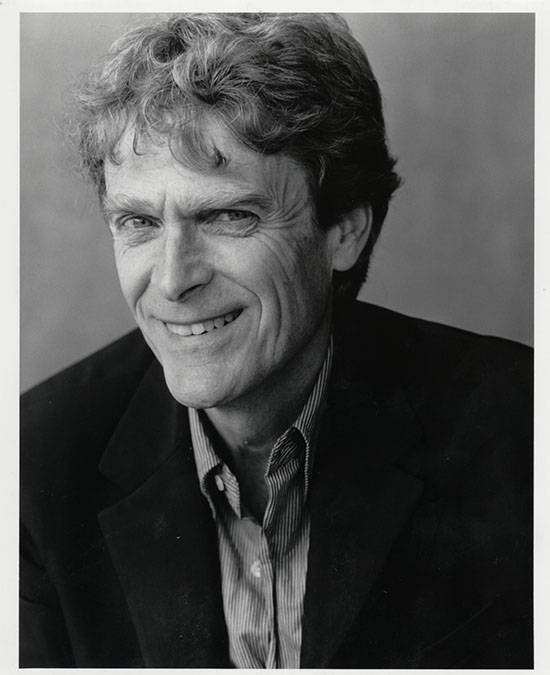 Expression of self is not simply doing what you want to do, more bringing yourself, that utterly unique and most powerful creative weapon to the work you choose to do in order to make it truly stand out. So many people in the creative industry spend too much time pandering to trends and a vague notion of what is expected of them by a client, lecturer or audience, when they need not. The greatest solutions to the identity riddle are always within. Sometimes they come so naturally, we miss them altogether.

Hegarty and I share the opinion that there is not enough risk in today’s creative industry. “With Flat Eric, they really thought I’d gone mad…” He tells me as he smirks, revealing the defined laughter lines of one who has had fun. Flat Eric, the yellow puppet he cast as the new hero of Levis commercials in 1999 was an act of irreverence, something John feels is essential to creativity. He admits it was a gamble, but one he had faith in. It paid off. 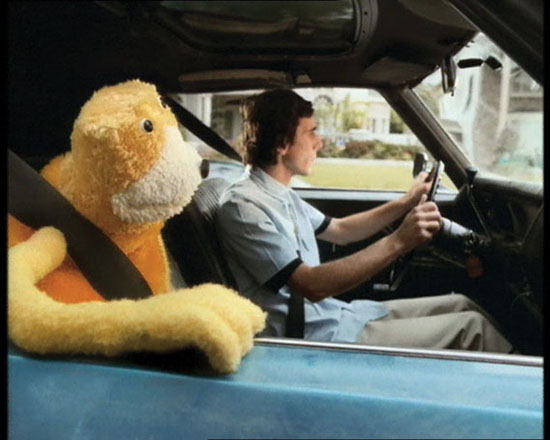 As he recounts this amongst other instances where he had to fight for an idea, I sit back and bask in his glow. If we’re not enjoying our work, looking to be remembered and refusing to settle for tired, safe ideas, why are we in this dog-eat-dog industry? I doubt many of us arrived at college fantasizing about working on something we do not care about only to pay the bills.

“You’ve got to be prepared to challenge your own thinking, what you’ve done before. That’s the harshness of a creative career,” he tells me, looking slightly more serious now. “You’ve got to be fearless! You have to have faith in the creative work you’re doing.” He’s right, but it takes a certain tenacity to break through the fear of those holding the cards.

I think back to posters that felt just as epic as the film they promoted, adventurous album covers from my youth that broke from what had gone before and captured a piece of time and culture, perhaps missing from mainstream music today, and of course, bold advertising campaigns that got people talking in the street, becoming a part of pop culture.

Subservience and gentle existence do not breed that kind of impact. These were the acts of raw creativity that attracted me to art-college and then a career as an illustrator. Now, it’s the reason I host a podcast, wrote Champagne and Wax Crayons, continue to assign myself a daunting schedule in order to stay sharp, challenged and progressing.

Hegarty perfectly articulates the instinctive beliefs. “Without being enthusiastic, you won’t be truly great at something,” he states and don’t I know it. It’s often a long, winding road, filled with obstacles and things we’d rather not do, but the enthusiasm and drive to get past them has to be self-made, a by-product of leading fiercely with the things that speak to us, awakening the inner child. We all need to make money, but to become trapped by necessity is catastrophic. 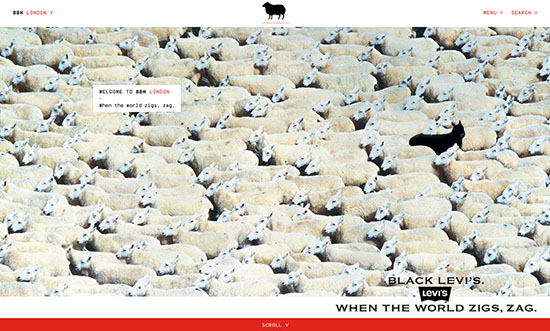 I need to feel my hairs stand on end, a pure desire to get out of bed in the morning. Everything I’ve done that I consider an achievement in the arts has happened to some degree because I wanted to create the magic that John speaks of. Even in the busiest of weeks, I made time for attempted wizardry.

In front of me sits a man interested only in ideas, creativity, a maverick who is not afraid of ruffling a few feathers. Even now, after decades of hard work, the passion with which he speaks is infectious. It’s hard to imagine the man retiring, an idea that is also alien to me. “My son says I’m more like a mascot these days…” he laughs, suggesting his role at BBH is less involved than it once was. The example of creative thinking John Hegarty has set down for me is a giant one, but it’s important I don’t stand back in awe too long. It’s up to my generation to make sure we pick it up and harness the spirit to challenge conventional thinking.

Ben Tallon is a freelance illustrator, author of Champagne and Wax Crayons: Riding the Madness of the Creative Industries and host of Arrest All Mimics, the Original Thinking and Creative Innovation podcast.

He works with WWE, EMI, Channel 4, The Guardian and The Premier League among others.