A. Richard Allen is announced as winner of the Moira Gemmill Illustrator of the Year prize at the 2017 V&A Illustration Awards

A. Richard Allen has been announced as the winner of the Moira Gemmill Illustrator of the Year prize, and winner of the Best Editorial Illustration, for Trump Wave, a satirical homage to Katsushika Hokusai’s Great Wave off Kanagawa, in a ceremony hosted by V&A Director Tristram Hunt at the V&A Museum. Based in Bournemouth, Allen studied at Central Saint Martin’s College and practices as an illustrator and painter with clients including The Sunday Telegraph, The Guardian and The New Yorker. The judging panel praised his use of Hokusai in a contemporary context “to invoke echoes of the past to reinforce the reality that history matters”. 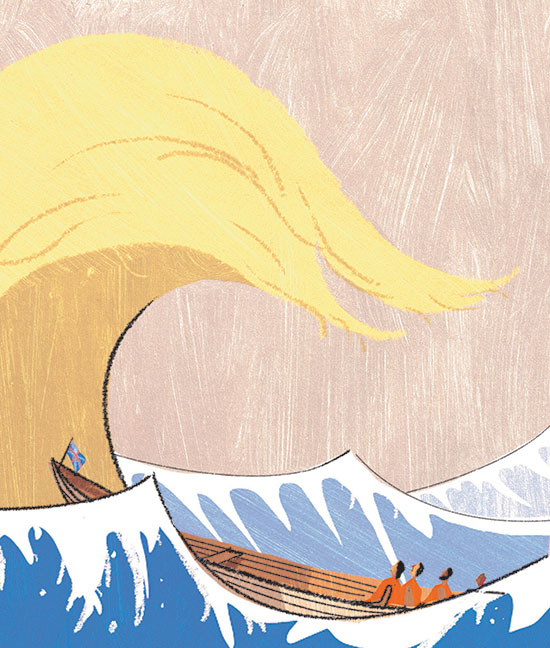 Winners of the 4 categories of the 2017 V&A Illustration Awards:

The prize money for each of the four awards categories is £3,000, and the Moira Gemmill Illustrator of the Year Prize is worth an additional £5,000. The student runner-up prize is worth £2000. All the winning artworks will be displayed on the landing outside the National Art Library from 17th May – 20th August 2017.

Speaking after the ceremony, V&A Director Tristram Hunt said: “The V&A’s Illustration Awards is rooted in the V&A’s founding purpose, to celebrate and promote the highest standards of creativity. This prize shines a light on our illustration industry and supports the emerging talent of tomorrow through the Student Illustrator of the year prize. The extraordinary response to our competition is testament to the buoyancy of the creative talent we have here in the UK, so I’m delighted that the V&A will display all the winning artworks in the Museum for everyone to enjoy.”

This year’s shortlist was drawn from over 800 submissions. The competition has been running since 1972. Previous winners of the Illustration Awards include Sir Quentin Blake, Ralph Steadman, Posy Simmonds, Sara Fanelli, and Yasmeen Ismail.