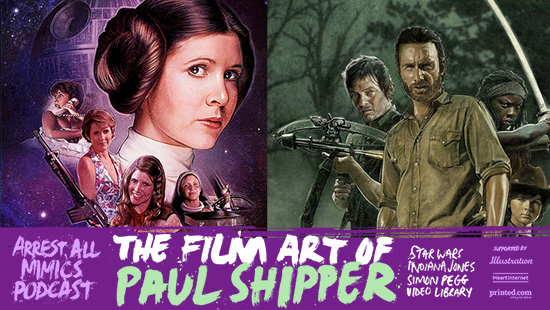 AOI Member Paul Shipper’s film and TV artwork began with movie posters on a bedroom wall and inspiring trips to the video library in Manchester. His contemporary twist on a classic era of movie posters has earned him a following comprised of both cinema fans and industry icons alike.

He joins Ben Tallon to discuss the journey, from being wowed by the artwork from such timeless films as Star Wars and Indiana Jones as a boy to joining Simon Pegg for movie premieres.

Paul also discusses why digital is not a dirty word, his Carrie Fisher tribute illustration for Empire and upcoming Star Wars work.

Listen now and get your thoughts over on Twitter @arrestallmimics now!